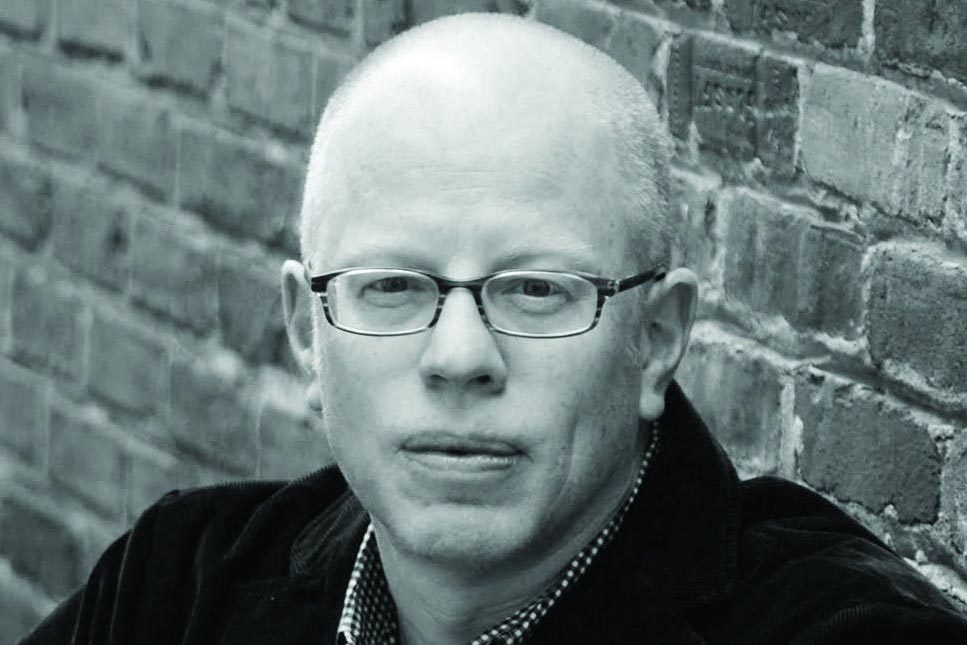 Mark Saunders joined the marketing department of UVA Press in 1995 and became director in 2013. (Photo by Jen Fariello)

Mark Harril Saunders, who served as director of University of Virginia Press, died of a heart attack in Charlottesville on May 18. Described by his colleagues as “a true renaissance man,” he was 52.

A memorial service will be held Friday at 2 p.m. at St. Paul’s Memorial Church on University Avenue.

Saunders joined the marketing department of UVA Press in 1995, where he eventually became director of marketing and sales and, in 2013, UVA Press director. He had previously worked at Columbia University Press.

A dedicated leader within the Association of University Presses, Saunders was “a pillar within the publishing community,” his UVA Press colleagues said in announcing his passing. “His great expertise and unique and remarkable character will be profoundly missed and inspire us always.”

“Mark devoted his entire career to publishing the highest-quality scholarly books, and was much beloved throughout the university press community,” Eric Brandt, assistant director and editor-in-chief, said. “His intelligence, innovation and kindness have made UVA Press a leader in digital publishing, and his devotion to UVA and Charlottesville was without parallel. He will be sorely missed.” 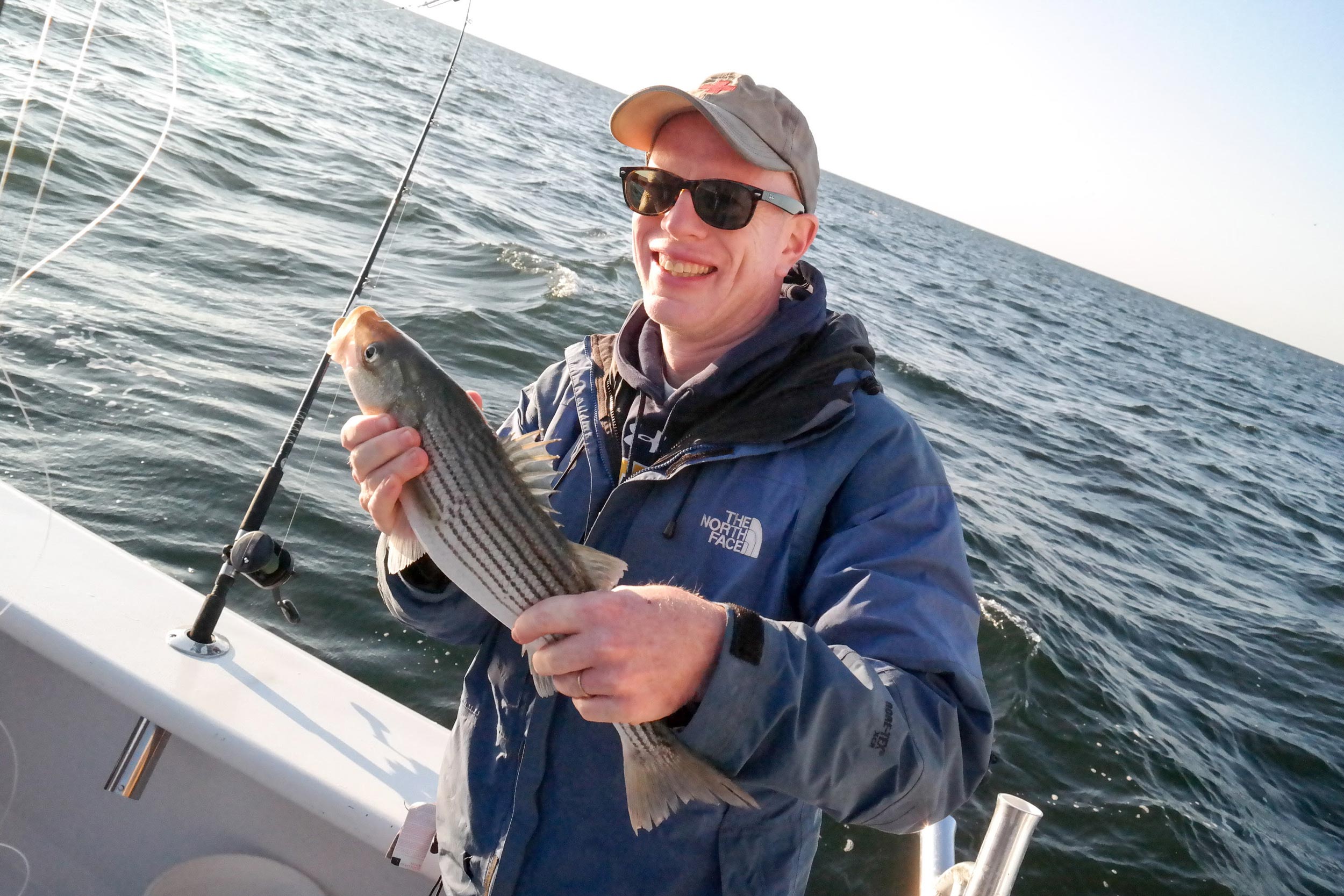 Peter Hedlund, director of Encyclopedia Virginia, took this photo of Mark Saunders in 2015 after he caught a striped bass, or rockfish, on their annual fishing trip in the Chesapeake Bay. (Contributed photo)

“The loss of Mark Saunders is devastating,” outgoing chair of the UVA Press Board Suzanne Morse Moomaw wrote in an email. “Mark was a thoughtful leader who believed in the power of ideas expressed through many media. His creative energies allowed the Press to be innovative and entrepreneurial while maintaining the highest standards for excellence in the academic publishing world. But beyond his professional life, Mark was a genuine and gentle person who made the world better by his presence,” wrote Moomaw, an associate professor in the UVA School of Architecture’s Department of Urban and Environmental Planning.

Among Saunders’ many notable achievements at UVA Press was his central role in establishing its Rotunda electronic imprint in 2001, which put the press at the forefront of innovation in digital scholarship. He became manager of the project in 2004. Rotunda features digitized collections from the American Founding Era, in architecture, and in literature and culture.

In a 2013 profile of Saunders in Against the Grain, a publication for publishers, book vendors and librarians, he named establishing Rotunda – “with a whole lot of help” – as his most memorable career achievement.

He also predicted, “While the core values of university presses and what they add to the creation of new scholarship will remain, I think that our community will see a great deal of integration, adoption of shared services, and collaboration with other entities within the next five years.”

As an example, last year the UVA Press and the University Library created a new digital publishing partnership, Aperio, that employs the latest technology to produce “open access” to research, scholarship and other educational materials – eventually including textbooks.

Saunders was also an accomplished author. A Henry Hoyns Fellow in UVA’s program in creative writing, from which he earned an M.F.A. in 1997, his novel, “Ministers of Fire,” was published to great acclaim in 2012 by Swallow Press, an imprint of Ohio University Press.

Spanning China’s alliance with the U.S. during the Soviet Union’s war in Afghanistan to the aftermath of the Sept. 11, 2001 terrorist attacks, “Ministers of Fire” follows the mid-life career of a fictional CIA station chief and his involvement with the fate of a Chinese dissident. The Wall Street Journal named it one of the top 10 mystery novels of 2012, and the Washington Post listed it as one of the 50 notable works of fiction of the year.

Saunders’ short stories and essays appeared in the Virginia Quarterly Review, Blue Moon Review, Boston Review and the Norfolk Virginian-Pilot. In 2001, he was awarded the Andrew Nelson Lytle Fiction Prize from Sewanee Review.

English professor Lisa Russ Spaar said she remembered Saunders from the first M.F.A. class she shepherded through the program as director in 1995. She wanted to highlight “what a discerning reader and elegant writer he was. He brought wit, worldly experience and a generosity of spirit and talent to our program in the 1990s, when our star as a program was really rising. He was part of making that happen,” said Spaar, who has become director again.

Born and raised in the D.C. area, Saunders and his family traveled frequently, due to his father’s career as a diplomat – in Europe, the Middle East, Russia and China. He earned his bachelor’s degree from the University of Pennsylvania and then moved to New York City.

In addition to work, traveling and writing, his passions included carpentry, the outdoors, boating, his house in Maine and all things sports. He was an avid reader who could discuss everything from the arts to politics, and a devoted father, who coached his three children.

“When he became a father,” Spaar said, “he would bring his daughter Binx by the creative writing lounge to play on the typewriters and with the label maker – ancient artifacts!”

A close friend of his for nearly 18 years, Peter Hedlund, who directs the Encyclopedia Virginia project at Virginia Humanities, said he last spent time with Saunders watching the UVA men’s basketball team win the NCAA Championship. “It was an incredibly joyful moment and a perfect memory of Mark to hold onto,” Hedlund said.

“I watched lots of UVA basketball games with Mark, turned to him for career advice, went to concerts with him, ate lots of his chili and loved seeing his kids grow up. He loved books, cars, music and sports, but most of all he loved his kids,” Hedlund wrote in an email.

Saunders is survived by his wife, Robin Stafford, and three children, Binx, Wardy and Harry.