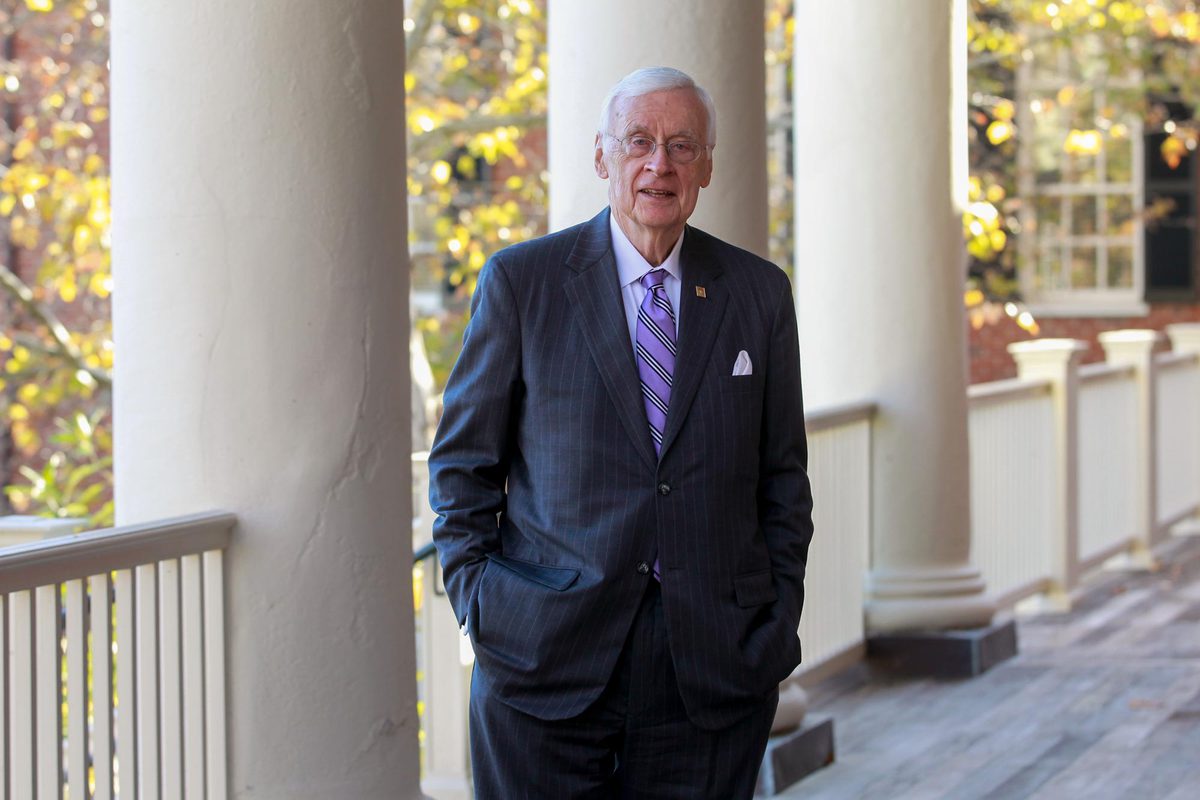 After a four-year battle with cancer, Gerald Baliles – the 65th governor of Virginia (serving from 1986 to 1990), a champion of education and an alumnus of the University of Virginia’s School of Law – died Tuesday morning in Charlottesville at age 79.

“In the commonwealth, we knew Gov. Baliles as a public servant of the highest caliber, working on behalf of all Virginians,” Miller Center of Public Affairs Governing Council Chair Alice Handy said. “Here at the Miller Center, we also knew him as our former director and we knew him as a friend.”

The governor led the Miller Center – a nonprofit affiliate of the University, dedicated to presidential scholarship, public policy and political history – from 2006 to 2014.

“Jerry brought wisdom and integrity to everything he did,” current Miller Center Director Bill Antholis said. “His record of service to the commonwealth and the nation is extraordinary. His commitment to the University and the Miller Center set the standard that we all strive to maintain. The governor’s wife and family are in our thoughts and prayers.”

UVA Center for Politics Director Larry Sabato, a professor of politics who followed Baliles’ career since the 1970s, called him a bipartisan leader with an exceptional record of success. The center produced a 2003 documentary about Baliles and in 2002 held a conference focused on his governorship.

“He was an outstanding governor, and both Democrats and Republicans will say that,” Sabato said. “He achieved a great deal in transportation, in access to higher education and in the environment, especially the cleanup of the Chesapeake Bay, something he continued after he was governor.

“He did not waste a day as governor; that is what I remember most. He was very much a statesman, and the kind of political leader we don’t see very often, especially in this era.”

Born in Patrick County in 1940, Baliles attended Wesleyan University and the University of Virginia School of Law. He was elected to the Virginia House of Delegates in 1975. Six years later, he was elected attorney general of the commonwealth. During his term he was chosen as the Outstanding Attorney General of the U.S. by his peers. He won the Virginia governorship in 1985, earning 55% of the vote.

A look back on his life and career reveals a steadfast dedication to public service. His term as governor featured a particular focus on education – culminating in an historic National Summit on Education, held at UVA in 1989. That event featured the meeting of then-President George H. W. Bush and then-Arkansas Gov. Bill Clinton.

During his governorship, he also made notable strides in transportation, competitiveness and environmental protection.

After serving in Richmond, Baliles went into private practice at Hunton & Williams (now Hunton Andrews Kurth) and also was appointed by President Clinton as co-chair of the National Commission to Ensure a Strong Competitive Airline Industry.

In 2006, Baliles was recruited to serve as director and CEO of the Miller Center, where he served until Dec. 31, 2014. While leading the Miller Center, Baliles compiled an impressive record of achievements – and the nation continues to reap rewards from his hard work.

Most notably, he established the National War Powers Commission, co-chaired by James Baker and Warren Christopher. The group developed a proposed revision of the War Powers Act, which was submitted for consideration by U.S. Sens. Tim Kaine and John McCain. Baliles initiated the David R. Goode National Transportation Policy Conference, which led to a commission report presented to President Obama in the White House Rose Garden. Baliles also oversaw a series of other commissions on competitiveness, entrepreneurialism, health policy and higher education. And he kicked off a national discussion and debate series (broadcast on ABC News and PBS) and created the “American Forum” television program, which ran for six years.

Baliles also oversaw the publication of more than a dozen transcript volumes from the John F. Kennedy, Lyndon B. Johnson and Richard M. Nixon White House tapes, the release of four narrative works based on those tapes, and the establishment of the Presidential Recordings Digital Edition for the further publication of Miller Center scholarship on the tapes.

In 2018, the Miller Center established the Gerald L. Baliles Professorship in Presidential Studies to honor the governor’s service and dedication to the organization and to promote nonpartisan and pragmatic study of the institution of the presidency.

“To have an endowed chair is the highest honor a professor can have,” said Miller Center Director of Presidential Studies Barbara Perry when she became the first to hold the title. “I have had two chairs previously, but this is the first I’ve had that is named for someone who not only hired me at the Miller Center, but whom I considered to be a mentor and friend.”

Funeral arrangements will be announced at a later date.