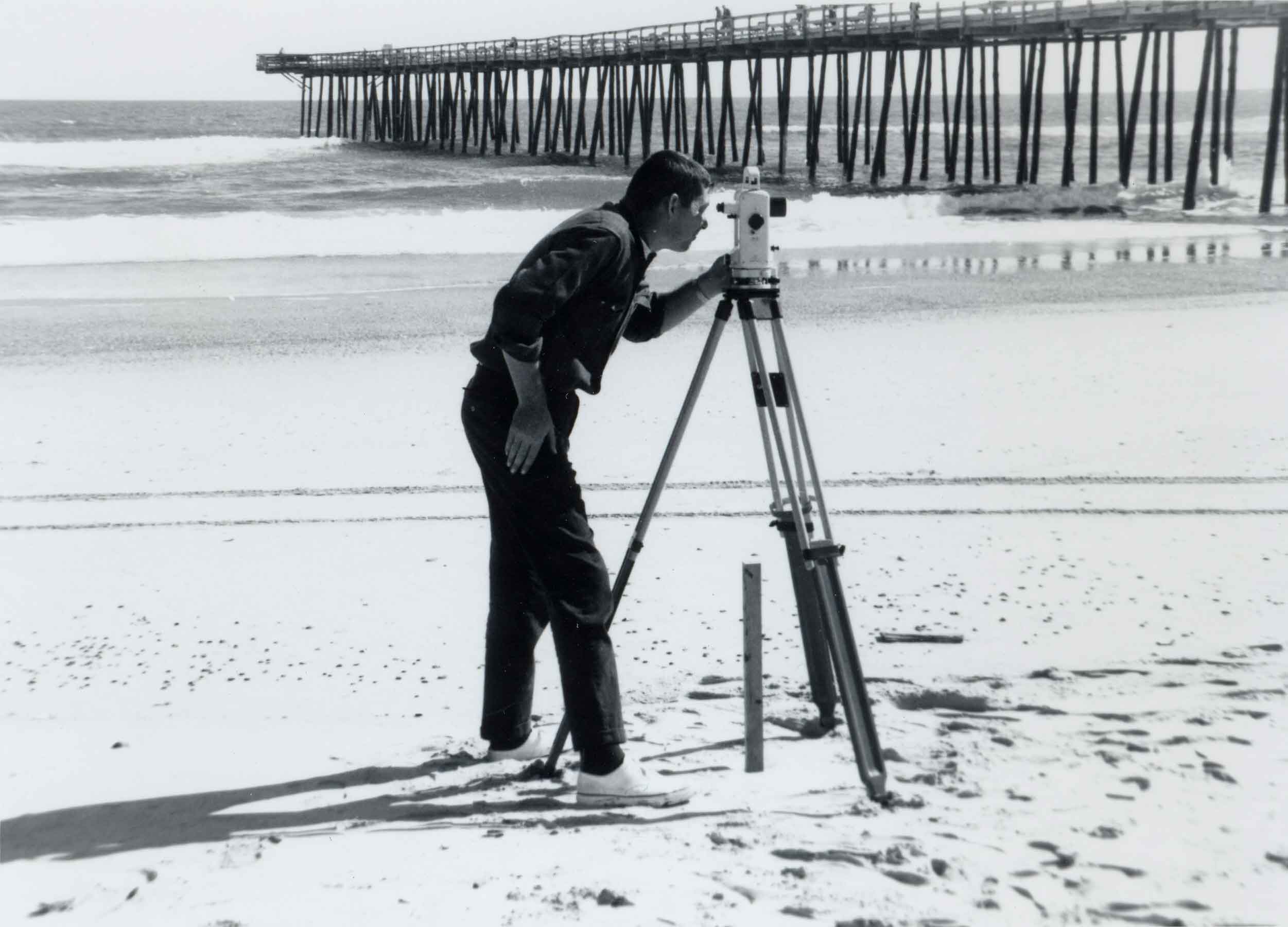 Robert Dolan, one of the founding professors of the University of Virginia’s Department of Environmental Sciences, died April 24 in Charlottesville at the age of 87. He studied the power of the ocean and overturned a long-held idea about North Carolina’s Outer Banks and other U.S. barrier islands. Over the years, he brought generations of students to the Outer Banks to share his expertise and enthusiasm.

Dolan, who joined the UVA faculty in 1965 and worked here almost 50 years, co-founded the interdisciplinary Department of Environmental Sciences in late 1969 – the first in the nation to offer degrees from bachelor’s to Ph.D. in the new field.

Along the way, he taught and mentored thousands of students, taking a group of about 30 to Nags Head, North Carolina each fall to conduct hands-on experiments. He influenced many students toward professional lives working in coastal sciences. A passionate and dedicated instructor in the classroom, he received the UVA Alumni Association’s 1991 Distinguished Professor Award.

“I had the pleasure of teaching ‘Coastal Processes’ with Bob Dolan on a number of occasions,” said Patricia Wiberg, a professor and departmental colleague. “He loved to teach and took a personal interest in the success of his students. Among his gifts was the ability to weave science, policy and case studies into memorable stories that made the material come alive.”

He began conducting the groundbreaking research he became known for in 1959 during his doctoral work. Scientists previously thought hidden coral reefs must anchor the Outer Banks, but Dolan found no such evidence when he drilled holes in 140 places along the length of the barrier islands; instead, he found only more layers of sand. That discovery explained why the barrier islands on the Atlantic Coast didn’t wash away as waves and storms continually pounded the shore. They just kept shifting. 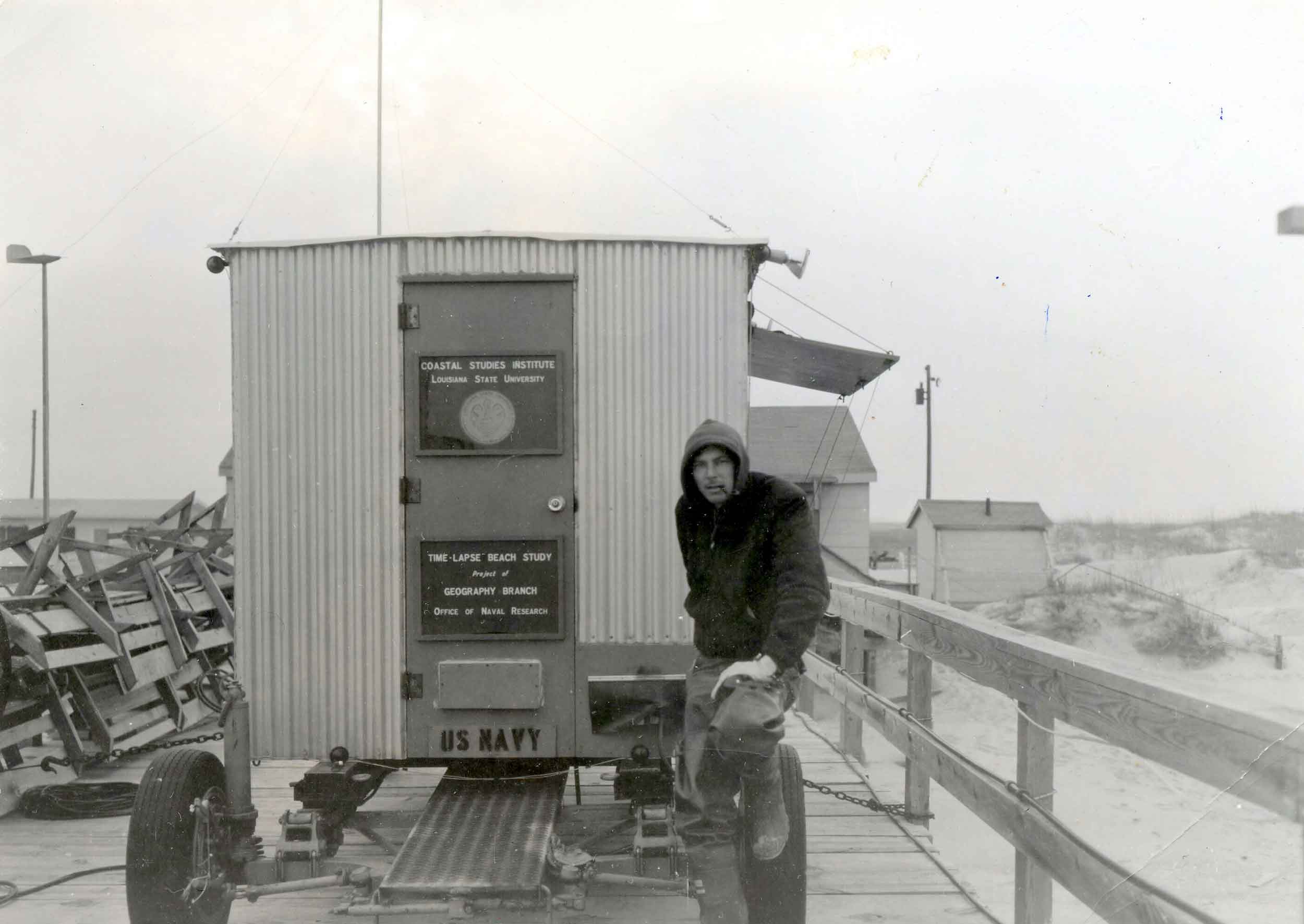 Not long after Robert Dolan set up a trailer with research equipment on Seaport Pier, a huge nor’easter pounded the barrier islands of North Carolina.

The 1992 book, “Ribbon of Sand,” published by John Alexander and James Lazell, quoted him for the title, taking it from his description: “The Outer Banks are nothing but a little prism, ribbon of sand, and it’s only about 30 feet thick.”

He was immortalized in several books about the region, especially ones covering the Ash Wednesday Storm of March 7, 1962, which the U.S. Geological Survey called one of the 10 worst storms of the 20th century. Without the technology used today to track the weather, the early morning nor’easter came as a surprise. In the Time-Life book “Edge of the Sea,” author Russell Sackett recounts what Dolan saw:

He arose at 6:30 a.m. and as he prepared to shave he peered casually through the bathroom window to check the weather conditions. He promptly forgot about shaving: The foundation of their cottage was awash in about two feet of churning water, and the neighboring cottage was afloat, “moving right toward us.”

After taking his wife and baby daughter to safety, Dolan, having one of the only four-wheel drive vehicles in the neighborhood, rescued several nearby families to the safety of Roanoke Island. As soon as he could, he checked on the Seaport Pier, where he had a trailer with research equipment. Remarkably, the trailer was still perched on the only section of the pier not destroyed and washed away. He was able to locate a gauge mounted on a piling that registered a wave height of 18 feet before the electric power failed. 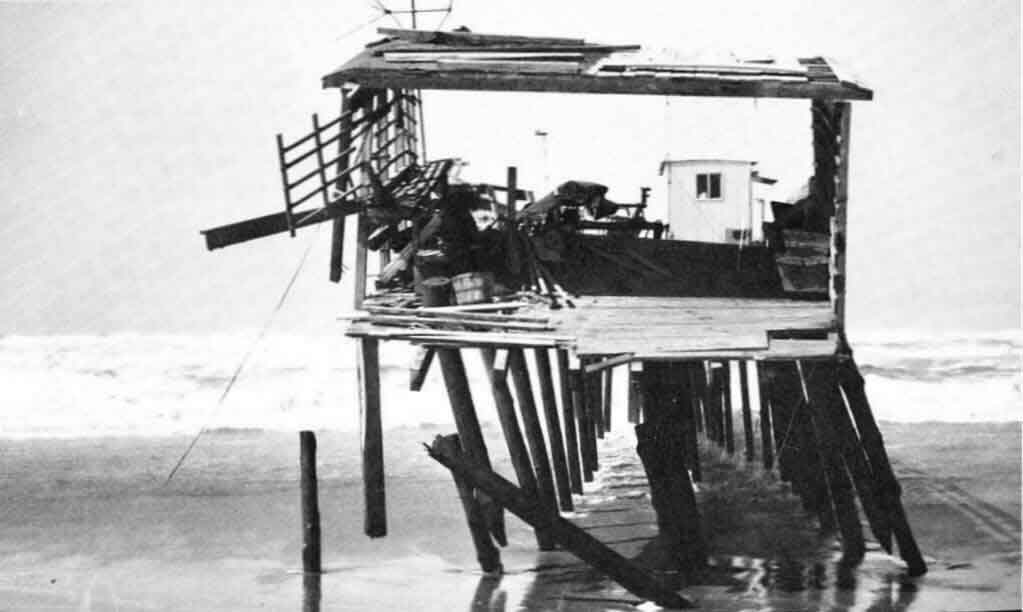 The March 1962 storm washed away most of the Seaport Pier – except where Robert Dolan’s research trailer stood.

“The Ash Wednesday Storm washed over Bob Dolan with the force of revelation,” Sackett wrote. The storm demonstrated how the battered islands shifted and recovered quickly. Dolan became convinced that overwash was the dominant pattern in barrier island geology, and that human attempts to build up artificial dunes to block the ocean’s advance were futile and counterproductive. His discovery helped to establish new policy for the U.S. Army Corp of Engineers and the U.S. Department of Interior.

Dolan would go on to develop, with climatologist Robert E. Davis, the Dolan/Davis scale, much like that for hurricane intensity, to measure the intensity of nor’easter storms, based on the combination of wave height and duration of the storm. The 1962 storm ranked a 5 out of 5.

During his 49 years at the University, Dolan published more than 200 articles and studies, including cover stories in Science and Scientific American magazines. He conducted research for a range of governmental offices, including with NASA to predict the Martian geography in preparation for the 1975 Viking missions to Mars.

He is survived by his wife, Brenda and their daughter, Rebecca; by two sons, Patrick and Michael, and another daughter, Kelly D. Lippard, with his late wife, Patricia; and three grandchildren.

A memorial service will be held at a later date.

In Memoriam: Life of Drama Professor To Be Honored Sunday END_OF_DOCUMENT_TOKEN_TO_BE_REPLACED