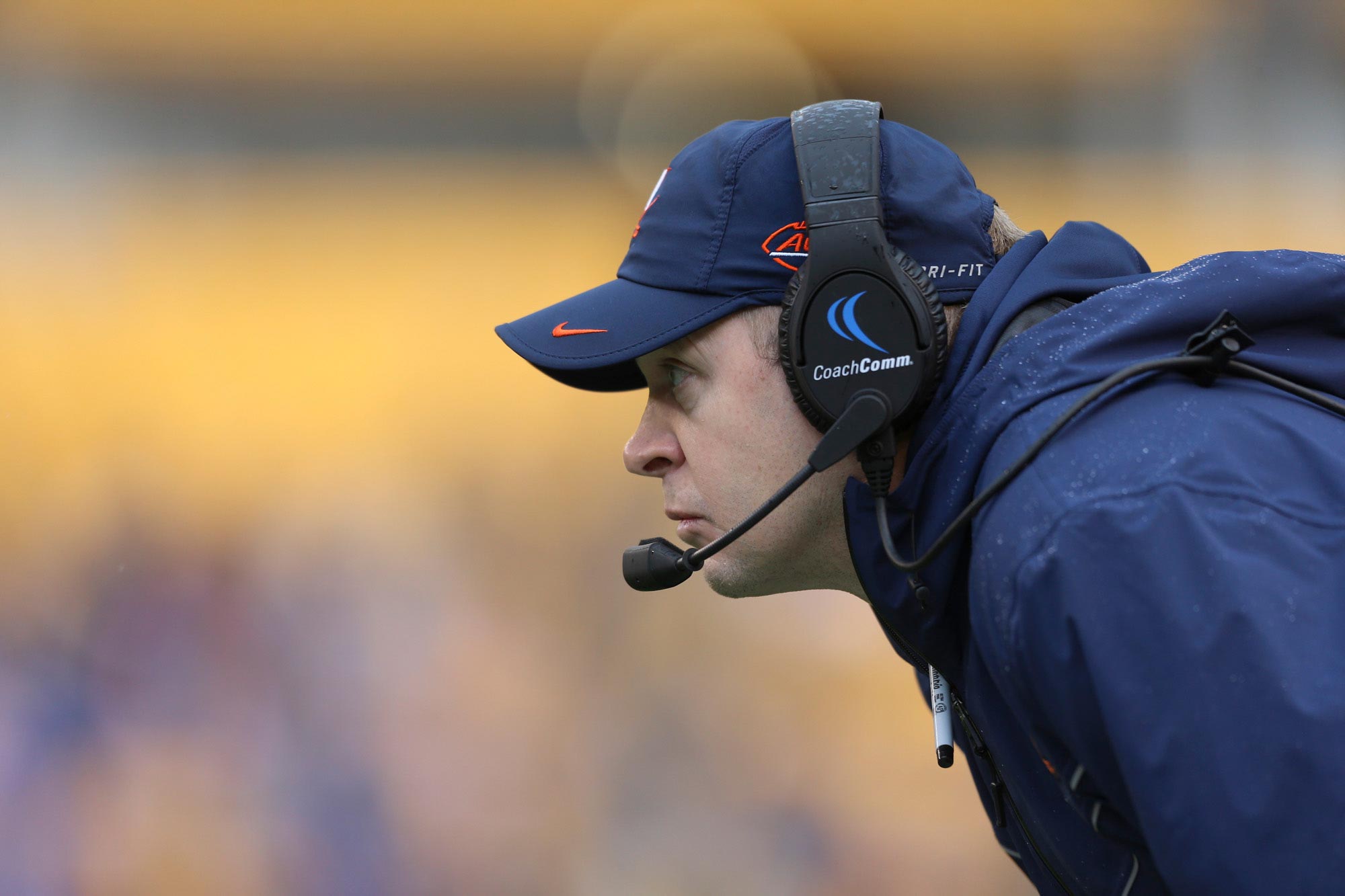 When the University of Virginia football team will start practicing again remains unclear, but it won’t be this semester. Online courses have taken the place of classroom instruction at UVA, whose students are scattered around the country and around the world.

The Cavaliers might be allowed to reconvene this summer, but there’s no guarantee that will happen. None of this is ideal for his program, head coach Bronco Mendenhall acknowledged Thursday, but he understands that football isn’t – and shouldn’t be – a major priority as the United States deals with the spread of COVID-19.

“Spring practice has huge benefits for player development, especially when you have a new quarterback,” Mendenhall told media members on a videoconference. “However, to say that you can’t get a team ready without that just isn’t true. It’s more challenging, it’s more difficult, it will take more work and more innovation, but when you measure that against the circumstances we’re in, it really doesn’t seem that important, quite frankly, in relation to the broader perspective. So we’ll do what we have to do, what we’re allowed to do and when we can do it, to make the most of our football program and team.”

“This had the potential to be basically something that could affect the human family. It wasn’t difficult for me to frame it in that regard, and so football became an afterthought at that point. Student-athlete and just basically human being welfare became paramount. And so we’ve been framing things against that since that initial meeting with Carla and the head coaches.”

Mendenhall is heading into his fifth season at UVA, which has returned to prominence in the ACC during his tenure. The Wahoos are coming off a season in which they defeated Virginia Tech, won their first Coastal Division title, appeared in their first ACC championship game and played in the Orange Bowl for the first time.

After two seasons with Bryce Perkins at quarterback, Virginia was preparing to move on this year with his understudy, Brennan Armstrong, leading the offense. But that’s on hold indefinitely.

Mendenhall acknowledged that the cancellation of spring practice “prohibits and eliminates a growth opportunity [for Armstrong] that we won’t be able to recreate. … No question that will hurt us. No question it will set us back. No question it will make it harder to execute the way we need to and it puts more pressure and a tighter time frame on all of us. Brennan’s individual preparation, his individual commitment, his individual resiliency as well as self-reliance and problem-solving – without that being at a very high level, it’ll be really challenging. But those are the type of young people I want on my team and those are the kind of kids I want at UVA: [players] that love challenges and want to take on these kinds of unique challenges and hard things.”

For now, Mendenhall said, the Cavaliers’ staff is proceeding as if the team won’t practice again until training camp begins in August. But even that timetable might be overly optimistic, Mendenhall said, meaning “there certainly could be a chance that it’s not even a full schedule played this year, if football is played, period. I’m willing to expand and look at that vision as far as possible, saying, ‘OK, what if there’s just no football this season or what if there’s a modified season or what if all we can do is start fall camp?’ So we’re making preparations the best we can for any and all of those scenarios, including those if players can arrive in summer at any point in time.”

If a full season isn’t possible for college football, Mendenhall said, canceling non-conference games might be an option.

“I think that’s the first alternative,” he said. “You’re talking about knowing that that would still be challenging and you’d be starting with a conference opponent and only playing conference opponents. But in relation to the options we have, that certainly might be doable. I think once you get under eight games, that probably becomes a non-legitimate season, knowing that if you played eight and they were all conference games and then you had your conference championship game and then you had bowl games, that could lead to a 10-game season. That’s about where my threshold would be.”

Mendenhall said he and his assistants have been working remotely and using technology to facilitate their group work.

“We meet and have staff meetings as if we were working in normal conditions,” Mendenhall said. “We’ve done the same thing with our players. They have a schedule that was sent out to them as if they were still at UVA, meaning a wakeup time, their nutrition time, their workout times, their meeting times with academic coordinators, with mentors, with learning specialists, when their class times are. We’re adding structure to make this as normal as possible. … Our staff meetings happen as normal, our player relations happen as normal, their classes happen as normal, if you consider now [communicating] remotely as normal.”

Mendenhall said there are no “restrictions that prohibit how often the coaches can meet with the players virtually or online, but there is prohibition in what we can actually talk about. We are not currently in spring practice, so we can’t be presenting and doing online meetings for football, because that would be outside of the parameters of what normal compliance work would look like right now, since this hasn’t been deemed spring practice.

“We can communicate with them on health, on well-being, on academics, on nutrition, on social choices, on their condition, on their housing, on things that are just relationship-driven and well-being-driven. Things can be forwarded to them in terms of studying, but there can’t be any back and forth instruction in regard to football.”

Mendenhall also provided an update on his newest staff member. Defensive line coach Clint Sintim is settling in after taking over for Vic So’oto, who’s now at Southern California. Like wide receivers coach Marques Hagans, Sintim is a former star for the Cavaliers.

“I felt that it’s very important to be adding UVA tradition, UVA passion and UVA history to our program, as myself and my staff came from a different part of the country,” said Mendenhall, who previously coached at Brigham Young University, as did most of his assistants.

“I love the idea of building a program specific to and for the University of Virginia. We’ve had interaction with Clint over about the past three years, through professional exchange as well as alumni functions, and my defensive staff really pushed hard and believed in him and their relationship, and so far I’ve been very impressed. So we’re glad to welcome Clint back.”

Mendenhall and his wife, Holly, have three children, all sons. The family lives on a 30-acre property in Ivy, and “we have plenty of social distancing here,” Mendenhall said, smiling. “We can be as far apart from each other as we want to be.”

The property includes a pool house, which has become Mendenhall’s office away from the McCue Center.

“My workday starts at 8 [a.m.],” he said. “I have all the exact same things that I would have at the office [at the McCue Center], so all of my computers and film, and I have a big screen in there, just as the workstation would at work.

“At 12 to 2, I eat lunch and work out, and then we have a remote staff meeting from 2 to 3. Recruiting is 3 to 5 each day, and then after that I make my commute back home for about a minute, I change clothes and then I go out with my boys.

“My boys are into rodeo. I have a roping arena on my property. I transition into my cowboy clothes. I go out and ride for a couple hours, and then I have recruiting calls, players that are calling me in the evening usually from 7 to 9. Then I repeat that the next day.”

EDITOR'S NOTE: During this time of non-competition, UVA Athletics will be posting frequently on VirginiaSports.com to keep you up to date with the happenings, experiences and thoughts of our student-athletes, coaches, staff and alumni. We encourage Wahoo fans to share these links on your social media accounts for others to enjoy. #GoHoos

What it Means to Be a Cavalier Baseball Player END_OF_DOCUMENT_TOKEN_TO_BE_REPLACED