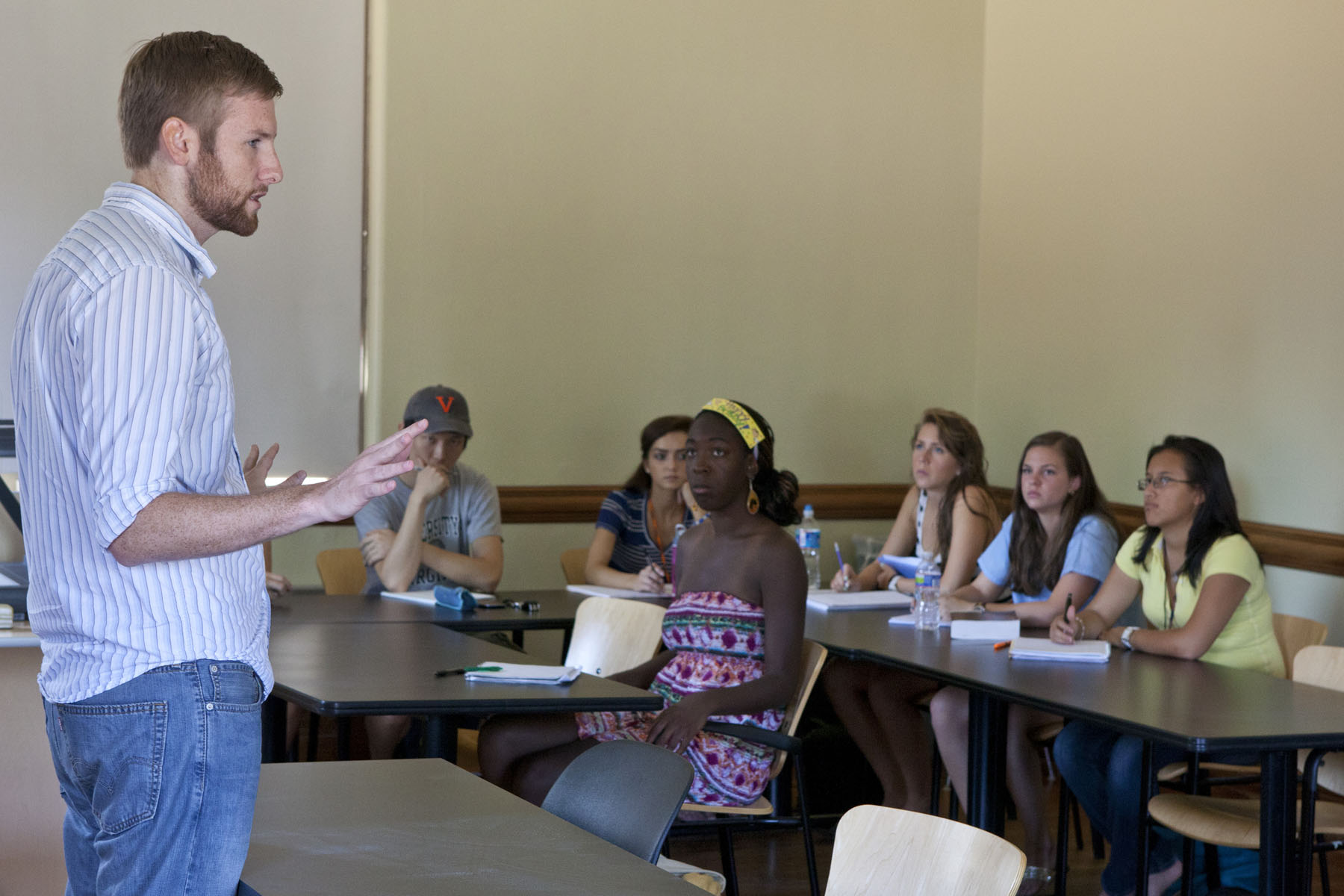 Philosophy comes from the Greek word, philosophia, or "love of wisdom." Thomas Jefferson studied the discipline, and was exposed to such thinkers as John Locke, Francis Bacon and Isaac Newton. Years later, as he was conceiving the University of Virginia, he wanted philosophy to be part of the curriculum.

His vision has led countless philosophers, both novice and credentialed, to fill the halls of U.Va. for nearly two centuries. This summer, 18 such individuals have been gathering in Cocke Hall for several hours each weekday to contemplate the "Mind and Body," a course offered through U.Va.'s College of Arts & Sciences.

"There is an intuitive distinction between the body and the mind," said instructor Matt Duncan, a doctoral philosophy student, who designed and is teaching the course to 17 students. "The body is made up of physical stuff. It takes up space.

This distinction, along with "the hard problem," a phrase coined by contemporary philosopher David Chalmers to explain how physical processes give rise to conscious experience, is the central issue for Duncan's course, in which students read a variety of arguments by such scholars as Chalmers, John Heil, Alvin Goldman and U.Va.'s own Trenton Merricks, a professor of philosophy.

Some of the questions students grapple with through readings and course discussions are: What is "philosophy of the mind"? What is consciousness? Is the mind just the brain (physicalism), or is it more than the brain (dualism)? Does adopting a naturalistic conception of the world commit you to physicalism? On the other hand, does theism or non-naturalism commit you to dualism?

"Sometimes philosophy gets accused of being overly esoteric and impractical," Duncan said. "But I've always thought that philosophical questions and problems like the mind-body problem are among the most important and relevant issues that one can think about."

Duncan earned his B.S. in philosophy and psychology from Westmont College in Santa Barbara, Calif., and an M.A. in philosophy at Georgia State University. He worked as the editor of a small-town newspaper for a year between undergrad and grad school.

He said his course has had broad appeal. Nursing and psychology majors are interested in the medical side of this topic, especially issues related to mental disorder. Other students are interested in the "spiritual or religious import of the debate, and I also have plenty of students who, like me, just think that philosophy of mind is really interesting and important," he said.

The students "ask good questions, debate with each other. They are a sharp bunch," Duncan said.

Assignments include writing at least three précis (brief synopses of any of the readings followed by a critical analysis), taking several quizzes, writing a final paper and engaging in one-on-one debates, happening this week. In the debates, students will be randomly paired off; one student chooses the topic, and the other chooses the side to argue. "That should be fun," Duncan said.

"Everyone is really looking forward to" the debates, said Ashley Pacitto, an entering first-year hoping to attend law school. She selected summer courses "that would promote critical thinking and analysis" and enhance her ability to argue well.

Duncan has made this class "interesting, enjoyable and even a little bit infuriating," Pacitto said.

"I never thought that I would doubt myself so much in one month, but surprisingly I have actually come to like the constant challenging of my ideas," she said.

Ricardo Goellnicht, another entering first-year who intends to major in business, said he chose the course because "the connection between the mind and body has always fascinated me. I, like most people, frequently find myself contemplating questions such as 'Where does my consciousness come from?" and 'What entity constitutes who I am: my brain or my mind? Or are they the same thing?' Questions like these convinced me that the class would be worth taking."

Kelly Lawrence, a psychology teacher at Monticello High School, needed to take a course for re-certification. "It has been really fun," she said. "I graduated from U.Va. in 1988, and this is the first course I have taken at the University since we moved back here in 2003. … The class has been rigorous, and it definitely makes you think critically."

Denson Staples, who graduated in May with a degree in religious studies and is now enrolled in the School of Continuing and Professional Studies' post-baccalaureate/pre-medical program, said he wanted to take a class that would give him "a more holistic understanding of the connections between physical health and mental well-being."

"Reviewing material for quizzes has helped me understand how individual authors fit together to create the entire field of philosophy of the mind and all that we know, to date, about mind-body interactions," he said.

His biggest take-away is "that there are mysteries in life that we must be comfortable accepting as ineffable and beyond our understanding. Even those things that are extremely familiar to us, like our minds and consciousness, transcend our ability to understand – in this way, although we know ourselves better than anything in the world, we are strangers to ourselves.

"For me, this has reaffirmed just how truly miraculous biological life and human life are; we are each a puzzle beyond comprehension."

Should Alcohol Have Warning Labels About Cancer Risk? Most Americans Say ‘Yes’ END_OF_DOCUMENT_TOKEN_TO_BE_REPLACED