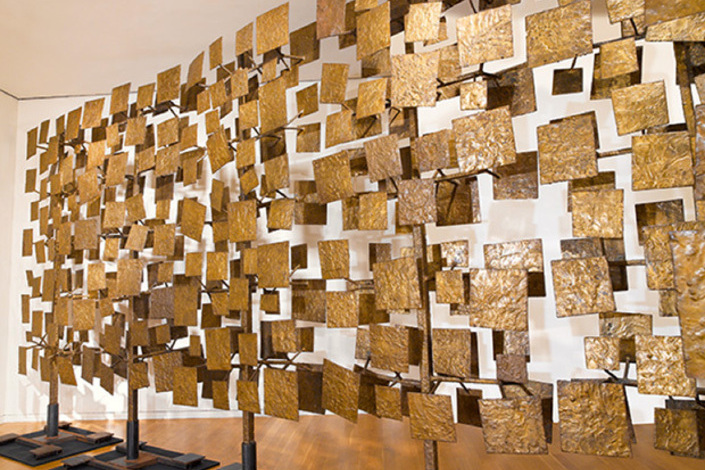 In 2009, Kim Tanzer, dean of the University of Virginia School of Architecture, found herself examining 10 dusty crates in a school storage unit.

She knew they contained sculptures by Harry Bertoia, a renowned Italian-born American artist, sculptor and modern furniture designer. The crates held 10 tree-like screens of brass-coated steel, each 10 feet tall and 5 feet wide, which had been donated to the school by one of its alums.

What she couldn’t know at the time was how that moment would lead to a series of creative decisions and acts of generosity that would finance the creation of the Architecture School’s first doctoral program.

“It’s kind of a miracle that something so unexpected gave us such a good result,” she said.

While unusual compared to Bertoia’s more common “sonambient” sculptures, which create sound by interacting with wind and weather, the sculpture screens were consistent with his most valued work.

Architect and interior designer Florence Knoll had commissioned this particular piece in the 1950s for the First National Bank in Miami. Many years later, when the bank was demolished, U.Va. architecture alumnus Victor Elmaleh – an entrepreneur, art lover and real estate developer ­– purchased the Bertoia sculpture and displayed it in his Los Angeles interior design store.

When Elmaleh sold his business in 2000, he donated the Bertoia piece to the School of Architecture. Then-Dean Karen Van Lengen accepted the gift, agreeing to display it in the near future, and placed it in storage while the school completed an expansion of its main building, Campbell Hall.

Years later, when the expansion was complete and after Van Lengen had stepped down as dean, Tanzer set out to keep her predecessor’s promise. That’s when she found herself in the storage unit.

Her challenge was finding a place to exhibit the sculpture. The piece couldn’t be displayed outside because the brass-coated steel would rust, and it was so large there were only two possible indoor spaces where it would fit.

“I wanted to try to protect the sculpture in perpetuity,” she said. “We didn’t want it damaged while it was on display.”

Tanzer decided to display six of the 10 screens – there wasn’t room for all 10 – for 18 months in the school’s design studio.

Meanwhile, the school had other needs. While her predecessor’s priority had been completing the Campbell Hall expansion, Tanzer was seeking to launch the school’s first doctoral program. To do that, she needed to provide funding for graduate students.

Tanzer contacted Elmaleh and explained the situation. Would he consider the sale of the sculpture to provide funds for other needs at the school?

Elmaleh agreed to allow the school to sell the screens individually. But after researching the sculpture, Tanzer determined it wasn’t 10 different sculptures, but one sculpture comprising 10 parts. “We decided it really shouldn’t be broken up,” she said.

Selling the sculpture, however, proved to be more challenging.

Elmaleh had technically given the school shares in a corporation he created that owned the sculpture. So Tanzer had to work with the University general counsel’s office to close the corporation and establish U.Va.’s ownership of the sculpture.

Adding to the challenge was the fact that Bertoia did not sign his work, so it needed to be authenticated before it could be appraised. Val Bertoia authenticated the sculpture as the work of his father, with the help of a photograph of father and son alongside the piece.

Establishing a market price was difficult because so few of Bertoia’s sculptures have ever been sold. An initial appraisal of the sculpture suggested it might be worth considerably more than an initial offer of $200,000 from an unspecified party. Val Bertoia could only offer a wide range of possible values.

Tanzer contacted Nicholas Acquavella, a 2000 U.Va. alumnus with a major in art history and friend of the Architecture School whose family owns Acquavella Galleries in New York. Acquavella broke the ice with the art world, assessing the interest of two major art auction houses – Christie’s and Sotheby’s – in selling the large, unusual work.

In accordance with state procurement policies, the school put out a request for proposals for selling the work. “Sotheby’s came up with the best proposal,” she said.

Sotheby’s proposed building a selling exhibition around the University’s piece, along with other Bertoia works. About 30 Bertoia pieces went into the exhibit, held at the Sotheby’s showroom in New York City in February and March 2014. About half of them sold; the U.Va. screens did not.

Months later, Tanzer received a phone call from Anna McKnight, a specialist in contemporary art at Sotheby’s. McKnight said there was still interest in the piece. Within days, Tanzer was negotiating by phone with Sotheby’s, which was acting on behalf of an interested buyer.

The final sales price of $1,050,000 was at the low end of the range that Val Bertoia had suggested. The deal closed June 30, 2014 – Tanzer’s last day as dean, and nearly five years after the project had started.

With a growing demand in the field for architectural experts who can teach, consult and conduct research, the School of Architecture now had the funds to advance its doctoral program.

According to Nana Last, associate professor and director of the new Ph.D. Program in the Constructed Environment, as architects increasingly interact with partners such as developers, builders and government officials, architectural firms have increased the role of research in their work, making a doctoral program that much more essential.

Consequently, the school is building a 21st-century model for a Ph.D. program in the constructed environment, one that is cross-disciplinary in both content and methods.

In August 2014 thanks to the sale of the Bertoia sculpture, the school established an endowment for the program: the Victor and Sono Elmaleh Fellowship Fund, named for the donor and his wife.

That same month, the school welcomed its inaugural class of five Ph.D. students for the 2014-15 academic year. Four received support from the fund. The school expects to accept four to five new students each year.

Doctoral student Julia Triman said the Elmaleh Fellowship gave her the gift of time to enrich her education, allowing her to expand and deepen her work on the Biophilic Cities Project, which studies cities that foster connections with nature.

Beth Meyer, the current dean of the School of Architecture, applauded her predecessors’ ingenuity and vision. “Karen and Kim saw possibilities with the Bertoia screens where others saw material objects. I love the fact that, through them, the screens were transformed into an enduring intellectual legacy.”

The Elmalehs’ gift thus has concretely transformed the School of Architecture through funding support for its new doctoral program.

“We wouldn’t exist without it,” Last said.

What’s Next for UVA’s Class of 2022? END_OF_DOCUMENT_TOKEN_TO_BE_REPLACED