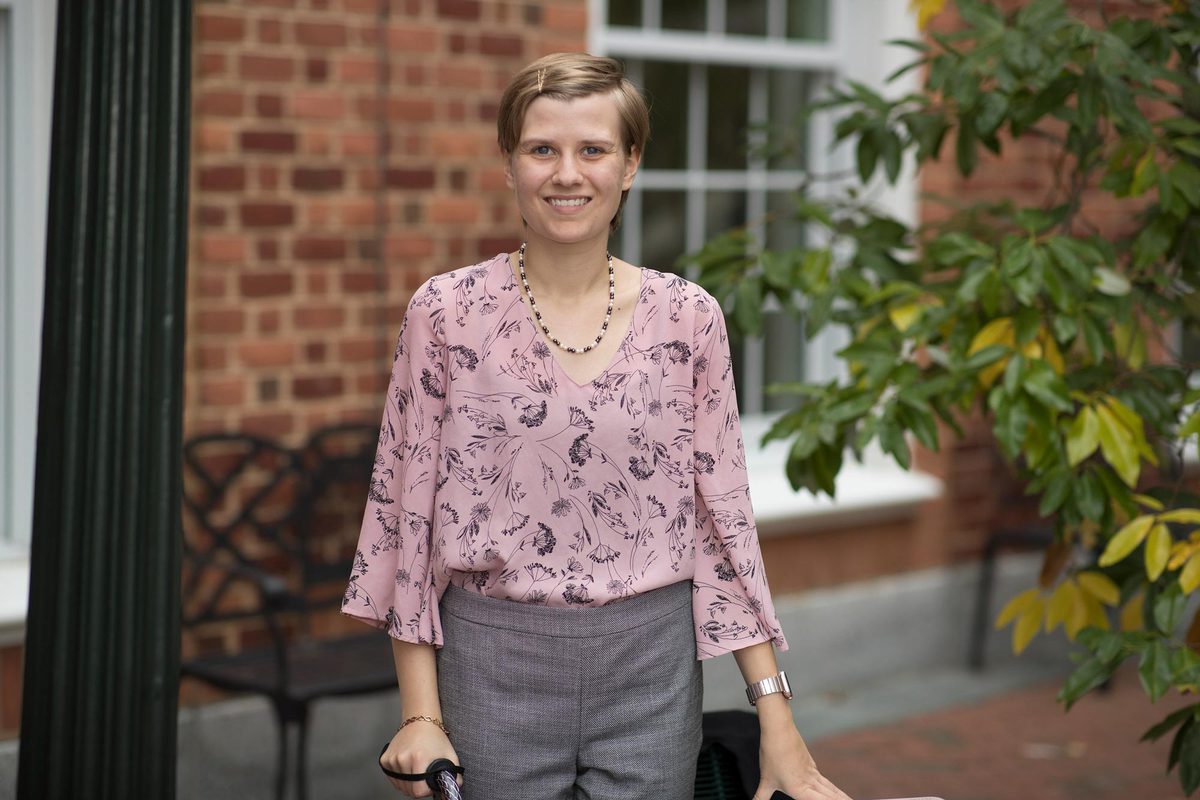 Ashley Heuser is the student administrator for the Disability Studies Initiative and the president of Chronically Ill and Disabled Cavaliers. (Photo by Dan Addison, University Communications)

Ashley Heuser has been living with migraines since she was a young girl, but they got much worse shortly after she arrived at the University of Virginia.

As a first-year student, she suffered stroke-like symptoms and was rushed to the emergency room.

After recovering, Heuser eventually was diagnosed with sporadic hemiplegic migraines, a rare disease involving weakness of the face, arm or leg on one side of the body that can be accompanied by numbness or a pins-and-needles feeling.

As you would expect, Heuser’s world was – in a flash – turned upside-down.

A former valedictorian at Millbrook High School in Winchester, she had just always assumed that she would be able to continue her excellence in the classroom.

“But then all of a sudden, I can’t go to classes because I have a migraine. I can’t type because my left side is numb,” Heuser said.

For Heuser, these were the lowest points.

Fortunately, it wasn’t long before she connected with a student-run organization on Grounds that is now called Chronically Ill and Disabled Cavaliers.

“That’s when I really started to find my community,” Heuser said. “It really helped with claiming my identity as a disabled woman.

“It was no longer myself against my body. It was just, ‘My body is what it is’ – and there’s a lot of power in recognizing that.”

Now a fourth-year student, Heuser is president of the organization. In addition, she serves on UVA’s Disability Advocacy and Action Committee and is the student administrator for the Disability Studies Initiative.

That initiative, funded by a three-year grant (that ends in May) from the Alumni Association’s Jefferson Trust, is a working group of faculty members from different departments who explore the social and cultural aspects of disability through various projects and events.

The initiative’s co-director, Christopher Krentz, an associate professor in the English department, met Heuser last spring and subsequently hired her for a paid, eight-hour-per-week position.

“I said, ‘This young woman has the fire,’” Krentz recalled.

Heuser contributes to a blog on the Disability Studies Initiative’s website that features students, faculty and alumni. She recruits writers, does all the editing, and designs and distributes marketing material for events.

Heuser has organized an event titled “Athletics and Disability” – a roundtable discussion on Nov. 13 from 7 to 8:30 in Monroe Hall, room 110 featuring student-athletes and faculty who have accessibility concerns.

She has also put together an event slated for Dec. 2 through UVA’s Corcoran Department of History that focuses on disability history.

The Disability Studies Initiative’s premier event will be a symposium taking place in the Rotunda in late February. Krentz said Heuser’s contributions have been invaluable.

“She has done so much already in just a few short months,” he said. “In past years, I’ve employed graduate students. They’ve been wonderful and worked hard, but they had no previous knowledge of disability studies.

Heuser said being able to brainstorm with faculty members like Krentz and media studies professor Elizabeth Ellcessor has been one of the most fulfilling parts of the job.

Best of all, the dialogue has extended into classes she has taken from them.

“I can really talk about things I’m extremely passionate about that normally I have to contextualize if I write about it in another class,” she said. “The support of faculty for pursuing my interests has been great. They have really tried to intertwine their knowledge with mine. It’s been really fruitful.”

Currently, Heuser, a member of the distinguished majors program in the history department, is working on her thesis, “Changes in Student Perceptions of Disability at UVA, 1819-2019.”

Heuser said her goal is to bring disability to the forefront of conversations that are taking place everywhere.

“That not only helps to make UVA more diverse, accepting and inclusive,” she said, “but it also helps disabled students to feel like they are welcomed and accepted and can look at the world the way that they see it.”

After graduating in May, Heuser plans to pursue a master’s degree in public administration.

Heuser’s goal is to become an Americans With Disabilities Act compliance specialist for state or local government, with the long-term goal of becoming the White House’s ADA liaison.

Heuser, who walks with a cane, said an internship this summer in Washington, D.C., at the Office of Disability Rights was an eye-opener.

“We have the American with Disabilities Act, and there’s just this perception that just because it’s 29 years old, everyone is in compliance,” she said. “But because the ADA was an unfunded mandate, very few places are in compliance. It’s up to the ADA compliance specialists to act as kind of a negotiator or mediator between the government and the disabled population.

“From the experience, I realized that if disabled people get into ADA compliance, it really helps the government itself negotiate that relationship. Disabled people need to be at the table for any piece of legislation policy, with plans to administer it.”