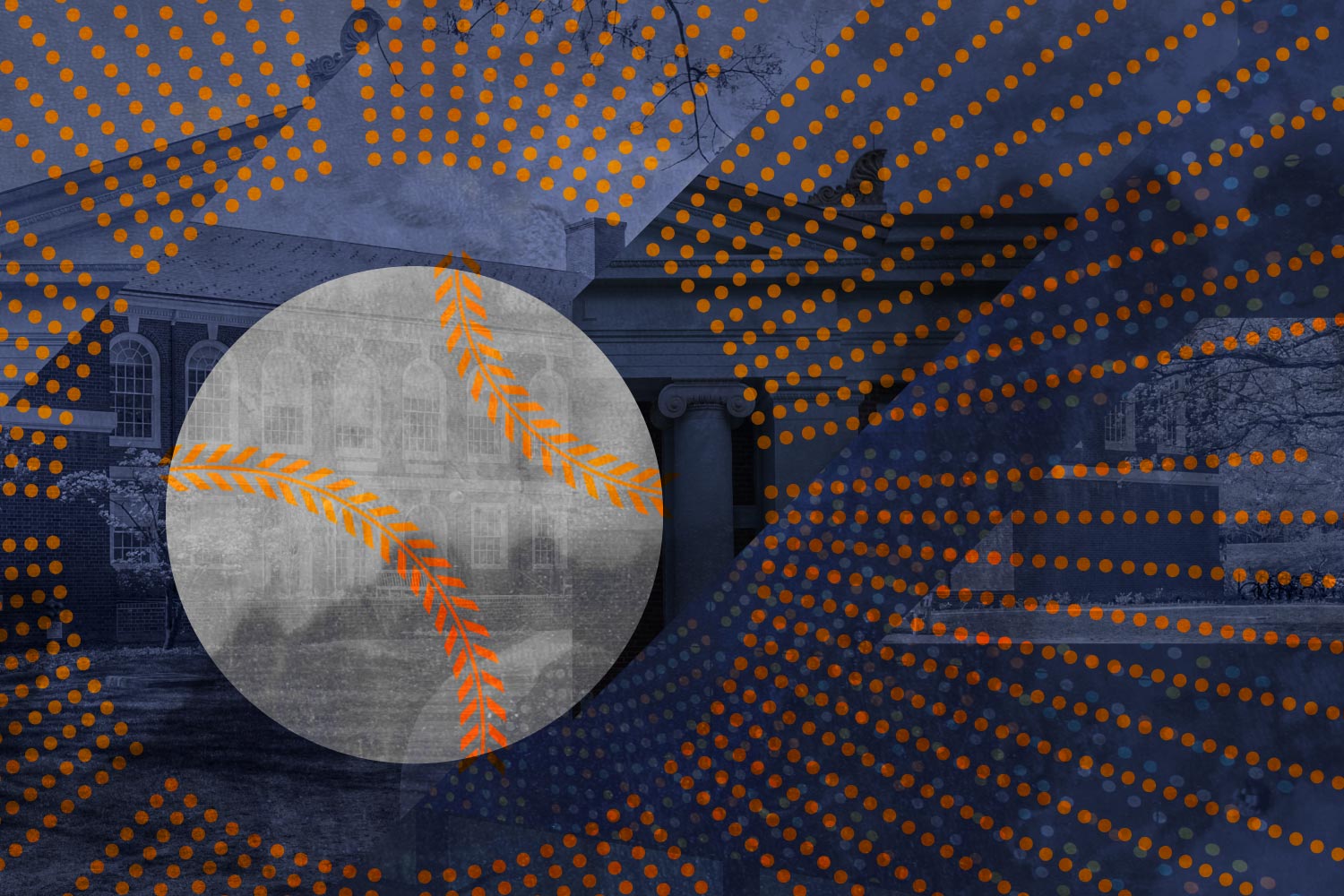 It’s Game 7 of a future World Series between the Los Angeles Dodgers and New York Yankees.

The Dodgers lead by a run with two outs in the ninth inning. With a man on, Yankees slugger Aaron Judge is at the plate.

Dodgers closer Kenley Jansen peers in for signs from his catcher. Will he throw Judge a slider, or try and sneak a fastball by him?

The answer to that hypothetical question could be based, in part, on the work of young professionals who have more experience with spreadsheets and data than bats and gloves. They are part of the ever-growing sports analytics field that was brought to prominence by the best-selling book and hit movie “Moneyball” in 2003.

In the last several years, a number of University of Virginia graduates have joined their ranks, crunching numbers for Major League Baseball teams.

“‘Moneyball’ got everybody thinking about sports analytics,” said Arlyn Burgess, the associate director for operations and strategic initiatives at UVA’s Data Science Institute. “It is certainly a niche that we want to make sure that we’re covering because we see such an excitement from students.” 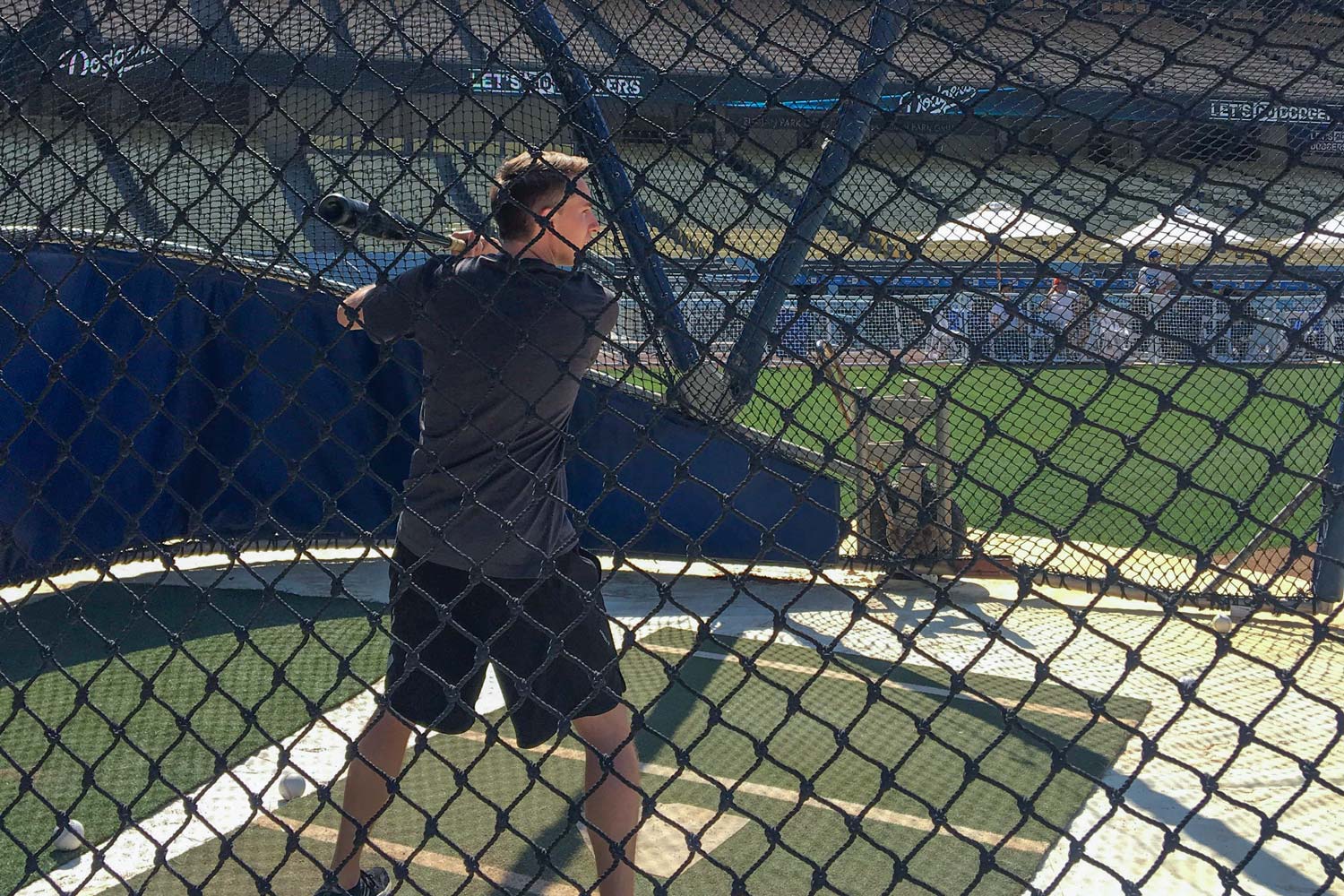 Michael Voltmer, who earned his master’s degree at the Data Sciences Institute in 2016, was one such student.

Voltmer is now in his third season in the Dodgers’ baseball operations department.

As a kid, Voltmer had always been interested in baseball and statistics. He read “Moneyball” in the seventh grade. “I was like, ‘OK, this lines up all my interests pretty well,’” he said.

Still, Voltmer wasn’t sure how feasible a career in sports analytics was.

As an undergraduate student at the University of Louisville, he studied economics and served as a student manager on the baseball team. With the idea to turn his dream into a career, Voltmer came to the Data Science Institute, which had just launched the year before.

Voltmer quickly realized that it wasn’t going to be easy. Sports analytics jobs were in high demand. Toward the end of his time at UVA, Voltmer had resigned himself to working in another sector of data science.

But then, through a professional development stipend from the Data Science Institute, he attended the MIT Sloan Sports Analytics Conference, where he was able to network with representatives from major league teams.

Soon after, he heard from the Dodgers. Several interviews later, he landed his dream job.

When pitchers and catchers reported to the Dodgers’ spring training camp in Arizona, so did Voltmer. The 26-year-old Princeton, New Jersey native met with the coaching staff to explain changes from the previous season’s analytic models.

“If we’re changing the deliverable that ends up going to them, it’s a good opportunity to get in front of them and get their feedback – to collaborate more that way,” Voltmer said.

The reports that Voltmer helps create are part of the Dodgers’ advance scouting operation. They help determine how to attack opposing hitters.

“We want to best understand the weaknesses of the hitter, so that our pitcher can exploit them and, ultimately, increase the chances of getting the hitter out,” Voltmer said. “We have different ways of displaying that, which is what we tweak during spring training.”

Voltmer said his classes at UVA prepared him for his job, despite the fact most didn’t involve sports, per se.

“Each class was different in content, but they were similar in that they had creative assignments that weren’t just straight out of a textbook,” he said. “They made you think and provide a unique solution, which provided good training for the real world.”

One example was a class taught by systems and information engineering professor and Data Science Institute capstone adviser Matthew Gerber in which students had to predict occurrences of crime in Chicago.

“Dr. Gerber had done a lot of research on crime,” Voltmer said, “so the assignments were a good balance of utilizing his knowledge and applying the various techniques we were learning about in class to a real dataset.” 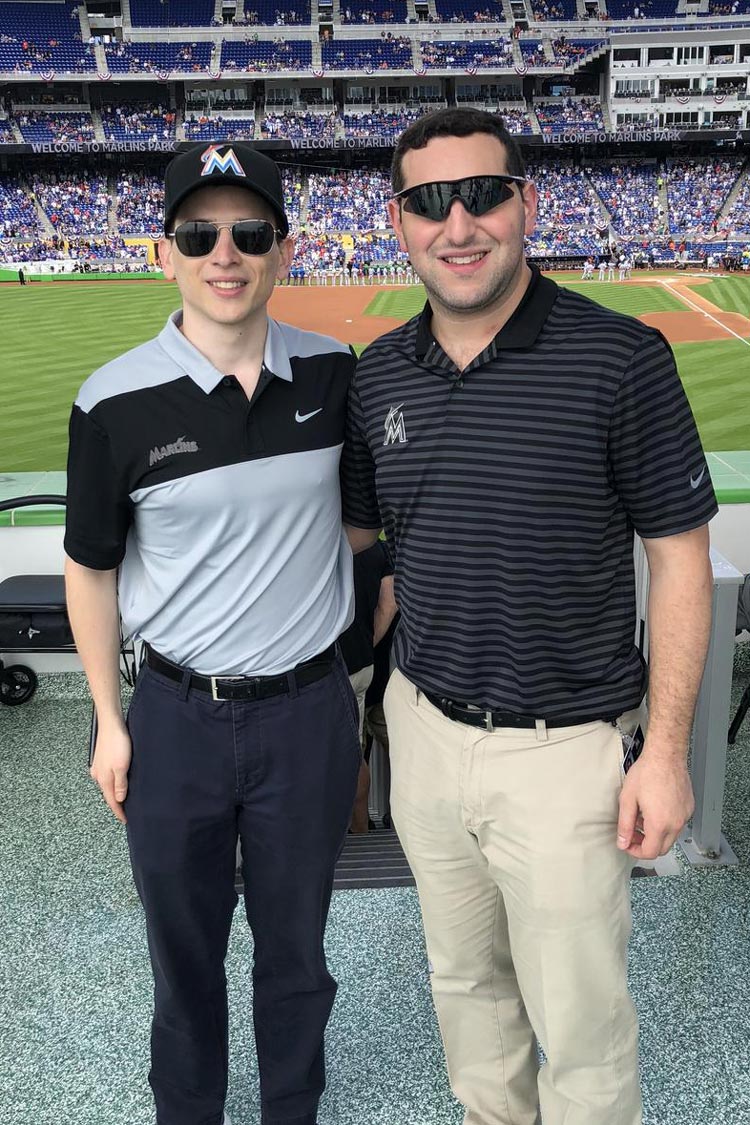 As a UVA engineering student, Myles Lewis – now in his first year as a senior analyst for the Miami Marlins – had similar experiences.

Lewis said his coursework taught him the value of data-driven decision-making. “I learned how to define ambiguous problems and develop solutions with uncertain information,” he said. “My systems professors prepared me incredibly well to tackle the challenges I face each day.”

Which is the whole objective, according to UVA systems and engineering professor Bill Scherer. “What we don’t want to do is teach all of this stuff in a vacuum,” he said.

Like Voltmer, Lewis – who graduated in 2015 with a B.S. in systems engineering – was also a huge baseball fan as a kid.

However, he said he was interested in sports analytics even before the movie “Moneyball” came out. “I would say that ‘The Book’ by Tom Tango had a much larger impact on my decision to work in baseball,” he said. “It goes into more detail on some mathematical concepts, but helped me better understand how I could mesh my interest in baseball with the skills I learned through the systems curriculum at UVA.”

Lewis said working in sports analytics has been as fulfilling as he had hoped.

“The work I do each day plays a small part in helping the Miami Marlins win more baseball games,” he said.

“It’s very cool and exciting to be working with a friend and UVA alum,” Lewis said. 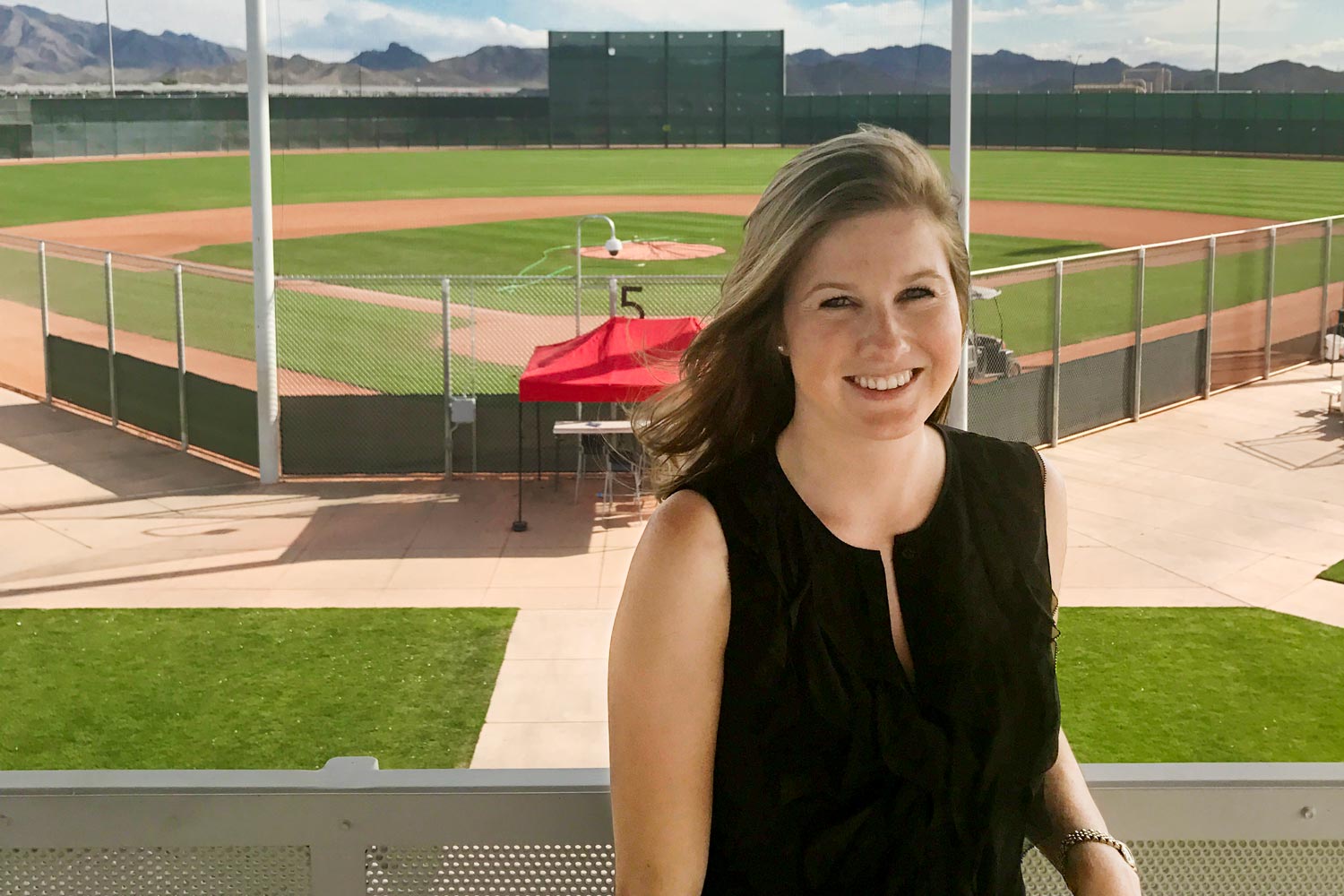 Haley Alvarez, a scouting coordinator for the Oakland Athletics, got her start in baseball analytics while a student at UVA. (Contributed photo)

Haley Alvarez, a 2015 UVA McIntire School of Commerce graduate who has worked for the Boston Red Sox and Cincinnati Reds and is now scouting coordinator for the Oakland Athletics, honed her analytics skills as a student manager for the UVA baseball team.

“Coach [Brian] O’Connor was so generous and really let me dive into so many different aspects of the game,” Alvarez, who gained experience with the same analytics software used by major league teams, said in a 2017 interview with UVA Today.

“Learning that early on really gave me a leg up, and working closely with the coaches and the players was such a great experience to learn more about the game on and off the field,” she said. “Coach O’Connor is still one of my mentors, and has been a great role model.”

Now Alvarez gets to work under Oakland’s executive vice president of baseball operations, Billy Beane, the central figure in “Moneyball.”

The incorporation of analytics into baseball’s mainstream only continues to grow.

According to a recent report in the Washington Post, the Atlanta Braves have increased their analytics department from two employees to more than a dozen within the last year.

Interest has also grown among the University’s sports teams. Since getting the master’s program at the Data Science Institute up and running in 2014, Burgess said she has been in touch with UVA coaches from various sports who are interested in collaborating on analytics projects, including some that include athletes donning wearable devices to measure their movements and effort. “We’re ripe for any number of opportunities as they come along,” she said.

Voltmer said he will be forever grateful for UVA’s role in allowing him to live his childhood dream. Last October, he even got to travel with the Dodgers to World Series games in Houston.

“It was a whirlwind,” Voltmer said. “I worked a ton of hours.

“It was fun seeing the whole city get behind the team and being a part of something bigger than yourself.”

What Is Biotechnology? Where Is It Headed at UVA? END_OF_DOCUMENT_TOKEN_TO_BE_REPLACED