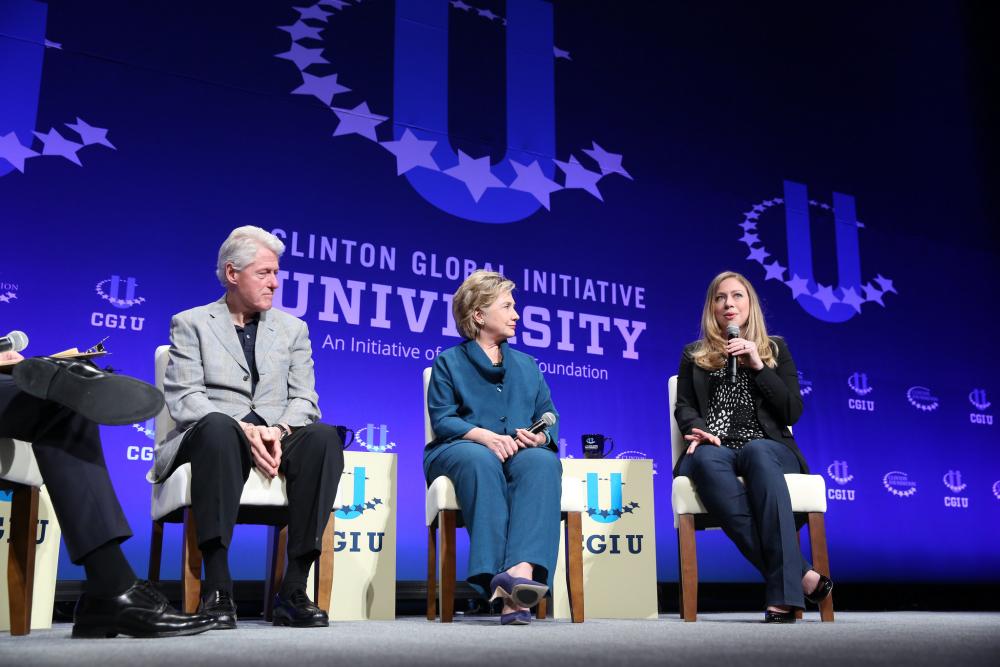 Twenty-six University of Virginia students were invited to participate in the 2015 Clinton Global Initiative University conference, held over the weekend at the University of Miami in Coral Gables, Florida.

The eighth annual conference, hosted by former President Bill Clinton and his daughter, Chelsea Clinton, brought together more than 1,000 students to discuss “commitments to action” they made to address global challenges across five focus areas: education, environment and climate change, peace and human rights, poverty alleviation, and public health.

To attend, students had to pass a competitive selection process by submitting compelling solutions to today’s most pressing issues and explaining how their “commitments to action” are new, specific and measureable.

Of the U.Va. students selected to attend this year’s conference, 13 represented U.Va.’s College of Arts & Sciences, nine were from the School of Engineering and Applied Science and two were from both the School of Architecture and the Batten School.

Projects may work to improve one’s local community or have a more global reach. Samantha Clark, a fourth-year biochemistry major, developed her idea for creating a sustained-release antibiotic implant to treat tuberculosis during a course she took last year called “From the Lab Bench to Your Medicine Cabinet,” taught by Linda Columbus, an associate professor of chemistry, molecular physiology and biological physics.

Instead of using oral medications that take up to six months to cure tuberculosis, the medicine would take the form of an implant that would be inserted under the skin and release antibiotics, similar to contraceptive hormonal injections, Clark said.

“Curing TB is arduous and people rarely finish it, sometimes because they feel better and don’t think they need to, partly because [the process is] so long, and a lot of times because you’re in an under-resourced country where you can’t necessarily get to a pharmacy or where that pharmacy doesn’t necessarily have your drugs,” she said. “As a result, about 60 percent of people who start TB treatment don't finish.”

The need for the idea that she formed at U.Va. with teammates Catherine Weathered, a first-year engineering student, and Nick Baldi, a third-year chemical engineering major, was underscored when she studied last summer in South Africa, which has a large tuberculosis problem due in part to the HIV epidemic.

“I saw how people being unable to get to pharmacies to get their medication, or getting to the pharmacy and them being out of medication, would lead to their stopping treatment. This implant … would mean that every person who started treatment would be fully cured, because it contains all the antibiotics for a full TB treatment regimen. It’s simpler, cheaper and easier than the current standard.”

Jennifer Moss, a third-year global development studies major, and her teammates Xavier Roberts, Rachel Prestipino and Sarah Higgins, said their proposal, “A Menu for Success,” will seek to improve the school lunch menus of children in the Charlottesville area.

“We heard about [the CGIU] through our academic adviser and we thought it would be a cool opportunity,” Moss said. “We’re looking to learn about funding for our project, and sessions will be about how to critique your project well, and how to find that funding. And there are also a lot of really great speakers, so I’m definitely looking forward to it.”

The event allowed students to network with peers, build skills and identify potential partnerships. University representatives, topic experts and celebrities joined students to help them gain the skills and knowledge they need to take action on their commitments. On Sunday, attendees took part in a “Day of Action” in the local community.

Here Is What You Need to Know About the New Coronavirus Variant, Omicron END_OF_DOCUMENT_TOKEN_TO_BE_REPLACED

Fall Is in the Air on Grounds END_OF_DOCUMENT_TOKEN_TO_BE_REPLACED

Meet the Cats and Dogs Your CVC Donation Supports END_OF_DOCUMENT_TOKEN_TO_BE_REPLACED