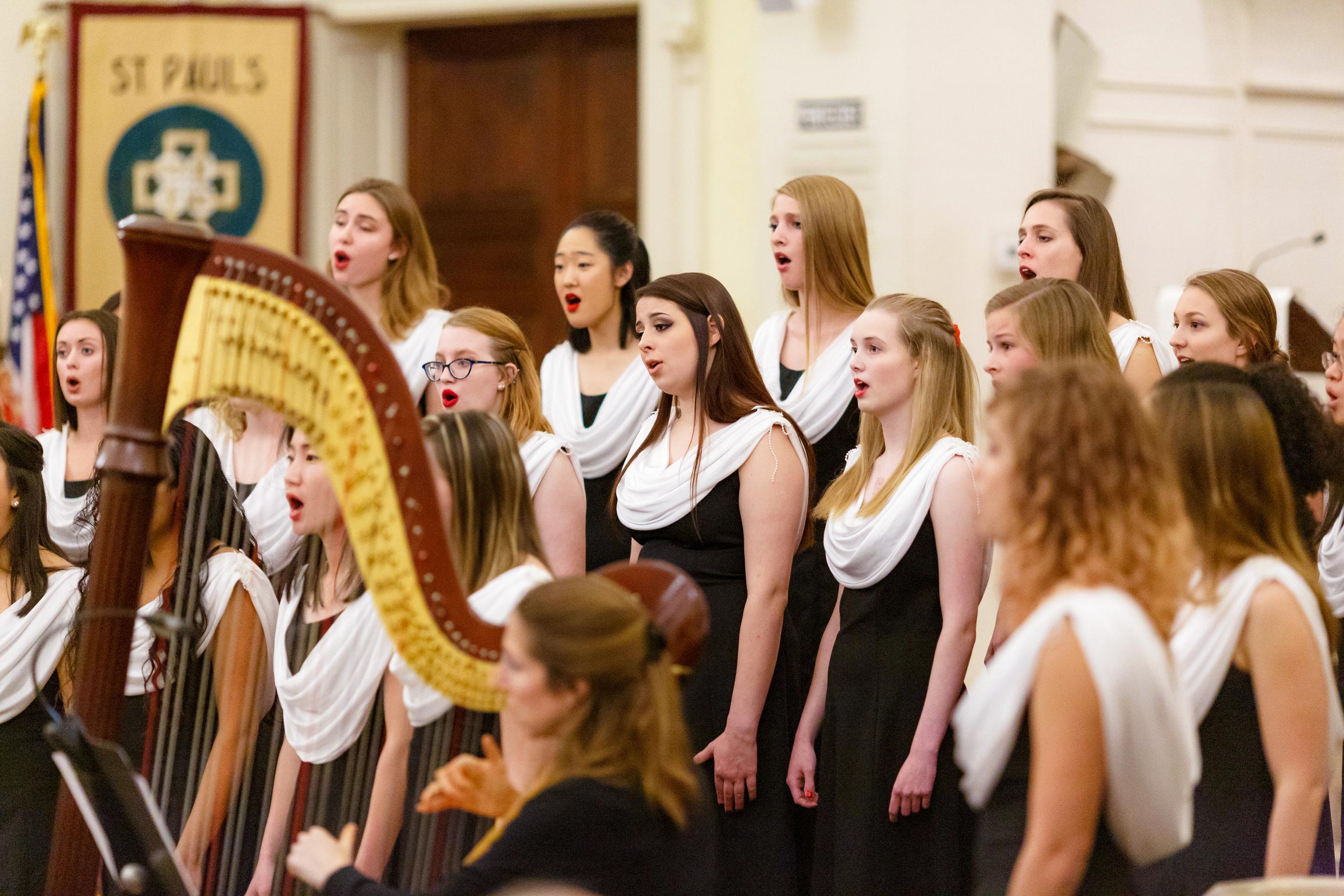 The Virginia Women’s Chorus includes undergraduate and graduate students from many different schools at UVA. (Photo by Zurgis Photography)

For third-year University of Virginia student Julia Kothmann, the best part of each Virginia Women’s Chorus concert is the end – and she means that in the best way possible.

Her mom, Andrea Kahn-Kothmann, a former president of the chorus, typically takes the stage with her for the chorus’ last song, joining current students and other alumni in a rendition of “Simple Gifts,” a folk song that has become the women’s anthem.

“She always comes up and sings with me,” Kothmann said. Andrea, a Philadelphia attorney who has photos of a young Julia attending Women’s Chorus concerts, has only missed one concert in her daughter’s four years at UVA.

“It’s very special to be able to sing with my daughter,” she said.

Mother and daughter will take the stage again Saturday afternoon for the chorus’ spring concert, “A Celebration of Women and the University.” (Find information about the concert and tickets here.)

The chorus will commemorate UVA’s bicentennial with a series of short vignettes highlighting women who achieved important firsts at UVA, including women like E. Louise Stokes Hunter, who earned her doctorate in education and became the first black woman to graduate from UVA; Virginia Scott, who challenged the University’s admission policy on coeducation; and President Emerita Teresa Sullivan, the University’s first female president.

The concert also will include the premiere of “Bluebell,” an original piece commissioned by the chorus from composer Ola Gjeilo. The piece, supported with funding from the Jefferson Trust, is based on two Emily Brontë poems.

“We are so excited about the piece and the concert,” Kothmann said. “We want to highlight women’s influence in music and at UVA, and show how the chorus has influenced so many women at UVA.”

The chorus, founded in 1974, is the oldest women’s music organization affiliated with the University and was traditionally paired with the all-male Virginia Glee Club for some performances and other events. In fact, that is how Kothmann’s parents met – Andrea was president of the Women’s Chorus at the same time her husband-to-be, Bruce Kothmann, was president of the Glee Club. Both were thrilled that Julia selected UVA and chose to be in the chorus.

“When your kids go through the college search process, you realize how many factors can lead them to one place or another, so the fact that she ended up being interested in and admitted to the same place my husband and I did is pretty special,” Kahn-Kothmann said.

Kahn-Kothmann was president of the chorus in 1989, a year of transition as the McIntire Department of Music elected not to continue funding single-sex choral organizations like the Women’s Chorus and the Glee Club. The Glee Club, with years of alumni support under its belt, had enough resources to immediately become an independent student organization on Grounds.

With just 15 years of existence, the Women’s Chorus had fewer alumnae and had to go on hiatus. But by 1995, current conductor KaeRenae Mitchell, a 1976 UVA graduate who also started the Virginia Belles a cappella group, and many alumni had marshalled the funds needed to restart the chorus as an independent student group.

“It has been going strong since,” Kahn-Kothmann said.

Julia Kothmann and the 40 other members of the chorus spend at least four to five hours rehearsing and practicing each week, with members of the student-run managing board dedicating additional hours.

They put on several concerts each year, including a popular holiday candlelight concert and concerts benefitting organizations like the Sexual Assault Resource Agency or UVA’s Maxine Platzer Lynn Women’s Center.

They also spend a lot of time together, simply because they like each other’s company.

“It’s so wonderful to see the friendships that develop and continue long past graduation,” Mitchell said. “The chorus becomes a home away from home for them.”

Kothmann, now about to enter her final year at UVA, said the chorus has been important part of her college experience.

“It’s wonderful to have this space, of women brought together by our love of music, from different schools and majors, all different backgrounds,” she said. “Having that space, and getting to share that with the community and bring joy to people, has really made me feel at home at UVA.”

Here Is What You Need to Know About the New Coronavirus Variant, Omicron END_OF_DOCUMENT_TOKEN_TO_BE_REPLACED

Fall Is in the Air on Grounds END_OF_DOCUMENT_TOKEN_TO_BE_REPLACED

Meet the Cats and Dogs Your CVC Donation Supports END_OF_DOCUMENT_TOKEN_TO_BE_REPLACED