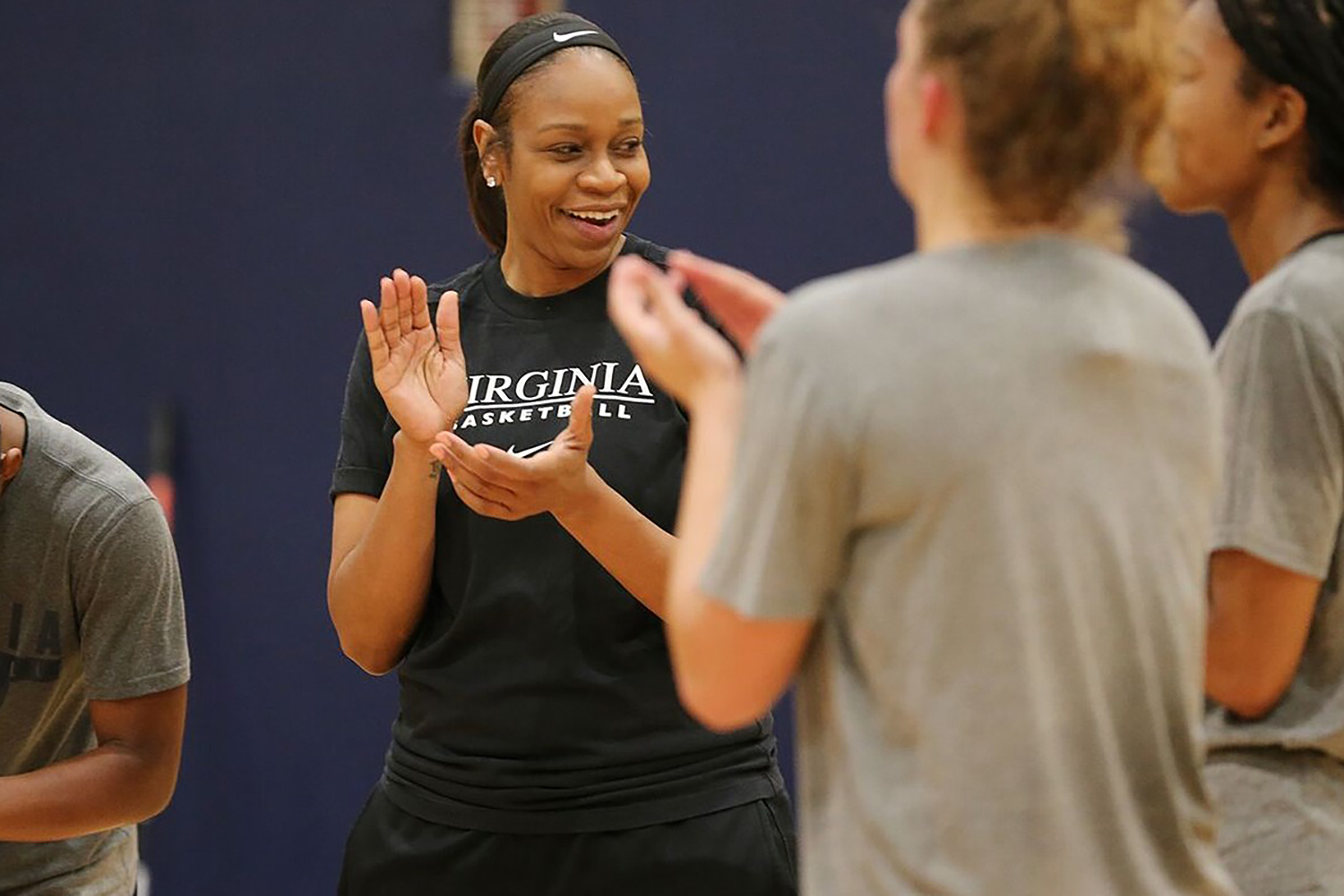 Her introduction to basketball, in Los Angeles’ Culver City neighborhood, came from her older brother, Tommy, with an assist from his buddy David Fizdale, who’s now the head coach of the New York Knicks.

Tina Thompson was 9 years old, and she was hooked, even if she didn’t immediately impress on the court.

“I wasn’t decent until I was about 11,” Thompson, the first-year head coach of the University of Virginia women’s team, said recently in her John Paul Jones Arena office.

Once her ascension in the sport began, it continued with startling speed. But even as Thompson established herself as a force in the L.A. area, first at Morningside High School and then at the University of Southern California, she didn’t dream of one day joining the legends of the game in Springfield, Massachusetts.

This weekend it becomes official! Just two days until @IamTinaThompson joins the best in the @Hoophall! Her career accomplishments are #GoHoos #18HoopClass pic.twitter.com/AgvqG2Fq9K

“I don’t know about anybody else, but I think that I’m safe to say that never, ever in my life have I ever said or written down that I’m going to the Naismith Basketball Hall of Fame, that this is my goal,” Thompson said.

That might not have been her goal, but it’s about to become her reality. On Friday night, Thompson, 43, will be enshrined in Springfield as part of a 13-member class.

Starting at 7 p.m. Friday, NBA-TV will broadcast the enshrinement ceremony.

The Hall of Fame’s Class of 2018 was announced in late March at the NCAA men’s Final Four in San Antonio, Texas. For Thompson, the response from friends, relatives, former teammates and former coaches was overwhelming.

“It took me weeks to return the messages and calls,” she said, “because it was just so much.”

Thompson, who flew to Massachusetts on Wednesday for the start of the festivities, knows many Hall of Famers. Asked what they’ve told her about the three-day celebration in Springfield, Thompson smiled.

“That it’s going to be a blur,” she said, “the most exciting and overwhelming experience that you’ll have in your life, and you won’t be able to immediately recall all the things that happen, because it just happens so fast that it’s literally going to take time for you to collect all the pieces.”

Cheryl Miller, who was enshrined in the Hall of Fame in 1995, will present Thompson. Miller starred at USC in the 1980s and later coached Thompson there.

“I’m still blown away by the fact that my coach was Cheryl Miller, and I have an unbelievable relationship with her,” Thompson said. “She’s my friend and she’s my family, but at the end of the day I still think and say she’s the greatest basketball player of all time.”

After finishing her career at USC, Thompson became the first player selected in the inaugural WNBA draft. She was a nine-time WNBA All-Star and helped the Houston Comets win four championships.

Thompson retired from the WNBA in 2013 as its all-time leading scorer. She also won two Olympic gold medals with Team USA and won multiple championships playing professionally in Europe, where her teammates included Sue Bird, Diana Taurasi and Lauren Jackson.

And she did it all as a post player who, at 6-foot-2, was shorter than many of the opponents she battled in the paint.

Her parents set an example that inspired Thompson.

“I totally believed,” she said. “My dad was a blue-collar guy. He had his own carpentry and construction business. He worked with his hands. It was really, really hard work, and he had really long hours, so it was nothing that I was unfamiliar with, working. My mom was a housewife [raising] five children. Her days were really long. There was work around me, in a sense. It was just kind of something that you do if you want to be good at whatever it is. And my dad was a very good carpenter. My mom was a very good housewife.”

As a girl, Thompson also played softball and volleyball. “Neither one of them lasted long,” she said, laughing.

With volleyball, it “was the sliding and diving with your knees that just didn’t work well for my basketball psyche,” Thompson said. “I was a great blocker and hitter, but digging was not my forte.”

She fell hard for basketball, and her passion has never waned. Until she was told she “absolutely had to play with girls,” Thompson recalled, she competed against boys, including her big brother and Fizdale.

“On those many days and nights and every day of the summer when we were in the gym, David was the one person that was with us all the time, morning till night,” Thompson said.

Her son, Dyllan, her brother and her mother, as well as Fizdale and his wife, Natasha, will be among those with Thompson in Springfield.

When she learned she’d been selected for the Hall of Fame, Thompson told NBA-TV in a recent interview, “I was literally overwhelmed. Even to this day – it’s been months now – I just can’t believe it.

“I get a little uncomfortable just talking about it, because then you start thinking about the game and the history and what being in the Hall means and all of the players that I have so much admiration for and I’ve just grown up watching my entire life. To think that I’m going to be housed with them, it’s unbelievable. Because it’s not something you think about happening for yourself.”

A Year We Will Never Forget: 2019-20 in Review END_OF_DOCUMENT_TOKEN_TO_BE_REPLACED

‘What Will You Carry With You?’ Remarks From UVA President Jim Ryan END_OF_DOCUMENT_TOKEN_TO_BE_REPLACED