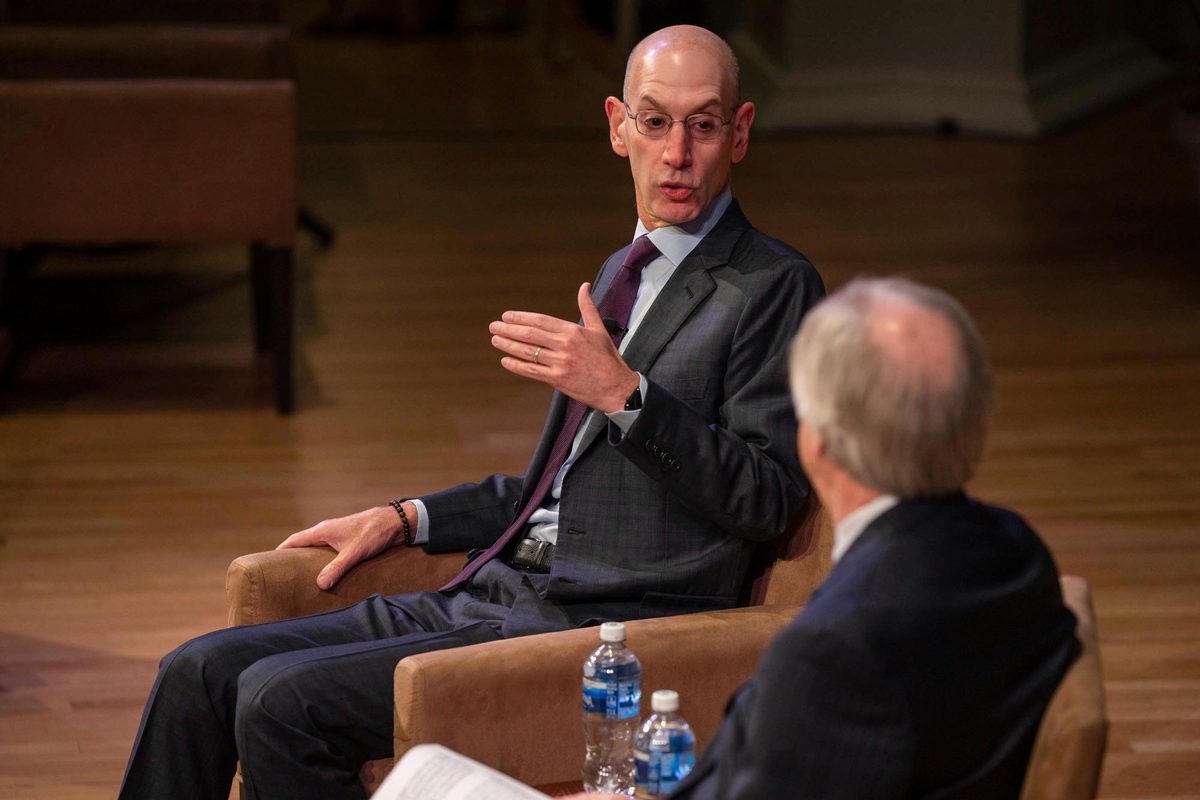 Hundreds of students and community members in Old Cabell Hall Friday morning got a courtside seat to the business of professional athletics as NBA Commissioner Adam Silver visited the University of Virginia for the McIntire School of Commerce’s fall forum, “The Business of Sports.”

Following Silver’s opening conversation with Carl P. Zeithaml, the John A. Griffin Dean of the McIntire School, two panels addressed the evolution of the sports industry, with participants ranging from Nike and Disney executives to leaders of the NFL’s Seattle Seahawks and the NHL’s Philadelphia Flyers. All of them attended McIntire and had advice for students in the audience hoping to work on the business side of their favorite sports.

“As sports have grown in value and prominence, sports leagues, athletic teams and franchises have adopted state-of-the-art business strategies and systems,” Zeithaml said while introducing Silver.

“They are also subject to many of the same forces that, for better or worse, face all major industries,” he said, citing globalization, human rights and labor issues, the growth of data analytics and more.

The NBA has been at the center of one such issue over the past two weeks, after Houston Rockets General Manager Daryl Morey tweeted his support for pro-democracy protestors in Hong Kong just before NBA teams were scheduled to play a series of games in mainland China. The tweet sparked outrage in China; in the U.S., it generated debate among players, politicians and the public about freedom of expression and the league’s burgeoning business relationship with China.

Silver addressed the controversy first thing when he joined Zeithaml on stage. He said he learned of the tweet after stepping off an eight-hour flight to Tokyo, during which time Morey had posted and deleted the tweet and the Houston Rockets had issued a statement that Morey was speaking on his own behalf, not on behalf of the organization.

At first, Silver did not think it would become a large issue. In a global business with more than 450 players from around the world, thousands more employees and millions of fans, clashes between different points of view are inevitable, he said. However, he quickly realized that this particular tweet had taken on a life of its own, with ramifications for the NBA at home and abroad.

He recounted the NBA’s long history in China, and noted that approximately 200 NBA employees work in the league’s offices in China and in Hong Kong. As commissioner, he said, he wanted to strike a balance between supporting the American value of freedom of speech and acknowledging different views within his own league and in China. While Silver was in Tokyo, the NBA put out a statement to that effect.

“We both supported [Morey’s] right to speak, and – and this is what became controversial – said in the statement that we regretted offending our friends and fans in China,” he said. “I didn’t see anything in that moment inconsistent between supporting freedom of expression, but also recognizing that it was clear there were going to be consequences in China.

“I felt I was being diplomatic in both acknowledging to our Chinese friends that we understand they have a different perspective on freedom of expression and the substance of the tweet, but also saying we are an American company with American values that we are going to continue to uphold.” 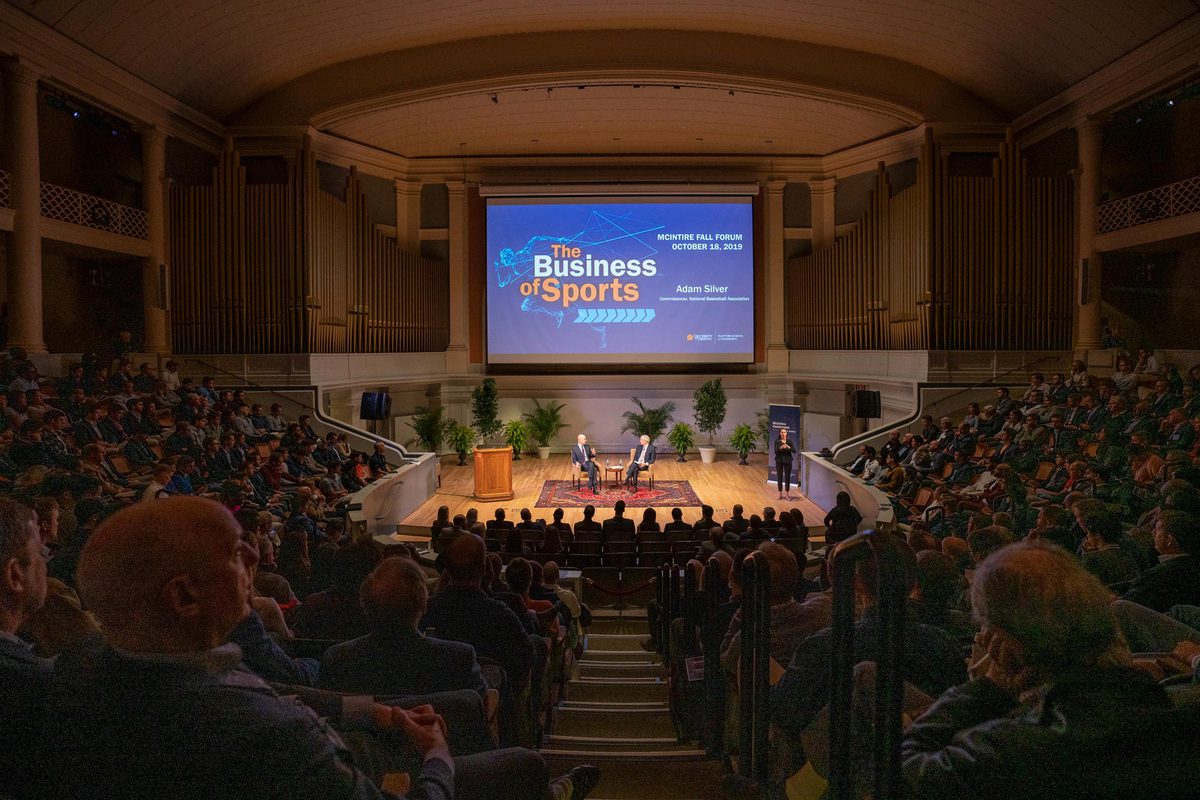 Now, he said, he is looking for opportunities to de-escalate the situation and, he hopes, to bring people with different perspectives together through sports.

“Sports as a platform has often been used to shine light on issues around the world,” Silver said. “There is no question that people are now talking about Hong Kong, and about freedom of expression, in a way they were not before, and from an American standpoint, that is a positive thing.”

Going forward, he said, not engaging with China would be “a mistake.”

“Through constructive engagement, mutual respect and people-to-people relationships, we can build shared experiences, develop empathy for each other, a better understanding of each other, and a willingness to listen to each other,” Silver said.

It’s a purpose-driven model that he compared to higher education and its mission to bring opportunity to people of diverse backgrounds and give people the tools they need to succeed.

“When we look to bring basketball around the world, we also talk about physical fitness, mental health … a team sport that is nonviolent and, critically important, teaches young people lessons that they can apply in other aspects of life,” he said. “Most people who work at the NBA did not choose this life as a job – we really believe in what we are doing, similar I imagine to professors here who don’t see their work as just a paycheck. It’s purpose-driven work.”

Outside of China, the league recently played its first games in India and plans to launch a league in Africa in March. A huge part of that expansion, Silver said, is smartphone technology.

“It completely changed our game,” he said. “We can share our sport directly with virtually anyone with an internet connection. There are roughly 1.6 billion people worldwide who participate in our NBA community in some way.”

In addition to discussing the NBA’s global growth, Silver and Zeithaml talked about keys to success that he wanted to share with students in the audience, including the ability for the best talent to cross borders around the world; willingness to embrace new technology, rather than fight it; and the importance of being transparent and being a good listener.

They also discussed sports betting in the United States, where it is now legal in 11 states. When Silver became commissioner in 2014, he wrote a New York Times op-ed in support of sports betting as part of the fan experience.

“It is legal in most countries outside of the United States, and a hugely popular part of the fan experience,” he said on Friday. “My view is that we would be better off with a regulated, transparent market.”

Silver took several questions from the audience, including questions about promoting sportsmanship, the logistics of expanding the league in Africa and the possibility of a Chinese league that could compete with the NBA – competition that Silver said he would welcome.

He also discussed the importance of diversity in the NBA, and how he has worked to promote those values as commissioner through programs like a recent initiative to bring more women into refereeing and coaching.

“One thing I have learned on the job is that it’s one thing to talk about a lot of things – and it is important to make those statements … but you need to ensure that you are putting programs in place,” he said. “None of these things will happen automatically, even if people are well-meaning.”

Following Silver’s remarks, McIntire alumni took the stage to share their own window into the sports industry in two panel discussions. 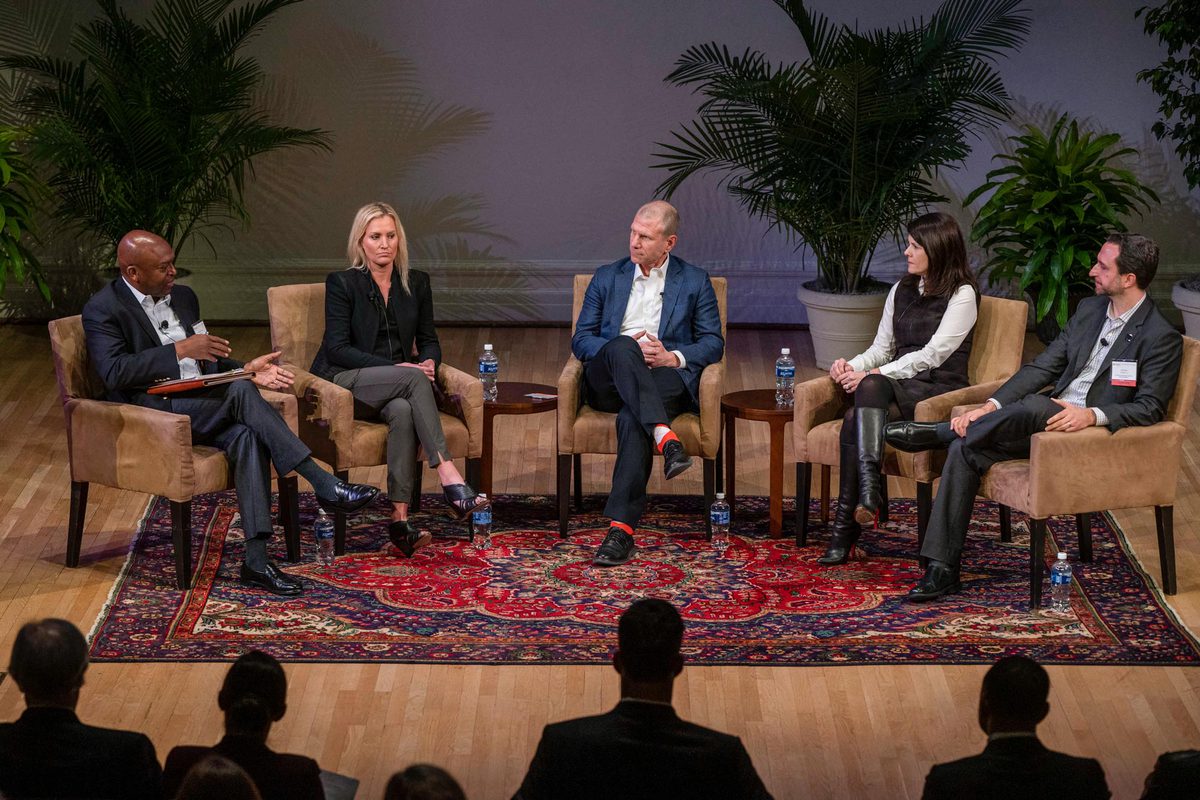 Panelists discussed how changing technologies have shaped their respective work, how they are working to appeal to the next generation of athletes and fans, and the changing role of athletes, as more of them build powerful brands that can rival any company. Each closed with some advice for the students in the audience, based on their own experiences working their way up in their industry.

Like Silver, they said that watching sports bring people together was the best part of their jobs.

“We are creating connection, commonality and something positive in the community,” Camillo, of the Philadelphia Flyers, said. “Organizations that have bound communities big and small are changing, but everyone can get excited about sports and their sports franchises. … When that is your job every day, it’s a pretty powerful thing and a pretty positive thing.”

Ahead of Thanksgiving, Hoos Look Back With Gratitude END_OF_DOCUMENT_TOKEN_TO_BE_REPLACED

The Cavalier Marching Band Marches On – Even When Apart END_OF_DOCUMENT_TOKEN_TO_BE_REPLACED