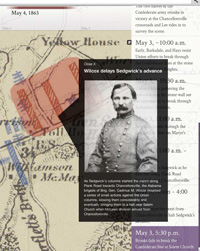 July 5, 2012 — A new digital humanities tool that lets scholars merge maps, timelines, archives and artifacts to create online narratives about everything from H.P. Lovecraft to Civil War battles debuted this week at the University of Virginia.

Neatline is online software created by the Scholars' Lab in the U.Va. Library, and its creators hope it'll be a valuable new publishing and teaching tool for humanities scholars across disciplines.

Neatline is a digital toolkit for scholars who want to use maps and timelines to tell stories and make arguments about their subjects, said Web applications specialist David McClure, who helped build Neatline.

"The goal is to help scholars do really creative work," McClure said.

Because using Neatline doesn't require the large geographic data sets often associated with map-based digital humanities projects, it allows scholars from nearly any field in the humanities to do map-based work, he said.

In one example built to demonstrate Neatline's capabilities, Scholars' Lab staff used maps of the 1863 Battle of Chancellorsville drawn by Jedidiah Hotchkiss, Stonewall Jackson's cartographer. The maps are part of the Hotchkiss collection housed in the Albert and Shirley Small Special Collections Library.

In the Battle of Chancellorsville exhibit, Hotckiss' battlefield maps are imposed over a modern map of the battlefield area.

Major elements of the battle are graphically represented on the maps, and users can click on them for pop-up descriptions of troop advances and other developments. A timeline at the top of the page moves through the three days of the battle, and the events depicted on the map change accordingly for each day.

Another example, "'I am it, and It is I': Lovecraft in Providence" was created by a U.Va. undergraduate. It connects short passages from the letters of horror writer H.P. Lovecraft with the geography of his home city in Rhode Island.

Another demo shows how Neatline can be used with contemporary information. It maps the location of 60 technology firms in Silicon Valley. Users can click on company logos to get a description. So far, 11 examples of "Neatline in Action" have been shared on the project website.

Neatline can be used to express a fully formed scholarly argument or to explore a broader subject and look for connections that wouldn't otherwise be apparent, said Bethany Nowviskie, the library's director of digital research and scholarship.

"It's both an expressive and an exploratory instrument," Nowviskie said. "You can share what you already know about the spatial and temporal aspects of your subject, or you can use it in an experimental mode, sketching out various interpretations, graphically and iteratively, until something clicks."

Andrew Stauffer, an associate English professor in the College of Arts & Sciences and director of the NINES Project, is using historical maps in Neatline to investigate a poem Lord Byron wrote about the Po River in Italy in 1819, when Byron was traveling from Venice to Ravenna.

"He wrote the poem addressing the Po as flowing 'by her native walls' of Ravenna, yet the Po delta is significantly north of that city," Stauffer said. "Scholars have wondered about Byron's mistake, but it seems he was thinking of earlier courses of the river – in ancient Roman days and in Dante's time – when the Po did flow much closer to Ravenna.

"Neatline will allow me to layer historical maps and visualize the changing course of the Po River and the shape of the Adriatic littoral, and so understand Byron's own layered imagination of Italy as a literary and historical landscape," he said. "I'm impressed by the ease and power of Neatline as a framework for integrating spatial analysis into humanities scholarship."

Nowviskie said Neatline shows that the traditional skills and values of humanities scholarship remain important in the digital world.

"One thing I love about Neatline is that it asserts the enduring value of close reading and hand-craftedness in a world of data-mining and automated, algorithmic visualization," she said.

Neatline is available as a free download and is built to work with Omeka, a Web publishing tool developed in conjunction with George Mason University.

Users who want to experiment with Neatline before downloading can use a browser-based version, or "sandbox," which only lacks the ability to import historic maps. This feature will also facilitate Neatline's use as a teaching tool, McClure said.

"There's been a lot of interest here in using Neatline in the classroom," he said. A next step for the Scholars’ Lab will be to create a special Neatline sandbox for use in U.Va. courses.

Professors could use it to illustrate lectures or set up collaborative projects for their students. The sandbox allows instructors to avoid asking each student in a class to download Omeka and then install the plug-ins that make Neatline work.

Wayne Graham, head of research and development for the Scholars' Lab, described the project's next phase. "A downloadable Neatline is great for intensive research projects," he said. "But we also want to lower the barriers for classroom use."

What’s Next for UVA’s Class of 2022? END_OF_DOCUMENT_TOKEN_TO_BE_REPLACED