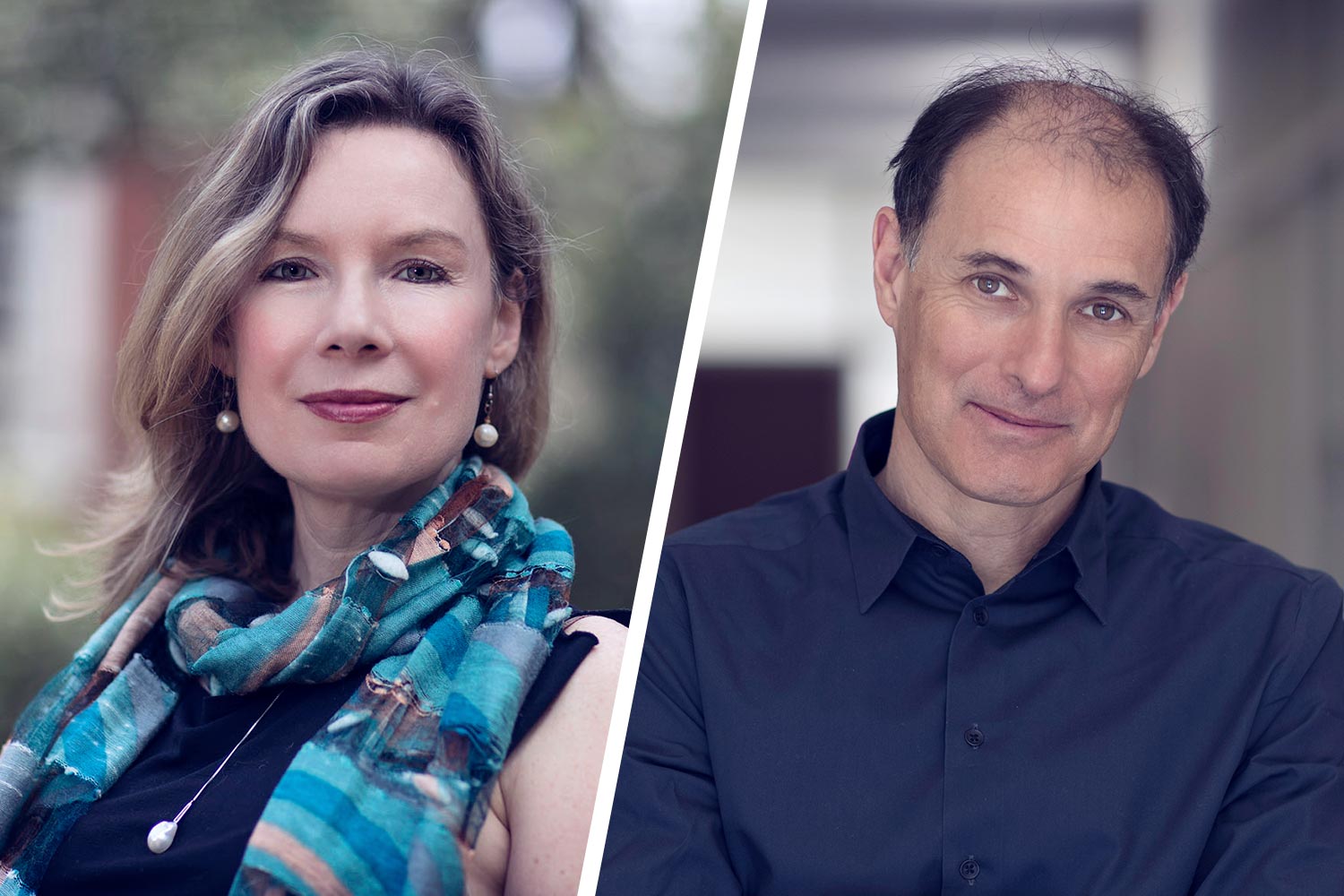 Two University of Virginia professors are among the new group of 173 Guggenheim Fellows, announced April 4 by the Board of Trustees of the John Simon Guggenheim Memorial Foundation.

Anna Brickhouse, professor of English and American studies, was awarded for her next book on “Earthquake Aesthetics: Catastrophe and the Forms of Critique.” History professor Thomas Miller Klubock will work on his book project, “Nation of Rivers: A History of Water and Water Wars in Modern South America.”

Brickhouse and Klubock also happen to be co-directors of the Americas Center/Centro de las Américas, which promotes the interdisciplinary study of the arts, cultures, histories and societies of the Americas at UVA. They applied for the Guggenheim Fellowship independently.

Brickhouse’s “Earthquake Aesthetics” project draws on a wide array of writings over several centuries and continents and across multiple languages. The book moves from 16th-century Peru to 18th-century Europe, and from 17th-century New England through to the contemporary U.S. It will trace when, how and why the figure of earthquakes – and by extension, catastrophe more broadly – has been used in literature and philosophy to shape ideas about colonialism, slavery, and the supposedly inherent optimism of modern America. The book considers the role of catastrophe throughout the history of the Americas as a recurrent eruptive force – both naturally and metaphorically.

Klubock’s current book project is an environmental history of rivers in Chile, with a focus on the borderlands between Chile, Argentina and Bolivia. The book develops his interest in the relationship between social and ecological change by exploring the history of local, regional and transnational struggles over water and water rights in South America during the 19th and 20th centuries.

Guggenheim Fellowship awardees, appointed on the basis of prior achievement and exceptional promise, comprise a diverse group of scholars, artists and scientists, and were chosen from a group of almost 3,000 applicants in the foundation’s 94th competition.

Writers from the Americas over the past few centuries, it turns out, have used earthquake as a metaphor for colonialism and indigenous unrest or undoing.

Back in the 16th century, El Inca Garcilaso de la Vega, born in Peru in 1539 the son of a royal Inca woman and a Spanish conquistador, used the idea “terremoto,” or “land of earthquakes,” to describe the effects of colonialism and indigenous revolt against what was actually a fragile system.

Brickhouse has been exploring the influence of Garcilaso on European Enlightenment philosophers more than a century later, including John Locke and Voltaire. During the same period in the mid-18th century, earthquakes and subsequent tsunamis devastated Lima-Callao, Peru in 1746 and Lisbon, Portugal in 1755. Both catastrophes spurred thinkers and philosophers to reconsider previous ideas about the world order.

A few decades later, on the North American continent, a series of earthquakes in Missouri devastated the area from late 1811 to March of 1812. Over those several months, thousands of tremors rocked the central Midwest and especially part of Missouri near the junction of the Ohio and Mississippi Rivers. Three quakes in New Madrid had a magnitude of 7.5 or greater.

Now, they are all but forgotten.

“The U.S. has suppressed its own history of catastrophes on a national level and has displaced that view as Latin American phenomena,” Brickhouse said.

She will look at how some contemporary writers have interpreted the symbolic power of earthquake and catastrophe, specifically Edwidge Danticat, Junot Díaz, Toni Morrison and Rodrigo Rey Rosa.

In a lecture Brickhouse gave recently describing her project, she wrote about another factor in studying works written in English, French and Spanish: “The long history of the Americas may be productively read, I propose, as a series of mistranslated catastrophes, as a history of the mistranslation of catastrophe. … I want to propose a broader view of catastrophe as part of a centuries-long textual network in which narratives of disaster cross languages and time zones, re-emerging with new but often distorted or mistranslated meaning.”

Brickhouse’s project on the literary history of catastrophe partly explores events in South America, crossing some of the same territory as Klubock. In fact, a 1996 novel by the late Chilean writer Roberto Bolaño also inspired her to follow this idea of “earthquake aesthetics,” she said. In “Estrella Distante,” Bolaño’s narrator imagines the Augusto Pinochet dictatorship, which lasted from 1973 to 1990 in Chile, as “an earthquake of history.”

“A central problem in narrating this political catastrophe is the failure of translation,” she said, explored through the misunderstood testimony of an indigenous witness whose account of state-sponsored murders reaches back and encompasses the long history of European conquest, shocking the judges.

The Guggenheim Fellowship will enable Brickhouse to extend a sabbatical for the whole academic year, so she will have time for research trips, as well as for reading and writing.

Brickhouse received her B.A. in English and French from UVA in 1990 and her Ph.D. in English from Columbia University in 1998. Her second book, “The Unsettlement of America: Translation, Interpretation, and the Story of Don Luis de Velasco, 1560-1945,” published in 2014, received the James Russell Lowell Prize from the Modern Language Association, as well as the inaugural Early American Literature Book Prize.

Klubock, a history professor, director of the Latin American Studies program and co-director of the Centro de las Américas/Americas Center, received the award to fund research for his current book project on water wars in South America.

“It is a great honor to be included in such a prestigious group of artists and scholars,” Klubock said. “I was also pleased to receive the Guggenheim at the same time as my colleague, Anna Brickhouse, with whom I have collaborated to make the study of the Americas a presence here at UVA.”

In his book, Klubock said he is seeking to “illuminate a long history of struggles over water, disputes that are local, regional and transnational.

“I look at the borderlands areas between Chile, Bolivia and Argentina, which are crossed by rivers, and the ways multinational energy and mining companies and local actors, including peasants and indigenous communities, understood rights to water and fought over those rights, going back to the mid-19th century.”

He said the book will also examine the rivers’ role in resource extraction.

“It will look at the ways rivers have been used, mainly in extracting the waters’ value through hydro-electric projects,” Klubock said. “The Guggenheim will allow me a semester of leave, which I will use to travel to Chile, Bolivia and Argentina for archival research.”

After graduating from Haverford College in Pennsylvania with a degree in history and philosophy, Klubock interned at the Institute for Policy Studies in Washington, D.C. There he became interested in Chile while working with exiles from the Pinochet dictatorship in Chile, which led to an abiding interest in human rights in Chile and U.S. relations with the country. He also discovered he really enjoyed the research.

Klubock joined the UVA faculty in 2008, along with his wife Sandhya Shukla, an associate professor in the English Department and American Studies program.

“It is difficult to find two academic positions at a leading research university,” he said. “We’ve been really happy here. It’s a great place to teach. It is very supportive of scholarship. The students are excellent and Charlottesville is a wonderful place to live.”

What Is the ‘4th Side’? END_OF_DOCUMENT_TOKEN_TO_BE_REPLACED