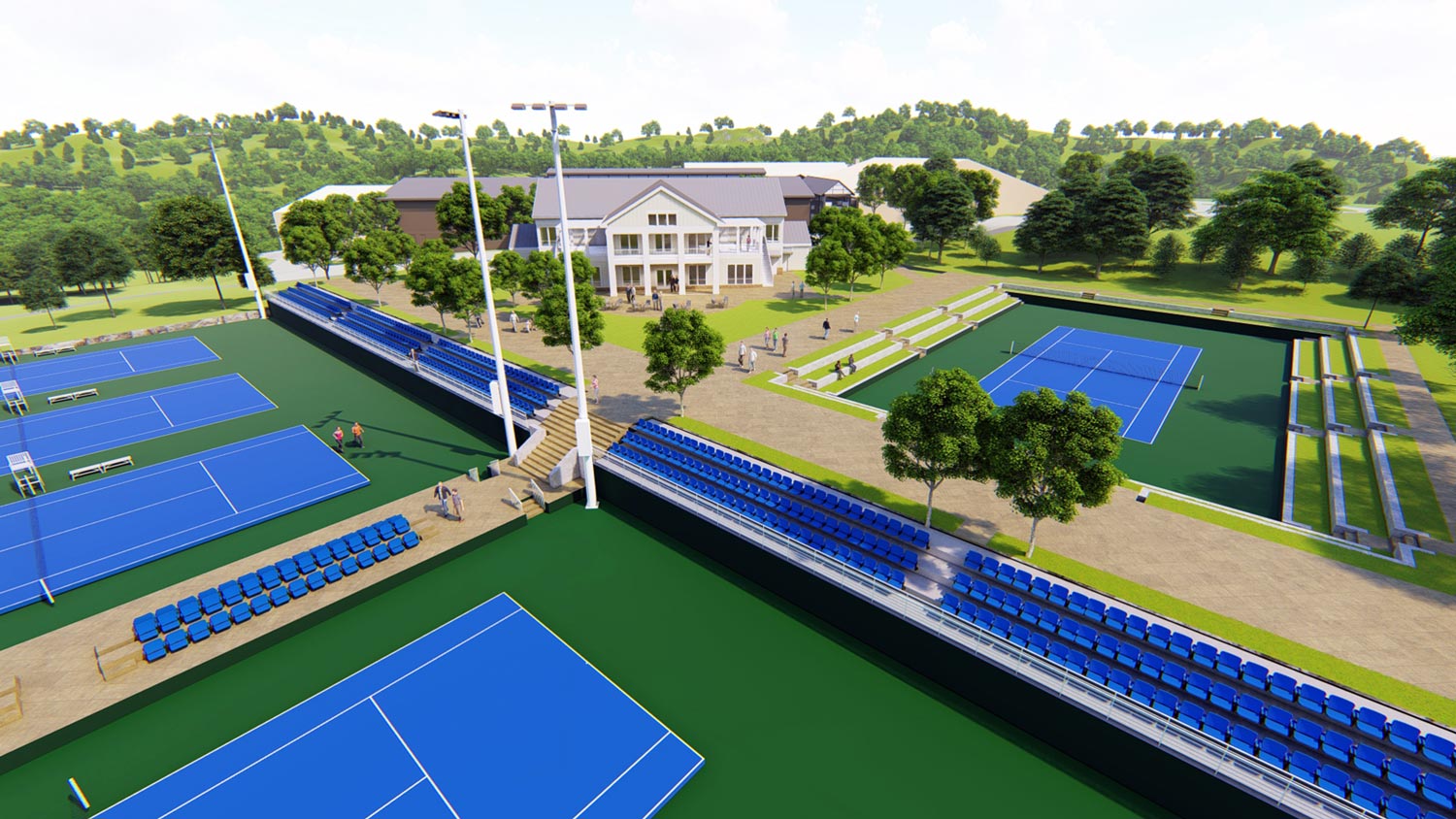 For decades, the Sheridan Snyder Tennis Center has served the University of Virginia and the local community well.

Located on Grounds next to Memorial Gymnasium, Snyder has also been the outdoor home of the UVA men’s and women’s teams since 1997, and they’ve celebrated countless memorable victories there. Building on this successful history, a new chapter in Virginia tennis will be written at another site.

UVA plans to build a new outdoor tennis complex adjacent to the Boar’s Head Sports Club. The impetus for the project was the lead gift committed by the Altec/Styslinger Foundation last year. Since receiving the gift, the athletics department has been working with Director of Tennis Andres Pedroso, who is also the head men’s coach, and head women’s coach Sara O’Leary to design the new home for Virginia tennis.

“We are extremely grateful to the Altec/Styslinger Foundation for their remarkable commitment to helping us make this facility a reality,” Director of Athletics Carla Williams said. “Their lead gift created the momentum we needed, and we are confident our tennis supporters will help us bring the project to completion. The future is very bright for both programs.”

The Styslinger family’s connection to the tennis program began with Mac Styslinger, who helped UVA capture three NCAA team titles (2013, ‘15 and ‘16) during his college career. As a freshman in 2013, he teamed with Jarmere Jenkins to win the NCAA doubles championship.

“I think Mac had a great experience here, and as a result his entire family has made UVA tennis an integral part of their lives,” Pedroso said.

The Cavaliers’ indoor courts are already located at the Boar’s Head, next to the McArthur Squash Center. The new outdoor complex will include six collegiate competition courts and one exhibition court, as well as a pavilion that will house locker rooms, coaches’ offices, a strength and conditioning area, a sports medicine area, space for academic support and a nutrition station.

“I think it’s going to be the best facility in the ACC and likely in the country,” Pedroso said. “It’s a major game-changer for both programs.”

Currently, UVA coaches spend some of their time at the McCue Center, some at the Boar’s Head, and some at Snyder, where the teams’ locker rooms are housed in the nearby Lady Astor building.

The players “get the vast majority of their physiotherapy, their treatment, in the McCue Center or in University Hall,” Pedroso said, “while the location of our tennis training varies from Snyder to the Boar’s Head, depending on the weather.”

That will change when the new complex is built.

“First and foremost,” Pedroso said, “it’s going to enhance our student-athletes’ lives and their day-to-day schedules, as far as having everything in one place – indoor, outdoor, strength and conditioning, physiotherapy – and just co-existing in one place where they train, compete and recover in a professionalized atmosphere. The facility will also take advantage of the Boar’s Head’s spectacular views.”

O’Leary said: “It’s going to be an incredible place for the student-athletes. The facility allows us to consolidate all of the resources they need in one location, and being right next to the indoor courts, only further enhances the quality of their overall training experience.”

For the coaches, O’Leary said, “I just think we’ll be able to be so much more efficient with our time, because we’ll be at one location. We can come in, go into our offices, meet with the athletic trainer, and walk out to the courts for an individual workout. The facility will only heighten our focus on player development, team-building, and world-class communication among the coaches and players.”

The project, which is in the design phase, is expected to cost approximately $10.5 million, which does not include annual operational and maintenance expenses. A final cost estimate is expected to be completed by December.

Including the lead gift from the Altec/Styslinger Foundation, the Virginia Athletics Foundation has raised $8.2 million for the project. With the conceptual study completed, the fundraising campaign for the project will intensify. Construction on the new complex will not start until fundraising is complete.

“There are a number of attractive naming opportunities throughout the facility for donors to consider as we create this first-class facility,” VAF Executive Director Dirk Katstra said. “We are excited to complete the fundraising so the facility can be built as soon as possible and the student-athletes can begin to take advantage of all it will have to offer and compete on the new courts.”

The project will also include seating for approximately 1,000 spectators, as well as a video scoreboard with scoring for individual courts, an artificial-turf surface for training, a central plaza and a covered terrace in the pavilion overlooking the courts.

“For spectators, it’s going to be phenomenal,” Pedroso said. “As you enter the facility, you will be able to look out across all the courts, including the stadium court. With the mountain views and [Birdwood] golf course in the background, I can’t think of a more beautiful setting.”

One of the unique pieces of the project will be the stadium exhibition court, a feature found at “some of the best facilities in the United States and in Europe and South America,” Pedroso said.

O’Leary said the exhibition court is “something very unique in collegiate tennis. The exhibition court provides our tennis programs with the opportunity to host big-time professional tournaments, as well as a private, intimate training setting for both UVA players and Cavaliers currently on the ATP/WTA tours.”

Former UVA players now “on the professional circuit are going to use our facility as a part-time or full-time training base, which is the type of environment we’re trying to build in Charlottesville,” Pedroso said. “I also think it provides UVA tennis and the Boar’s Head with a new platform to change lives, through the game of tennis, as well as expose the community to an exceptional level of tennis for everyone to enjoy.”

The new complex also figures to have a significant impact on recruiting.

“This allows us to be on a completely level playing field in terms of recruiting,” O’Leary said. “We want to create a facility that is best-suited for our program’s future. We’re really doing everything we can to make it a phenomenal place for the student-athletes to train, study and build lifelong friendships.”

The original concept of a new outdoor tennis facility was developed prior to 2015, as the men’s program was in the midst of a string of national championships under head coach Brian Boland, who left in May 2017 to become head of men’s tennis for USTA Player Development. Boland is now the head men’s coach at Baylor University.

Pedroso and O’Leary believe the new design only increases the quality of the training, competitive and spectator experience, thanks to the unique landscape of the courts, seating arrangements and pavilion. In the end, the facility will also further strengthen the growing bond between the two programs.

“We train throughout the day in small groups, and therefore we have plenty of court space with seven courts,” Pedroso said. “The daily operation of the facility will flow with the way we’re used to communicating and working together in order to maximize the developmental experience for our student-athletes.”

“Both teams are going to be able to spend a lot of time together and work together and support each other and really learn from one another,” she said. “We’re thrilled about that reality.”

For more information about the complex, including images of the facility and fundraising opportunities, visit www.uvatennisfacility.com.

It’s Copperhead Season in Virginia. Here Is What You Need to Know END_OF_DOCUMENT_TOKEN_TO_BE_REPLACED

What’s Next for UVA’s Class of 2022? END_OF_DOCUMENT_TOKEN_TO_BE_REPLACED