New Issue of Inside UVA Highlights the Class of 2007 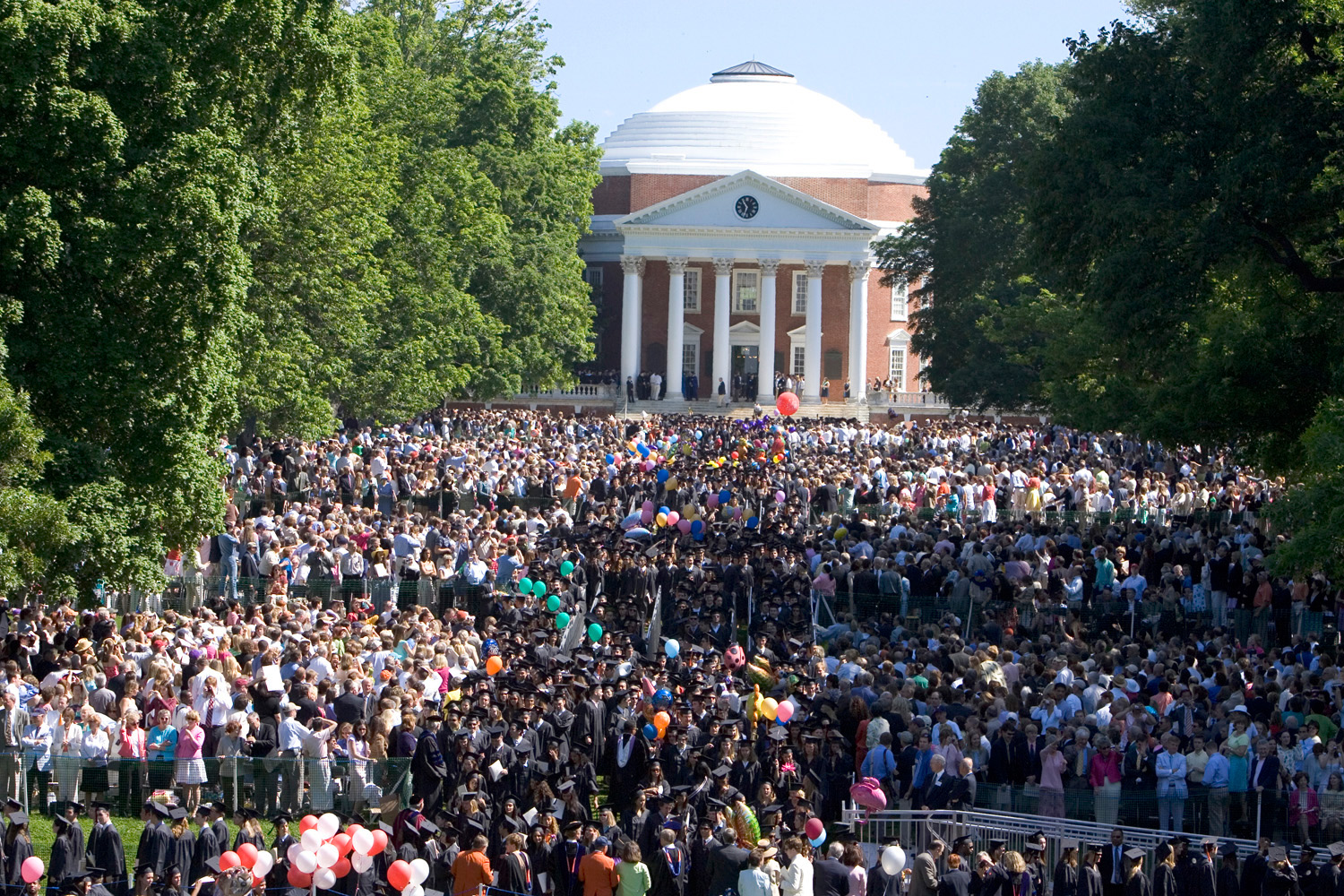 May 18, 2007 -- The remarkable achievements and diverse talents of the University of Virginia’s graduating students are captured each year in the pages of the Inside UVA graduation issue. In years past, we have written stories about the students. This year we let the students tell their own stories — or, in some cases, display their own talents.

“In Their Own Words” presents essays by members of the Class of 2007 in which readers will hear directly from aspiring scholars, humanitarians, artists, doctors, nurses, poets, soldiers, and spiritual and political leaders. There are 21 in all. Twelve follow on these pages. All of the essays will be published on our daily news Web site www.virginia.edu/uvatoday. The essays are complemented by two other sections — “The U.Va. Experience,” in which students replied to a set of questions designed to elicit their thoughts on what U.Va. has meant to them, and “The Graduates’ Art Show,” where a small selection of works provides but a glimpse of the talent of U.Va.’s student body.

One theme that emerged as the planning for this issue unfolded was the discovery that there were numerous “firsts” associated with this year’s commencement. For instance, 2007 marks the first time undergraduates are earning their degrees through the College Science Scholars program. It also marks the first time the University has awarded a dance minor, a bachelor’s degree in statistics and a doctorate in music — all new degree offerings.

Two firsts for the School of Continuing and Professional Studies: a partnership between Tidewater Community College and the school's Bachelor of Interdisciplinary Studies program has produced its first bachelor’s degree recipient, and the school's post-baccalaureate pre-med program boasts its first group of graduates. This year also inaugurates a tradition — the class film, produced by students.

Grisham will speak on May 20 at Final Exercises, following the academic procession, which begins at 10 a.m. More than 30,000 people are expected at the ceremony.

Tinsley, a former U.Va. student, will speak on May 19 at Valedictory Exercises, also to be held on the Lawn, beginning at 11 a.m. The ceremony, organized by the Class of 2007, includes the announcement of class awards and presentation of the class gift.

Degrees being awarded at Finals include:

• 3,367 baccalaureate (38 of these were earned in three years and two were earned in two years)
• 506 first professional degrees
• 2,027 graduate degrees, including 324 Doctor of Philosophy degrees, 23 Doctor of Education
degrees and one Doctor of Juridical Science degree
• 576 degrees to international students, from 84 different countries
• Another 204 students are earning master’s degrees, seven doctoral degrees and 26 education specialist degrees after completing work at centers around the state through the School of Continuing and Professional Studies.
• Total number of degrees awarded to the Class of 2007: 5,900

The History of Final Exercises

Thomas Jefferson’s original plan for the University of Virginia did not provide for a commencement ceremony, or even degrees and diplomas — though early students petitioned the Board of Visitors for diplomas, at least in part to improve their opportunities for employment. The board took no action until 15 months after Jefferson’s death, directing in October 1827 that plans for the first “Public Day” be made.

Thus, the University held its first Final Exercises in 1829. The lengthy ceremony staged in the Rotunda, included student orations and a recitation of the names of students receiving honors. (It wasn’t until 1848 that the speaking was assigned to a single special guest.) There was little other fanfare, as suggested by this tongue-in-cheek comment from the 1887-1888 student yearbook: “In the early period ... the lofty pleasure which attends marching up the central aisle of the Public Hall, and with dumb rapture receiving a fragment of parchment, had not been discovered.”

The “public hall” mentioned above became the second venue for Finals, about 1853, when an annex containing the hall was completed on the north side of the Rotunda. The ceremony remained simple, with faculty and students wearing normal attire rather than caps and gowns.

It is unclear where Finals were held in the years immediately following the 1895 fire in which both the original Rotunda and its annex were destroyed. By 1902, however, Cabell Hall had been built at the south end of the Lawn, and Finals moved to the auditorium of the new building.

The academic procession, which serves as a hallmark of today’s Final Exercises, did not begin until sometime after 1904, when Edwin Alderman became the University’s first president. Lamenting the lack of pomp and circumstance, Alderman directed that graduating students and faculty members — wearing academic regalia — process from the newly rebuilt Rotunda down the Lawn to Cabell Hall.

By 1922, Final Exercises had moved to the new and larger McIntire Amphitheatre. With the exception of the war years, when smaller classes permitted Finals to be held in the Rotunda and in Cabell Hall, commencement exercises remained at the amphitheatre until 1953. That year, University President Colgate W. Darden Jr., moved the ceremony to the southern end of the Lawn, where Final Exercises continue to be held each May. Today, tens of thousands of parents, guests and faculty members watch as the nearly 6,000 students proceed down the Lawn.

Because the academic procession down the Lawn has become such an important rite of passage for graduating students, only the most inclement weather — thunder, lightning, high winds or other conditions that would make the outdoor ceremony unsafe — prompts Finals to be moved indoors to the John Paul Jones Arena.