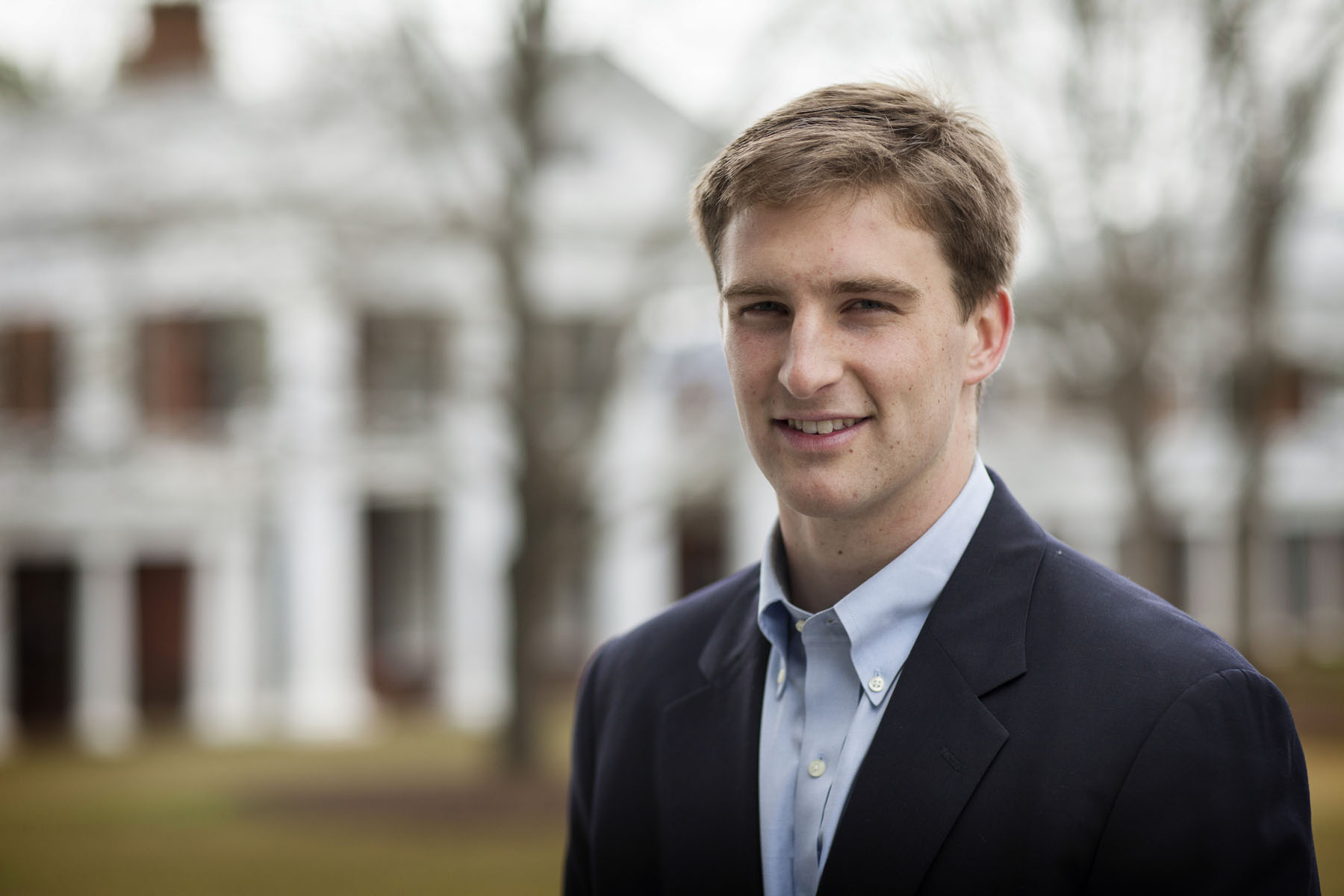 Incoming Board of Visitors student member Blake Blaze says he has no agenda other than serving as a conduit between the board and students as he takes office next month.

The University of Virginia’s Board of Visitors recently appointed third-year student Blake Blaze as its new non-voting student member. His one-year term will begin June 1.

He said he will enter his position with no particular agenda other than to be a conduit between the students and the board.

Blaze is a Jefferson Scholar double-majoring in economics and math, the backup long-snapper for the Cavalier football team, and a member of the Virginia chapter of the Phi Delta Theta fraternity, which is known for “swing dancing and being a little nerdy and awkward,” he said.

The eldest of five brothers, Blaze was class president for all four of his years at Barnstable High School in Hyannis, Mass., on Cape Cod. He was an all-league athlete and captain of the football, basketball and tennis teams, as well as an outstanding scholar who earned nearly 60 Advanced Placement credits during high school – the equivalent of two years of college coursework.

Although he played tight end, tackle, quarterback and punter at various times, he was not a Division I football recruit. He initially planned to attend an Ivy League college, probably Harvard or Princeton, where he would probably be able to play football, he said.

But then he visited Grounds as a finalist for a Jefferson Scholarship and was “blown away,” he said.

“Every person I talked to said they wouldn’t have wanted to be anywhere else,” he said. “I liked those odds.

“I don’t like to speak in hyperbole, but I don’t think there’s another school in the country that offers what U.Va. has to offer across the board.”

His love of football and the camaraderie of being on the team led him to join the Cavalier football team as a walk-on. He landed a spot as the backup long-snapper – the player who snaps the ball to the punter or to the holder for place kicks – behind Matt Fortin, who Blaze described as one of the best in the country at the position, and now one of Blaze’s best friends. Blaze has yet to see any playing time in a game, but hopes to get on the field in the fall, he said.

His lack of playing time has taught him to lead “in a very different way,” he said. “It’s almost easy to lead in high school when you’re a standout player. People respect you and listen to you because you’re getting the job done on the field.”

In contrast, on the U.Va. team, he’s “at the bottom of the food chain,” he said. After three years of spending roughly 40 hours a week in fall semesters and 20 hours a week in spring semesters on football, always striving in practice to demonstrate “high energy and the best work ethic possible,” he’s finally seeing some fruits of his efforts, he said. “I’m proud to say that some of the young guys now look up to me. I can say a couple words at the end of practices, and have it be meaningful to the rest of the team.”

Blaze participated in a couple of “incredibly geeky” middle school programs, Future Problem Solving and Destination Imagination. The former required participants to identify a major problem, like global warming, and imagine the solution, assuming infinite resources and no limits.

From those programs, he learned “there are no limits to what you can do,” and a “can-do problem-solving” attitude – a mindset, he said, that remains “integral to my thought process today and some of my strengths as a student.”

For instance, Blaze is a leader of the all-male One in Four group that provides peer education around Grounds about dealing with and preventing sexual assault. Under his leadership, the group made about 25 presentations during the fall semester – roughly two per week – reaching nearly 400 students, a new one-semester record for the organization. Blaze hopes to present to every single U.Va. athletics team, something that has not yet happened because of logistical challenges, he said.

Jefferson Scholars join a special summer travel program during the summer between their second and third years. Blaze chose to join a trip to China last summer, where he spent 3 ½ weeks, followed by two weeks of travel on his own in Thailand and Vietnam. “I try not to speak in clichés, but it was an eye-opening experience,” he said.

Meeting college students in Chengdu and Beijing, he said, made him more conscious of his own worldview, and made him realize that a Western mindset is “not the be-all, end-all.”

That was not the only big thing that happened while he was in Asia.

Toward the start of the China trip, the group met with U.Va. President Teresa A. Sullivan one evening in Beijing. Days later, she resigned in an episode that quickly became national news.

“At the time, I think everyone in our group was ashamed of what happened, because it looked like it was a back-door dealing,” Blaze said. “But the way that everything was handled afterward spoke to the integrity of the Board of Visitors, the faculty and staff here, and the president, being willing to return to her position.

“Not knowing what led to the original decision, I can’t judge that. I can only be proud that things have since rectified themselves.”

Blaze will join the board officiallyin June, and said he has “a lot to learn” between now and then.

“As a non-voting member, I can’t really come in with an agenda,” he said. “As a 21-year-old, who has just spent 5½ semesters here, how can I know what really needs to be accomplished? Instead, I just hope that I can represent student opinion as faithfully as possible, and be an effective resource for the rest of the board, who have been around the block a few times.”

He does hope to be a conduit between the board and students, and to convey the board’s useful functions to the students, he said.

Blaze is seeking to do a distinguished major in economics, which will involve writing a thesis. His favorite part of economics is where public policy and economics interact, “and that’s where the math comes in, because the numbers make it real,” he said. He could see himself working in that realm, he said.

After graduation, he plans to continue in academia, probably in law or business school, he said.

“Right now, the picture 60 years from now is in better focus than five years from now,” he said. “I want to teach math when I retire.”

In Memoriam: Life of Drama Professor To Be Honored Sunday END_OF_DOCUMENT_TOKEN_TO_BE_REPLACED