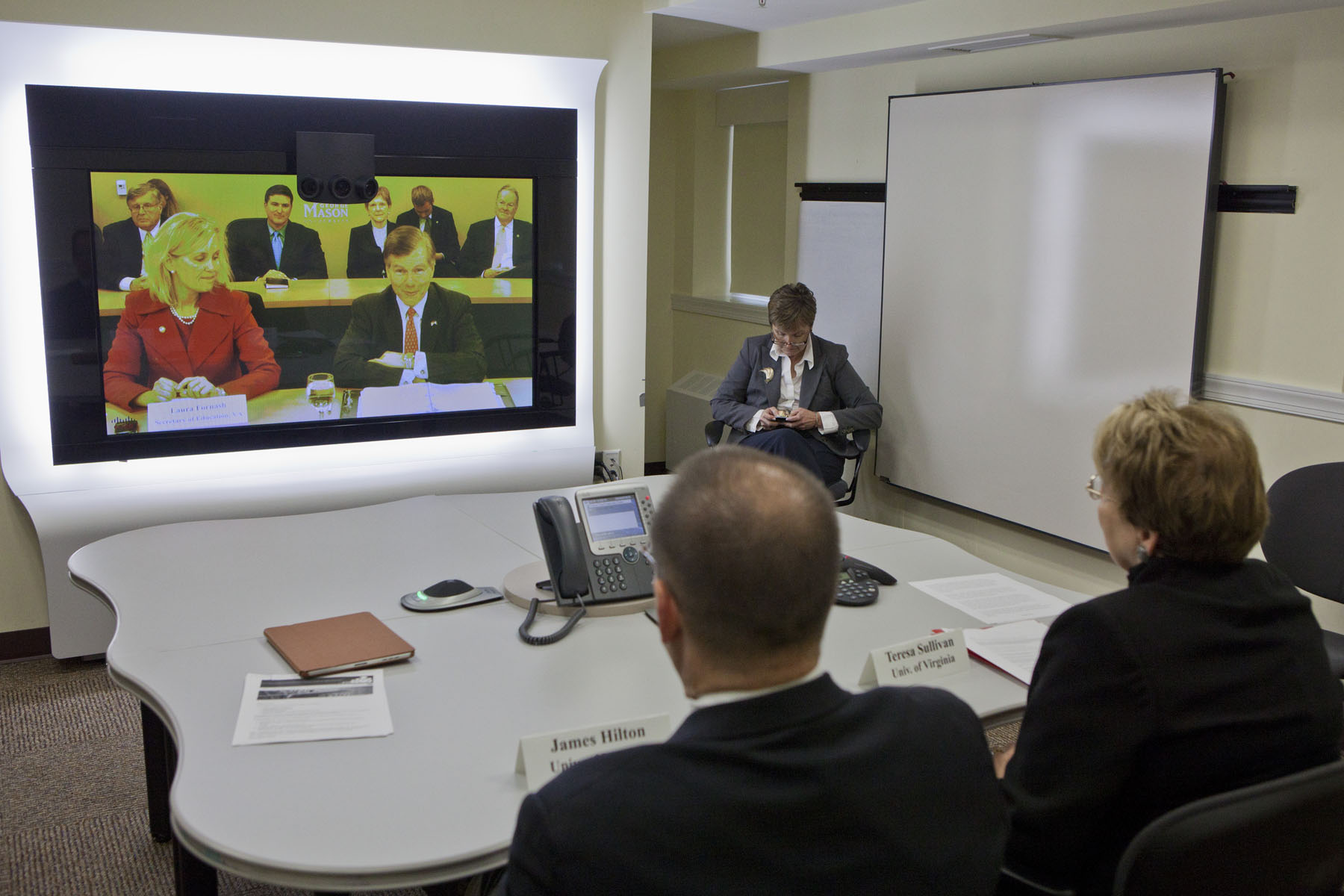 November 4, 2011 — Thursday afternoon, University of Virginia President Teresa A. Sullivan strolled across Grounds to take part in a meeting with her counterparts at three other Virginia universities, Virginia Gov. Robert F. McDonnell and John T. Chambers, chairman and CEO of Cisco Systems, the global technology company.

None of them made it to U.Va.'s Grounds, yet the meeting went off without a hitch.

The leaders all "gathered" via Cisco TelePresence, a sophisticated video teleconferencing technology that several of the participants, speaking from their own campuses, predicted would revolutionize the delivery of higher education. As a first step, the four institutions – U.Va., George Mason University, James Madison University and Virginia Tech –organized a consortium, called "4-VA," that will spearhead use of the technology to share instructional and academic resources.

It was a toss-up to determine which was most significant, the medium or the message. But understanding the message first requires a sense of the medium.

Deep in the stacks of the Charles L. Brown Science & Engineering Library in Clark Hall is a small room. On one wall is a large screen; above it is a triple-barreled camera, pointed at a table that faces the screen. The table is equipped with a phone communications unit.

Participants merely walk into the room, take a seat at the table, dial a number and connect to a similar room at JMU, Mason, Virginia Tech – or any other room that has a TelePresence set-up. Whoever speaks instantly appears on the screen, and the high-definition, real-time quality of the audio and video creates an "immersive" environment – the feeling that you're in the same room with the other participants.

U.Va.'s first TelePresence room came online in mid-summer, and thus far has been used mostly for meetings among the 4-VA partners and by students interviewing for jobs with companies that have TelePresence technology. But that's just the tip of the iceberg, Chambers, McDonnell and the 4-VA presidents said Thursday.

This spring, students at JMU and Virginia Tech will use TelePresence to participate in an advanced Chinese class offered at Mason. By 2013, the 4-VA partners will use the technology to deliver a degree-completion program in "Technology Innovation and Entrepreneurship" aimed at community college graduates. U.Va. is particularly eager to use the technology to collaborate on bringing to Grounds a "virtual math emporium," developed by Virginia Tech, that builds a "math infrastructure" for all students.

"This 4-VA initiative is exactly the kind of thing the General Assembly approved last year," McDonnell said, noting that he plans to include incentives for such collaboration in the state's future funding model for higher education. The initiative also addresses a goal outlined by his Jobs Commission, to expand access for all Virginians to programs that prepare them for careers in the global economy.

"I view the original four universities as a big pilot project, to prove that it can be done," Sullivan said. "What I hope is then to be able to turn it outward" – not only to other colleges and universities, but also to community colleges, high schools and even senior centers.

James Hilton, U.Va.'s vice president and chief information officer, added that Information Technology Services is working on ways to link the TelePresence technology to other forms of videoconferencing, to expand its use.

The universities also see possibilities beyond the delivery of instruction. Sullivan pointed out TelePresence's utility in encouraging research partnerships across institutions, not only by researchers in the same fields but "also as a problem-solving tool": A physicist at Mason who has trouble with a super-computing code, for example, might use TelePresence to take advantage of U.Va.'s expertise in the subject without having to make a trip to Charlottesville.

It also has the potential to greatly improve telemedicine interaction, she noted, allowing doctors at U.Va. to more closely examine patients from clinics that are hours way.

"This is transformative technology," JMU's Rose said. "This is the stuff of James Bond and Jason Bourne."

U.Va. is completing a second, larger TelePresence room in Clemons Library, which will have three screens, with the capability of monitoring three other locations simultaneously. The three-screen rooms at U.Va. and the other 4-VA schools will be designed and furnished to Cisco specifications to make it appear as if participants are in the same room.

"It's going to be much more useful, and also much more impressive," Hilton said.

Speaking with reporters after the meeting, Sullivan said she was not concerned that the new technology would undermine the uniqueness of each university. However, it should make them more efficient, by lessening the duplication of resources. For example, Virginia Tech need not launch a program in Sanskrit – important for those studying Greek and other classics languages – if U.Va. offers its course via TelePresence,  she said.

Clearly, though, the new technology will lower the walls between institutions.