For NICU Parents, Skype Provides the ‘Next Best Thing’ 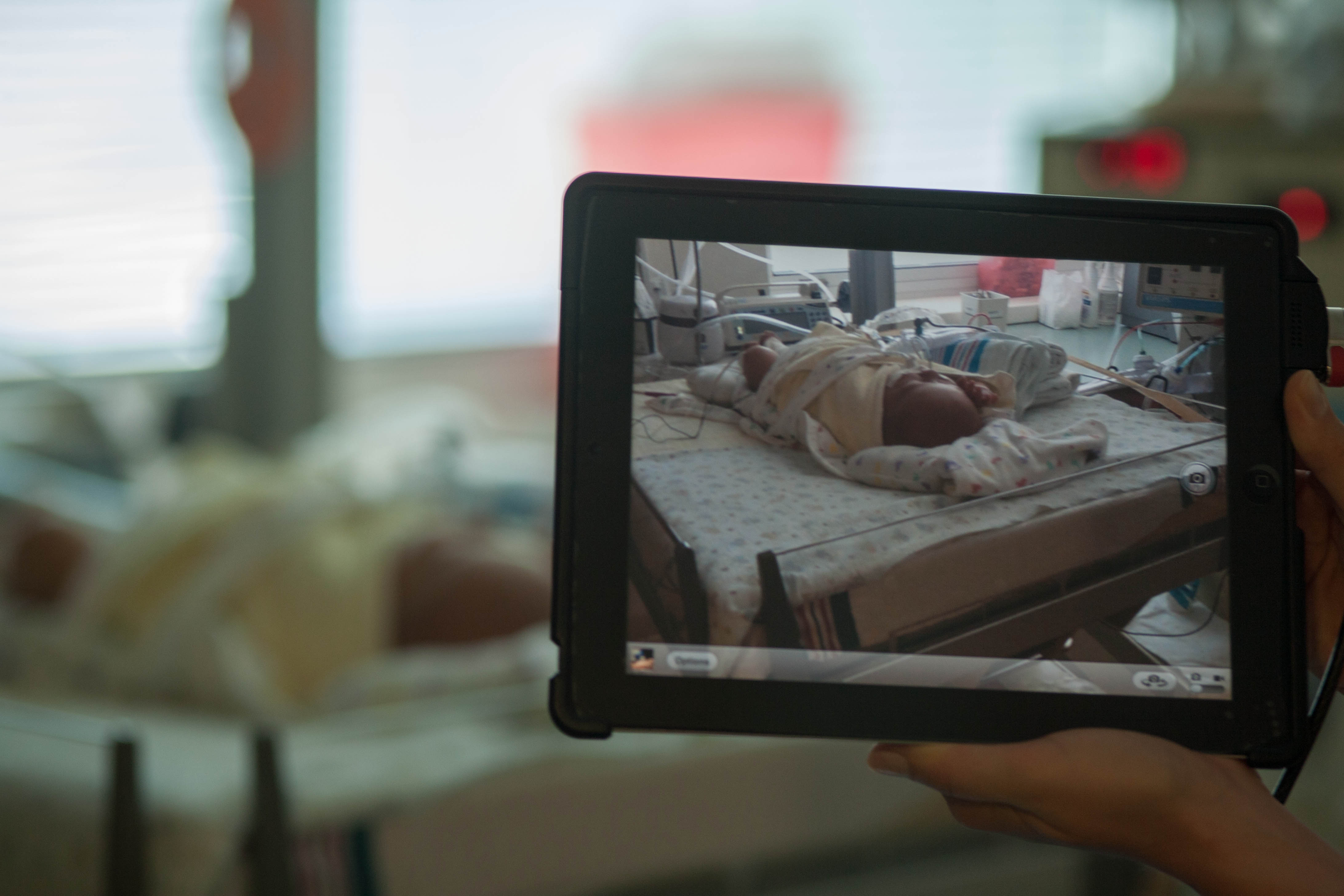 When Greg Callahan’s son, Alex, was born prematurely at 29 weeks, the 3-pound infant stretched from his father’s palm to just past his wrist. Greg and his wife KaDe, who live in Bedford – about 100 miles west of Richmond, just southwest of Lynchburg – spent six months in the neonatal intensive care unit at the University of Virginia Medical Center with Alex, who endured a series of intestinal surgeries, tracheal and stomach tubes and, after he developed pneumonia, a ventilator.

“The strongest emotion you feel is complete helplessness,” KaDe said. “There’s this little life, and it didn’t go the way you’d planned, and you’re completely exhausted – even though you’re sitting for 12 hours a day – and there’s not a thing you can do but pray.”

It was a wrenching ordeal. KaDe, a teacher, remained with Alex at U.Va., but Greg had to return to work, visiting Charlottesville only on weekends. So when the Callahans heard about U.Va. nursing professor Beth Epstein’s pilot project that uses Skype to keep parents in touch even when they are away from the hospital, their answer was unequivocal.

Epstein, a long-time NICU nurse herself who teaches ethics and studies trust and communication, said that while the NICU environment attempts to be family-friendly, it is inevitably a restless, surreal place of bleating monitors, plastic tubes and constant harried footsteps and hushed voices. There are few opportunities for sleeping over, the chairs are uncomfortable, and parents – who often position themselves next to the incubators’ portholes for the best view of their tiny infants – feel constantly in the way in an environment as foreign as the moon.

“It takes a significant amount of trust to get through a stay in the NICU,” Epstein said. “You’re seeing your baby for the first time, and they’re beautiful and perfect and full of hope, but the very sick ones have tubes going in and coming out, they’re surrounded by machines, IV poles, and they’ve sometimes been through very painful procedures. It’s a hard, bitter pill for a parent. And there is a lot of despair” – particularly when the parents can’t be there.

Epstein’s pilot takes aim at that despair. Using an iPad set atop a tripod, hospital caretakers introduce themselves to absent families, who can ask questions, make observations and see their baby in blessed close-up – the next best thing to being there.

“When you have an extended stay in the NICU, it gets harder and harder to be apart, and to be able to see one another on Skype, be able to talk – it made such a huge difference in our NICU experience,” KaDe said. “It was so emotionally helpful for us as a family, and it gave Alex a chance to get used to our family noise, what we all sound like at home.”

Other hospitals employ webcams in the NICU into which parents can tap, but those often get knocked about, provide awkward views of the babies and stir concern in parents who can’t quickly communicate with those caring for their babies. Epstein’s pilot – a calmer, more organized approach – offers parents a predictable time and method to see their baby’s nurse and doctors, ask questions and see their baby. All in real time.

Of course, there are kinks to be ironed out – among them picture quality images, Internet speed and storage of the devices in the NICU.

Getting staff used to the additional equipment is taking some time, said Epstein, who hopes to expand the program beyond its current two iPads and tripods, but she believes the project will benefit NICU providers, as well as parents and babies.

“Increasing parents’ trust and sense of involvement in their baby’s care will ultimately benefit not just babies and their parents, but NICU providers as well,” Epstein said. “A number of nurses are really championing this technology, and I believe this small-but-important program will earn others’ warmth too.”

“You know the kids’ game ‘Operator,’ where somebody tells somebody something and then the meaning is lost?” Greg asked. “That’s how it can feel sometimes. It was great being able to put eyes on Alex before the weekend, hearing from the nurses firsthand.”

“It was important for Greg to feel a part of Alex’s medical team, by being able to talk to doctors and nurses face-to-face at night,” KaDe added. “It made him a real part in their minds, and made him feel emotionally like he was not stuck at home. He didn’t have to just get my version of what’d happened, but got a first-person account. We have to believe in our hearts that it made a difference for Alex to get to hear his daddy’s voice each day. I know it made a difference for his daddy.”

“For six months, it let my family look at one another while we talked,” Greg said. “They should have these for every patient, at every isolette. It’s not the same as being there, but it’s the next best thing.”

What’s Next for UVA’s Class of 2022? END_OF_DOCUMENT_TOKEN_TO_BE_REPLACED