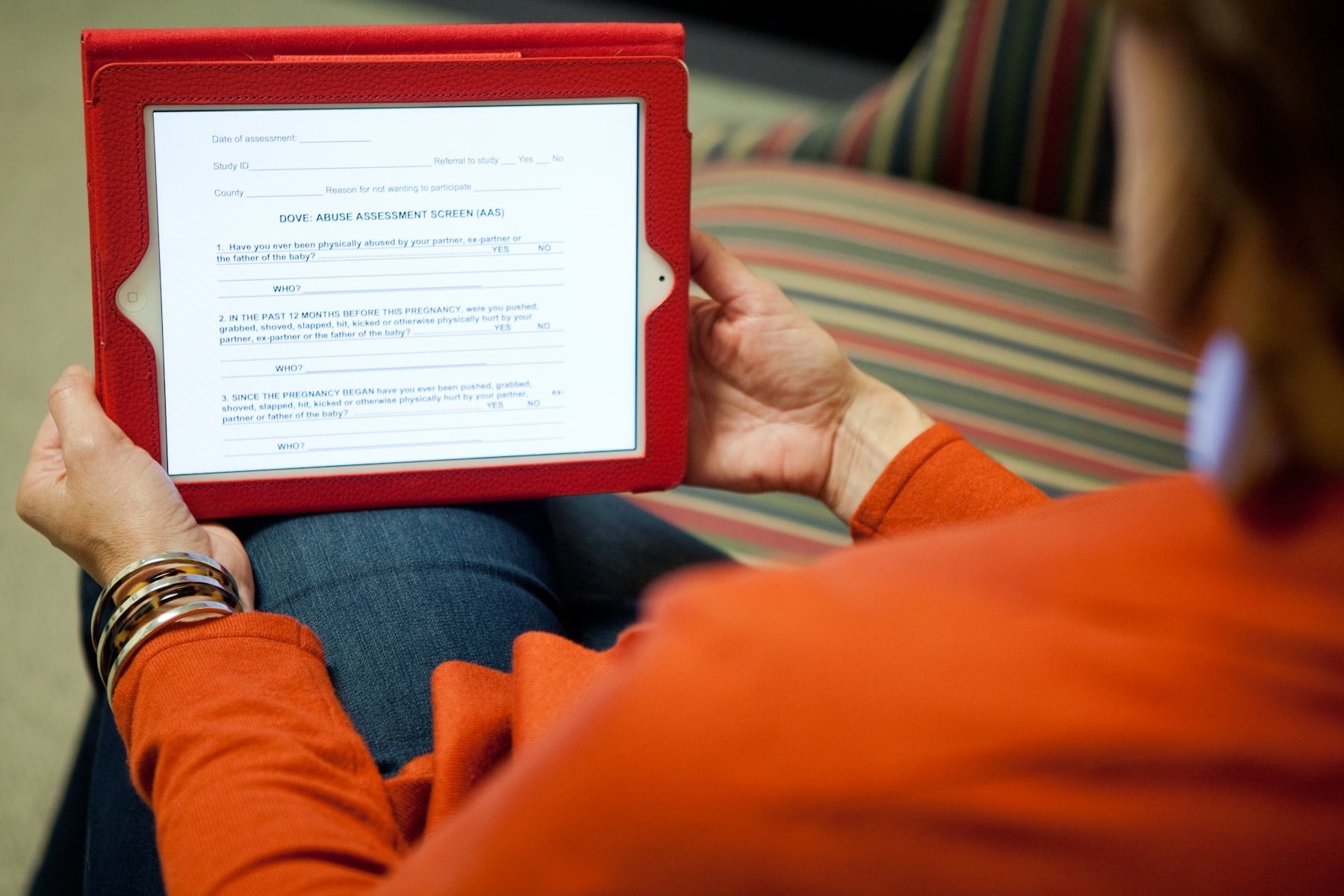 April 18, 2012 — Are pregnant women more likely to admit they're victims of domestic violence to a computer than a querying human? And if they are, could a tablet computer be a better route to encourage abused women to get help in a safer, more expeditious manner?

Those are the questions being asked, among others, in a new $4 million government-funded research venture that partners the nursing schools at the University of Virginia and Johns Hopkins University. The five-year study, funded by the Eunice Kennedy Shriver National Institute of Child Health and Human Development, one of the National Institutes of Health, will be overseen by two top domestic violence experts, nursing professors Linda Bullock and Phyllis W. Sharps.

The study's biggest aim, Bullock and Sharps said, is to identify pregnant abused women and help them move toward a better, sounder, safer future – for themselves and their children. Research has long shown that women who suffer abuse prior to pregnancy are likelier to be abused during pregnancy, and those abused during pregnancy have a higher risk of abuse in the early weeks after the baby is born.

"If you don't address the violence, you're not going to have positive pregnancy outcomes for babies and their moms," said Bullock, the Jeanette Lancaster Alumni Professor in the School of Nursing. "You're leaving the elephant in the room."

Part of the issue, she said, is that those doing the asking – who are part of state and federal programs that offer women at high risk for poor pregnancy outcomes access to at-home health care visits – have widely varied skills. Abused women may not feel comfortable enough to confess their situation.

The discomfort goes the other way, too.

A previous study led by Bullock and Sharps, a nursing professor at Johns Hopkins University, found that often "the nurses themselves feel uncomfortable about asking about the abuse, and that fact may be the barrier between a woman getting help and considering leaving their abuser – or not."

"What we find is that when we're using real, live home visitors, they're very uncomfortable asking about abuse," Bullock said. "There is a huge variety of educational levels among these folks. And many have been abused themselves."

The abuser is often present during these home visits and monitoring what is said.

Of the 4,000 women to be assessed in Baltimore and rural areas of Virginia and Missouri, half will be screened for abuse by the current method – being asked orally, by a visiting nurse. The other half will be handed a mobile tablet (akin to an iPad or an Android hand-held computer) and earbuds by the visiting nurse, and then guided through a series of on-screen questions and prompts about intimate partner violence. Should the abuser enter the room, a "safety button" prompts a cloaking video.

Though it remains to be proven, Sharps and Bullock hypothesize that using mobile tablets will increase the number of women who identify themselves as victims of domestic abuse by as much as a third.

And once they're identified, women who are victims can be given appropriate interventions that range from the straightforward – having extra sets of house and car keys, a packed bag with several days' supplies of clothes and toiletries, having a "safety plan" to exit the residence quickly – to the more complex: protective order information, shelter locations and creating a repository for important paperwork, like Social Security cards and marriage and birth certificates.

The study will enable researchers like Bullock and Sharps to determine whether the millions of dollars already being pumped into the states for visiting nurse programs are being put to the best use possible. With the passage of the Affordable Health Care Act, nearly $1.5 billion has been set aside for home visits and prenatal care to address the needs of the nation's most vulnerable, impoverished women.

Mobile health, using technology for assessment and intervention, will add another dimension to the researchers' work.

Should Alcohol Have Warning Labels About Cancer Risk? Most Americans Say ‘Yes’ END_OF_DOCUMENT_TOKEN_TO_BE_REPLACED