No. 1 Cavaliers Reach Another Milestone 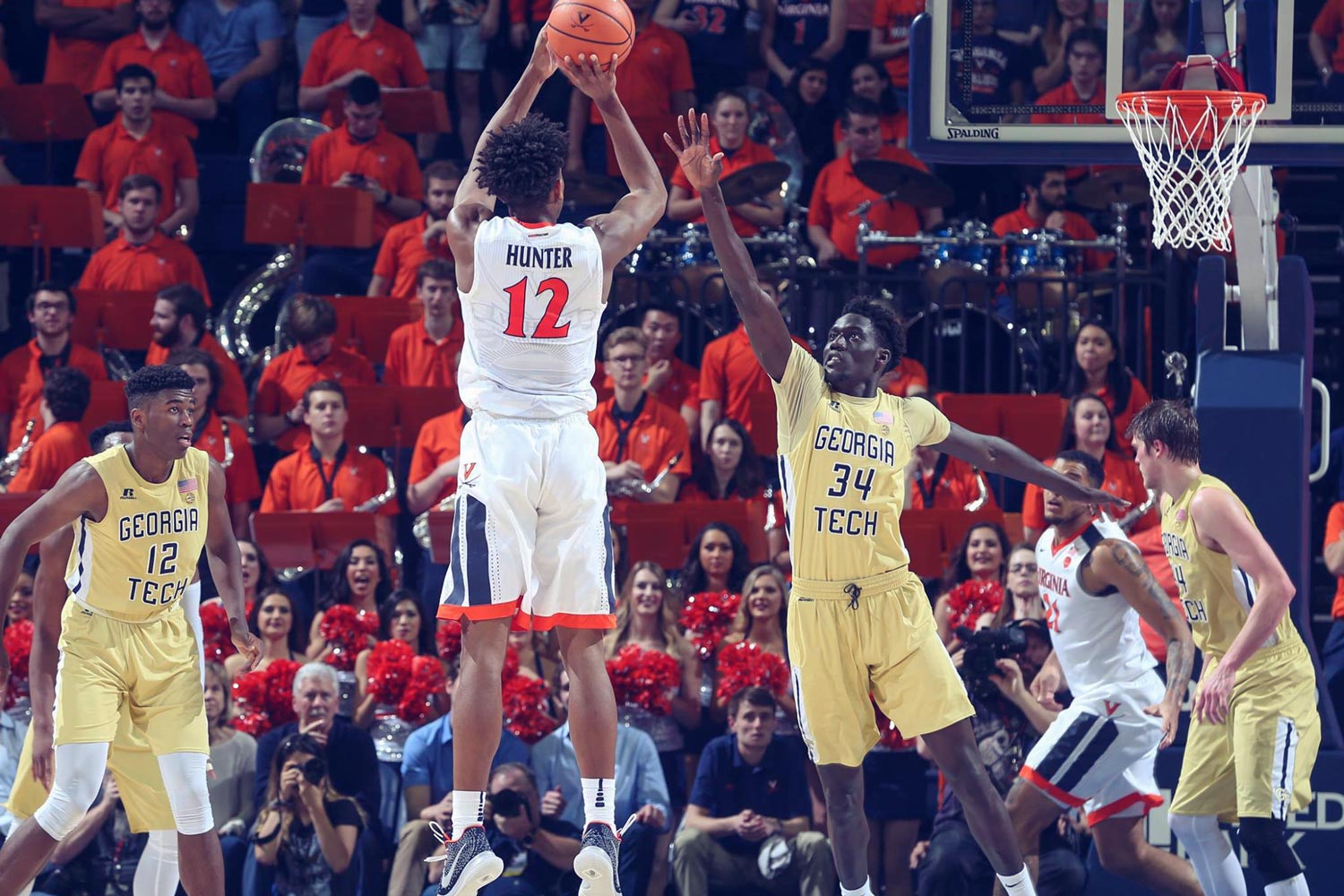 When it arrives in Brooklyn, New York, for the ACC tournament early next month, the University of Virginia men’s basketball team will do so as the No. 1 seed.

That became official Tuesday night, when the top-ranked Cavaliers defeated Georgia Tech 65-54 at John Paul Jones Arena to clinch at least a share of the ACC’s regular-season season crown.

“It’s definitely a good step in the right direction for what we want to do this year,” sophomore point guard Ty Jerome said. “We just can’t get complacent because we have so much more to go — hopefully at least 10, 11, 12 more games.”

For the Wahoos (25-2 overall, 14-1 ACC), a victory in one of the three games they’ll play before leaving for Brooklyn — or a loss by Duke (23-5, 11-4) — would assure them of their third outright regular-season crown in five years.

UVA owns the tiebreaker with the Blue Devils, having defeated them Jan. 27 at Cameron Indoor Stadium. In Brooklyn, Virginia’s first game will be the noon quarterfinal March 8 at Barclays Center.

What the ‘Hoos, who came into the season unranked, have accomplished is not “lost on me or all the players that I’ve been blessed to coach,” Bennett said. “This group, I told them, ‘You're trying to do something special, and it’s not going to be handed to you.’”

For the Cavaliers, this was their first home game as the top-ranked team in The Associated Press poll since Dec. 4, 1982. In Atlanta last month, Virginia led Georgia Tech by nine at the half and pulled away for a 64-48 victory.

The rematch proved more challenging for UVA, even though injuries have left the Yellow Jackets (11-17, 4-11) short-handed.

“Credit to Georgia Tech, how physical they were and how they came out,” Bennett said. “They ran their stuff hard, and we were not great tonight ... We had to kind of earn it and outlast them, and then to get that [No. 1 seed] is good, real good for these guys.”

Hoos are No. 1!
With tonight's win, @UVAMensHoops locked up the top seed in @theACC tournament! #GoHoos #Wahoowa pic.twitter.com/pUhojMC4cm

Such shots have become Jerome’s trademark this season, but he suffered a thumb injury in practice a couple weeks ago, after which his shooting percentage plummeted. Jerome played with his thumb wrapped against Virginia Tech and Miami and was 1 for 12 from 3-point range in those games.

An extended break gave Jerome time to heal, and he practiced Tuesday without his thumb unencumbered. Against the Jackets, Jerome hit 4 of 6 shots from beyond the arc and finished with 18 points. He also had five turnovers and two steals.

Senior forward Isaiah Wilkins was 3 for 3 from the floor, and Jack Salt was 3 for 6. Redshirt freshman De'Andre Hunter, who splits his time between small forward and power forward, scored nine points off the bench.

Perhaps the most surprising contribution, though, came from Mamadi Diakite. The 6-9 redshirt sophomore made all four of his field-goal attempts and scored nine points.

Diakite and UVA’s other underclassmen can look forward to many more nights at JPJ. For the team’s seniors — Wilkins, Hall and reserve guard Nigel Johnson — this was their penultimate home game.

Johnson transferred to UVA from Rutgers last summer. Hall, however, has been in Bennett’s program for five years and Wilkins for four.

WHAT’S NEXT? The Cavaliers have three regular-season games remaining: one at home and two on the road. This stretch starts Saturday, when UVA visits Pittsburgh (8-21, 0-16), the ACC’s last-place team.

Last season, the ‘Hoos took two of three from Pitt. UVA lost in overtime to the Panthers in Pittsburgh and defeated them at JPJ and at the ACC tourney in Brooklyn.

A Year We Will Never Forget: 2019-20 in Review END_OF_DOCUMENT_TOKEN_TO_BE_REPLACED

‘What Will You Carry With You?’ Remarks From UVA President Jim Ryan END_OF_DOCUMENT_TOKEN_TO_BE_REPLACED