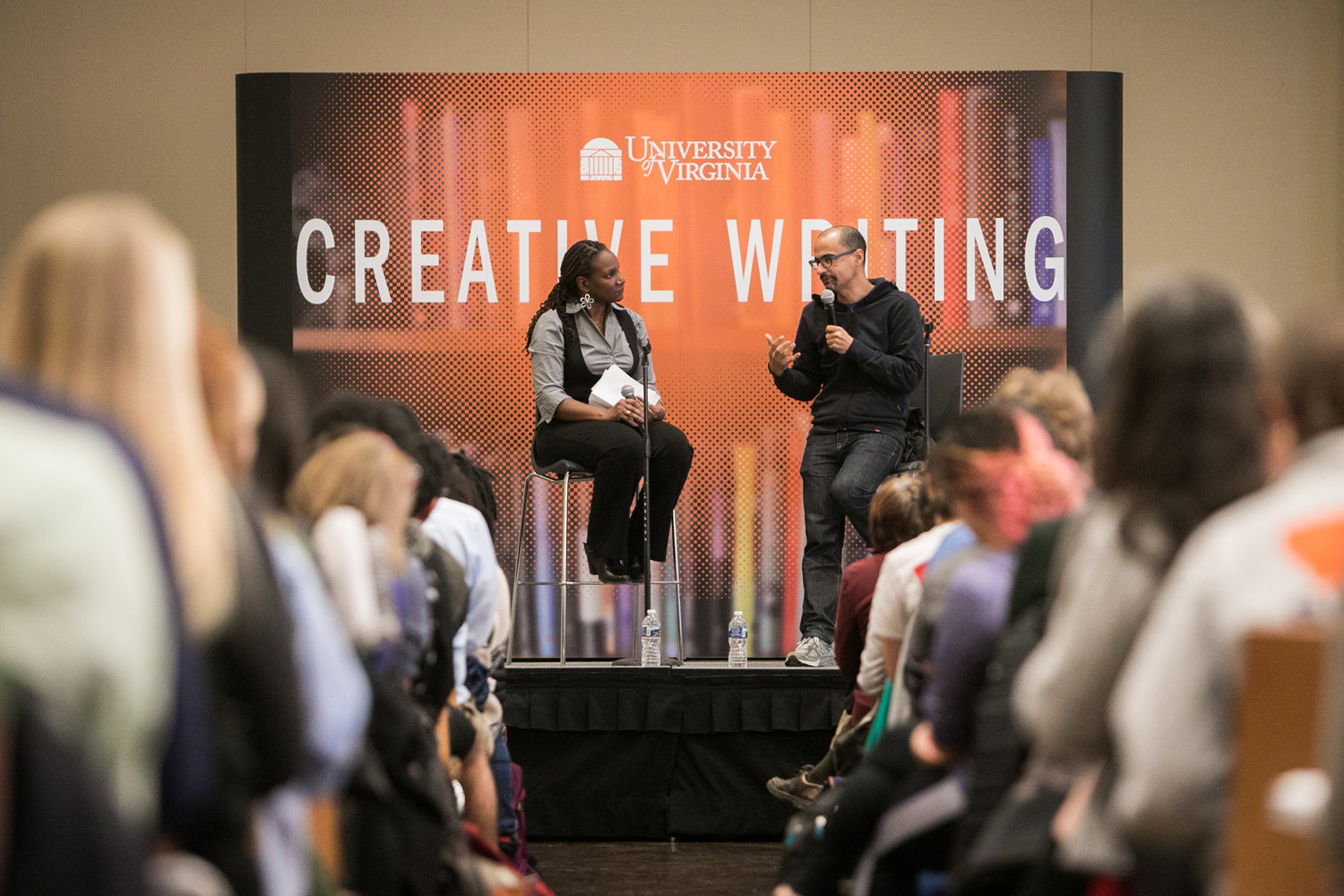 Assistant professor Njelle Hamilton, left, who interviewed Díaz during a Feb. 2 event, said, “I found him incredibly generous and genuine with both faculty colleagues and students.” (Photos by Tom Daly)

The University of Virginia’s Creative Writing Program concluded its series of three public events featuring Kapnick Distinguished Writer-in-Residence Junot Díaz with a Feb. 7 lecture by the Pulitzer Prize-winning novelist. As with the previous reading and the conversation with  English assistant professor Njelle Hamilton, it was standing room only in the Newcomb Hall Ballroom.

More than 500 people crowded the ballroom as Díaz delivered his lecture, “First You Must Rebel, or: How I Stopped Writing White and Got Free.” During his three-week stay on Grounds as the fourth Kapnick Distinguished Writer-in-Residence, Díaz also offered master classes to students in the Department of English’s Creative Writing Program and held office hours with students to field questions about their writing and his works.

Hamilton said she was extremely honored and thrilled to serve as Díaz’s interlocutor for a Feb. 2 public conversation titled “Writing Race, Futurity and Apocalypse in the Afro-Caribbean Diaspora.” 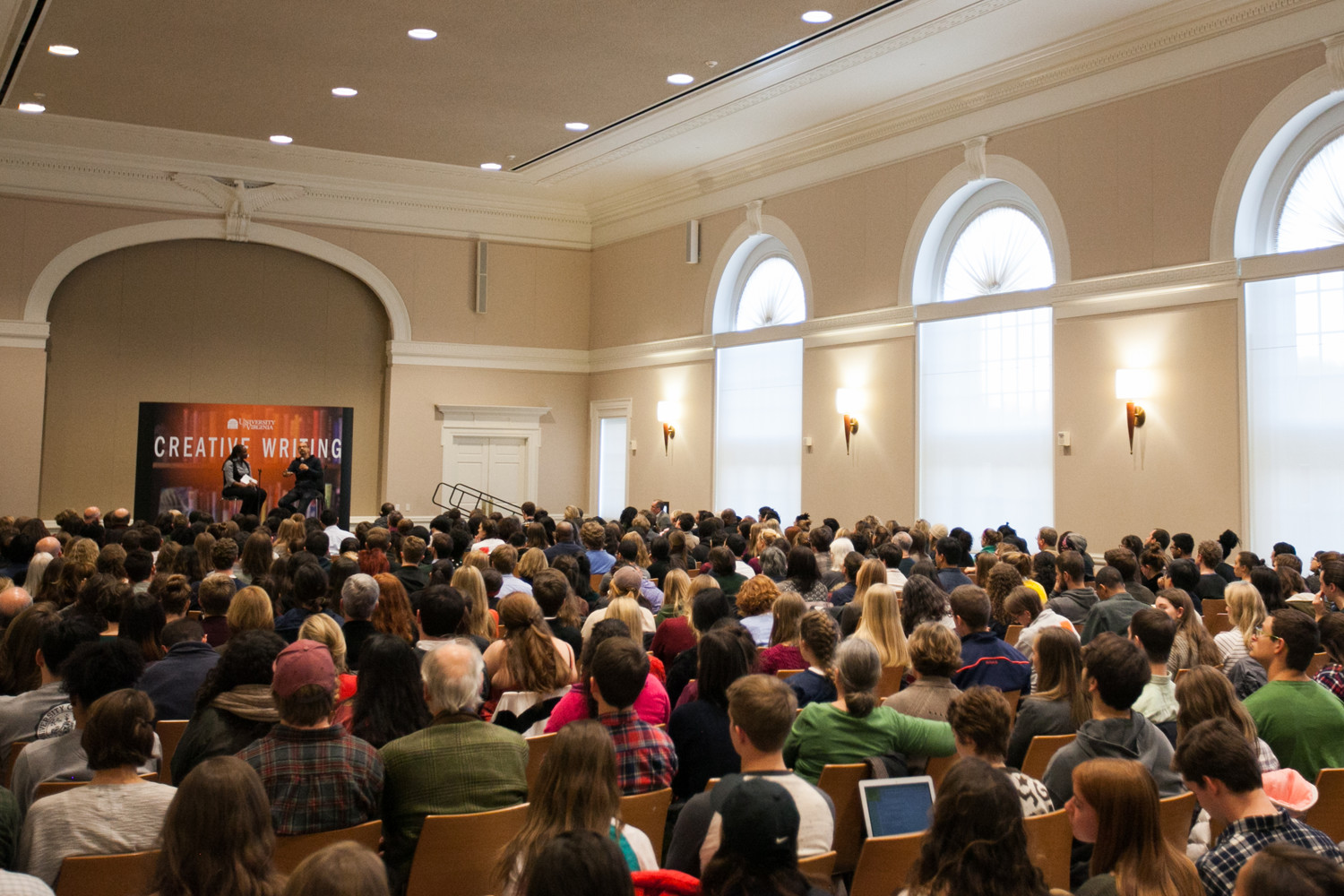 “I found him incredibly generous and genuine with both faculty colleagues and students,” she said. “I was impressed by how patiently and thoughtfully he listened to students and answered their questions, sharing his own journey as inspiration and warning for the aspiring creative writer and the young citizen alike. He was both personable and erudite, code-switching from profanity to profundity without skipping a beat.

“His lectures on writing while black and overcoming the ideological oppression of hegemonic whiteness were not just timely, but also revolutionary for many of the students (and faculty) of color in attendance, and brought many to tears; a common refrain after his last lecture was ‘Oh my God! You just told my life story!’”

In addition to earning the 2008 Pulitzer Prize, Díaz’s most celebrated work, “The Brief Wondrous Life of Oscar Wao,” won the National Book Critics Circle Award. Chronicling the life of an awkward, comic book-loving Dominican teen growing up in New Jersey, the multi-generational story has resonated with a diverse audience of readers enchanted by its use of “Spanglish” and its irreverent, but loving, tone.

Undergraduate student Martha Fulp-Eickstaedt, who met one-on-one with Díaz during his recently concluded residency, said that the novelist encouraged her and other UVA students to take joy in the art of writing, rather than become overwhelmed by ‘the myth of perfectibility.’

“He also told us that the best way to become a better writer is not to lock oneself in a room, but to soak up inspiration from lived experiences. He taught us that the key to creating rich characters is to focus on their relationships, and that when creating characters we should consider the people we know intimately, because the friends we don’t know too well often only present the prettiest façade, whereas the people we really know show their inevitable ugliness.”

Most of all, she added, he advised them, with the use of a choice expletive, to “chill the [blank] out.”

Jack Carlin, another undergraduate student who attended all three of Díaz’s public events in addition to meeting with him one-on-one, called Díaz “a rock star.”

“Talking to him one-on-one was an experience I’m not likely to forget. He was laid-back and unassuming, wanting to know more about me and my story than wanting to tell me his,” Carlin said. “Early on we discovered a mutual and profound love for film and spent a good deal of the short time we had together talking about our favorite movies, how they’ve influenced us, why they are important, etc. He’s extremely knowledgeable and, for lack of a better word, real, and I found talking to him as easy as speaking to a close friend.

“Eventually our conversation turned to what I would be doing after college, and when I expressed some apprehension about going into an industry that it may be difficult to get out of later he said, ‘Hey man, that’s like being worried about striking out before you even get to the batter’s box. You can’t think like that. If you wanna get a hit, if you wanna get on base, you gotta [blank] swing.’”