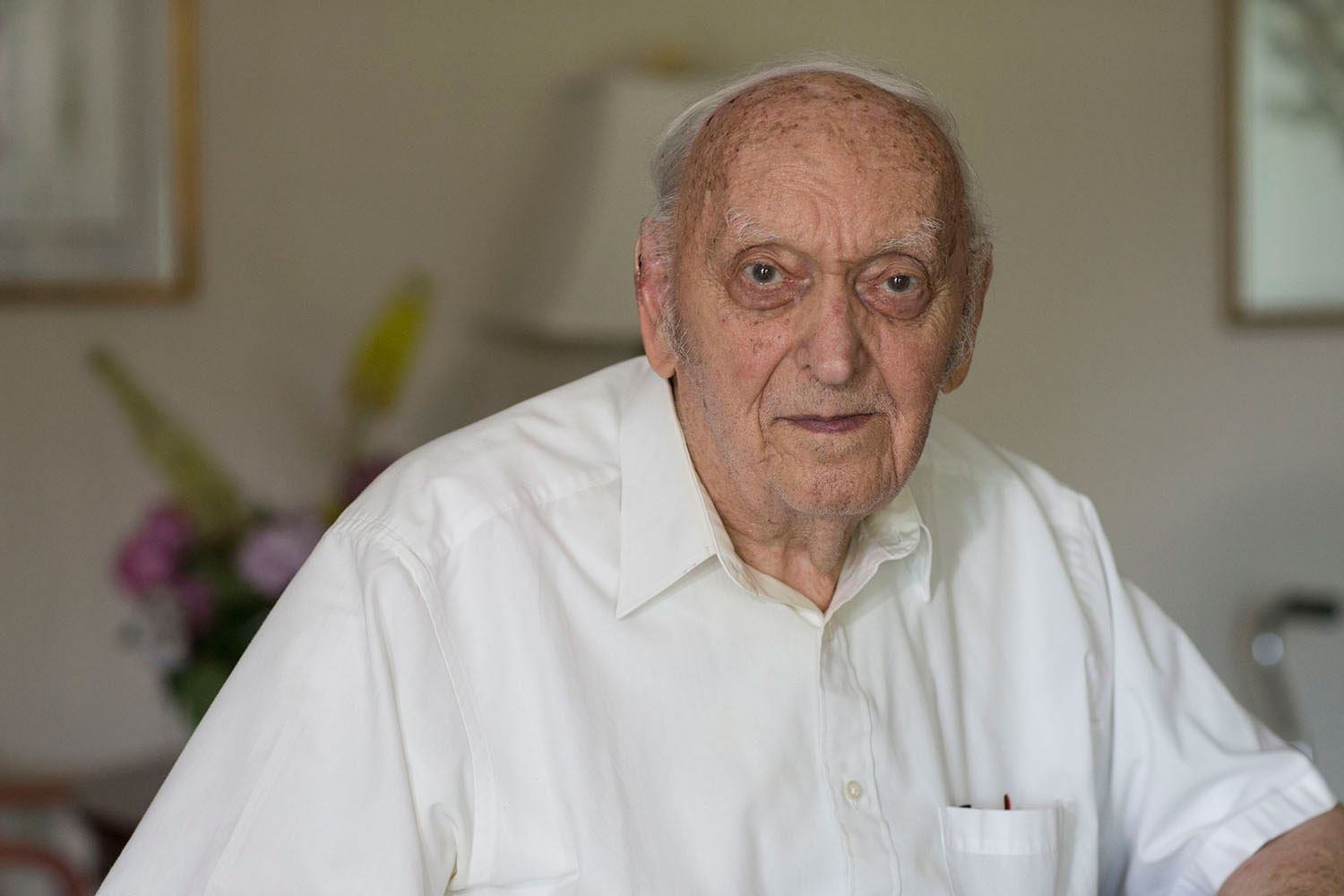 Paul Saunier, now 95, played a pivotal role in U.Va.&amp;rsquo;s civil rights history. In the 1960s and early &amp;rsquo;70s, he helped recruit and retain African-American students from around the state and provide them a more welcoming climate on Grounds.

In 1967, Ernest H. Ern began his tenure as the University of Virginia’s dean of admission. The geologist, instead of surveying rock formations, found himself studying the applicant pool for admission to Virginia’s flagship.

“I remember, in looking at the applicant pool that comprised the entering class of 1967, there were 12 applications submitted by black students,” Ern said. “Twelve.”

Of the 12, eight won admission. Six enrolled in the fall, Ern recalled.

Considering that the University in 1967 had 5,096 undergraduate students on Grounds, six black students in the entering class was a slim figure indeed.

But the numbers changed. The entering class of 1970 included more than 100 black students, Ern said.

Most of the students and professors at the University today have never heard of one man who helped integrate the school by aggressively recruiting black students. Paul Saunier, who celebrated his 95th birthday June 19, still lives in Charlottesville, in the Westminster-Canterbury retirement community. As an assistant to then-U.Va. President Edgar Shannon, and later as an administrator for the school’s equal opportunity programs, Saunier worked at the University from 1960 until his retirement in 1972.

Racial integration in the U.S. was not achieved easily. As the sociologist Orlando Patterson put it, integration was an “ordeal.” It was a process carried out on multiple fronts: in the military, in housing, in schools, and through friendship and marriage.

Charlottesville, like many other parts of the South, fought desegregation. In 1958, the town closed an elementary school and a high school to avoid admitting black students, as part of a state-mandated Virginia segregationist campaign known as “massive resistance.” After courts in Virginia declared massive resistance unconstitutional in early 1959, some white families started white-only private schools.

By the 1960s, U.Va. had in theory opened its doors to black students. But few applied. Virginia’s flagship – although formally desegregated since 1950, when Gregory Swanson, a 25-year-old African American from Danville, enrolled in the Law School – struck many African-American students as a hostile environment.

Roland Lynch came to the University in 1966. He was one of six black students in his class.

“Many of us, quite frankly, were very afraid,” he said.

He recalled the football games, where students would sing “I Wish I Was in Dixie” and wave Confederate flags. One Saturday morning, en route to a game, he and friends got into a fistfight with three white men who jumped them.

When Saunier arrived on Grounds, hired to advise Shannon on public relations issues, the Richmond native discerned that “the biggest PR problem was going to be civil rights.”

Working alongside faculty such as professor emeritus of history Paul Gaston and the now-deceased Renaissance literature scholar William Elwood; community leaders such as Billy Williams, the owner of the Anderson Brothers Bookstore; and administrators such as Shannon and Ern, Saunier sought to make the University more welcoming to African-American students.

In 1962, the Corner was almost entirely segregated. Restaurants refused to seat black students; movie theaters refused to sell them tickets; barbershops declined to cut their hair.

Saunier, accompanied by bookstore owner Williams, went to each Corner establishment to convince them to open their doors to African-Americans.

“The basic thing I used was: you may turn down a black in your restaurant thinking he’s a local black, but with all the international students we’ve got, he could be a prince. It would be all over the Washington Post and the New York Times,” Saunier said.

The tactic proved effective. All the restaurants on the Corner – with the exception of the White Spot – agreed to serve black patrons, two years before the Civil Rights Act of 1964 mandated integration. The next string of restaurants, on Cherry Avenue, stayed segregated until ordered by law.

Next, Saunier turned his attention to increasing the numbers of black students on Grounds. In the late 1960s, the University had no budget for recruiting black students, he recalled. Nor did the school have recruiting literature. It offered only a course catalogue. For many prospective black students, unsure what they would be getting into, the lack of information seemed to hint at a forbidding atmosphere.

Saunier enlisted current black students to write a pamphlet discussing their views on the University. He collected money from faculty members to print the somewhat “inflammatory” document, he said. The pamphlet gave high school seniors an honest account of the experiences black students had had in Charlottesville.

With Ern and others, Saunier devised a recruiting strategy. The administrators would approach guidance counselors at predominantly black high schools and convey the message that they were “really dead serious” about attracting more black students, Ern said. Ern said that Saunier’s involvement helped the University build relationships with predominantly black high schools: having an official from the president’s office speak with counselors pointed to the seriousness of the University’s commitment to meaningful integration.

Saunier and the other administrators worked closely with current black students throughout the process. Saunier and Elwood, the English professor, would lend their cars to black students to enable them to go on recruiting trips to predominantly black high schools.

Lynch was one of those students. With help from Saunier and others, Lynch and other black students in his class would drive around the state – “to Richmond and Tidewater and Northern Virginia” – and speak candidly about their experiences at U.Va.

Of the six black students in Lynch’s entering class, three entered the Engineering School. All three flunked out.

“If you could add our grade-point averages together, it would not have been a 4.0,” Lynch said. “We were afraid in many cases to approach faculty to let them know we didn’t know stuff. … We knew a lot of faculty didn’t want black students there.”

Attending all-black high schools had put them at an academic disadvantage. All three had ranked in the top five of their high school classes, Lynch said. But none of them had had the opportunity to take calculus, and their high schools offered them limited intellectual resources.

“All my textbooks were hand-me-downs from the white school in Newport,” Lynch recalled.

Although Lynch returned to U.Va. to complete a bachelor’s degree in mathematics, the other two students transferred to other schools.

“You can imagine the kind of backlash we got about how we weren’t qualified for U.Va.,” he said.

Lynch’s experiences led him to recognize that admission meant little if black students simply dropped out. He credited Saunier with helping to develop a support system for black students.

“Without his work, this whole thing would have fallen apart,” Lynch said. Saunier helped ensure “all the pieces fell into place … from the president’s office on down,” he said. For example, he helped black students get tutorial help.

A lot of these initiatives “were handled quietly off the books,” Lynch said.

Saunier also made a habit of hiring black students to be his “ambassadors into the student body,” he said. During Shannon’s tenure, the president’s office was in Pavilion VIII. Students “would beat a path” up to Saunier’s office on the second floor “and sit down and talk about issues,” Ern recalled.

Saunier said he considers his work increasing black enrollment to be his biggest contribution to the University. With regard to enrollment, he said, “The proof is in the pudding”: there were almost no black students when Saunier arrived, and by the time he left black students were a visible minority presence.

“Paul Saunier walked the walk on civil rights back when most people were just talk – and some of the talk was nasty,” said Larry Sabato, University Professor of Politics and director of U.Va.’s Center for Politics. “He worked closely with President Shannon to turn around a terrible situation. We had very few African-African students and faculty. Each prospective applicant had to be convinced that U.Va. had changed. Well, Paul was a dynamo, and you didn’t debate Paul unless you wanted to lose.”

Nonethless, Saunier’s moderate approach – his strategy of avoiding conflict, building relationships and working behind the scenes – drew ire from some other civil rights advocates.

“Paul Gaston was always criticizing me for going too slow, trying to work within the system,” Saunier said.

In some respects, however, Saunier’s method proved fitting for 1960s-era Charlottesville: By charming people of all kinds, he was able to work successfully for racial inclusion without alienating anyone. Saunier’s versatility – his ability to work with administrators, faculty, students and Charlottesville residents – marked a natural continuation of a career spent moving among a number of different communities.

After graduating from the University of Richmond, Saunier began work as a reporter for the Richmond Times-Dispatch. In 1942 he went to war, stationed mostly in Norfolk. In the postwar years readers were eager for “stories about individuals rather than mass killing,” Saunier said. So he traveled across the state, writing stories about the people he met.

“I was a newspaper man,” he said. “I did stories on turtle trappers, sheep shearers, oyster tongers. I went from one end of the state to the other.”

He jumped to politics shortly afterward and worked as a public relations adviser and campaign manager. As an assistant to a congressman, Saunier found himself tasked with introducing John F. Kennedy, then a senator, to an audience in Richmond. Kennedy, absorbed in reading letters, paid no attention to him on the plane ride over. When the two men arrived at the hotel in Richmond, the future president had an unusual request.

“He said, ‘Now I have to soak in the tub for my bad back, and I would appreciate it if we saved time by you sitting on the john while I soak in the tub, and brief me about what we’re going to do tonight,’” Saunier said.

So he perched on the toilet and briefed Kennedy. At dinner, the senator sat next to Saunier’s wife. “He paid no attention to her,” Saunier said. “He rewrote his speech on the basis of what I’d told him in the tub. So what I learned about John F. Kennedy is that he didn’t waste any time.”

Shannon hired Saunier soon after. The University was the last chapter of his career. He resigned from his post as an administrator of the equal opportunity program after the Board of Visitors approved a set of timetables for hiring black faculty and staff. Saunier felt the plan amounted to a quota system.

“I thought that we should continue to promote and hire by qualifications, not quotas,” he said, adding, “I thought of that sentence later. I’m sorry I didn’t use it when I quit.”

He said he thought that timetables plan was executed in bad faith, as a piece of “politics” that would ultimately hurt equal opportunity.

For Saunier, racial equality is – or ought to be – an apolitical principle.

Message from President Ryan Regarding Fatal Shooting on Grounds END_OF_DOCUMENT_TOKEN_TO_BE_REPLACED