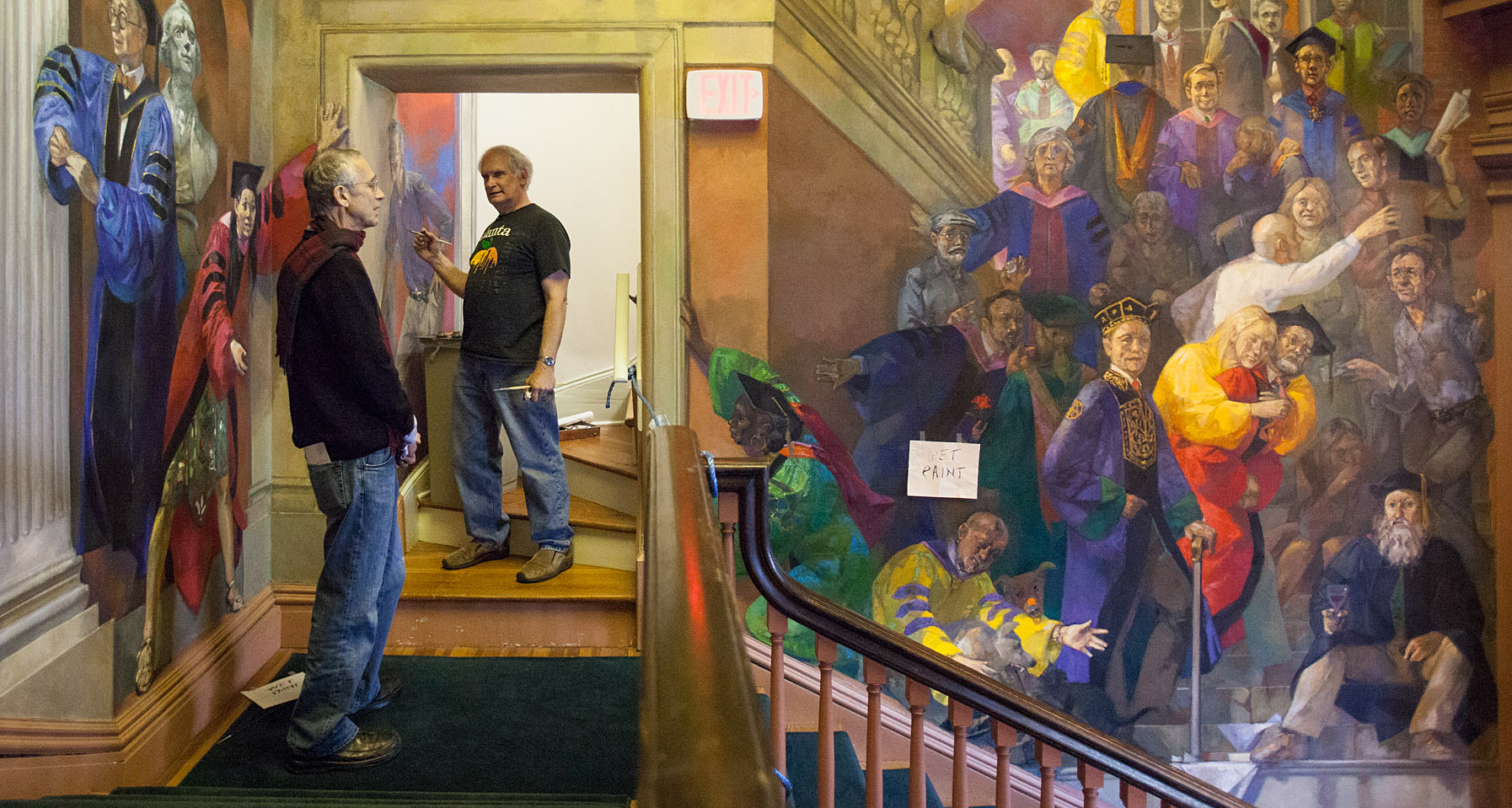 Over the past 16 years, artist Lincoln Perry has created a visual allegory representing education through the depiction of triumphs and setbacks, the cycle of generations and the relation between culture and nature. Perry began painting the mural, located in the lobby of the University of Virginia’s Old Cabell Hall and titled “The Student’s Progress,” in 1996.

He completed the first 11 panels in 2000. The narrative depicts a student, “Shannon,” as she enters the University, follows her through a journey of self-discovery in her pursuit of knowledge and concludes with her graduation.

“A great work of art is like a great education – it imparts its lessons both intellectually and experientially through a sense of place,” Elizabeth Hutton Turner, vice provost for the arts, said. “The mural is not a description; it’s an adventure. It is a fascinating journey for anyone who wants to take it.”

The journey Perry painted is not easy-going. He chose a woman because, he said, “I wanted someone who was not breezing through life, and it seems to me that women have more of an uphill battle than men. I wanted her to be having a hard time. Life is hard, and certainly school is hard.”

The young woman carries a violin throughout the panels, symbolizing her pursuit of creativity and culture. Progressing through the panels, Perry depicts her setbacks. “She twists her ankle and she drops her violin. The idea is that somehow or other she’s not waltzing down the Lawn in majesty. She’s fighting,” Perry said.

The 11 panels were painted on canvas in his studio in Maine and installed in the lobby of Old Cabell Hall, with Perry adding finishing touches.

But Perry realized the journey was not complete. In 2005, he continued the narrative on the side and north walls and the two staircases that lead off the lobby, depicting her post-graduate life. This time, he attached the canvas to the walls, then painted it. “Old Cabell Hall has basically been my studio for seven years,” Perry said.

“So it’s the same idea as the initial panels, but writ large. Now, instead of just graduating, she’s continuing this generational cycle and expanding the whole story out into the community and the world and nature.”

The young graduate comes back to U.Va. for graduate studies, marries and has a baby. Pregnant, Shannon stands on the edge of festivities watching Halloween on the Lawn and other activities, and on the far right, with her daughter peeking from behind her, she looks wistfully back at the Lawn.

Perry said the next few panels, in his mind, show her returning to the University as a professor; in one panel, she passes on her violin to her daughter, who is embarking on her own journey as a U.Va. student.

In stairwell panels, Perry fictively depicts culture and nature. In the east stairwell, faculty members are depicted on one side and students on the other. “These are young people, who are still forming, and faculty, who are obviously, presumably experienced,” Perry said. “They are both organized around a fairly private idea of the virtues and vices, so looking at them over time, people might start seeing or finding those references.”

The west stairwell offers a version of nature, showing non-threatening animals such as deer and turkeys and a more threatening mountain lion. Perry said he did not want to paint nature as “pretty,” so there are references that indicate that nature is not a simple concept. A sunset behind the mountains graces the west wall of the stairwell. It echoes Thomas Jefferson’s original intention for the Lawn to open to nature beyond the University.

Perry said Jefferson and the Lawn were an influence at all stages of the project. Jefferson designed the Lawn as a model for learning about architecture, with the different classical architectural details incorporated in each pavilion. “Mr. Jefferson’s idea is that you start at the Rotunda, which is the temple of learning: the Lawn, which is where the classrooms were; then he guides you out into nature, which you see as mountains in the distance.

“This mural expresses my desire to paint something that is coherent within the context of Jefferson's complex metaphor, which is still alive. His architectural examples on the Lawn were meant to be educational, and they are still there for us to learn from and enjoy.”

For Perry, Italian painters Paolo Veronese and Giovanni Battista Tiepolo are “the patron saints of this project, in terms of their having done architectural collaborations,” he said. Throughout the mural, Perry creates fictive architecture and also incorporates the architecture of Old Cabell Hall. Figures appear to step out the confines of the picture and engage the viewer. “If you cast a little shadow on actual surfaces, it starts to look potentially like that foot is sticking out. That was great fun,” he said.

At every stage, Perry engages the viewer. Because the murals are at eye level, he paid careful attention to detail. His choice of colors and shapes that coordinate harmonically and the use of a technique, called “optical mixing,” that layers several colors, allowing colors below to show through and scintillate, combined with the expansion of the flat walls by painting architectural elements and using the existing columns in the lobby space to create a frame or arcade, all combine to draw the viewer into the mural.

“You are creating an illusionary space partly by color weight and color choice. The optical mixing is the frosting on the cake,” Perry said.

The U.Va. Arts Council is sponsoring signage and a brochure explaining Perry’s techniques, themes and references and a guide to each panel.

To view a video about the making of the mural, visit Perry’s website.