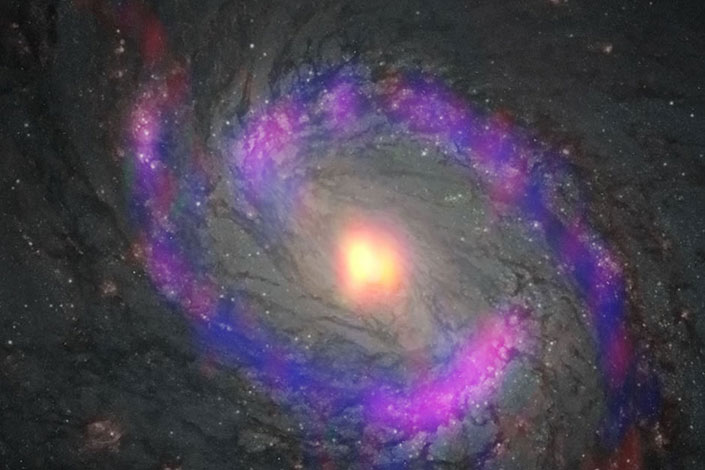 The central part of galaxy M77, as observed by ALMA and the Hubble Space Telescope.

Using the ALMA radio telescope in Chile, a University of Virginia astrochemist and his colleagues at two research institutions in Japan have discovered regions where organic molecules endure intense radiation near a supermassive black hole at the center of a spiral galaxy 47 million light-years from Earth.

Such complex carbon-based molecules were thought to be easily obliterated by the strong X-rays and ultraviolet photons that permeate the environment surrounding supermassive black holes. The new ALMA data indicate, however, that pockets of calm exist even in this tumultuous region, most likely due to dense areas of dust and gas that shield molecules from otherwise lethal radiation.

Interstellar gas contains a variety of molecules that differ wildly depending on the environment. For example, high-temperature, active star-forming regions produce different molecules than would be found in colder interstellar regions. This enables scientists to probe the temperature and density of certain regions by studying their chemical composition.

Astronomers have long been studying the molecular signatures around supermassive black holes – both nearby starburst regions and surrounding rings of dust and gas known as circumnuclear discs that spiral-in to feed an active black hole. These regions are important for understanding the evolution of galaxies. However, weak radio emission from the molecules there often makes observations difficult.

To better understand the complex and energetic environs around a supermassive black hole, the research team, including U.Va. astrochemist Eric Herbst, observed galaxy Messier 77, in the direction of the constellation Cetus. Herbst, who holds joint appointments in the chemistry, astronomy and physics departments, is a researcher with U.Va.’s Center for Chemistry of the Universe, which explores chemical reactions that occur under the extreme conditions of space.

M77 is known to have an actively feeding central black hole, which indicates it has a substantial circumnuclear disc. That disc, in turn, is surrounded by a 3,500-light-year-wide starburst ring. The new ALMA observations clearly reveal the distributions of nine types of molecules in the surrounding disc and starburst ring and that the distribution varies according to the type of molecule.

“ALMA has launched an entirely new era in astrochemistry,” Herbst said. “Detecting and tracing molecules throughout the cosmos enables us to learn so much more about otherwise hidden areas, like the regions surrounding the black hole in M77.”

The research team speculates that organic molecules remain intact in the circumnuclear disc due to the large amount of gas there, which acts as a barrier for the X-rays and ultraviolet photons, while organic molecules cannot survive the exposure to the strong ultraviolet photons in the starburst region where the gas density is comparatively lower.

The research was led by Shuro Takano at the National Astronomical Observatory of Japan and Taku Nakajima at Nagoya University. U.Va.’s research with ALMA is coordinated with the National Radio Astronomy Observatory, headquartered in Charlottesville.

How a Single Email Changed a Life END_OF_DOCUMENT_TOKEN_TO_BE_REPLACED

Fall Is in the Air on Grounds END_OF_DOCUMENT_TOKEN_TO_BE_REPLACED

At UVA, There Is a Club for Everyone END_OF_DOCUMENT_TOKEN_TO_BE_REPLACED