Out-Migration From Virginia Continues for a Fourth Consecutive Year 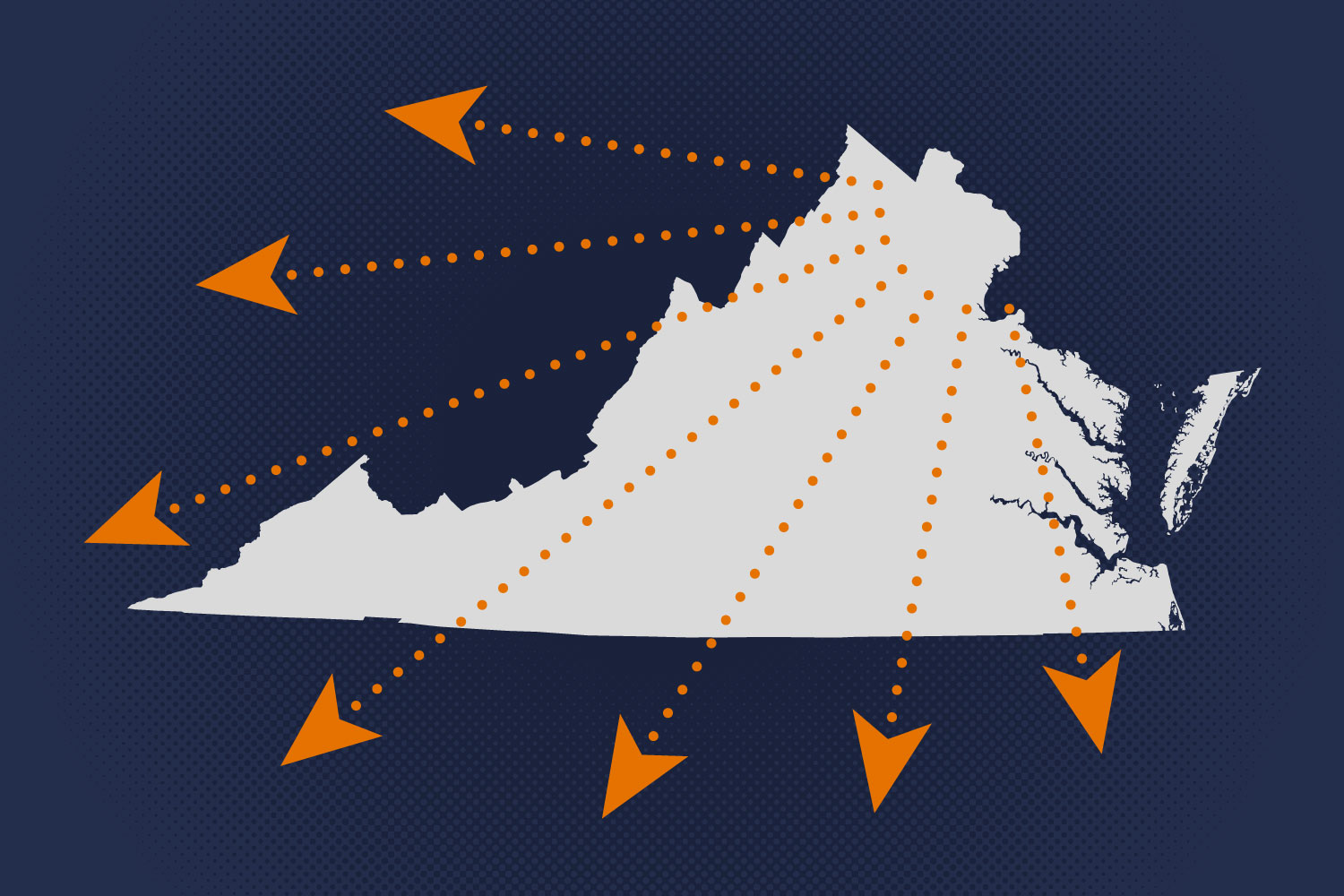 The following analysis first appeared in a Dec. 7 “Stat Chat” from the Demographics Research Group at the University of Virginia’s Weldon Cooper Center for Public Service.

Late last week, the IRS released its annual migration flows data, which showed that more people are moving out of Virginia than into it for the fourth year in a row.

Virginia’s recent shift into out-migration is notable because prior to 2013, the IRS had never recorded out-migration for Virginia since it first began publishing migration data in 1978. Though Virginia’s population is not declining, it is now dependent on having more births than deaths to continue growing. As a result, Virginia’s population growth has slowed from around 90,000 annually during the 2000s to close to 50,000 annually during the past four years. 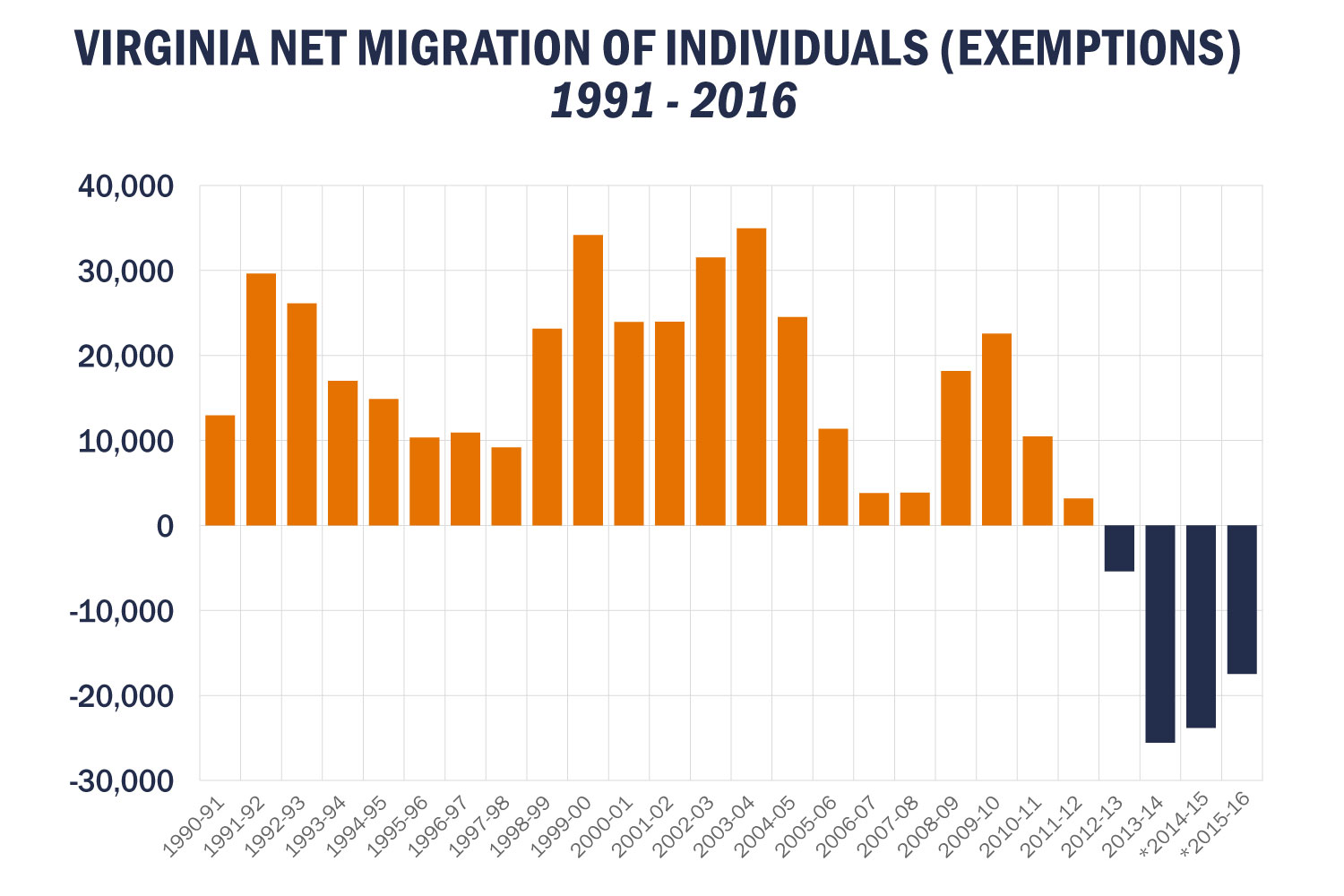 The federal budget sequestration, which started in 2013, is the most obvious reason for the recent out-migration from Virginia. Most residents moving out of Virginia have been from Northern Virginia, where there is a large number of federal employees and contractors, and to a lesser extent from Hampton Roads, where there is a significant Defense Department presence.

In 2010, before the federal spending cuts, eight of the 15 U.S. counties with the highest median household incomes were located in the Washington, D.C. metro area, but by 2016, only three D.C.-area counties remained in the top 15. 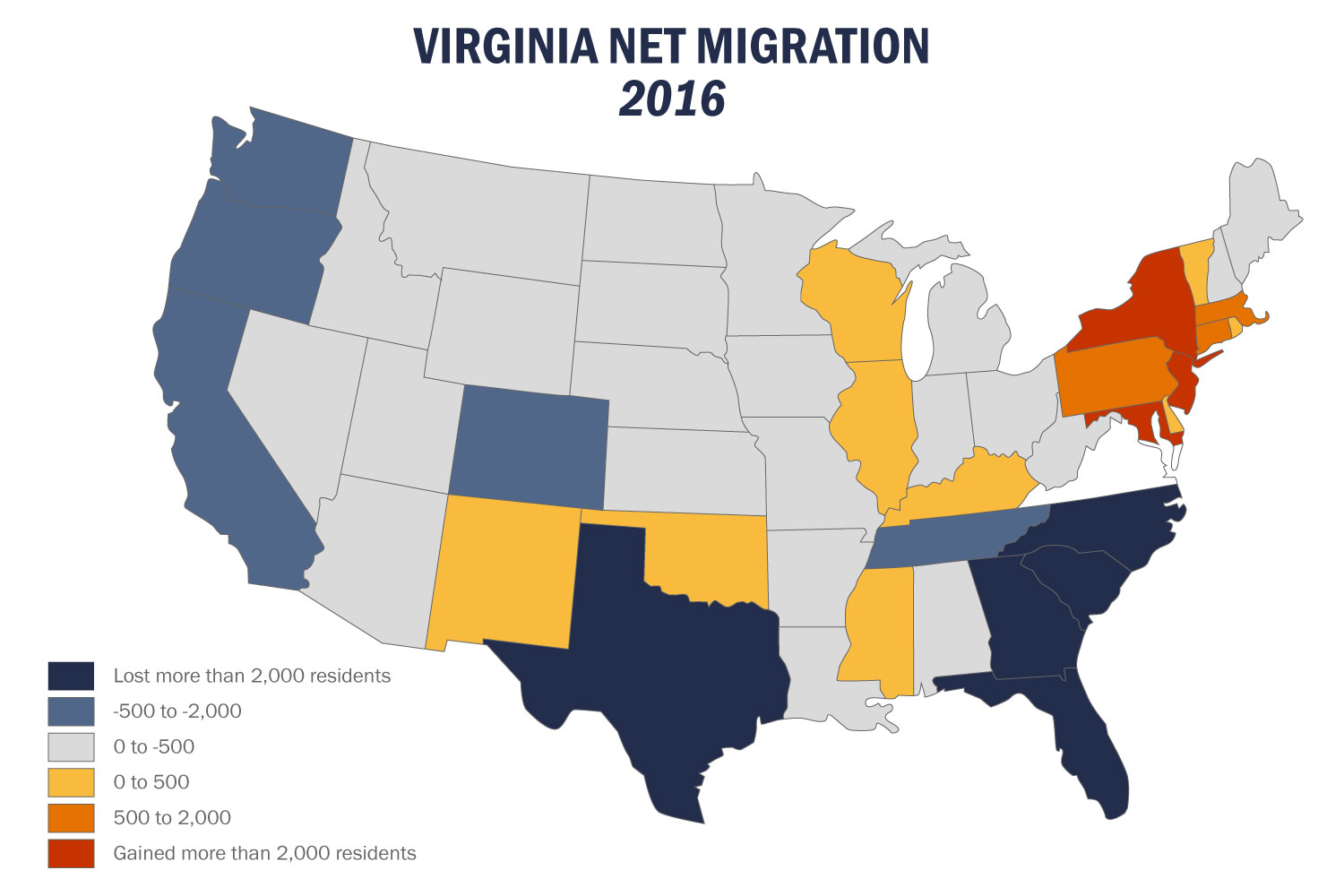 Most of the out-migration from Virginia has been southward and westward, particularly to metro areas with fast-growing economies, such as Houston and Raleigh, North Carolina. While many of those who have moved out of Virginia in recent years may have done so as a result of the federal budget sequestration and Virginia’s weakened economy, a closer examination of the IRS migration data indicates that Virginia residents may be leaving for other reasons as well.

Not only has migration from Virginia to metro areas with fast-growing economies risen, so has migration to popular retirement spots, such as Naples and Palm Bay in Florida. Northern Virginia and Hampton Roads, more so than the rest of Virginia, typically experience out-migration of residents approaching retirement age. And as baby boomers continue to pass the median retirement age of 62, it shouldn’t be too surprising that the number of 55- to 64-year-olds moving out of Virginia is increasing. 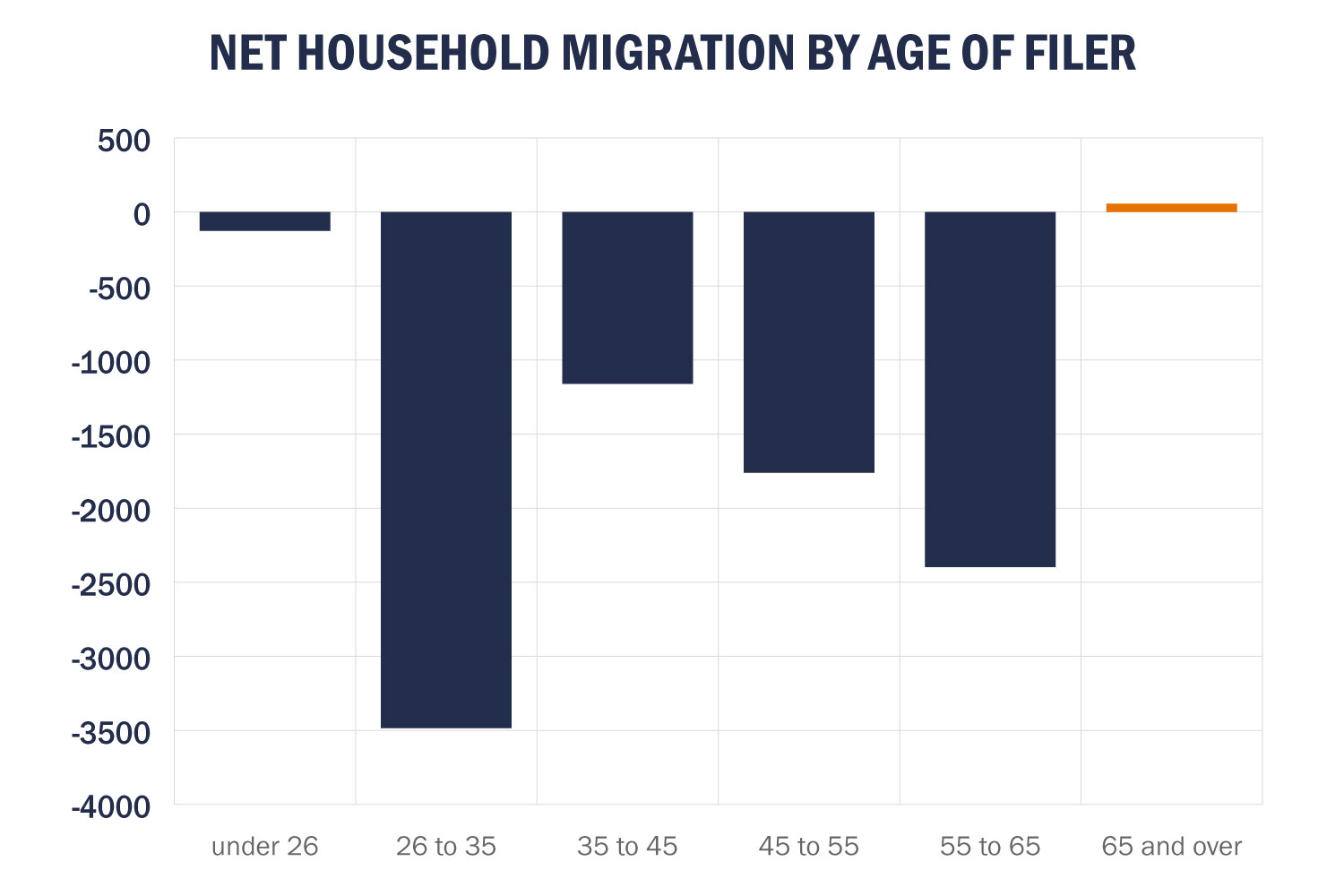 The largest age group moving out of Virginia are those who are in the most common age range to marry and start a family – 26 to 35 – which points to another possible reason why Virginia has seen a rise in people moving away. Since 2000, home prices in the Washington, D.C. area have risen faster than in any other major metropolitan area on the East Coast or in the South. Home prices in most of the metro areas that Northern Virginia residents are moving to are considerably lower than in Northern Virginia. The median home sales price in Houston and Raleigh was less than half the median home sales price in Northern Virginia. The combination of high housing prices and low wage growth may be spurring more young adults to look at other metro areas for a home and to start a family.

While Northern Virginia’s influence on the commonwealth’s demographic trends may be growing, demographic trends in Northern Virginia increasingly look like those of the other metro areas in the “BosWash” urban corridor, which stretches along Interstate 95 from Washington through Baltimore to Philadelphia and New York to Boston. In most of the corridor, household income and educational attainment levels are significantly higher than the national average, as are housing costs. For decades, most of the BosWash corridor has experienced out-migration to metro areas with healthy economies and more affordable housing. But until 2013, Northern Virginia differed from the rest of the BosWash corridor in that it did not have net out-migration.

In time, the economic impact of the federal budget sequestration on Virginia will dissipate. But whether out-migration will then end and Virginia will return to having thousands more people moving in than out is less certain.

Netflix to Add Ads. Why This Could Be a ‘Game-Changer’ for Your Viewing Experience END_OF_DOCUMENT_TOKEN_TO_BE_REPLACED

What’s Next for UVA’s Class of 2022? END_OF_DOCUMENT_TOKEN_TO_BE_REPLACED