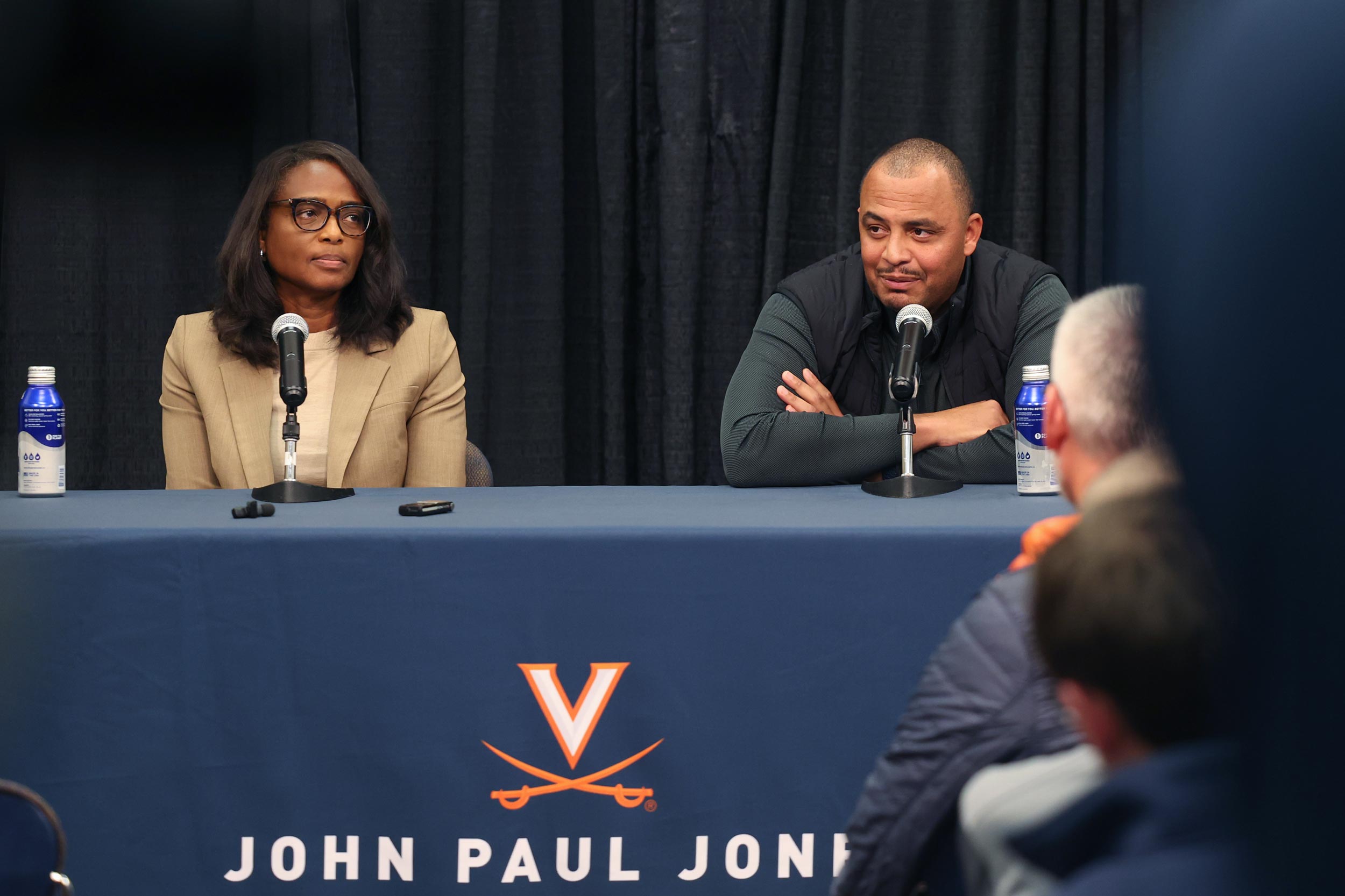 University of Virginia head football coach Tony Elliott was asked a question that pertained to his other title – loving father of two young boys – and his voice began to quiver.

“My 9-year-old,” Elliott said before taking a long pause. “He considers these guys his friends, and that’s what’s tough.”

Elliott, wearing a black vest over a black long-sleeve shirt, sat alongside UVA Director of Athletics Carla Williams on Tuesday at John Paul Jones Arena for a 30-minute news conference neither ever imagined having.

The topic was Devin Chandler, Lavel Davis Jr. and D’Sean Perry, the three Cavalier football players slain in Sunday’s shooting on Grounds. This was Elliott and Williams’ first public appearance since the tragedy.

Emotions were high as they faced a horde of local, regional and national news media.

“It feels like it’s a nightmare, to be honest with you, and I’m ready for somebody to pinch me and wake me up and say that this didn’t happen,” Elliott said.

Both Elliott and Williams said they were thankful for the support they’ve received from the University, Charlottesville and across the country. It helped as they navigated uncharted waters.

Elliott’s goal has been keeping the team together as much as possible.

“The first meeting was really, really tough,” Elliott said, holding back tears as he described Monday’s interactions with his players. “Really, really tough. [Tuesday] was much better. We were able to transition from the pain to finding a little bit of joy and celebrating the lives of Lavel, D’Sean and Devin.”

Davis, a third-year student, was a 6-foot-7 receiver with National Football League aspirations, but his height was just one reason why he had presence, Elliott said. “A big smile – lights up a room,” he said.

Elliott recruited Davis when Elliott was an assistant coach at Clemson University and Davis a star player at Woodland High School in South Carolina.

“He has a gentleness about him, but he is passionate about what he believes in,” Elliott said. “So a lot of the stories today were just about the silly basketball arguments they would have and debates in the locker room…. The other thing that resonated is just how good of a teammate he was and how much he loved his teammates and would do anything for his teammates.”

Perry, a fourth-year student, was a versatile defensive player from Miami, but that hardly told his whole story, Elliott said.

“I don’t think many people outside of our program understand how special D’Sean was,” he said. “Very, very, very artistic. Could draw. Could shape pots with clay. Loved music. Very, very cultured and well-rounded. Just a great teammate. And he had a sense of humor that was one of a kind.”

Chandler, a third-year student, transferred to UVA from the University of Wisconsin last winter. Though his time with the team was brief, he was already making an impression on his teammates.

“He was the life of the party. He always kept everybody entertained,” Elliott said. “He was serious, but he had his own way of being serious and he would keep everybody energized. He found a way to make it fun, even though sometimes the work that they have to do on a daily basis can be very monotonous in order to improve their skill level.”

Chandler, Davis and Perry’s impact was also felt in the Elliott home. These were genuine buddies of A.J., Elliott’s oldest son, and finding ways to explain their untimely deaths has been heavy.

“We're taking it one day at a time, trying to teach a 9-year-old about the reality of life on a level that he can understand it,” Elliott said. “We're just putting our arms around him, loving him, supporting him, and trying to teach him as much as he can comprehend.”

Memorials to Chandler, Davis and Perry have been created throughout Grounds, including a display outside Scott Stadium. That’s where the Wahoos are still scheduled to host Coastal Carolina University on Saturday. A decision whether to play the game has not been made.

“We’ll make it together,” Williams said. “It will be a discussion with Coach and the team. Obviously, they’re going through a lot and we want to make sure they’re involved as well. We’ll use our best judgment, but it will be soon.”

Williams, the mother of three children, said she attended Monday’s vigil on the Lawn with her son and a friend. She was moved by the scene.

“It was amazing. It was remarkable to see all of those students out there supporting their classmates like that. It was healing, quite frankly,” she said.

“We’re going to celebrate those lives,” he said.