Perspective: As Women Have Advanced in the Workplace, Not All Have Gained Equally 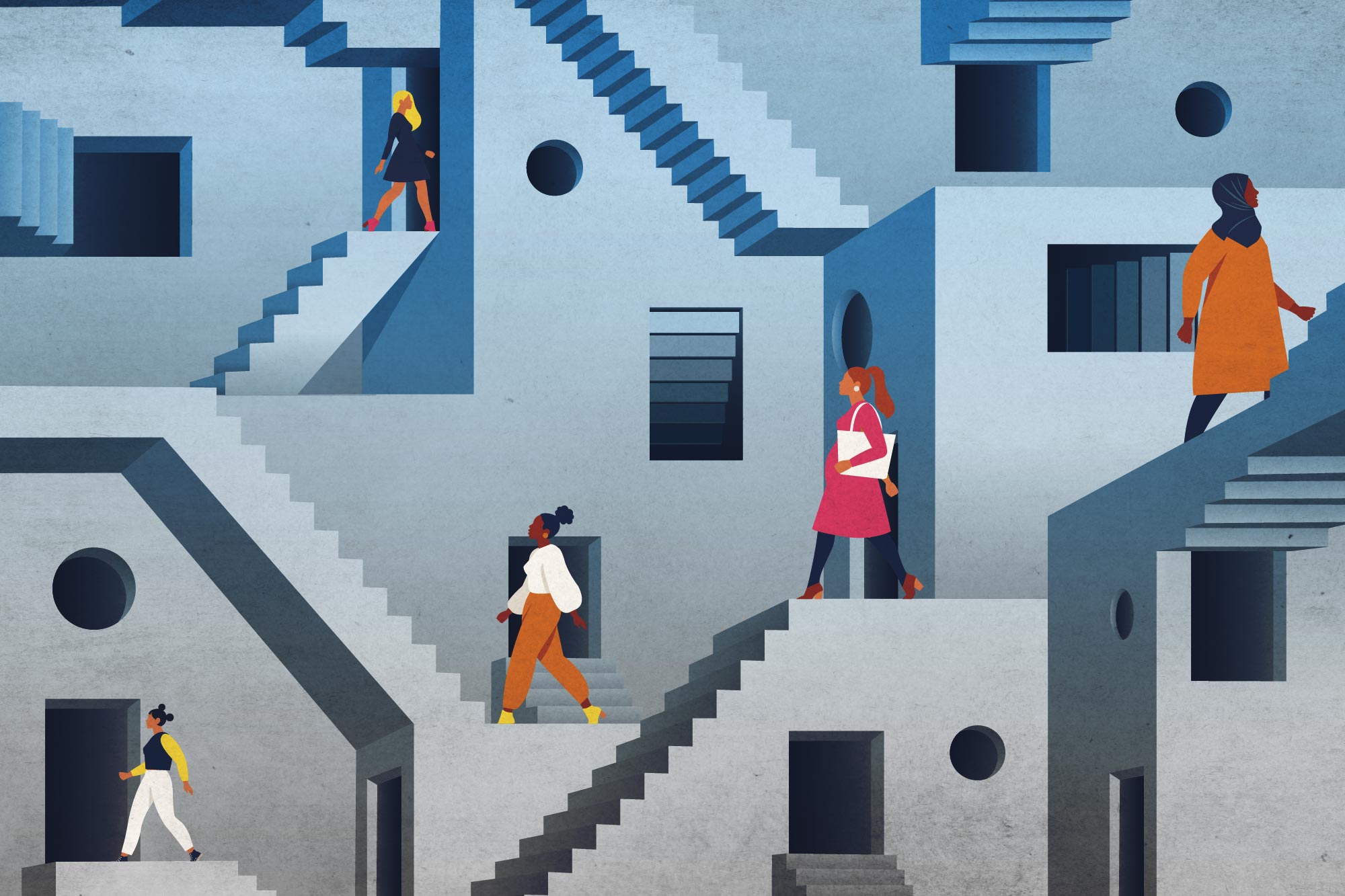 Allison Elias, an assistant professor of business administration at the University of Virginia’s Darden School of Business and author of the forthcoming book “The Rise of Corporate Feminism: Women in the American Office, 1960–1990,” answers in a recent Q&A whether all women benefit from efforts to advance gender equity in the workplace.

A “Triple Hoo” who earned her bachelor’s degree in studies in women and gender, and her M.A. and Ph.D. in history, Elias comments on where we’ve been – and where we’re going.

Q. How would you describe the situation for working women in our society right now?

A. Well, it depends who you are and where you are. There certainly is more attention to increasing women’s representation at the top. Arguably there is more support (mostly from the private sector) than ever before to increase women’s representations on boards and in the C-suite, as well as in professional fields in which they have been historically underrepresented (e.g., STEM, finance).

In addition, while COVID seems to have had a disparate impact on women’s careers, it also has enhanced public attention to the difficulties women and men face as employees and caregivers. On the other hand, if you look at labor statistics in the U.S. and globally, you see some of the same troubling trends that most women of color face a larger gender wage gap than do white women at work. Furthermore, occupational segregation by gender and race is still a major component of these persistent wage gaps. Female-dominated jobs pay less, and women of color are overrepresented in these positions.

I’m not sure we pay enough attention to the intersections of gender, race and socioeconomic status. Career opportunities are really tied to social capital and educational resources that are not available to all women. This is something that has always fascinated me – the gender of economic inequality, so to speak.

Q. Could you explain that – “the gender of economic inequality”?

A. I think when Sheryl Sandberg’s “Lean In” came out in 2013, a lot of professional women – myself included – felt an exciting shift in the discourse around women and work. But my own field of research, which looks at the plateau in pay and opportunity for women in the lower echelons of office work – the lower-paid, white-collar jobs –wasn’t part of this conversation.

This is a group that has been left out of many of the most visible and impactful feminist victories of the 1960s and ’70s, particularly in tandem with the decline of a more traditional employment relationship. So there’s this dichotomy when we talk about women’s advancement in the workplace, because the most mainstream ideas and solutions seem to apply better to some women than to others.

Q. In “The Rise of Corporate Feminism,” you look at the subject through the lens of the secretarial profession in the U.S. between the 1960s and the 1990s. What do you find?

A. Occupational categories were constraining as a factor for advancement, especially during a time of tremendous social change whereby the job title of secretary represented an older corporate order and the professional identity of the secretary came under fire.

I find the language used to describe certain types of work (as well as terminology regarding women’s problems at work) fascinating because it marginalizes some groups while advancing others. So even the term “corporate feminism” is interesting to me since it has come to mean the advancement of more privileged women into leadership positions.

But women’s activism in corporate America was not always that narrow. When you look at the feminist movement in the ’60s, it’s not just happening in marches and on the streets, there’s plenty of debate going on in corporate contexts – in banks, the insurance companies, publishing houses and so on – with women of varying socioeconomic statuses in the ’60s and ’70s meeting at work to discuss potential solutions for a variety of problems. In the ’70s, you see a more unified agenda in these grassroots women’s caucuses in the private sector, with many women engaged who did not consider themselves “feminists.” There’s a desire to help lower-paid women gain access to training to help them get into managerial positions. There is a push to make affirmative action operate via salary, not just job title. So there is earnest work to make structural changes in this period.

At the same time, from the ’70s onward, the notion takes hold that growing HR functions could promise meritocracy. But with this meritocratic promise, or even veil, we also get a flood of prescriptive literature to help women navigate their careers, and in a sense, to help women “fix” themselves.

Q. So HR practices were increasingly geared to some, but not all women in the workplace?

A. I would say that the growth of HR remedied some structural issues like sexual harassment – not to say that sexual harassment is not a problem still, just that it does carry stigma depending on industry. And it helped with a lot of professional women’s problems, heralding an era of more merit-based hiring and promotion. This meant greater career mobility for women who had the right educational credentials and requisite social capital to enter jobs with existing promotional paths.

But, given the opening of these opportunities to women, you also find the splitting of a more unified agenda: Some concerns are supported wholeheartedly by corporate mechanisms, while others become issues that move under the umbrella of economic inequality (not necessarily gender inequality), which shift out of corporate view.

Q. If it’s down to educational credentials and social capital, could one argue that this is less of a gender issue than a general inequality issue?

A. Except that the ports of entry that women have into corporate America have been distinct from the places that men enter. You are right that this is also a general inequality issue, meaning other inequalities like race, class and immigration status matter. But traditionally women have gravitated or been pushed toward the types of jobs that have less opportunity for advancement.

In recent years, yes, more men have been coming into companies via the clerical route, but these are jobs that are still dominated by women. Women still account for over 70% of all secretarial and clerical jobs in the U.S. today, according to the Bureau of U.S. Labor Statistics. These jobs are susceptible to automation and outsourcing. Training and development are low and turnover is high.

As women have gained more access to managerial and executive roles, we are at a point in time in which these kinds of roles are changing in established firms. A managerial job is no longer a long-term “life” role with a stable advancement path. Organizational boundaries are more fluid and people have to change organizations to advance. Women today simply don’t have access to the same perks a “company man” might have enjoyed in the ’50s.

Q. What does your work find about the historical dichotomy – and its implications – between professional men and women?

A. It looks at the different segments or spheres that men and women have traditionally occupied in the workforce and society, and argues that these imprints have relevance to existing structural problems today.

One of my most recent papers, “Business Schools and The Role of the Executives’ Wives,” looks at the way U.S. business schools in the late ’40s and ’50s would offer training courses to the female partners of their MBA students and executives. These were courses geared to helping women become better corporate wives – wives with the social skills to support their husbands’ advancement in their firms. Wives as resources for businessmen, in a sense, and actually a very crucial one for men to succeed.

The question is: Did business schools (unintentionally) help to cement this kind of gender-based segmentation? What we find is that by having these socialization courses for wives, schools did help to imprint this idea of different gender roles. And that could have actually made it harder for women, as they became students themselves, to adjust to the business school environment.

Q. What do firms stand to lose if women at all echelons of the hierarchy are not given the opportunity to advance in their careers, and what would you like to see in the future?

A. For organizations, it’s a lost opportunity. Firms lose out on internal talent that could be developed and assume leadership positions. We could be more creative about developing employees who are not in traditional feeder positions, and we could reflect more on our recruiting and promotional paths.

But I feel optimistic about the future, especially given the fact that activism and discourse about equality and justice (in regard to race and gender) are top-of-mind for business leaders. I think the private sector is leading the way to establish initiatives and programs that advance talented employees and help to ameliorate inequalities in outcomes.

Allison Elias is author of the forthcoming book, “The Rise of Corporate Feminism: Women in the American Office, 1960–1990” and co-author with Rolv Petter Amdam of “Business Schools and the Role of the Executives’ Wives,” which appeared in the Academy of Management Learning & Education.