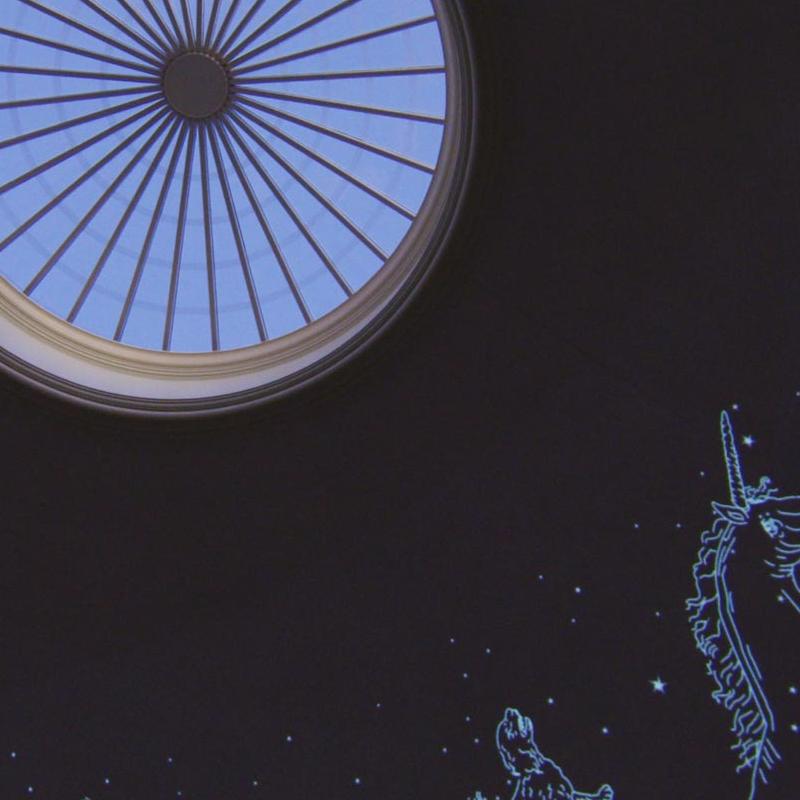 The night sky is being recreated in the Rotunda’s Dome Room for a limited time, thanks to a trio of University of Virginia Ph.D. candidates – not from astronomy or computer science, but from the English department. 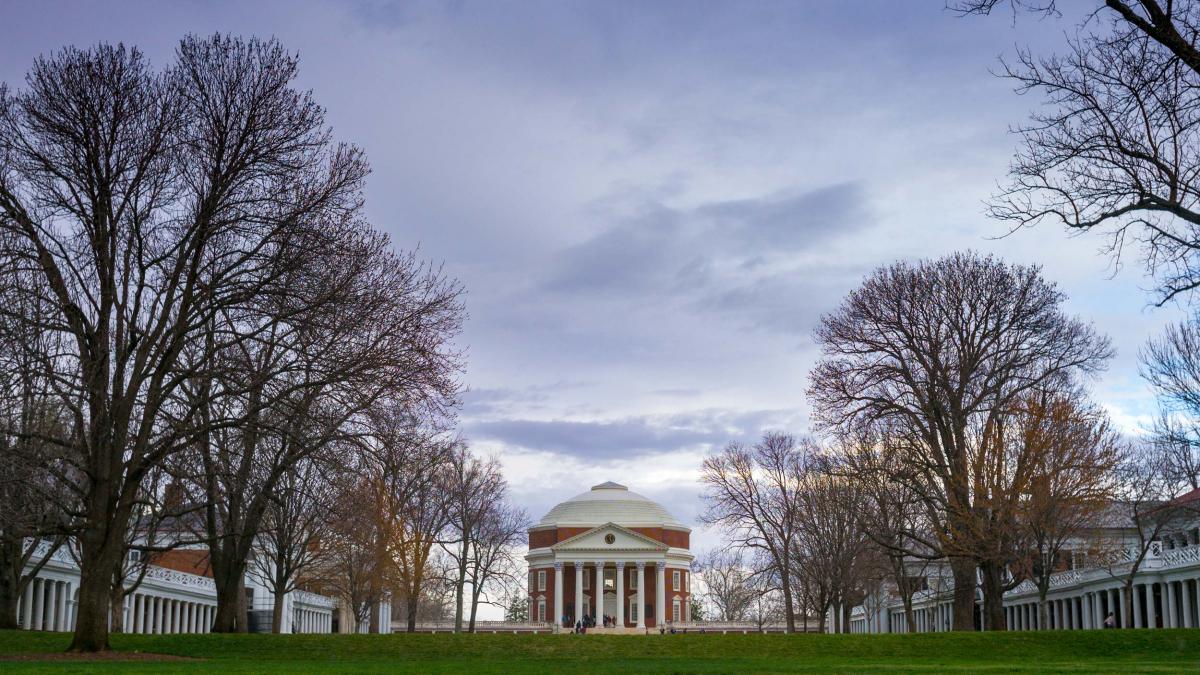 Neal Curtis, Samuel Lemley and Madeline Zehnder conducted some keen literary sleuthing to discover Thomas Jefferson’s original intentions for the Dome Room, and then harnessed modern digital technology to bring the planetarium to life in a way that the University’s founder could not have imagined.

“The concave ceiling of the Rotunda,” Jefferson wrote in 1819, “is proposed to be painted sky-blue and spangled with gilt stars in their position and magnitude copied exactly.”

The above quote comes from a small notebook that Jefferson used in the early stages of imagining the University, where he sketched some designs and took notes about materials, Lemley said. In a blog post, Lemley wrote that Jefferson intended for the stars to be repositioned every day, using “a mystifying (and dangerous) boom-and-pulley lift that would elevate an operator to adjust stars pinned to the Rotunda’s concave ceiling.” 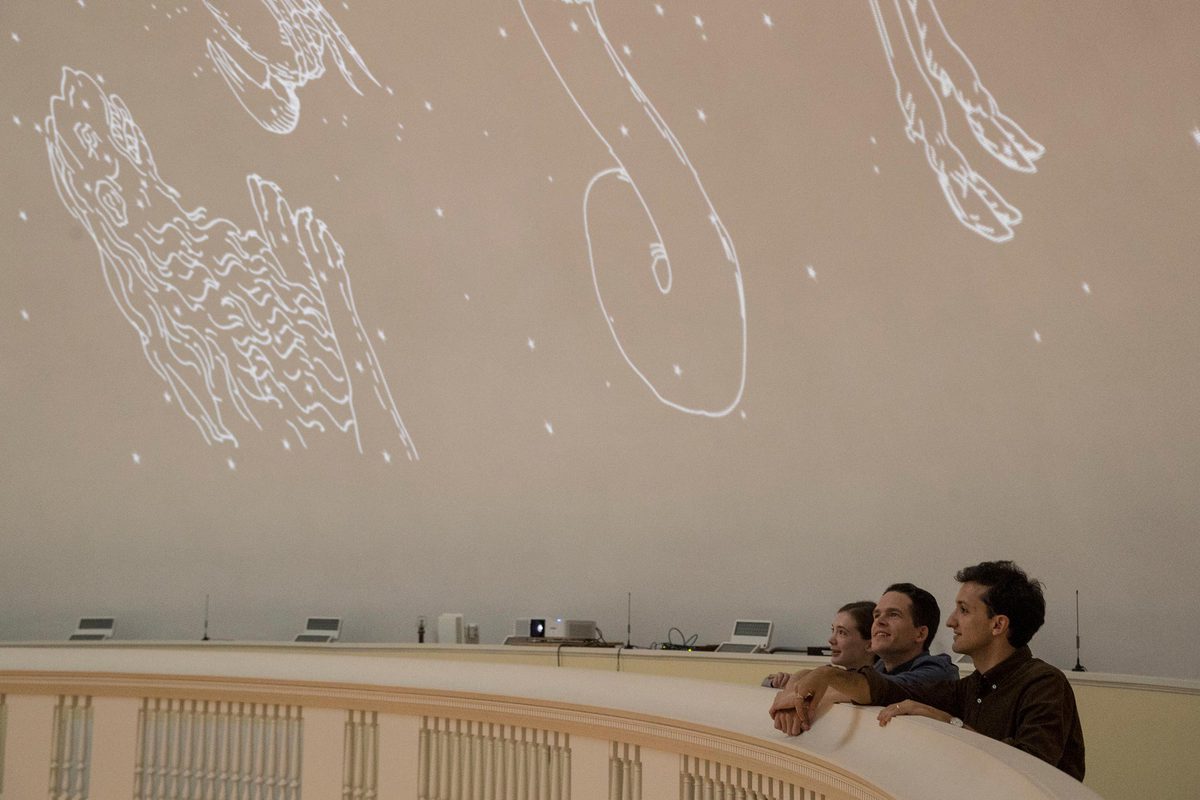 English Ph.D. candidates (from left) Madeline Zehnder, Neal Curtis and Samuel Lemley won a Jefferson Trust grant to recreate Jefferson’s idea for a Rotunda Planetarium. One of the projectors is visible in the center of the photo.

Zehnder said, “While [the planetarium is] not widely known, Douglas Harnsberger [an alumnus of UVA’s School of Architecture] has written on this subject, and it’s mentioned in the informational booklet available to Rotunda visitors.”

The doctoral students’ Rotunda Planetarium – opening on Friday in conjunction with a symposium and exhibition on “Science & Learning in the University of Virginia’s First Library,” – revisits his inaugural vision.

The Rotunda Planetarium will be displayed during student study hours Sunday through Tuesday evenings, and the Dome Room will be open to the public from 6 to 10 p.m. on Nov. 30, Dec. 6, Dec. 19, Jan. 11 and Feb. 1. The Ph.D. candidates hope to offer additional dates throughout the spring semester. 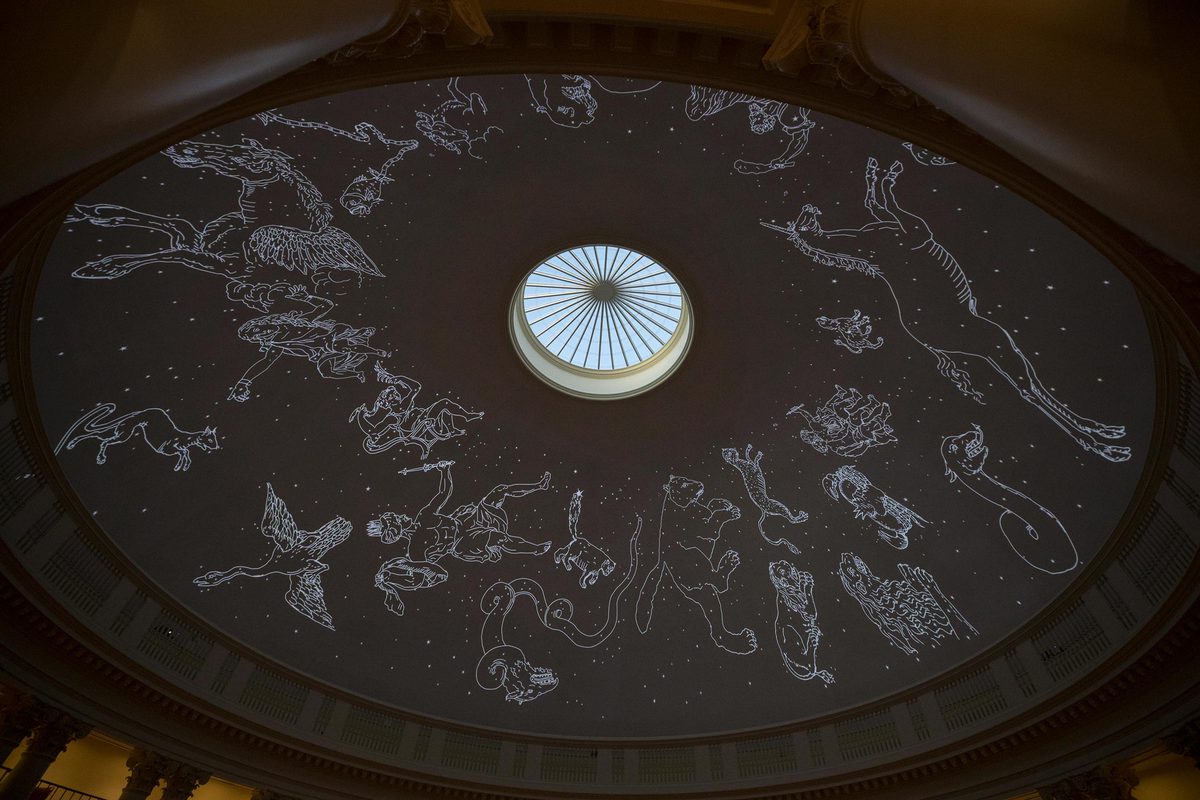 The team’s related exhibition displays books, instruments, specimens and artifacts from the Rotunda’s early history. The exhibit, located in several bookcases in the niches on the north side of the Dome Room, will remain on view until Feb. 18.

“This project is a great way to bring the public into the discoveries we’ve made,” Lemley said.

The Ph.D. students found Jefferson’s sketch for his planetarium in the Dome Room during research in the Albert and Shirley Small Special Collections library for their Rotunda Library Online project. (As Jefferson planned, the Rotunda served as UVA’s first library.) They read another letter in which Jefferson inquired about fresco painters, which he apparently couldn’t find in America. With expenses mounting and construction already delayed, he must have given up the idea.

Lemley, tipped off by a collector friend who’s a historian of science, also found out that Jefferson might have read about the planetarium design in a 1768 novella, “La princesse de Babylone,” written by Voltaire, the French author, historian and philosopher of the Enlightenment.

“Jefferson likely had Voltaire’s fanciful account of a planetarium in mind when designing his own,” Lemley wrote in his blog. “Among the gardens of Voltaire’s fictional Babylon was ‘a circular room, three hundred feet in diameter, with a vaulted roof painted blue and seeded with golden stars representing all the constellations and planets, each in its true position.’ What’s more, this spangled vault ‘rotated, so that the sky was moved by machines as invisible as those that move the cosmos.’” 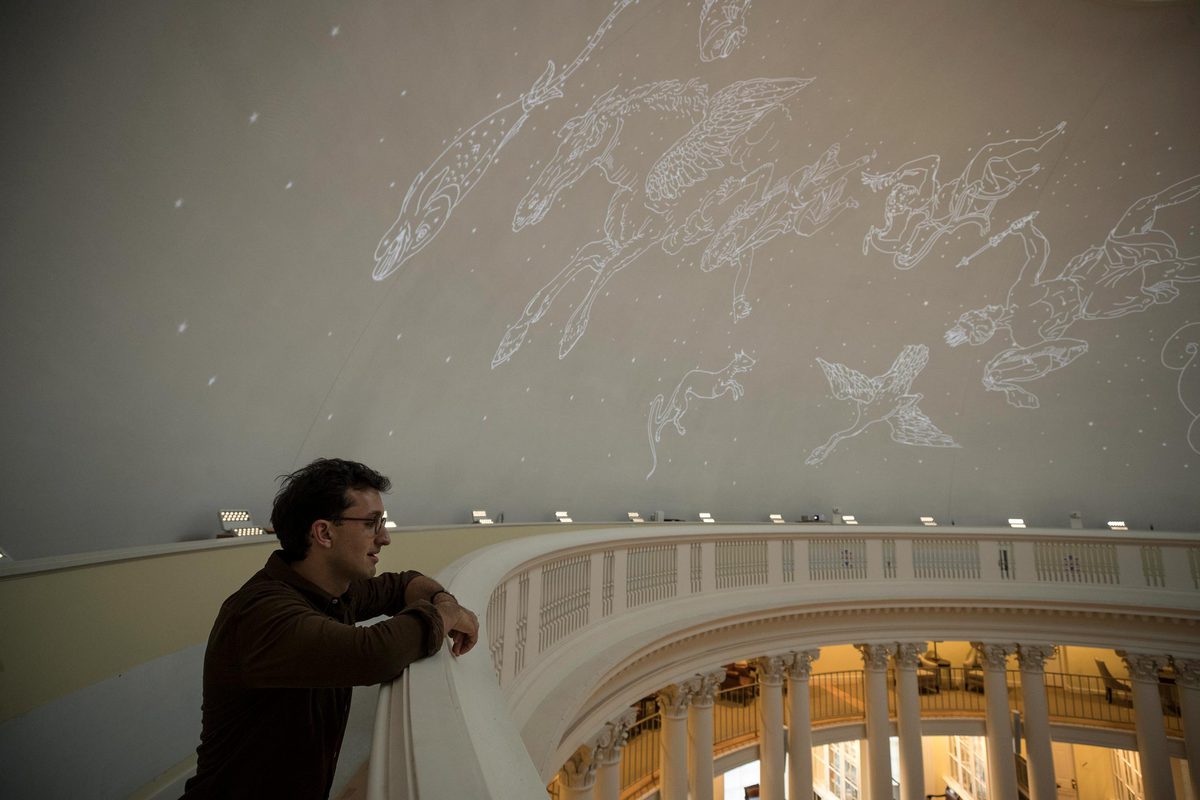 “Jefferson likely had Voltaire’s fanciful account of a planetarium in mind when designing his own,” Sam Lemley wrote in the Rotunda Planetarium blog. (Photo by Dan Addison, University Communications)

A Jefferson Trust grant supported the project and symposium, enabling the doctoral candidates to buy small, low-cost computers about the size of a cell phone and twice as thick. They networked the devices, mounted on handmade platforms, to run digital images from five projectors. The small computers are set up to turn on and off automatically.

The constellations that are displayed approximate the early-19th-century night sky from what scientists could discern with the early technology they had at the time: not-very-powerful telescopes. The trio used Flamsteed’s star atlas and his star catalog from the time. John Flamsteed was the first “Astronomer Royal” in the late 17th century and founder of the Royal Greenwich Observatory.

Jefferson ordered Flamsteed’s “Atlas Coelestis” and star catalog for the original Rotunda library, the researchers found, but the atlas did not survive. Flamsteed’s three-volume catalog of constellations did, however.

“The images we are projecting on the Rotunda ceiling come from the Flamsteed star atlas. It seems likely that the atlas burned in the [1895] Rotunda fire, although it’s difficult to determine conclusively,” Zehnder said.

Most of the books that did survive the Rotunda fire are housed in Special Collections, they said. The exhibit comprises other books on loan from private collectors, including a plate from Flamsteed’s atlas, as well as items from a museum that was once located on the Rotunda’s first floor.

The team found another copy of that atlas online and, using a graphic design program, they traced the night sky in five sections. The planetarium displays images of constellation characters, such as Andromeda and Cassiopeia, and animals, mythical and real, including Pegasus, Ursa Major and Ursa Minor, which we now call the Big Dipper and Little Dipper. 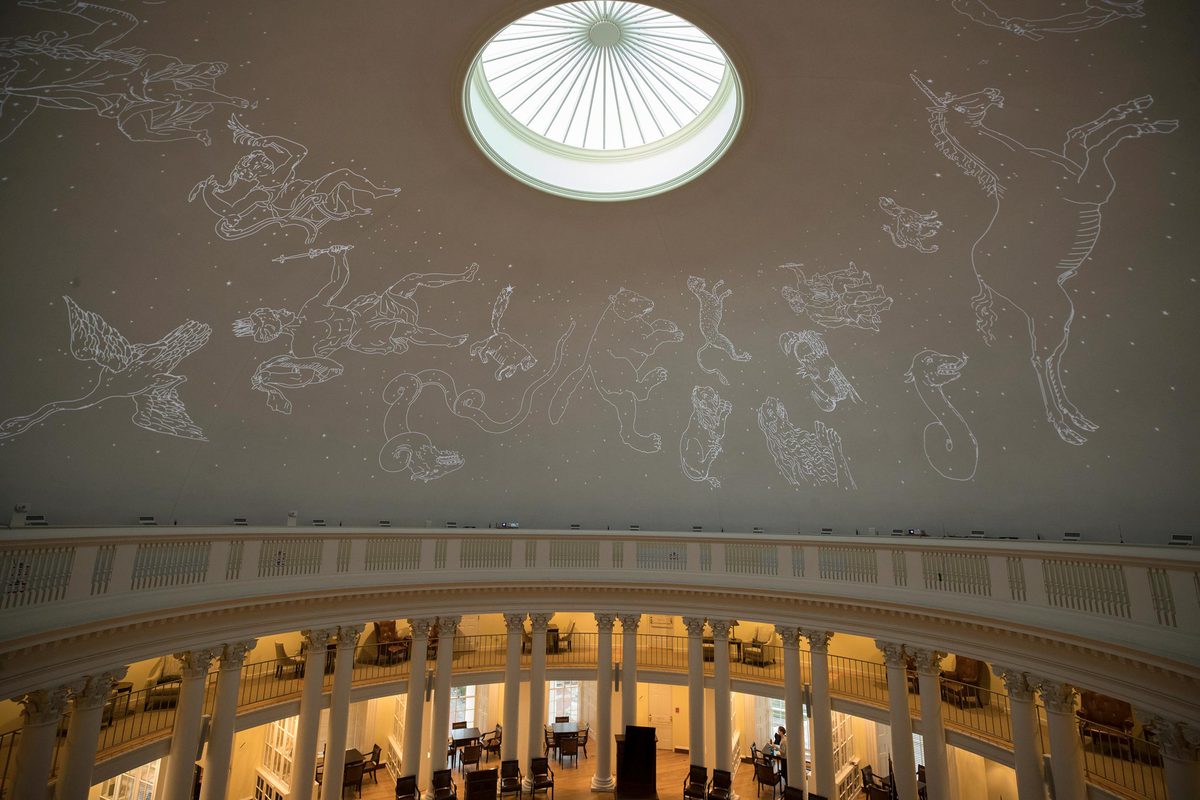 The Ph.D. candidates traced the images of constellations based on Flamsteed’s celestial atlas and star catalog. (Photo by Dan Addison, University Communications)

The team is also part of the public humanities lab in UVA’s Institute of the Humanities & Global Culture. In addition, Rare Book School has also provided support for the exhibit and symposium.

The Ph.D. candidates say research on the Rotunda is ongoing and never-ending.

“So many aspects of this vast history deserve to be foregrounded,” Curtis said. “We hope the symposium, the exhibition and the planetarium encourage people to follow more inquiries. I’m grateful for librarians’ remarkable preservation of records whose value might not have been realized at the time.”

They also would like to offer use of the small computers in the future.

“We hope that other departments and programs think about using the equipment for other projections or installations,” Lemley said.

Astronomers, for example, could use them to make more accurate and powerful projections of the night sky. 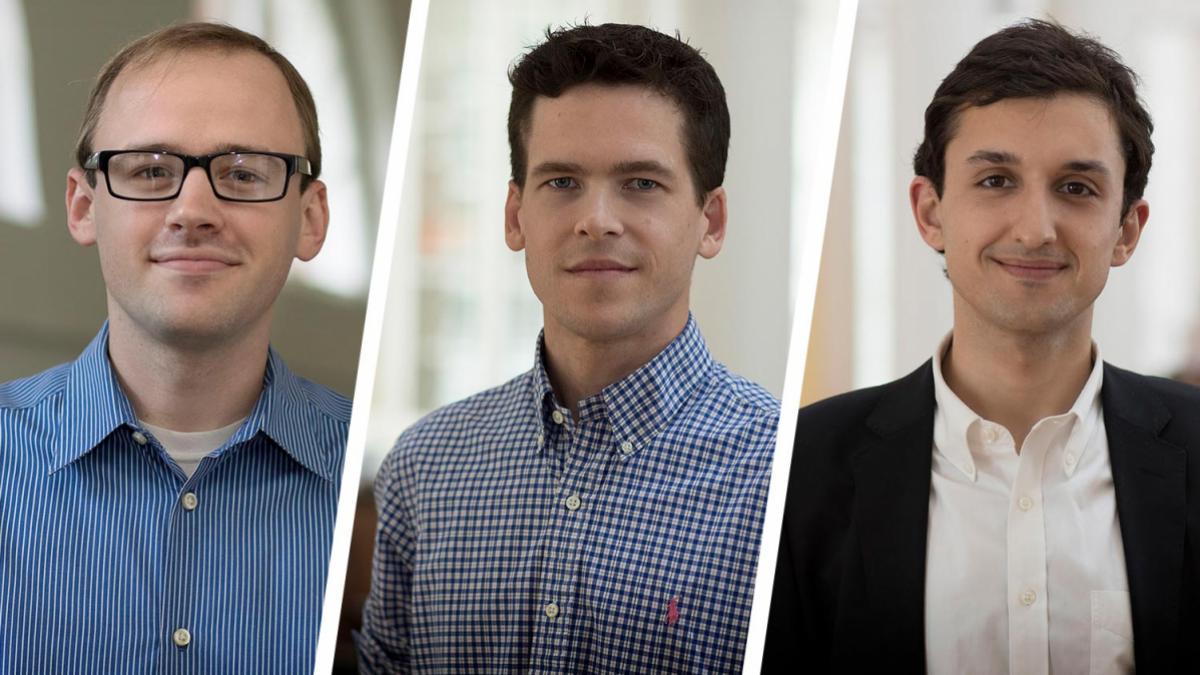 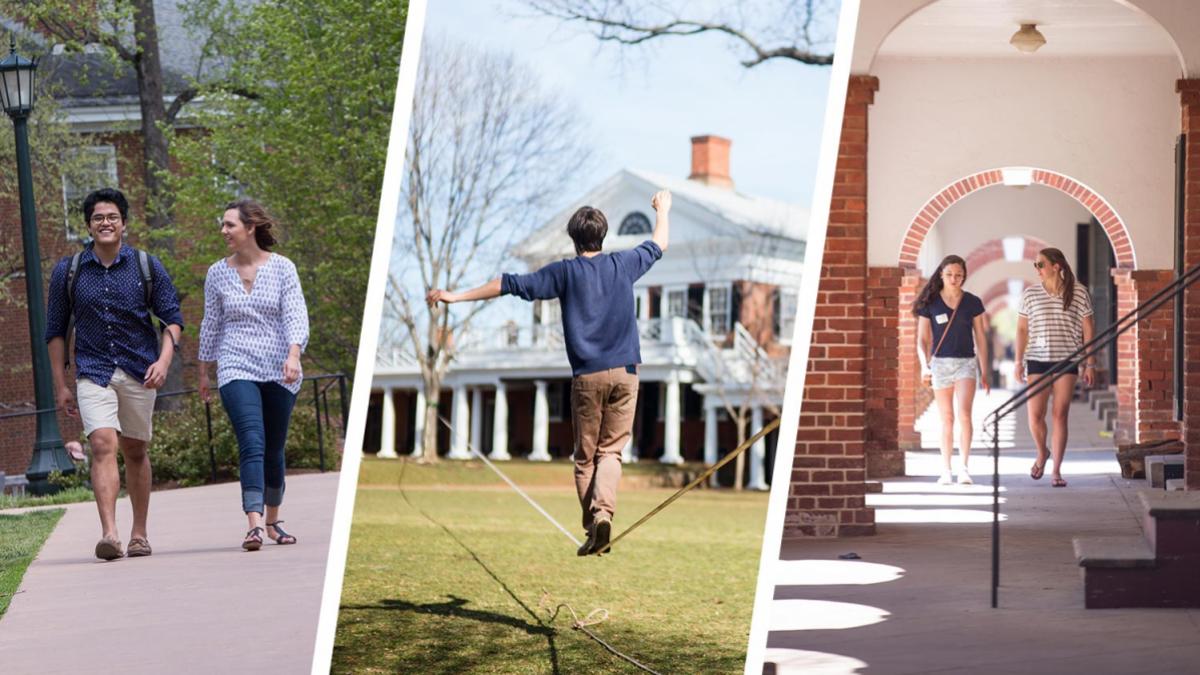 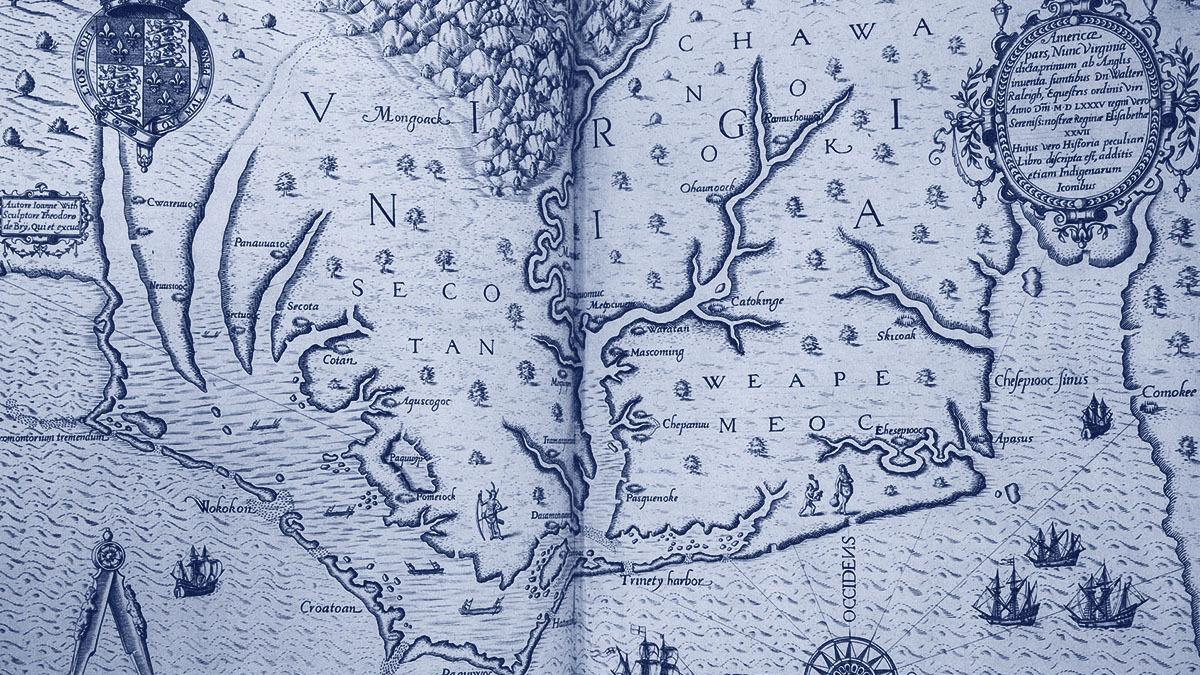