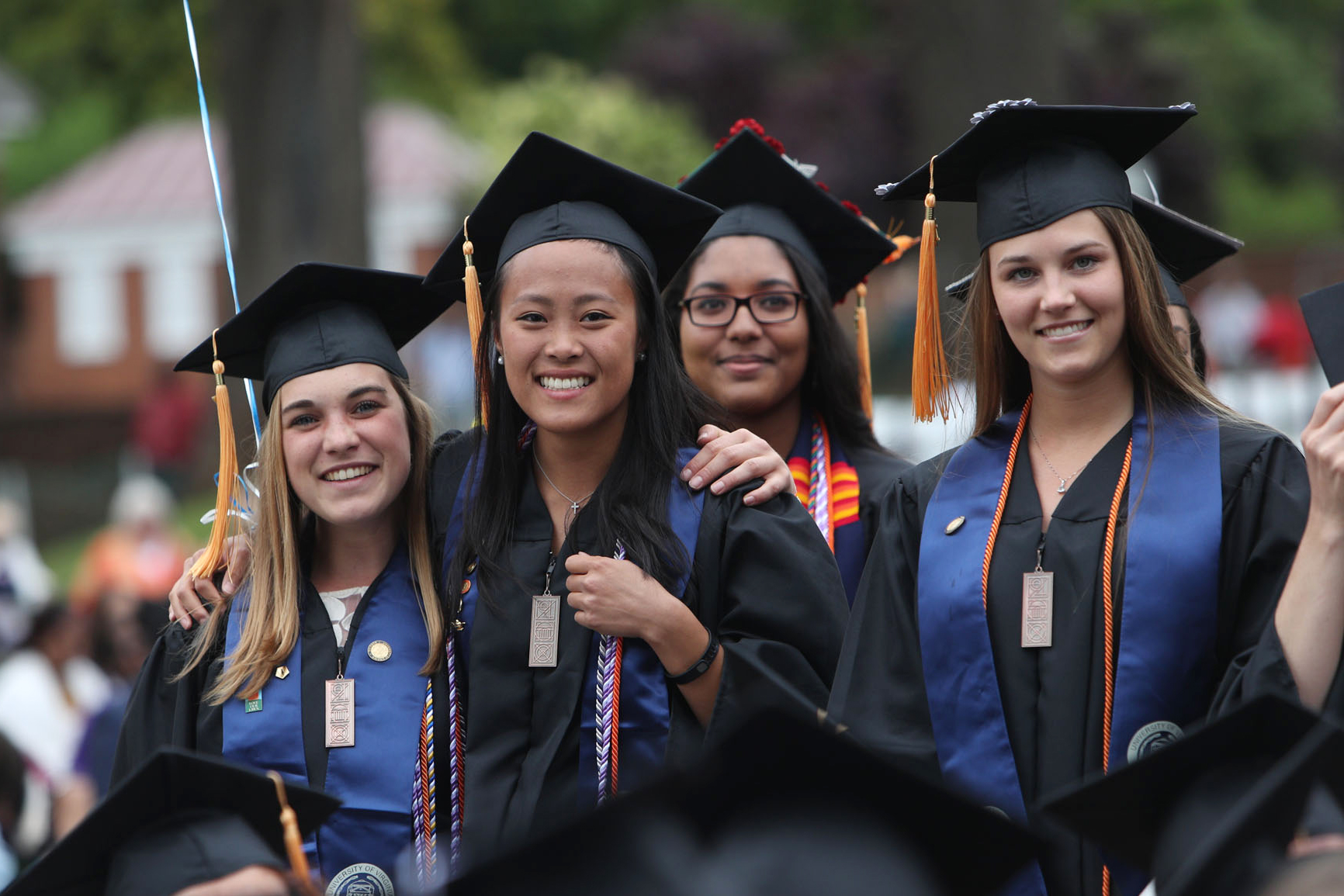 Graduates of 10 University of Virginia schools and the Data Science Institute processed down the Lawn on Sunday, their balloons bobbing in the cool breeze as they passed the throngs of excited friends and family who came to celebrate them.

Members of the Class of 2017 bore the special distinction of being the first of four graduating classes to celebrate UVA’s upcoming bicentennial with a commemorative mark on the zipper pull of their gowns.

As the graduates took their seats, President Teresa A. Sullivan remarked on another reason for the historic nature of this year’s graduation. Among the family members of the more than 3,600 graduates were two distinguished guests: Juan Manuel Santos, the president of the Republic of Colombia; and Ellen Johnson Sirleaf, the president of the Republic of Liberia. Both are recipients of the Nobel Peace Prize. 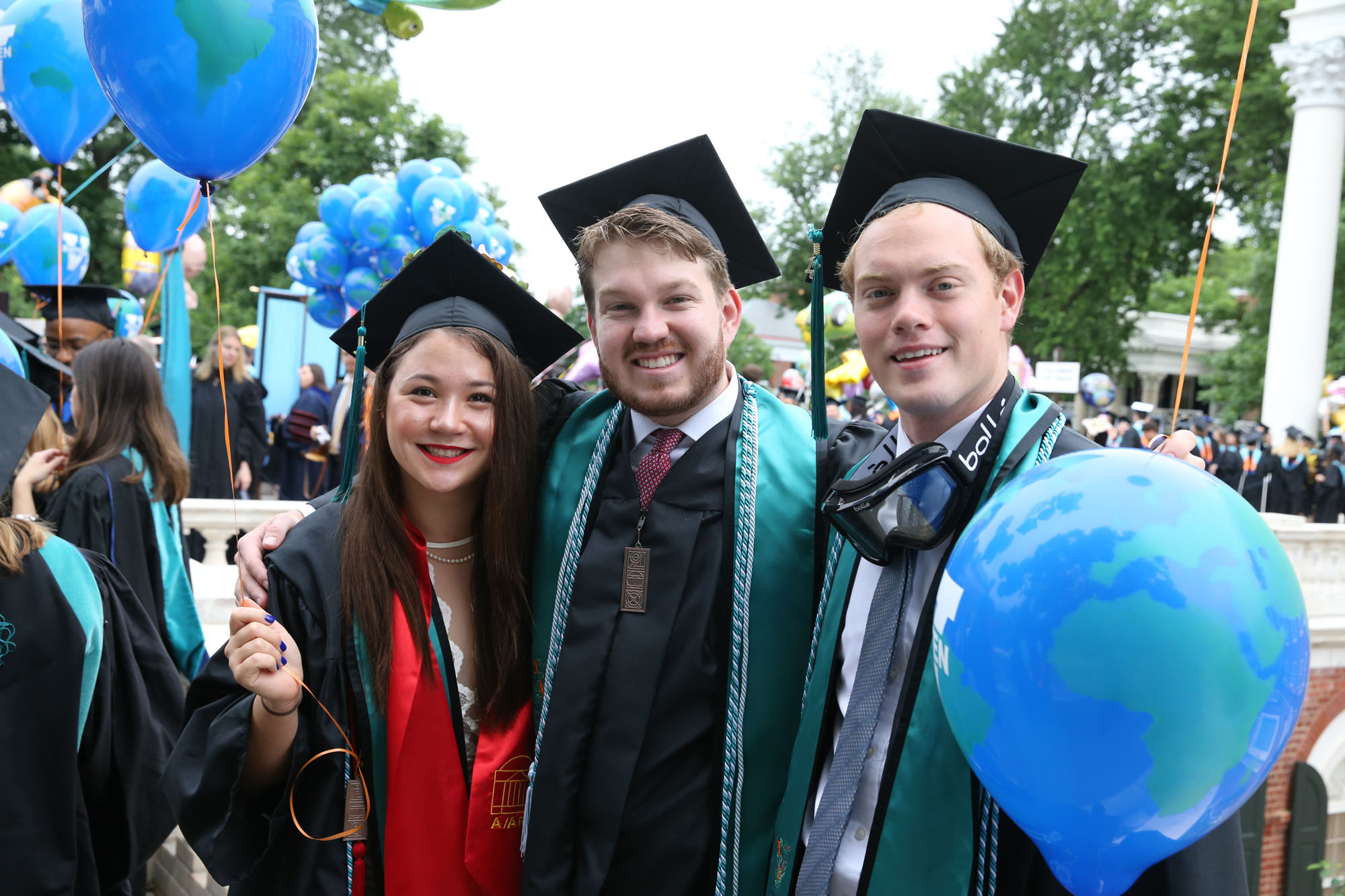 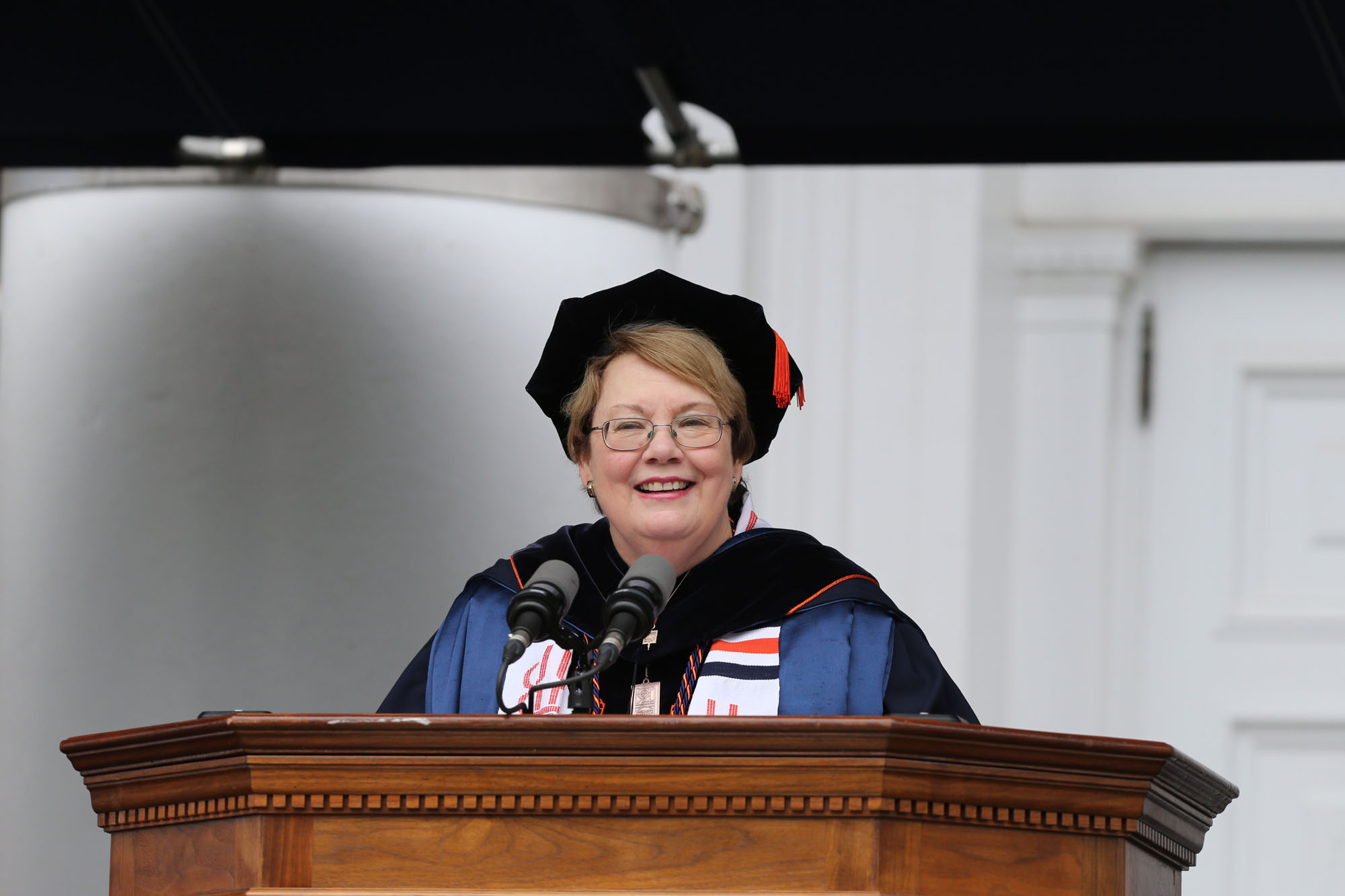 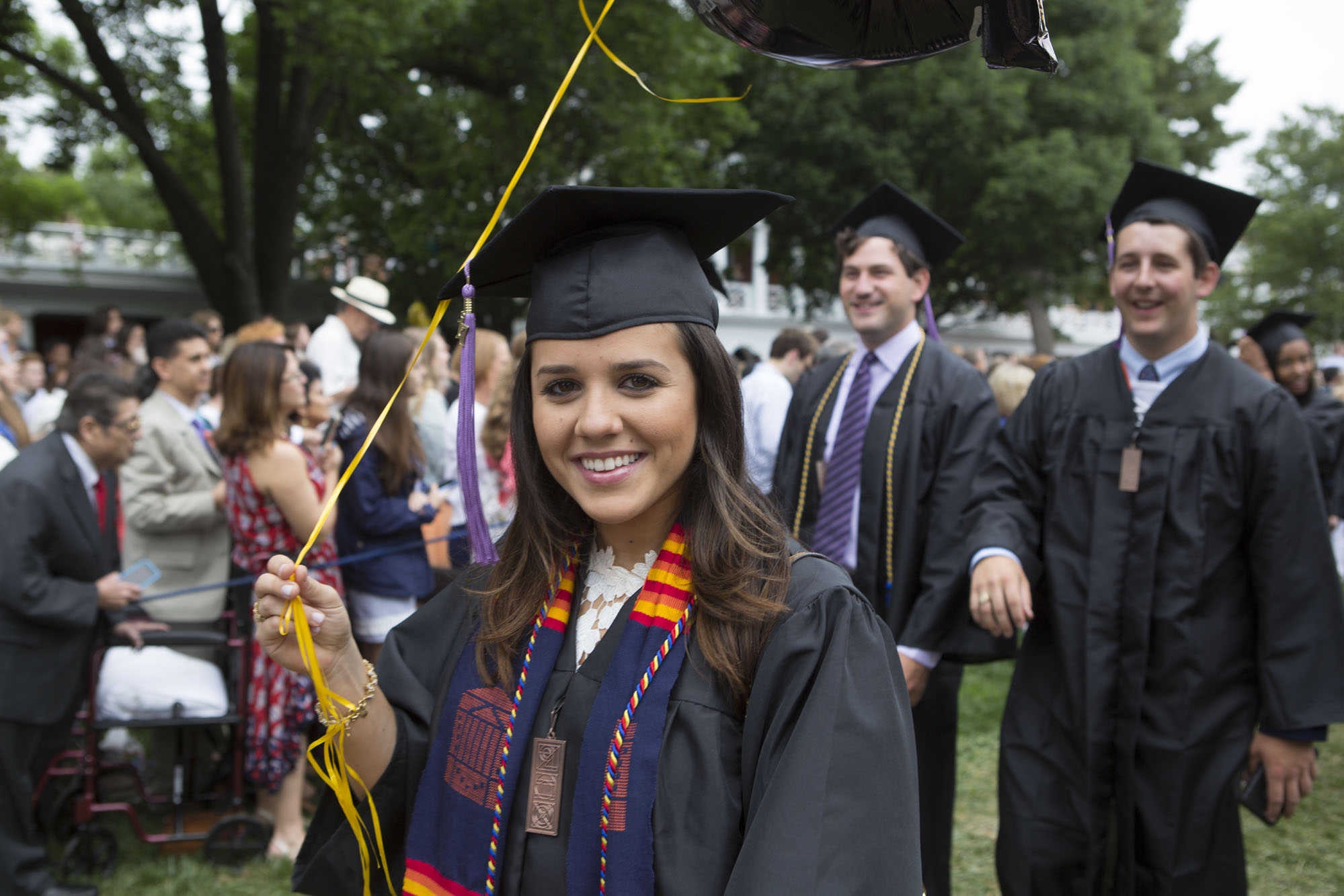 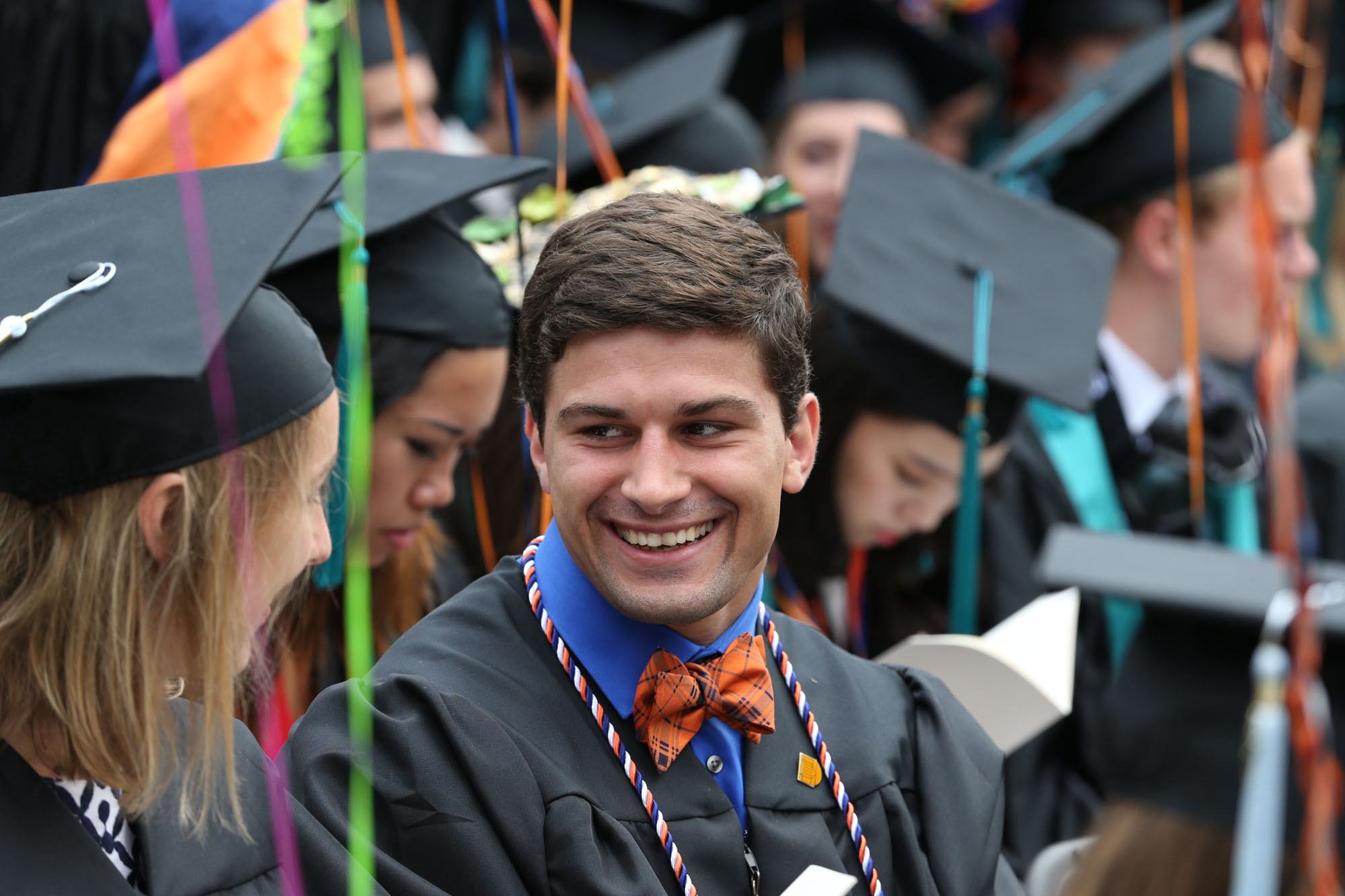 Beth Meyer, who earned two degrees from U.Va. and has been a member of the faculty since 1993, accepted a two-year term as dean of the School of Architecture beginning in July. 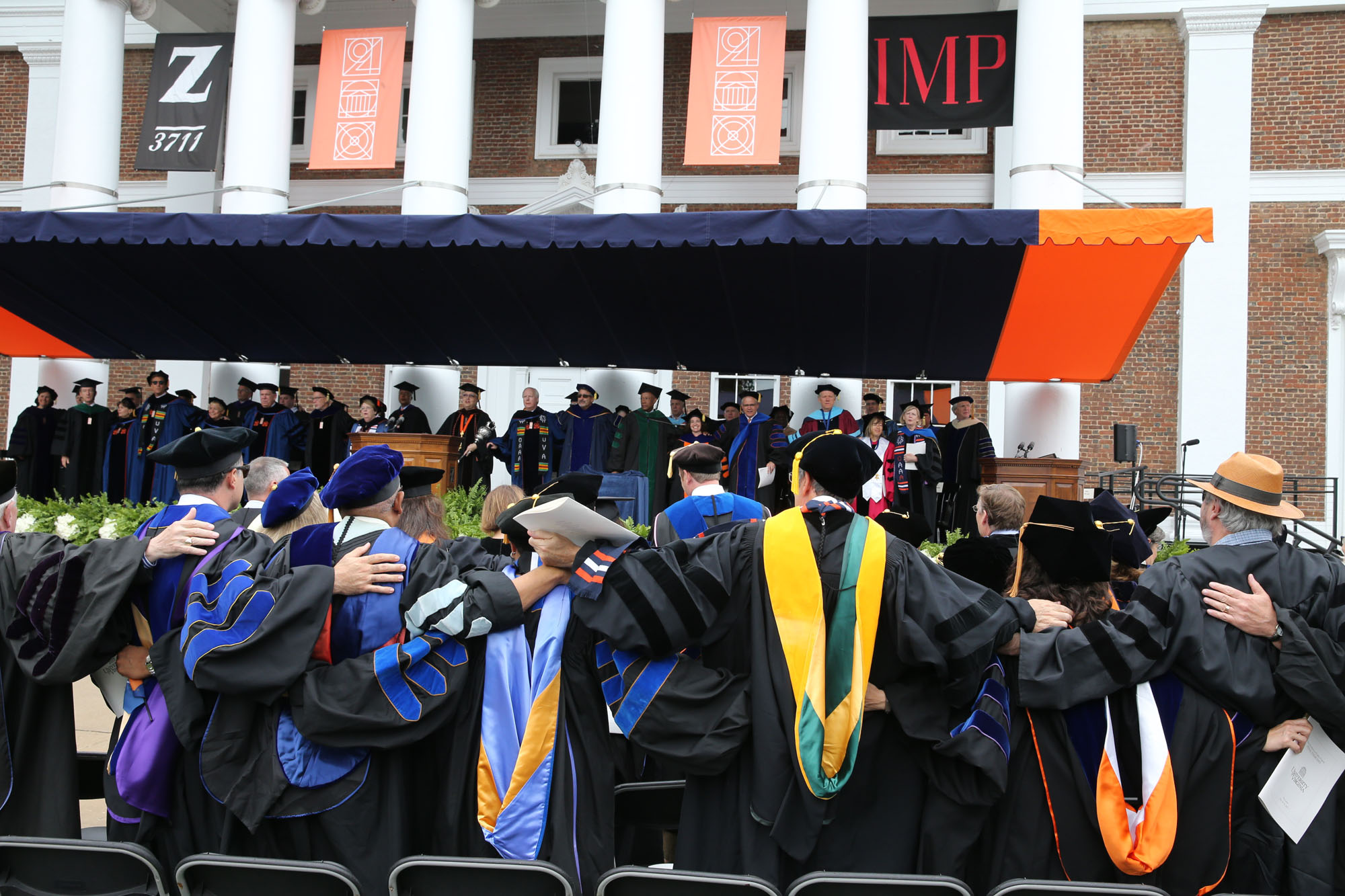 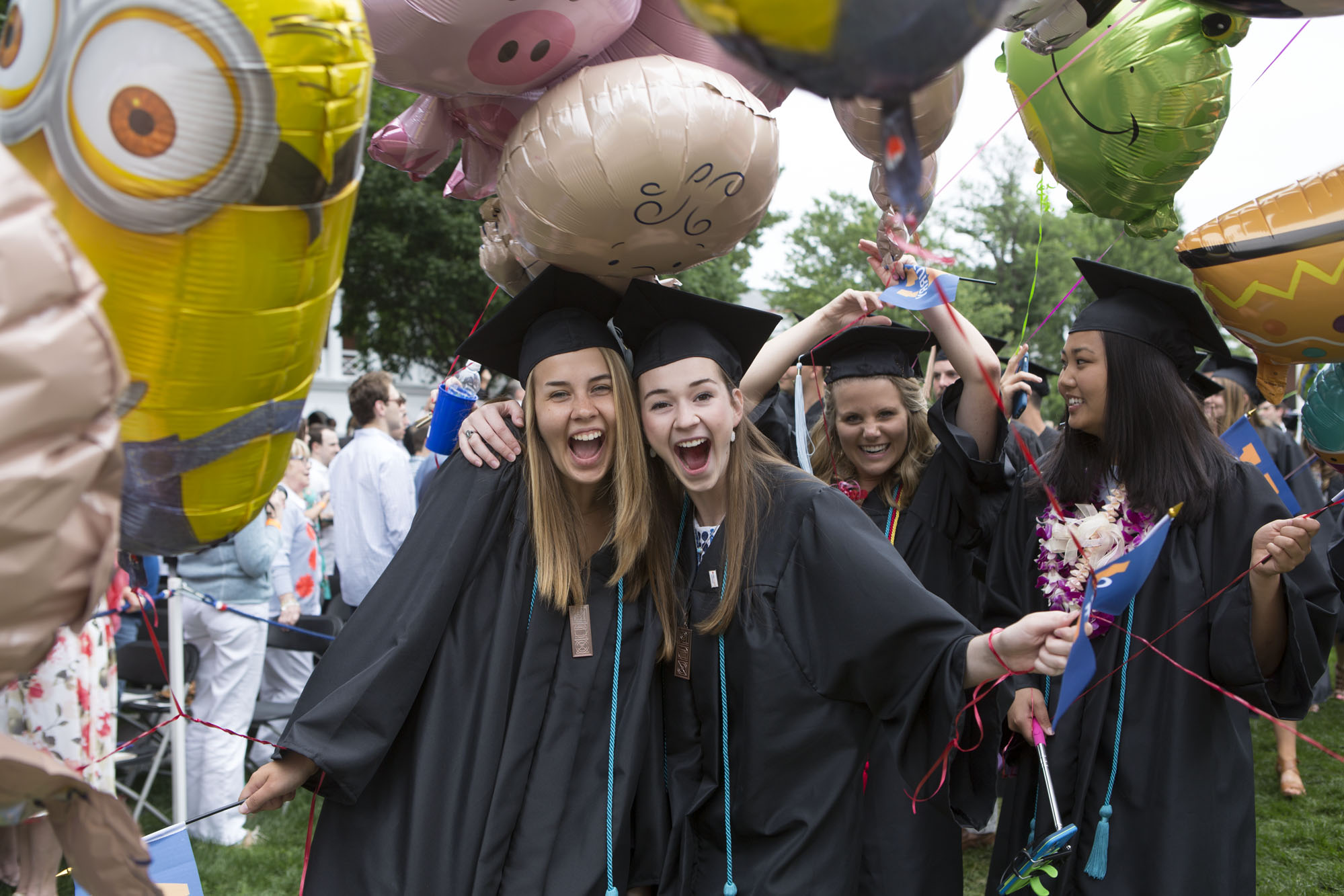 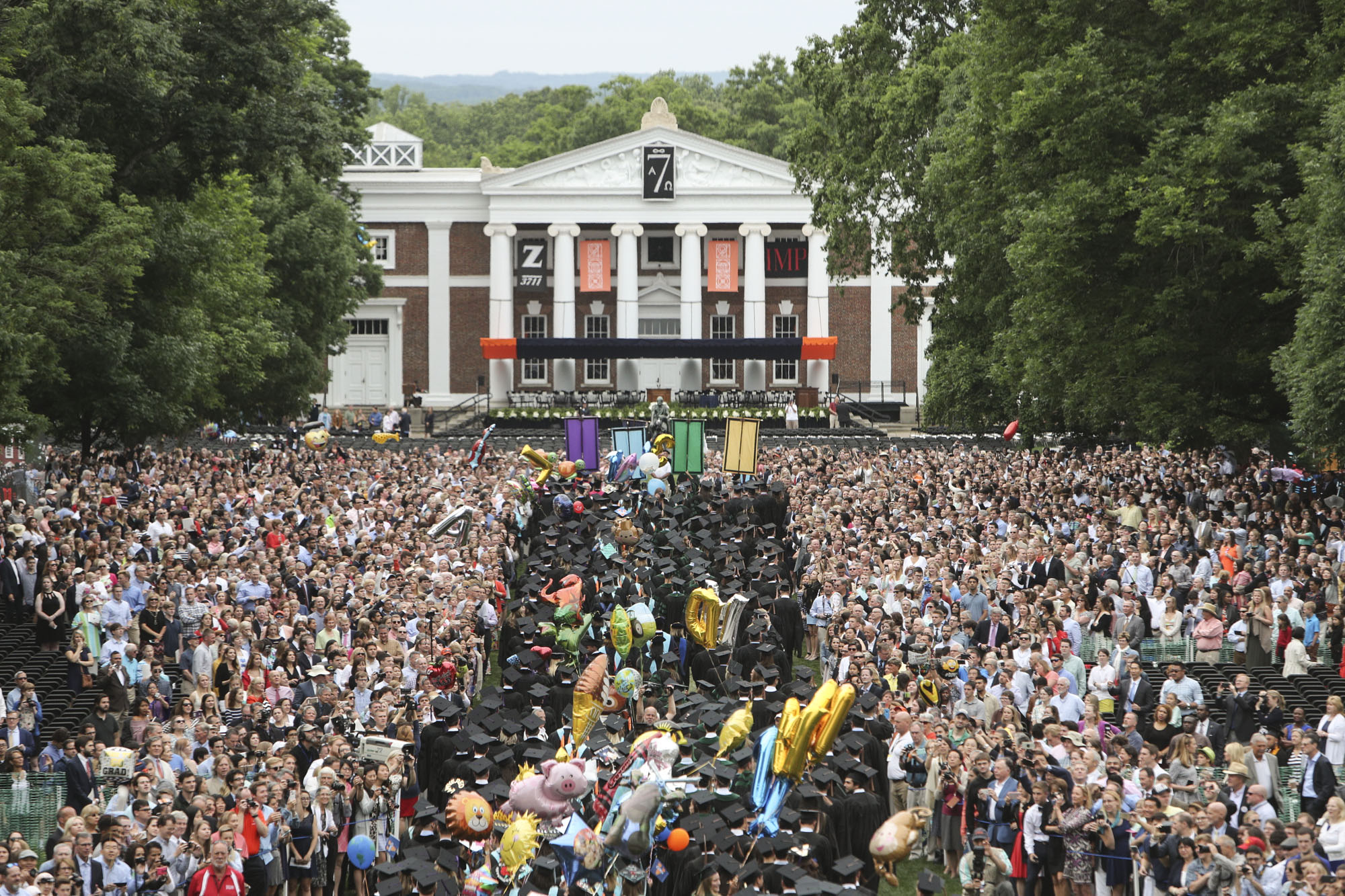 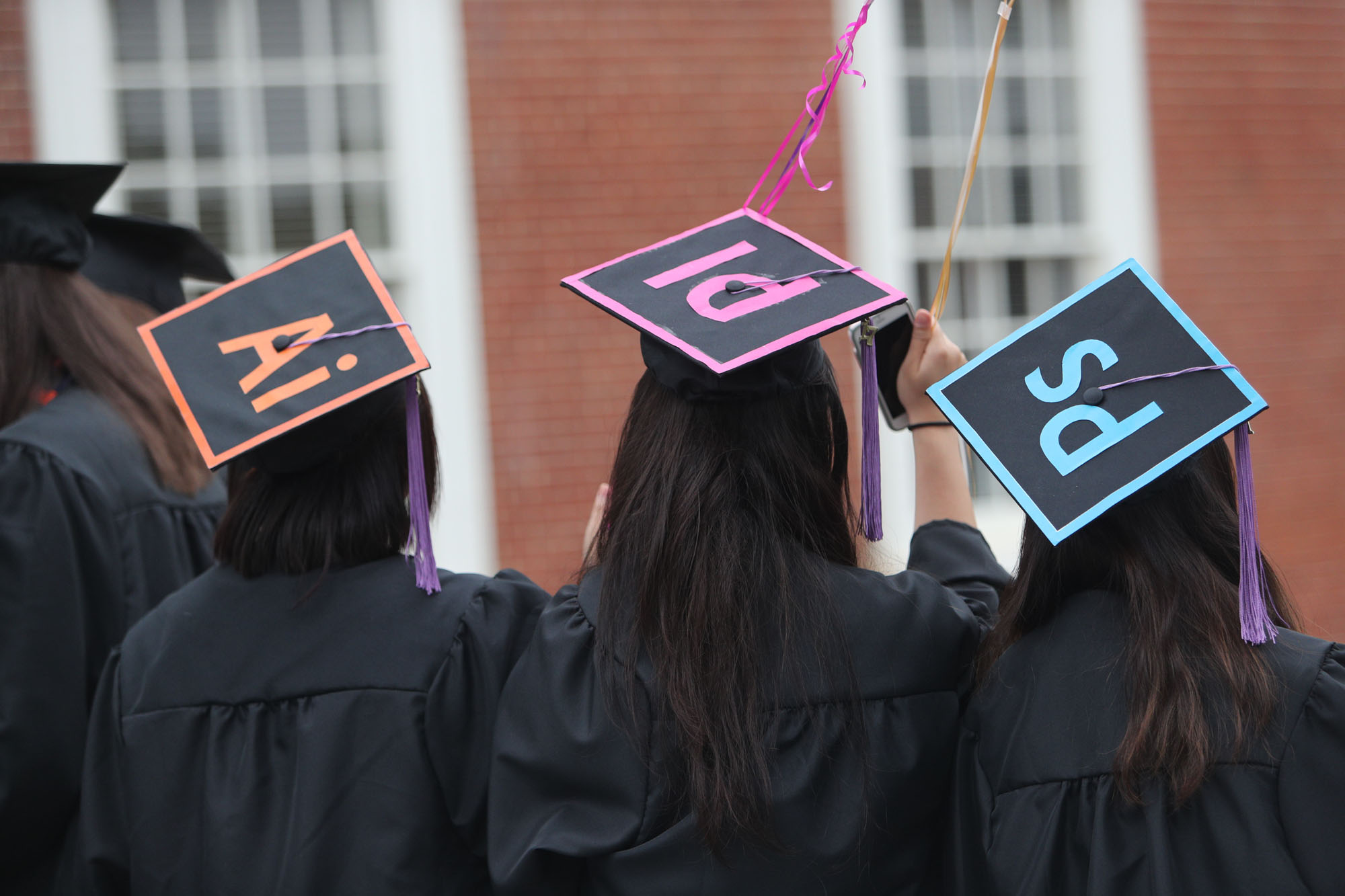 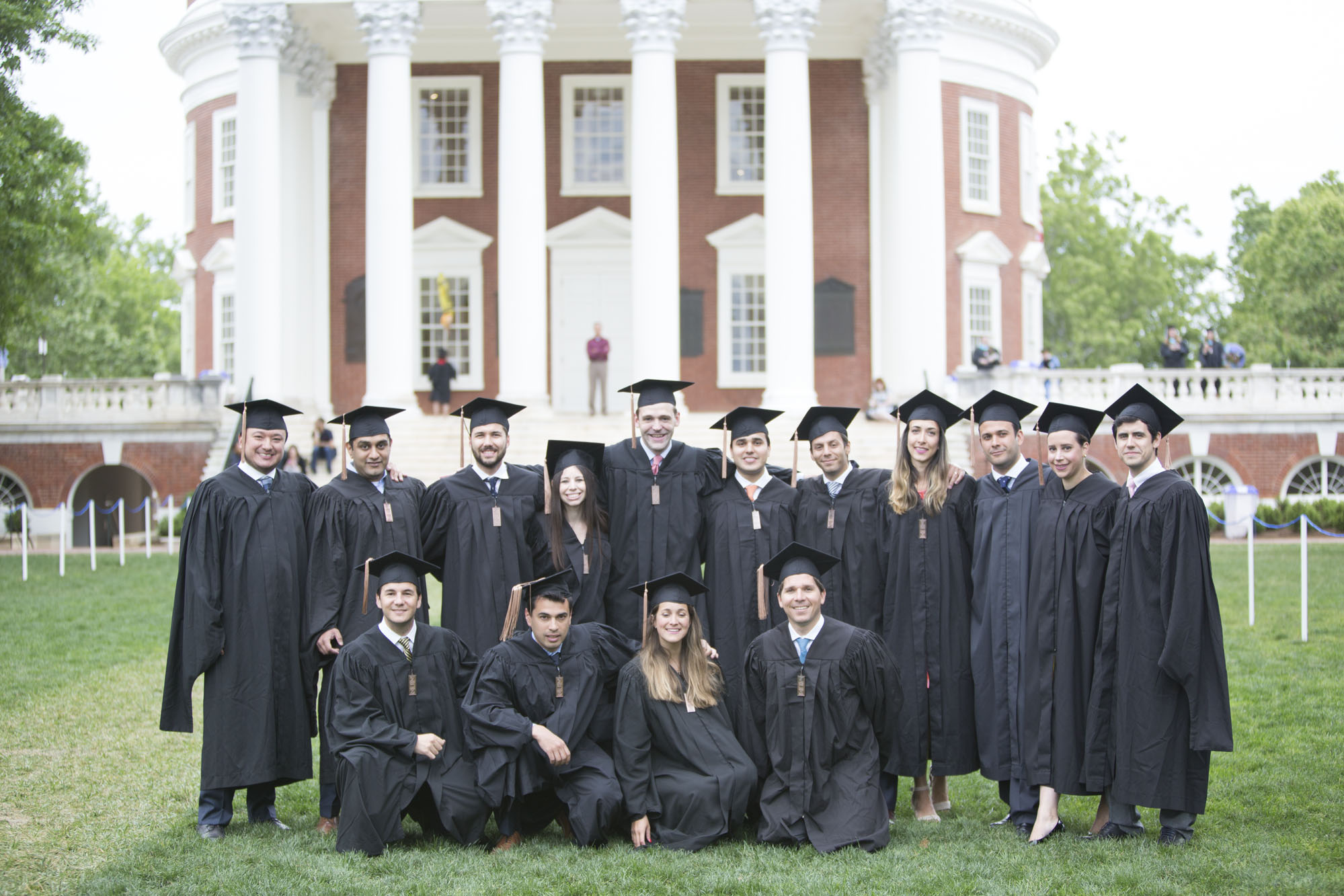 Santos arrived to speak at Valediction on Friday and witness the Sunday graduation of his son, Esteban Santos, from the Frank Batten School of Leadership and Public Policy. Sirleaf came to see her granddaughter, Jenelle Sirleaf, graduate from the Darden School of Business.

“These exercises are the University’s most joyful occasion, when we gather to award degrees and to celebrate the achievements of the graduating class,” Sullivan said.

While she acknowledged the overwhelming sense of joy and pride at the University on Sunday, Sullivan also took a moment to remind the crowd of one graduate who should be sitting among them and was not.

“Otto Warmbier, a fourth-year student in the McIntire School of Commerce, has been imprisoned in North Korea for nearly 17 months,” she said. “During this time, he has not been permitted to communicate with his family or with any representative of the U.S. government. We will continue to hold Otto and his family in our thoughts and prayers and I know those of you who were his classmates miss his presence.”

After opening remarks from the president, the current vice rector and incoming rector of the University’s Board of Visitors, Frank M. “Rusty” Conner III, spoke to graduates about the calling that awaits them all.

“In every walk of life, there is a means to reforming this country,” he said.

Conner then introduced Sunday’s graduation speaker, Robert Pianta, dean of the Curry School of Education. Pianta is the founding director of the Center for Advanced Study of Teaching and Learning, the author of 10 books and has led research and training grants totaling more than $60 million.

In his remarks, Pianta spoke to students about the new professional roles that many of them are about to assume.

“I suspect that the intriguing opportunities that entice us as professionals lie in the land of ambiguity, uncertainty, and risk – mastering this terrain is why professionals are also entrepreneurs and creative,” he said.

He added that just as their years at UVA required more than the mere memorization of facts and figures to get ahead, so too would their professional futures. Pianta urged graduates to think about the bonds they formed with classmates and professors to achieve success and to continue that practice as they leave Grounds.

“So it won’t be whether you know the latest facts – which you get from Google anyway – but rather how you build relationships, enroll stakeholders, establish mutual aims, and act – those skills will set the shape and slope of your professional pathway,” he said.

In closing, he asked all the graduates to also remember their alma mater as the leave Grounds to begin their next chapter and expressed the University’s gratitude to them.

“Thank you for joining us for a time,” he said.

Shortly after Pianta’s speech, graduates from each school rose in turn to have their degrees officially conferred upon them by President Sullivan. In all, 1,480 baccalaureate degrees, 449 first professional degrees and 1,693 graduate degrees were awarded on Sunday. The numbers awarded per school are as follows:

Sullivan closed the ceremony by offering the fondest hopes of the University for each new graduate as they enter the world:

“Godspeed, and best wishes as you go.”

How a Single Email Changed a Life END_OF_DOCUMENT_TOKEN_TO_BE_REPLACED

Fall Is in the Air on Grounds END_OF_DOCUMENT_TOKEN_TO_BE_REPLACED

At UVA, There Is a Club for Everyone END_OF_DOCUMENT_TOKEN_TO_BE_REPLACED