Pipeline: How UVA Is Becoming a Launch Pad for Women in Sports Media 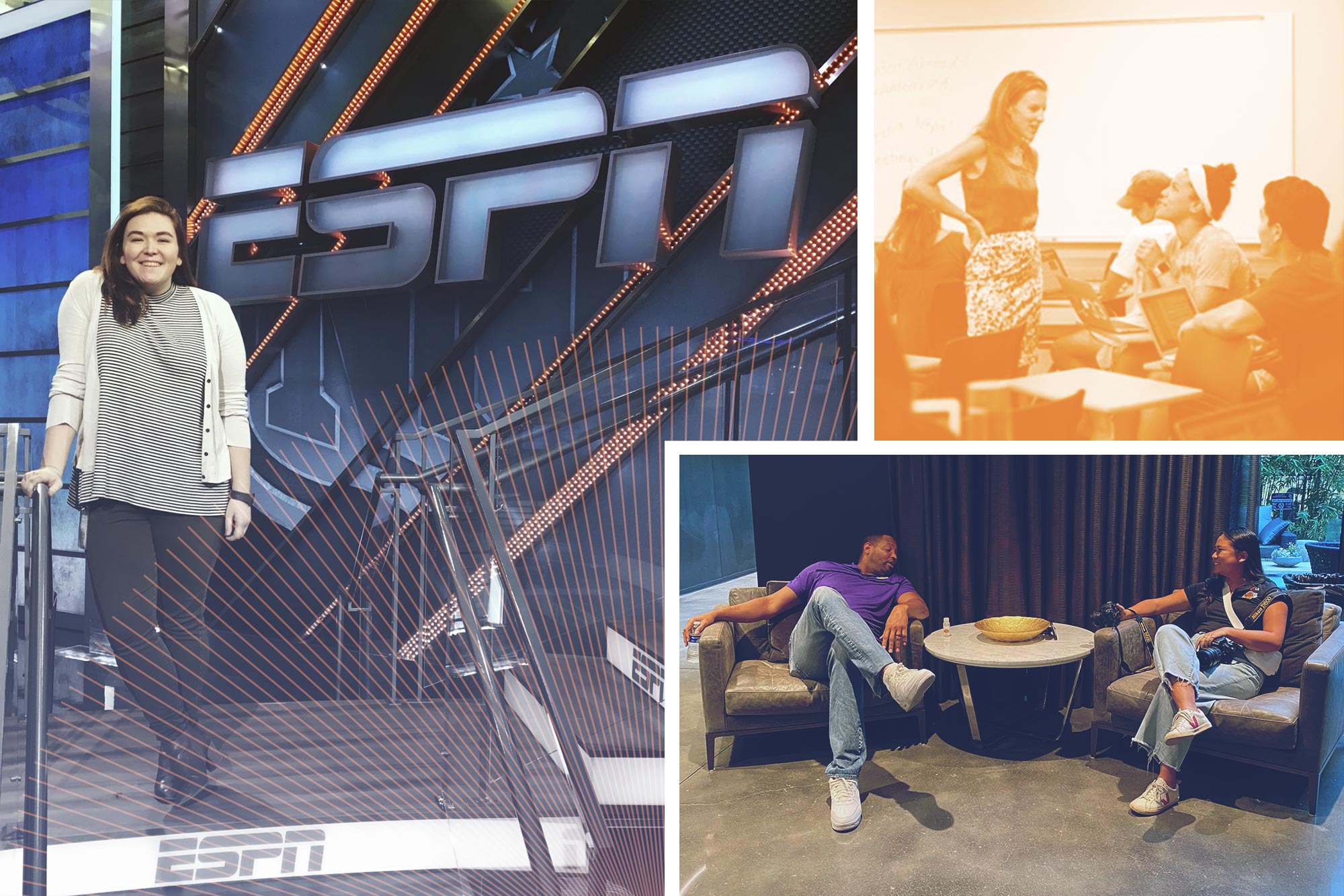 Anna Katherine Clay’s sports media program at UVA has created a network of alumni at high-profile outlets such as ESPN. (Contributed photos)

The email Anna Katherine Clay received over the summer wasn’t just an encouraging progress report regarding one of her students. It was part of a validation six years in the making.

In 2016, Clay, a veteran sports reporter and producer for ESPN, began a new venture as an adjunct professor in the University of Virginia’s media studies department. Familiar with UVA’s reputation for bright students and strong athletics, she saw an opportunity to help grow an academic exploration and interest in the profession she knows best.

Her first course, Sports Journalism, had a roster of 24 students, including Emily Hybl, then a third-year pre-law student.

Flash ahead to August 2022 and Hybl is the producer of a sports show for an ESPN Radio affiliate in Los Angeles, the country’s second-largest media market.

Among her station’s interns this past summer was Khuyen Dinh, a fourth-year student at UVA

As the internship ended, Hybl sent a note to Clay that praised Dinh’s imagination, work ethic and accountability. “If she were graduating,” Hybl said, “we’d all want to hire her.”

Clay’s program, in a way, had come full circle. She had reason to be proud.

“To me,” she said, “it was a great testament that we have formed a collaborative, creative, intellectually-inspired UVA alumni network within the industry at large.”

Clay is now part of UVA’s general faculty as a media studies assistant professor of practice. She’s expanded to offering three courses under the sports media and storytelling umbrella  – Sports Journalism, Sports Media Production, and Athletes, Activism and the Media – and has a growing list of alumni working in the field.

“What I like is that what’s happening at UVA is kind of mirroring the industry at large, in that there are more and more women who are entering sports media,” Clay said. “Even though that number is gradually growing, it is growing – it’s not linear. Progress can be incremental.”

In September 2021, the Institute for Diversity and Ethics in Sport released a report on race and gender among sports media. The study evaluated more than 100 newspapers and websites with the intention of measuring changes in racial and gender hiring practices against a 2018 study of the same practices.

As Clay attests, there’s long been a “boys club” label attached to sports journalism. On the other hand, she’s proof that women can thrive in the industry. Her portfolio (she writes under the byline Anna Katherine Clemmons, her maiden name) – loaded with clips from ESPN the Magazine, The New York Times, The Washington Post, USA Today and other nationally renowned publications  – is inspiring, said Dora Friedman, a third-year student and president of UVA’s Association for Women in Sports Media chapter.

“It makes you realize you can do it,” Friedman said.

While Melissa Stark, a 1995 graduate and sideline reporter for NBC’s “Sunday Night Football,” is UVA’s shining example of a leading woman in sports media, products of Clay’s program are already beginning to make their mark.

Hybl, who’s been in her role with 710 ESPN Radio in LA for 16 months, was on site at SoFi Stadium in February to produce shows around Super Bowl LVI between the Los Angeles Rams and Cincinnati Bengals.

Emily Caron, a senior writer for the sports business digital platform Sportico – and another student in Clay’s first class in fall 2016 – broke college football news last July when she reported that Barstool Sports was taking over as the exclusive title sponsor and broadcast partner of the Arizona Bowl. She was also first to report about basketball star Dennis Rodman’s daughter, Trinity Rodman, becoming the highest-paid player in National Women’s Soccer League history.

Other former Clay students (male and female) working in sports include:

“As a woman who has worked in the field for so long,” Clay said, “I’ve always tried to encourage and empower young women, if they feel so inclined toward that career path.”

Hybl was working as a legal assistant at a local law firm when she took Clay’s course. Law school was perhaps in her future until Clay’s sports journalism presentation gave Hybl second thoughts.

“I was at an inflection point of what I wanted to do in my career,” Hybl said. “A mentor of mine said, ‘Go back to what you wanted to do when you were 10 years old and see what kernel of that you can try to do – and that is what will make you happy in your career long-term.’

Hybl said the desire was further ignited by the fact an experienced female reporter was teaching the course.

“The first few classes, I remember Anna Katherine telling us about her first few times she went into a Major League Baseball locker room and people didn’t want to help her,” Hybl said. “I always thought it was kind of bad-ass of her to go in there and not be afraid of that. She didn’t back down from people who were trying to make her feel uncomfortable.”

While UVA doesn’t have a journalism school, students can practice their reporting skills through outlets such as the Cavalier Daily newspaper or WUVA News. They can receive hands-on live production experience through helping with ACC Network broadcasts.

Caron was writing for the sports section of the Cavalier Daily when she took Clay’s course. Sports reporting at the time was more of a hobby for her than a way toward post-graduation employment. 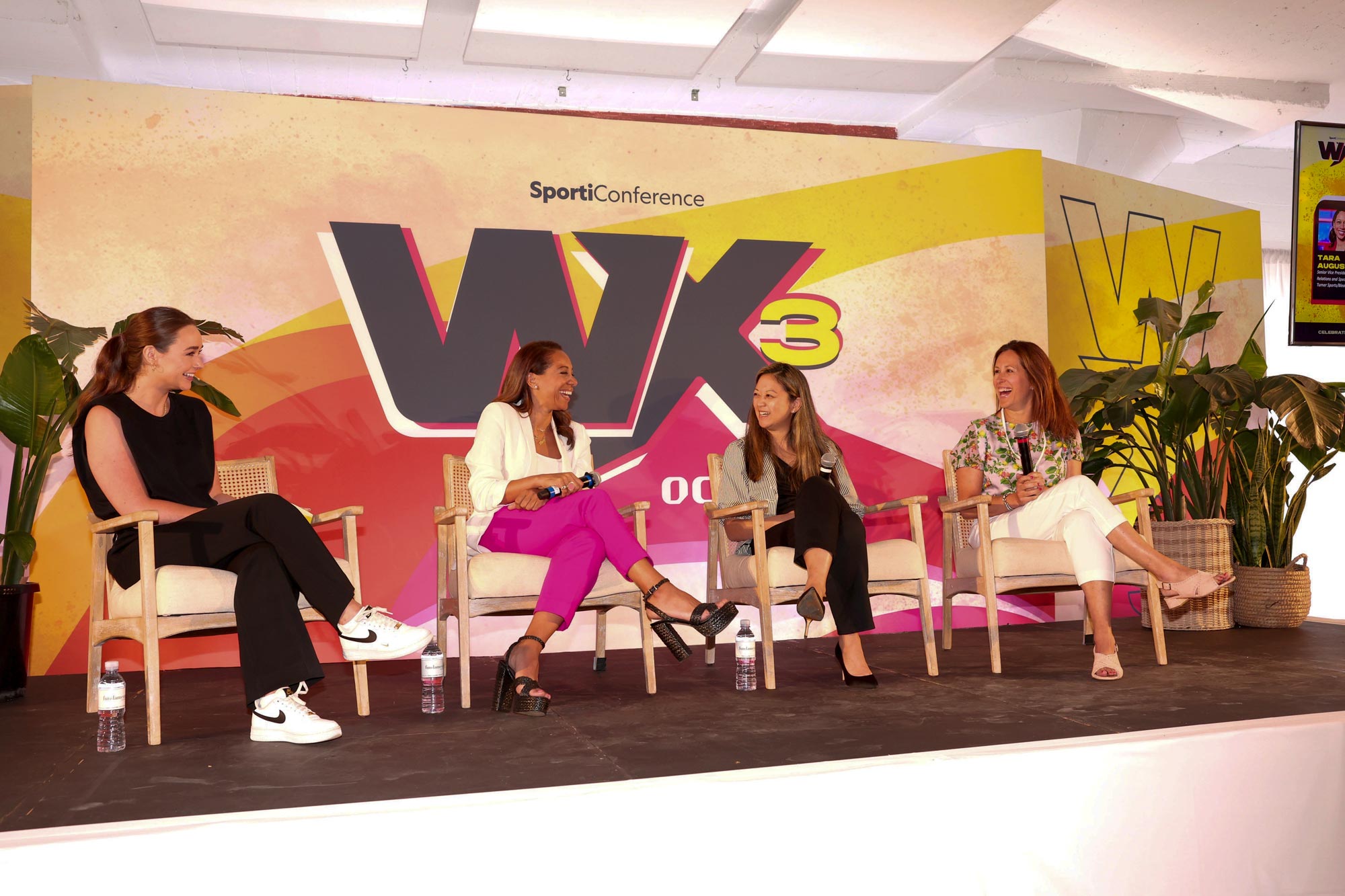 That quickly changed, as not only did Caron buy into Clay’s instruction, but she was intrigued by her star-studded rotation of guest speakers – ESPN’s Wright Thompson and FOX Sports’ Howie Long among them.

“She made the speakers super accessible to us,” Caron said. “And I think it was because of those connections and the advocacy she did on my behalf that I got an internship at ESPN between my third and fourth year.

“That’s when I was like, ‘OK, I think this is probably a career now.’”

Clay, who in August joined Friedman and other UVA students in Denver for the Association for Women in Sports Media convention, knows the power of females supporting each other in this industry. It’s why she remains tight with many of her former students.

“Anna Katherine is a person who understands this experience,” Caron said. “She makes herself available to us. I contacted her a bunch my first couple years out of school when I didn’t know how to do something. And she was always a sounding board for me, which was exceptional. She has made herself an advocate for her students, even after they are no longer her students.”

Said Hybl: “She wants to build community. She’s approachable. She makes herself available not only personally, but professionally. And I think that’s something that other women who take her class have relied on and built ourselves.”

Hybl paid it forward this past summer by assisting Dinh’s internship.

“I think, because we’re not at a university with a journalism school, it can be tough to see where post-grad I could end up, or where my interests may line up in the professional world,” Dinh said. “So, it was really nice to have that support system, to have another Wahoo in the office, to know that there is so much potential, considering the education that Anna Katherine’s provided for us.”

The pipeline is humming.

“I hope this keeps growing,” Clay said. “I love that now I can call on former students who are working in the field to speak to my current students and to offer panels to detail what it’s like working in the industry today – and how you might get there.

"There’s so much value in continuing to build the intellectual curiosity, academic experience and, in some cases, sports media and storytelling career interest of our students at UVA. I’m excited for what we can do next.”