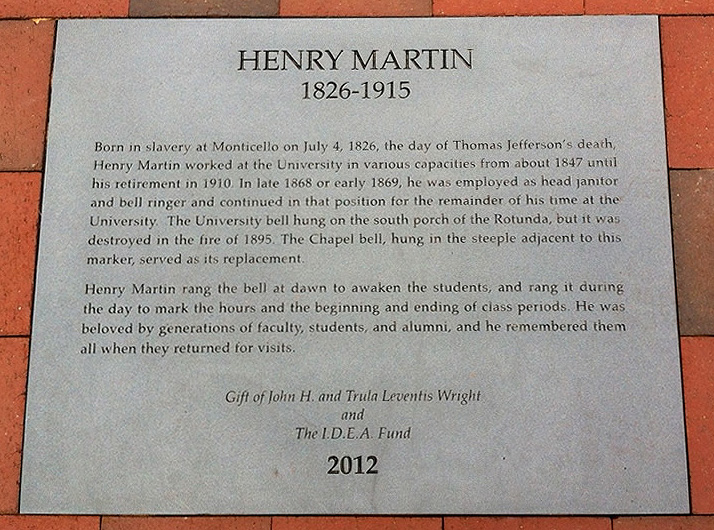 The plaque honoring Henry Martin, who rang the Univesity&amp;#39;s bell every hour, on the hour, for 50 years, lies near the University Chapel -- where today&amp;#39;s bells are automated.

Countless people walk the brick path every day that winds in front of the University Chapel. Now if they pause, they see a plaque installed there that recognizes a fixture of the University of Virginia community in its first century: Henry Martin, the University's bell ringer from 1847 to 1909.

A project installed this summer by Facilities Management staff and the Office of the University Architect, the plaque was sponsored by a new group formed to support diversity efforts at U.Va., the IDEA Fund.

Placed in its permanent spot this July, the plaque reads, in part:

“Henry Martin rang the bell at dawn to awaken the students, and rang it during the day to mark the hours and the beginning and ending of class periods. He was beloved by generations of faculty, students, and alumni, and he remembered them all when they returned for visits.”

The U.Va. IDEA Fund – which stands for “Inclusion, Diversity, Equity and Access” – is an organization, founded in 2010, of alumni and friends dedicated to supporting the University’s overall mission related to those four words and the Office for Diversity and Equity in particular.

Martin has been recognized on Grounds this year in several ways, especially as a focus in U.Va.’s two-week commemoration of Martin Luther King Jr.

“In a real sense, Henry Martin was the hub of the wheel for the University community and for Charlottesville,” said Coy Barefoot, a 1997 alumnus, local radio host and author of “The Corner: A History of Student Life at the University of Virginia.”

Barefoot participated in a January panel discussion on the role of enslaved laborers in the University’s early history. University of Virginia Magazine published an article about Martin, also in January.

Although Martin was born into slavery at Monticello on July 4, 1826 – the day Thomas Jefferson died – and was freed sometime after starting work at U.Va., around 1847. Before the 1895 fire, he rang the bell hourly, starting at dawn, in the Rotunda. Afterward, the bell was relocated to the University Chapel.

When the IDEA Fund Board of Trustees meets on Grounds Oct. 13, its members will walk to the chapel and stop to read and reflect on Henry Martin and his place in the U.Va. community.