‘Praying With Our Feet’: Panel to Reflect on Fighting Racism, From August 2017 to Present 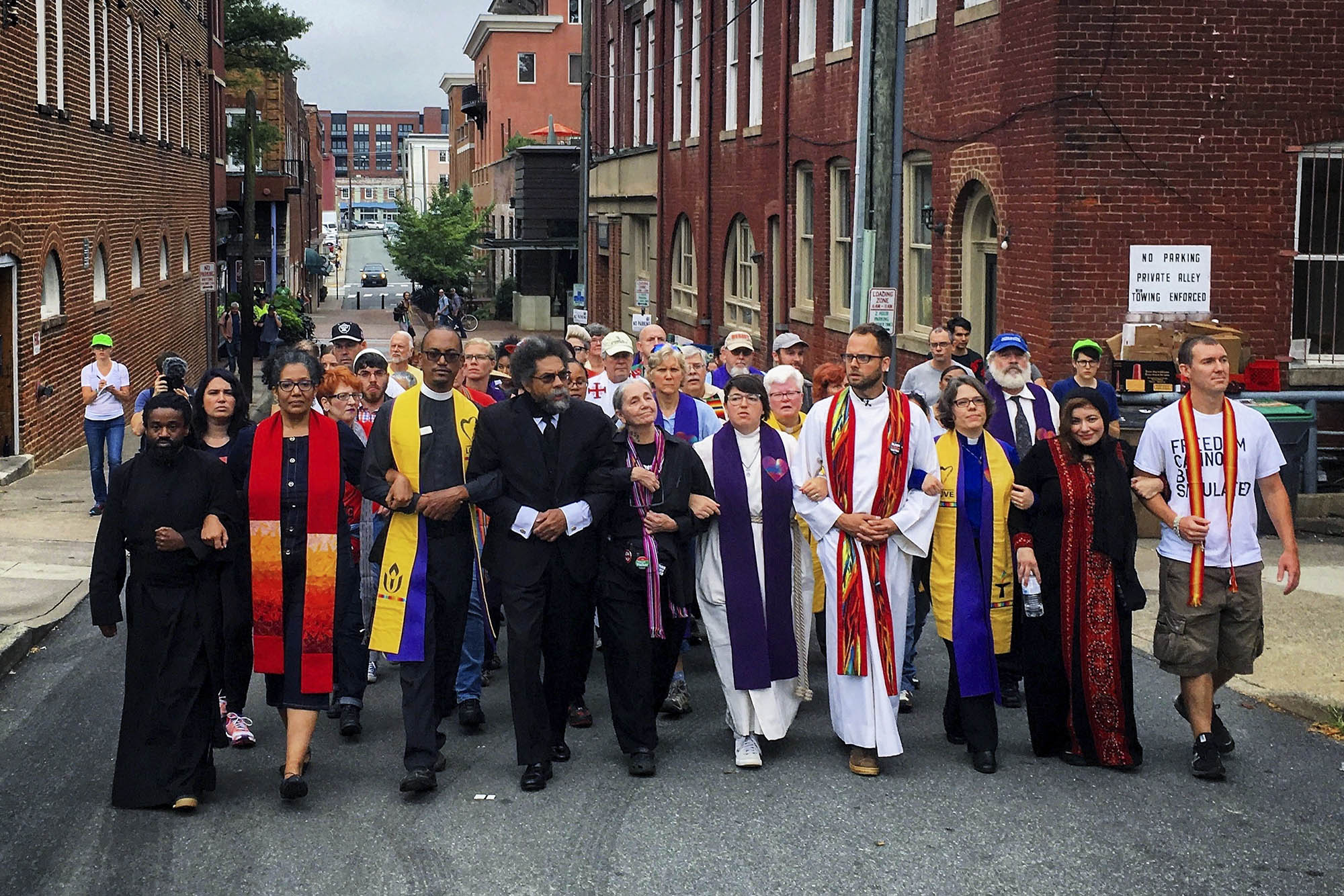 Three years after the violent “Unite the Right” white supremacist rallies at the University of Virginia and in downtown Charlottesville on Aug. 11 and 12, 2017, a panel of religious leaders who are racial justice activists will talk about what inspired them to hold the counter-protest that Saturday and the work that continues during these unprecedented times.

Sponsored by UVA’s Religion, Race & Democracy Lab, the virtual event, “Praying With Our Feet: Religious Activists Remember the Unite the Right Rally in Charlottesville,” will be held Wednesday at 7 p.m.; register here.

In addition to this panel discussion, UVA’s Frank Batten School of Leadership and Public Policy also will host a commemorative event. Batten School Dean Ian Solomon and Dean Risa Goluboff of UVA’s School of Law will discuss “Learning From Tragedy: Lessons of August 2017 and Beyond,” also Wednesday, beginning at noon; register here.

The Religion, Race & Democracy Lab is part of the University’s Democracy Initiative, which was officially founded in 2018, a co-creation of the College and Graduate School of Arts & Sciences, the Miller Center of Public Affairs and the Office of the President. The lab supports teaching, research and public programming and public engagement around those three issues, said Kurtis Schaeffer, also a religious studies professor who co-directs the lab with colleague Martien Halvorson-Taylor.

“Religion and race are two primary means through which we define ourselves, create groups and act in public,” Schaeffer said in a phone call. “Our mission is to contribute to public conversations about the roles of religion and race in politics.

“Political opinions can develop with those two intermingled; for instance, Black churches have been a major driver in the civil rights movement, while white evangelical Christianity was integral to creating and promoting Confederate monuments throughout the South. The intersection of religion, race and democracy therefore merits academic research and investigation.”

Along with supporting student and faculty research, the lab also helps them craft stories about their research through documentary workshops in video and audio.

“We’ve supported 50 undergraduate and graduate students so far,” Schaeffer said. “Prior to the pandemic, students would go out in person, but this summer, it is all being done virtually.”

The Religion, Race & Democracy Lab has supported religious studies professor and antiracist activist Jalane Schmidt’s involvement in monument-removal efforts, for example. “We worked on a podcast episode with her in telling the story of Charlottesville and race and how it relates to the U.S., and are currently producing a sequel to that episode,” Schaeffer said.

Schmidt, who helped plan and took part in “summer of hate” counter-protests, including Aug. 12, will moderate the upcoming “Praying With Our Feet” panel. She said she plans to ask the panelists to reflect on how their experiences on the streets of Charlottesville might serve as a prelude to what has happened nationally with repressive policing of protests and armed far-right elements menacing unarmed civilians.

She herself has been busy taking inquiries from journalists with local, national and international outlets who want to explain to their audiences about the nationwide uprising against police brutality and the removal of statues, which has coincided with the COVID pandemic.

Over the past several years, vigilance has grown among a broader swath of the Charlottesville public, Schmidt said, about policing, community resources and the lack of affordable housing – conditions which have adversely and disproportionately affected Charlottesville’s Black community).

Schmidt plans to also ask the participants, “What did you learn from your experience as a religious community organizer in Charlottesville during the 2017 ‘summer of hate’ that you have taken with you into your current activism work? How has this affected your own religious life and leadership in religious communities?”

Schmidt said she and other local activists intensified their work after 2017, successfully advocating for a Police Civilian Review Board, insisting for more transparency about police budgets, and focusing on housing issues.

The pandemic has slowed some efforts – such as the community engagement process for envisioning a monument for the slave auction block in Charlottesville – because of the lack of face-to-face meetings. Other initiatives, such as planning and presenting teacher professional development seminars on local African American history in public schools, went online to Zoom.

The other panelists in the “Praying With Our Feet” event include:

• Don Gathers, a deacon at First Baptist Church on West Main Street – the oldest Black church in town, founded by former slaves – and a founding member of the Charlottesville Black Lives Matter and the Police Civilian Review Board, who served as co-chair of the 2016 Blue Ribbon Commission on Race, Memorials and Public Spaces. (The commission made recommendations to the city about the placement of its Confederate statues.)

• Rachel Schmelkin, associate rabbi for Charlottesville’s Congregation Beth Israel from 2016 to 2020, who received T’ruah’s “Action Under Fire Award” for her work during the 2017 rallies.

• Religious studies alumna Grace Aheron, currently communications director of the international antiracist group Showing Up for Racial Justice, or SURJ, who was an organizer with the local SURJ chapter in 2017.

On Aug. 5, the Religion, Race & Democracy Lab featured Schmidt leading a virtual tour of the “Johnny Reb” Confederate soldier monument in front of the Albemarle County Courthouse and talking about the role it has played in local and national narratives about religion, race and democracy. The next day, the Albemarle County Board of Supervisors voted unanimously to remove the 111-year-old statue.

Schaeffer said, “We see the work of the lab as central to the humanities. It shows how the humanities can be used directly in public life and for the public good.”

Do You Know the History of Your Favorite Corner Spots? END_OF_DOCUMENT_TOKEN_TO_BE_REPLACED

Netflix to Add Ads. Why This Could Be a ‘Game-Changer’ for Your Viewing Experience END_OF_DOCUMENT_TOKEN_TO_BE_REPLACED

What’s Next for UVA’s Class of 2022? END_OF_DOCUMENT_TOKEN_TO_BE_REPLACED