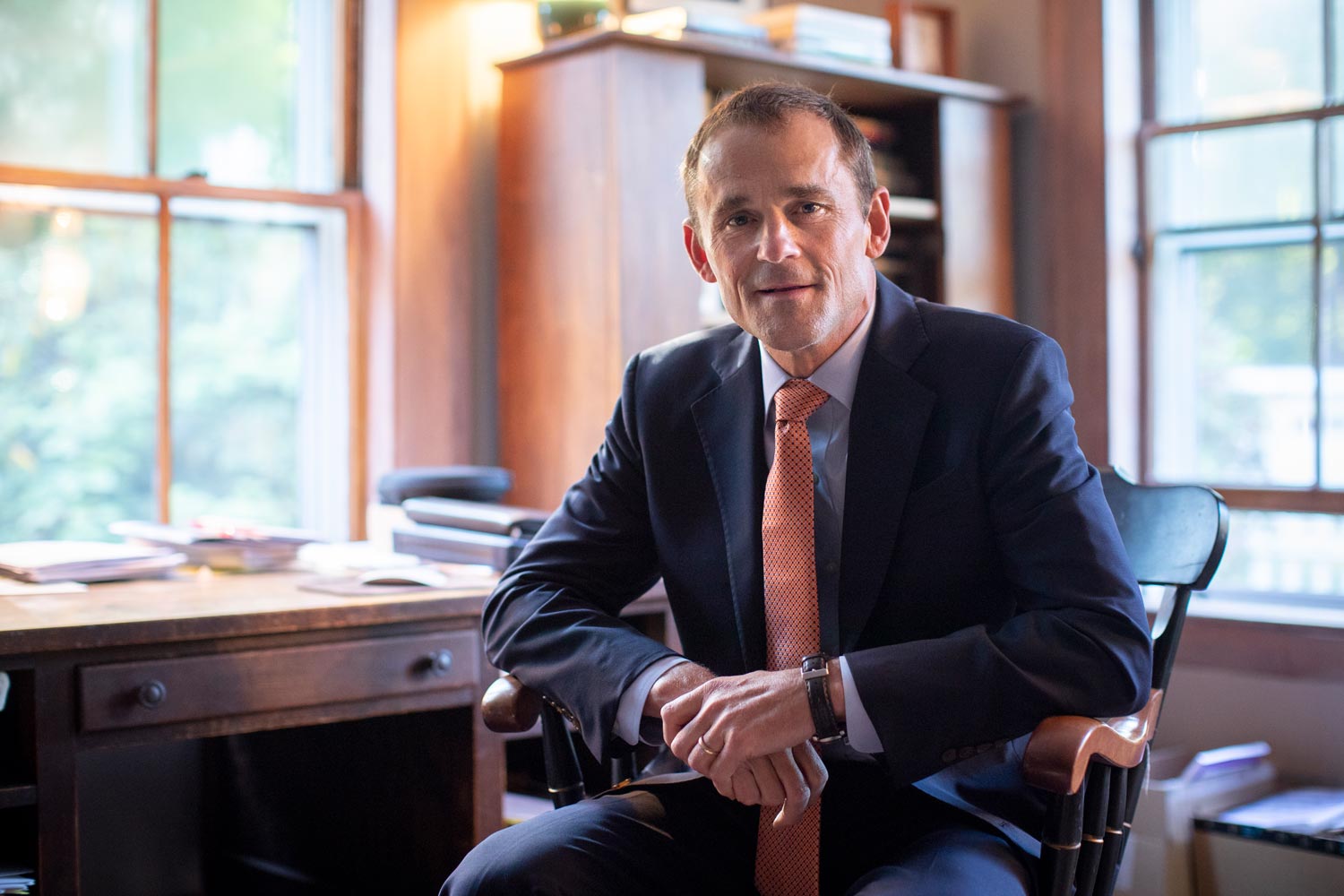 With just a month to go before his term begins, President-elect James E. Ryan expressed growing anticipation for his tenure as the University of Virginia’s ninth president.

“Each time I visit Grounds, I learn something new and get more excited about the opportunity ahead,” he said during a recent interview with UVA Today. “The UVA community has been incredibly welcoming, and I’m eager to tap into that passion to help set some early priorities and get to work.”

The Board of Visitors selected Ryan in September to succeed President Teresa A. Sullivan, the University’s eighth president, whose term concludes July 31 after eight years in office.

Since the announcement of his appointment, Ryan has visited Grounds regularly as he neared completion of his term as dean of the Harvard Graduate School of Education. He was here most recently during the June Board of Visitors meeting, and now plans a break to spend time with his family between the conclusion of his deanship and the start of his presidency on Aug. 1.

“I can’t wait to begin,” he said. “My successor as dean at Harvard has been named. So the fact that the school I am leaving is going to be in good hands has enabled me to think about this next chapter at UVA with even more excitement and anticipation.”

When on Grounds, Ryan has focused on listening. In advance of meeting with individual deans and other school and University leaders, Ryan asked those leaders to set the agenda for their time with him and bring forward the key elements they thought the president-elect should hear and learn about. The result, he said, was illuminating.

“Whether it involved research, classroom instruction, administration, the Medical Center – or any number of other issues – I have tried to absorb as much information as I can in a short period of time,” he said. “This is an ongoing process of discovery, and I have a lot to learn.”

He has met with student leaders and recipients of the Ridley Scholarship, attended the Bicentennial Launch Celebration, scheduled briefings on major capital projects and delved into the budgeting process for the University and the Medical Center. Ryan has accompanied Sullivan to meet state legislative leaders in Richmond and elected officials in Washington. He also spent a day at UVA’s College at Wise.

“I’m grateful to President Sullivan and the executive leadership team for providing important connections and so much context about today’s UVA, all of which will help me hit the ground running,” he said.

During his visits to Grounds, he also has mixed some extracurricular activities in among official meetings with deans, vice presidents and others. In March, Ryan ran in the Charlottesville 10-Miler road race and also discussed his book, “Wait, What? And Life’s Other Essential Questions,” during a featured session of the Virginia Festival of the Book.

Ryan is no stranger to either event. Prior to his Harvard appointment, Ryan spent 15 years as a faculty member at the UVA School of Law, where he also earned his law degree in 1992.

In advance of his arrival, Ryan also took steps to begin assembling his leadership team. In a message to the University community, Ryan announced search committees responsible for identifying candidates for the positions of executive vice president and provost, and executive vice president and chief operating officer. Current Provost Tom Katsouleas agreed to stay in his position until a new provost is on board, while current COO Patrick Hogan agreed to stay in his role until a successor is on Grounds, and to serve in a consulting role during that transition.

Ryan also announced the appointment of John Jeffries as senior vice president for advancement for a three-year term beginning Aug. 1. Jeffries is an alumnus of UVA, faculty member and former dean of the School of Law. At its June meeting, the Board of Visitors announced that the public phase of the University’s next fundraising campaign will begin in fall of 2019 and have a target of $5 billion, making it the most ambitious campaign in UVA history.

With his start date rapidly approaching, Ryan said he has been thinking about his goals and how he will spend his time in the earliest days of his administration. But he’s also looking forward to welcoming students on Grounds in mid-August – including the initial cohort of first-year students during his presidency – and attending the football team’s Sept. 1 opening game.

Ryan also said he plans during his first days in office to identify some early themes that have repeatedly come up in his conversations and visits to Grounds, and to invite students, faculty, staff, alumni and supporters of the University to share their opinions on how UVA can best pursue its mission as a public institution into its third century.

“What happens from here on out depends on all of us,” he said. “It will take all of us, working together, to build on the great strengths of this university.”

For All of Us END_OF_DOCUMENT_TOKEN_TO_BE_REPLACED