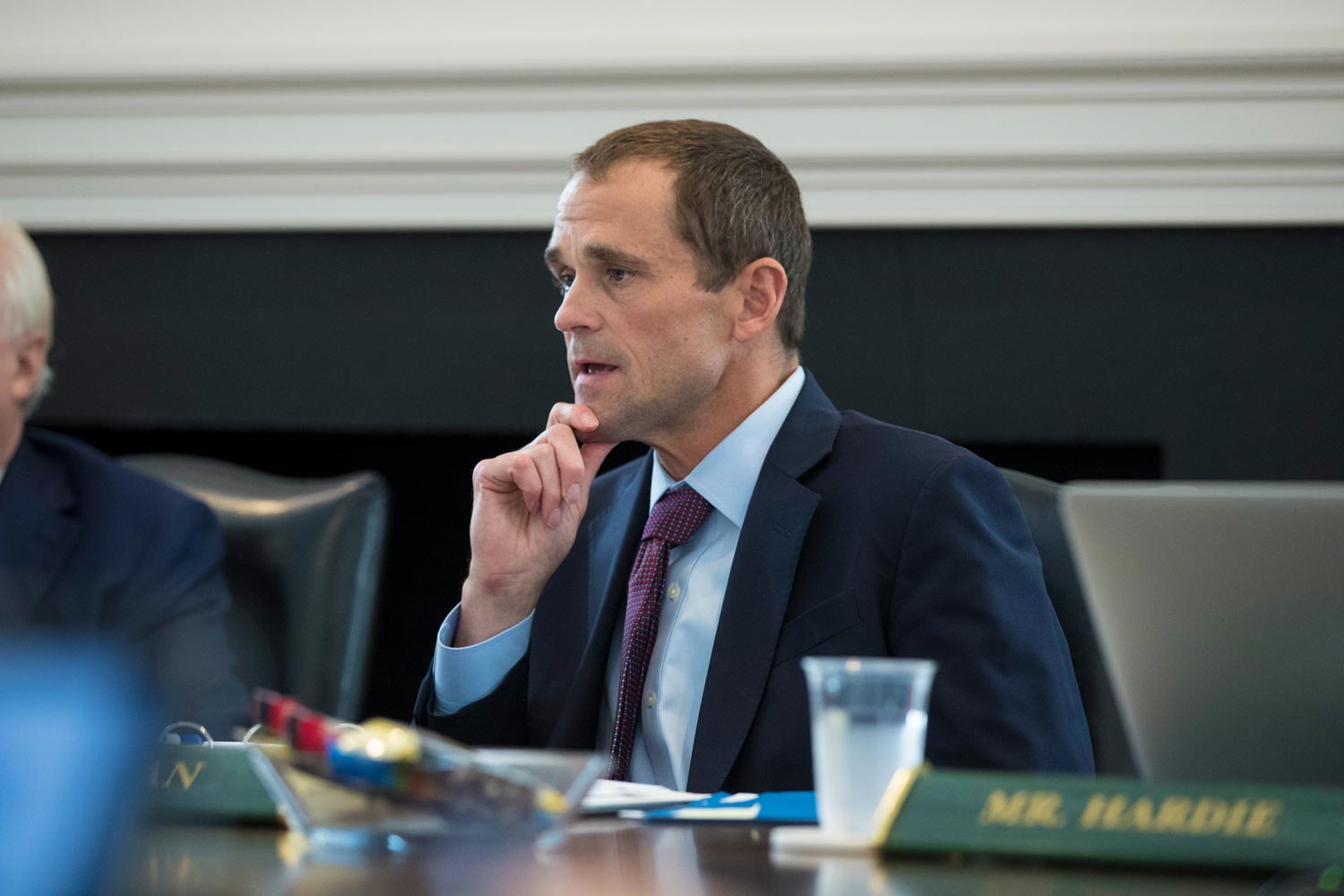 President Jim Ryan addressed the University of Virginia’s Board of Visitors Wednesday afternoon, outlining some of his key priorities for his first year as president.

He divided those priorities into three categories: planning and execution; leadership and governance; and culture. Among the earliest Ryan will focus on is developing a strategic plan for the University, which he hopes to have concretely laid out by the end of this academic year.

“My first priority, and in some respects the most important, is to articulate a vision for the future of the University and develop a strategic plan,” said Ryan, who began his term as UVA’s ninth president on Aug. 1.

He has already begun that work through conversations with groups around the University and the public Ours to Shape campaign, which encourages members of the UVA community and the public to share their thoughts, both online and in-person, around key themes of community, discovery and service. A committee – led by Darden School of Business professor Michael Lenox and Margot Rogers, who started work yesterday as a special advisor to the president for strategic initiatives – will consider that information and advise the president as he shapes his strategic plan.

“I think we are doing a good job. I also think there are opportunities to do even more,” he said. “I want to consider how we can further simplify the financial aid process for students and establish some bold goals about what we want to achieve with financial aid in the future.”

He expressed particular interest in helping students who are the first in their families to attend college.

Addressing plans for expansion or redevelopment, Ryan called the board’s attention to a few specific initiatives already underway, including the University’s partnership with the Inova Health System in Northern Virginia, which will be an important center for medicine, research and academic work, and UVA’s long-term plan for the Emmet/Ivy corridor. Ryan recently announced a task force studying potential uses for the corridor, a 14.5-acre parcel of land near Grounds that the University plans to redevelop.

“This is one of the most remarkable opportunities the University has right now, and something that could shape its future for decades to come,” he said.

Ryan concluded his remarks with his vision for building an ever-stronger culture of collaboration, both between members of the University community and between UVA, the Charlottesville community and surrounding areas.

“There is already a lot of collaboration and tremendous interest in interdisciplinary work around Grounds,” Ryan said. “However, there are also still obstacles, and I want to focus on the best ways to lower those obstacles and not just allow, but encourage faculty to work across disciplinary lines and across schools.”

As one example, he cited the newly-announced Democracy Initiative, a research and teaching initiative led by the College and Graduate School of Arts and Sciences and the Miller Center of Public Affairs to study opportunities and challenges facing democracies around the world.

Reaching out to the broader community, Ryan hopes to emphasize partnership and service.

“I think the relationship between UVA and the surrounding community can be stronger than it is, and I think it is very important,” Ryan said. “Being a good neighbor is the right thing to do; we are interdependent and rely on each other. What happens at the University matters to the local community, and what happens in Charlottesville and the surrounding area matters to the University.”

His initial ideas, Ryan told the board, include gathering a group of advisors including both UVA and community leaders, establishing a survey to give members of the local community more opportunities to share their key priorities, and further strengthening and developing public service programs, already a key priority at the University.

“I hope to get a sense of what matters most to community members, including our employees … and start having conversations about how we can match our strengths to those acute needs,” Ryan said.

Closing his remarks, the president said he hoped to “engender a sense of trust and confidence in the administration and a sense of optimism toward the University,” by being visible and engaged, demonstrating knowledge and competence and simply getting to know the many different people that make up the UVA community.

“I am thrilled to be living in Pavilion VIII, because I am really in the thick of things,” he said. “When I walk out my door, I immediately see groups of students and faculty. Even those small interactions and conversations mean a lot, and I have already learned a great deal just walking to and from work.”

In addition to Ryan’s remarks, the board considered and approved a number of resolutions regarding various building and development initiatives around Grounds, allocations from the Strategic Investment Fund and other priorities.

The board meeting, originally scheduled for Wednesday through Friday, was compressed into one day to avoid disruptions from Hurricane Florence, projected to bring heavy rainfall and high winds to Virginia, North Carolina and South Carolina late this week and this weekend.

What Is the ‘4th Side’? END_OF_DOCUMENT_TOKEN_TO_BE_REPLACED