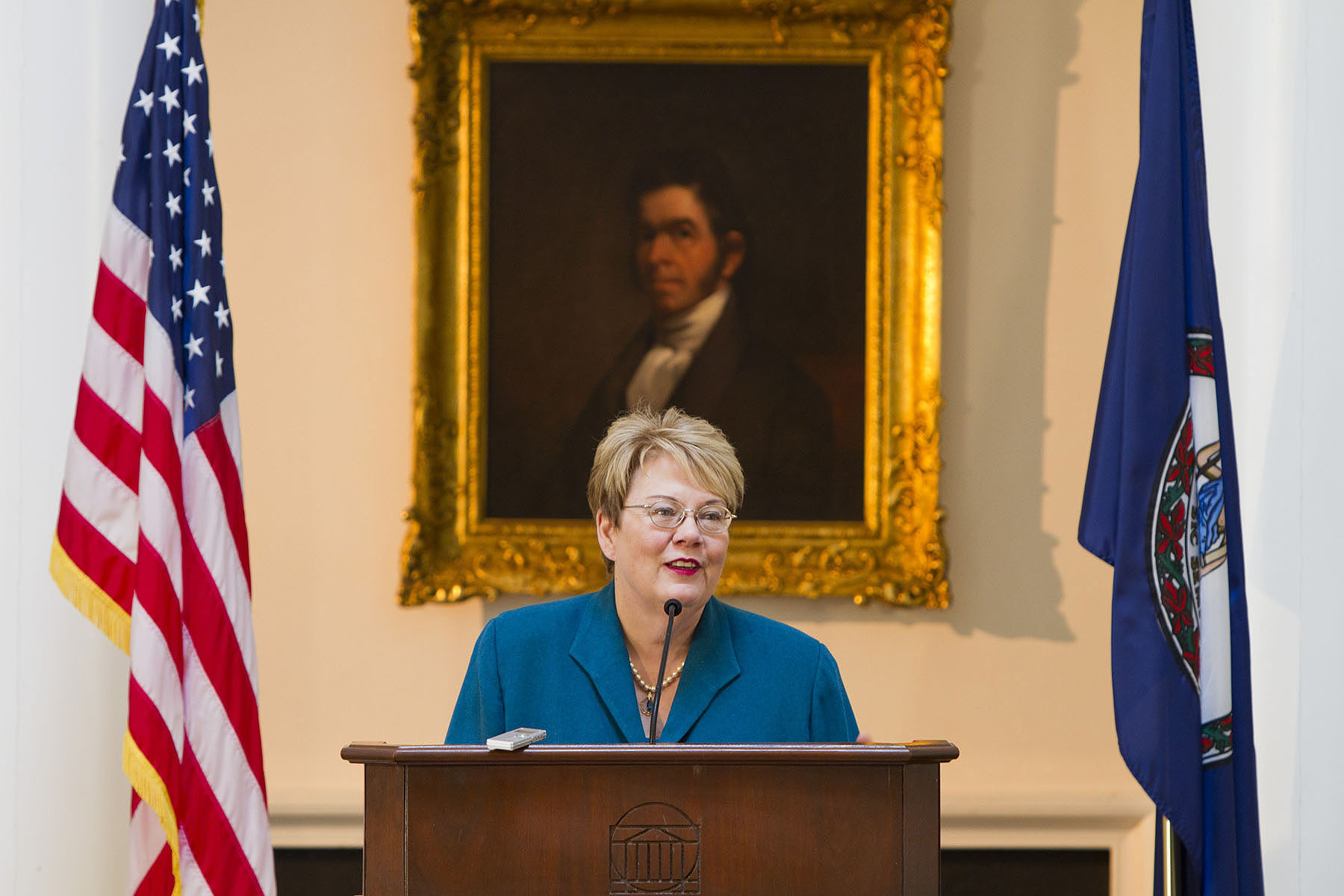 August 24, 2011 — University of Virginia President Teresa A. Sullivan, who earlier this month wrapped up her first year in office, has her sights set on the next 12 months, and beyond. At a media briefing Wednesday in the Dome Room of the Rotunda – also attended by many deans and administrators – she introduced the team that will help her lead the way.

They have plenty of work on their plates.

Simon and Strine will lead an initiative creating a new internal financial model for the University, which, Sullivan said, "will give us greater transparency, predictability and flexibility, while empowering the individual academic units to be entrepreneurial and cost-efficient."

Asked by a reporter how such a model would help the University, Simon laughed and said, "I guess the honeymoon is over."

While he said he couldn't comment yet on U.Va., he had worked for 12 years in Duke's responsibility-centered management system. "I've watched humanities come together and form institutes that launch fellow programs because the incentive structure allows that happen," he said. "I've watched new degree programs get formed. Duke launched its first master's in fine arts. It was structured in a way that the faculty didn't have to worry about how they were going to finance and make it successful."

Strine added, "The point is to get money aligned with the mission. It's not to create winners and losers, or to have the arts pitted against humanities. It aligns the academic capital of this institution with resources, so it's coordinated planning that pursues the research, teaching and patient care that we do together."

Another University priority will be efficiency and cost reduction, Sullivan said. Much has already been done in this area, including streamlining processes, conserving energy and creating shared services. "This year we will comb through the University once again to look for additional savings opportunities," she said.

Layoffs are not part of the picture, Sullivan and Strine said. Sullivan said budget constraints have caused staff to be reduced, but only through attrition. Looking ahead, Strine said, as the Health System grows its patient volume, University research expands and student enrollment increases, "We won't be thinking about layoffs, we'll be thinking about growth and improving quality.  Often that comes with adding people."

Academics are a key focus, with strategies that align with Gov. Robert F. McDonnell's Commission on Higher Education, of which Sullivan is a member. Initiatives will include increasing students in the science, technology, engineering and mathematics disciplines – the so-called STEM fields – and developing a "3+1 program" in which students with advanced placement credits could earn bachelor's and master's degrees in four years.

At the same time, she said, the General Assembly must recognize that enrolling more students – particularly more STEM students – will require additional faculty members and lab facilities. The General Assembly rejected a U.Va. request to fund faculty start-up expenses, but Sullivan said she's not giving up. "In the meantime, we are developing an alternative plan," she said.

New faculty hires also will be needed to replace the large number of faculty expected to retire in the next 10 years, she said. "This is becoming especially important as we begin a period of enrollment growth," Sullivan said, noting that the College of Arts & Sciences may conduct more than 200 faculty searches in the next five to seven years.

Philanthropy continues to be an important focus for the University, the president said as she announced several fundraising results for the fiscal year ending June 30. Reunion giving totaled almost $47 million, from 5,500 donors; overall giving by alumni, parents and friends was up $27 million over the previous year; and more than 1,700 staff and faculty members gave $2.8 million.

The University's $3 billion campaign stood at $2.4 billion at the end of July, she said. Asked where the money is going, Sullivan said, "It goes where the donor wants it to go. We respect those wishes and we steward the money carefully."

Students were also a focus of the president's remarks. "Students are the lifeblood of every university," she said. "We are excited to welcome our students back this week as classes begin.

"It was a little odd to welcome them to the opening day of classes with an earthquake, but they handled that well."

A student journalist asked Simon about what students can expect during his tenure. Recalling the Academical Village model of students and faculty living and learning side-by-side, Simon said U.Va. is in a unique position to rethink the student-faculty relationship, "how we work together to create new knowledge and how you learn."

"How do we use the tools available today to still focus on the student-faculty relationship?" he asked. "It's the human relationships that are important to me."

Sullivan said a revised sexual misconduct policy has gone into effect, which aims to provide the best care and support for victims while being mindful of due process and privacy rights of the accused. Susan Davis, associate vice president for student affairs, explained that the new policy adheres to U.S. Department of Education requirements by including sexual harassment, cyberstalking, voyeurism and other behaviors as categories of offense, and by making the standard of adjudication "preponderance of evidence" rather than "clear and convincing evidence." A single, web-based portal, Davis said, makes help more accessible to students.

A Year We Will Never Forget: 2019-20 in Review END_OF_DOCUMENT_TOKEN_TO_BE_REPLACED

‘What Will You Carry With You?’ Remarks From UVA President Jim Ryan END_OF_DOCUMENT_TOKEN_TO_BE_REPLACED