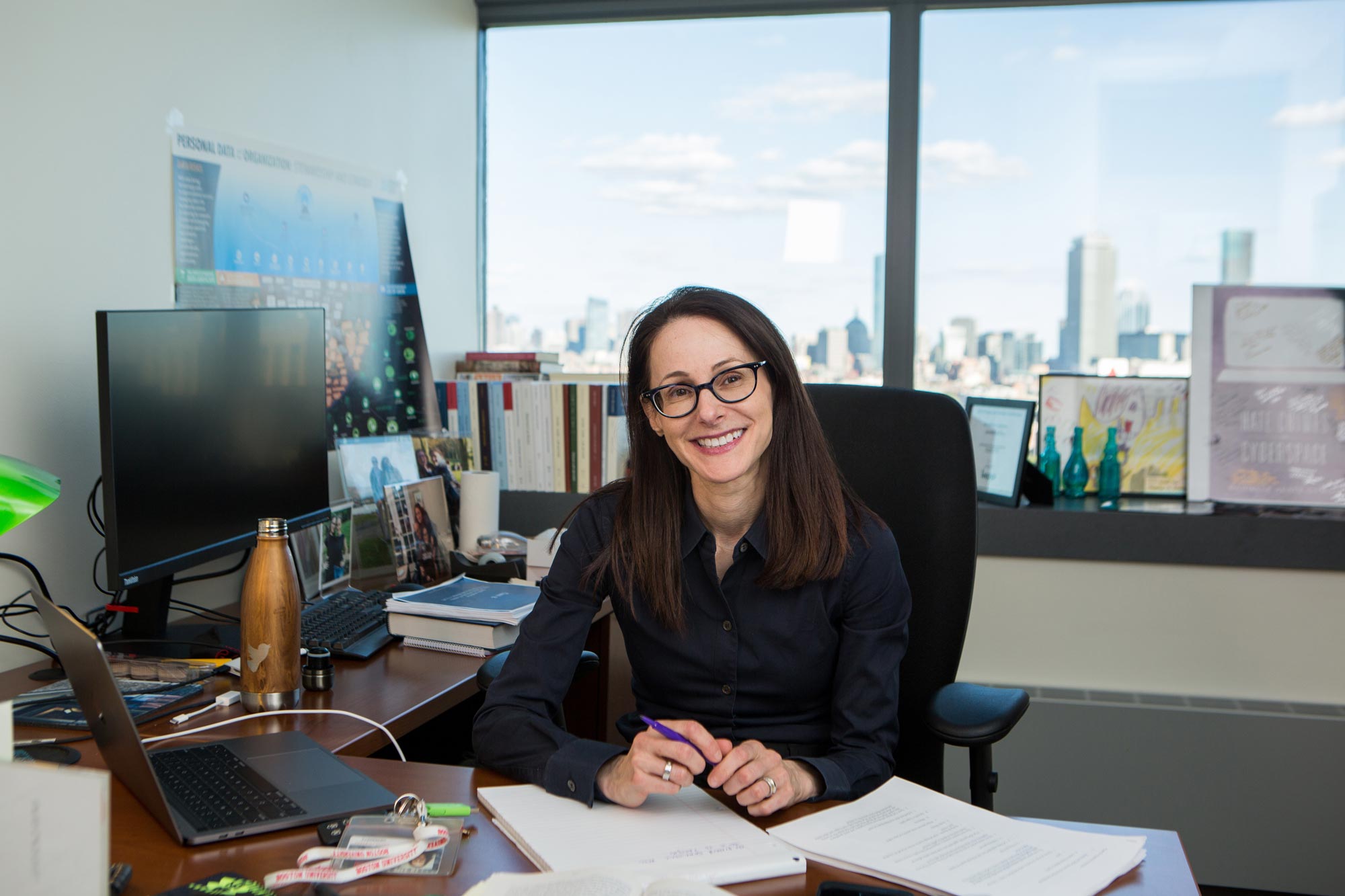 Danielle Citron’s new book project has the working title “The End of Privacy: How Intimacy Became Data and How to Stop It.” (Photo courtesy of the MacArthur Foundation)

Danielle Citron, a pioneering law professor in the area of digital privacy who helped now-Vice President Kamala Harris in her effort to combat nonconsensual pornography, is joining the University of Virginia School of Law’s faculty in December.

Citron is the inaugural Jefferson Scholars Foundation Schenck Distinguished Professor in Law. She comes to UVA from the Boston University School of Law.

“The work that Professor Citron is doing on digital privacy has been truly groundbreaking. It is no exaggeration to say that she has built a field,” UVA School of Law Dean Risa Goluboff said. “We are so fortunate to have her join the Law School and UVA. She is the model of the engaged scholar. She is dedicated not only to teaching and the generation of new knowledge, but also to shaping the public discussion and making an impact on the law and larger society.”

Citron’s professorship is funded by the Jefferson Scholars Foundation, whose stated mission is “to benefit the University of Virginia by identifying, attracting and nurturing individuals of extraordinary intellectual range and depth who possess the highest concomitant qualities of leadership, scholarship and citizenship.”

Citron was a recipient of a 2019 MacArthur Foundation Fellowship, informally known as a “genius grant,” for her work on cyberstalking and intimate privacy, including her efforts to change how the public thinks about online harassment, from a triviality to a civil rights problem. Because women and minority groups are often targeted online, she has made the argument that civil rights law – which can address harms not covered by other laws – could be applied in many cases and would serve “a crucial expressive role.”

“Law would teach us that cyberstalking deprives women and marginalized communities of crucial opportunities to work, speak and go to school,” she said. “Regrettably, the United States is as bad as some of the worst countries.”

Harvard law professor Jonathan Zittrain hailed the book as a “call to action and a thought-provoking roadmap.” University of Chicago law professor Martha Nussbaum said it is a “lucid summary” that shows “we can do quite a lot for victims of cyberabuse without chilling expression.”

Cosmopolitan magazine named the book one of the “20 Best Moments for Women” that year.

Through staffers, the book also got the attention of then-California Attorney General Kamala Harris. One of the members of Harris’ executive team reached out to Citron. “Our team has read your book. Will you come talk to us?” she asked.

Citron ended up advising Harris and her team for two years, and during a portion of that time, served on the Attorney General’s Cyber Exploitation Task Force.

The task force “had a series of meetings, and the first was in-person with 50 companies, like everyone in Silicon Valley,” Citron said. “A lot of them didn’t necessarily want to be there, but they came – Google, YouTube, Facebook, Twitter, Pinterest, you name it.”

In direct and indirect ways, the tech giants were enabling nonconsensual pornography, she said. However, because of Section 230 of the federal Communications Decency Act of 1996, which was the first major attempt by Congress to regulate internet pornography, Harris’ office couldn’t pursue action against the tech companies for serving as intermediaries. Courts have interpreted the section as meaning operators of internet services cannot be held liable for what third parties post.

“At the meeting, it was clear that YouTube and Google were very resistant,” Citron said.

But celebrities added pressure to the cause: “It was just after the leaking of all of those female celebrities’ nude photos from the iCloud hack – Jennifer Lawrence, Gabrielle Union – those prominent women were up in arms about nonconsensual pornography.”

Lawrence asserted in an interview with Vanity Fair that nonconsensual pornography is “a sex crime.”

“It was incredible,” Citron said. “We had that at our backs, and then [Harris] saying, ‘Please work on this.’ Section 230 prevented her from doing much about it, other than to try to go after perpetrators that had hidden themselves pretty well, and there were thousands and thousands of them.”

“I almost fell over in my chair,” Citron said of receiving the news from a USA Today tech reporter. “That’s what victims wanted. They don’t want this content in searches of their name, because it’s impossible to keep a job, have a job and have a life, right?

“So, I credit the AG, now our vice president, with changing the landscape entirely,” she said.

In 2016, Citron published an article, “The Privacy Policymaking of State Attorneys General,” in the Notre Dame Law Review. While the work was the product of an already-planned research sabbatical, she said, the coincidence of having been invited to assist Harris informed the piece.

She is currently working with U.S. Senate and House staff members on proposed amendments to Section 230, as well as a bill to criminalize digital forgeries – notably those “deepfake” videos that, for example, might make it appear through digital manipulation that someone participated in a pornographic video who did not.

Last year, Citron testified before Congress on both issues.

In the political realm, she said, the U.S. “dodged a bullet” in the recent presidential election; deepfakes featuring misleading information about political candidates didn’t materialize in a significant way. The future may be different, however, she warned. Her TED talk, “How Deepfakes Undermine Truth and Democracy,” has been viewed more than 1.9 million times.

Citron has also published dozens of articles related to online privacy and the automation of government decision-making, and has been featured in hundreds more stories for print and broadcast. Her professional awards include recognition from the International Association of Privacy Professionals, as well as from the privacy think tank Future of Privacy.

Her new book project has the working title of “The End of Privacy: How Intimacy Became Data and How to Stop It.” At the heart of the book, she said, will be a focus on her theory of intimate privacy – “our ability to manage who has access to and information about our bodies, close relationships, sexual health, gender and sexuality, on and offline.”

She wants intimate privacy to be understood as a basic human right.

This year, she received a $75,000 grant from the Knight Foundation to co-lead a study looking for positive impacts of intimate privacy laws on victims.

Citron is an affiliate scholar at the Stanford University Center on Internet and Society, the Yale University Information Society Project and New York University’s Policing Project. She is a member of Axon’s advisory board on artificial intelligence ethics. As a member of the American Law Institute, she serves as an adviser to the publication “Restatement Third, Information Privacy Principles Project and Restatement (Third) Torts: Defamation and Privacy.”

Before turning to academia, she was an associate at Willkie Farr & Gallagher, where she helped the firm draft an updated sexual harassment policy. A graduate of Fordham University School of Law, she clerked at the U.S. District Court for the Southern District of New York for two years after graduation.

UVA Law professor Deborah Hellman, who has known Citron since both were law professors at the University of Maryland, said Citron will fit well in UVA Law’s highly collaborative environment.

“She’s such a great colleague – generous with her time, always willing to read drafts and super helpful as a critic and editor, interesting to talk with, engaged and fun,” Hellman said.

Citron said she looks forward to her office being near Hellman’s, as well as the conversations she hopes to have with her and other luminaries on the faculty.

She also can’t wait to meet her new students and teaching assistants, she said. She won the top teaching award her first year at the University of Maryland, in 2005, and proudly includes her student evaluation numbers on her curriculum vitae. As in years past, she expects to teach civil procedure and a seminar on digital privacy. Her most recent seminar featured guest appearances, via Zoom, from all of the authors whose books students read for the course.

“I love my students,” Citron said. “Teaching is a part of who I am.”