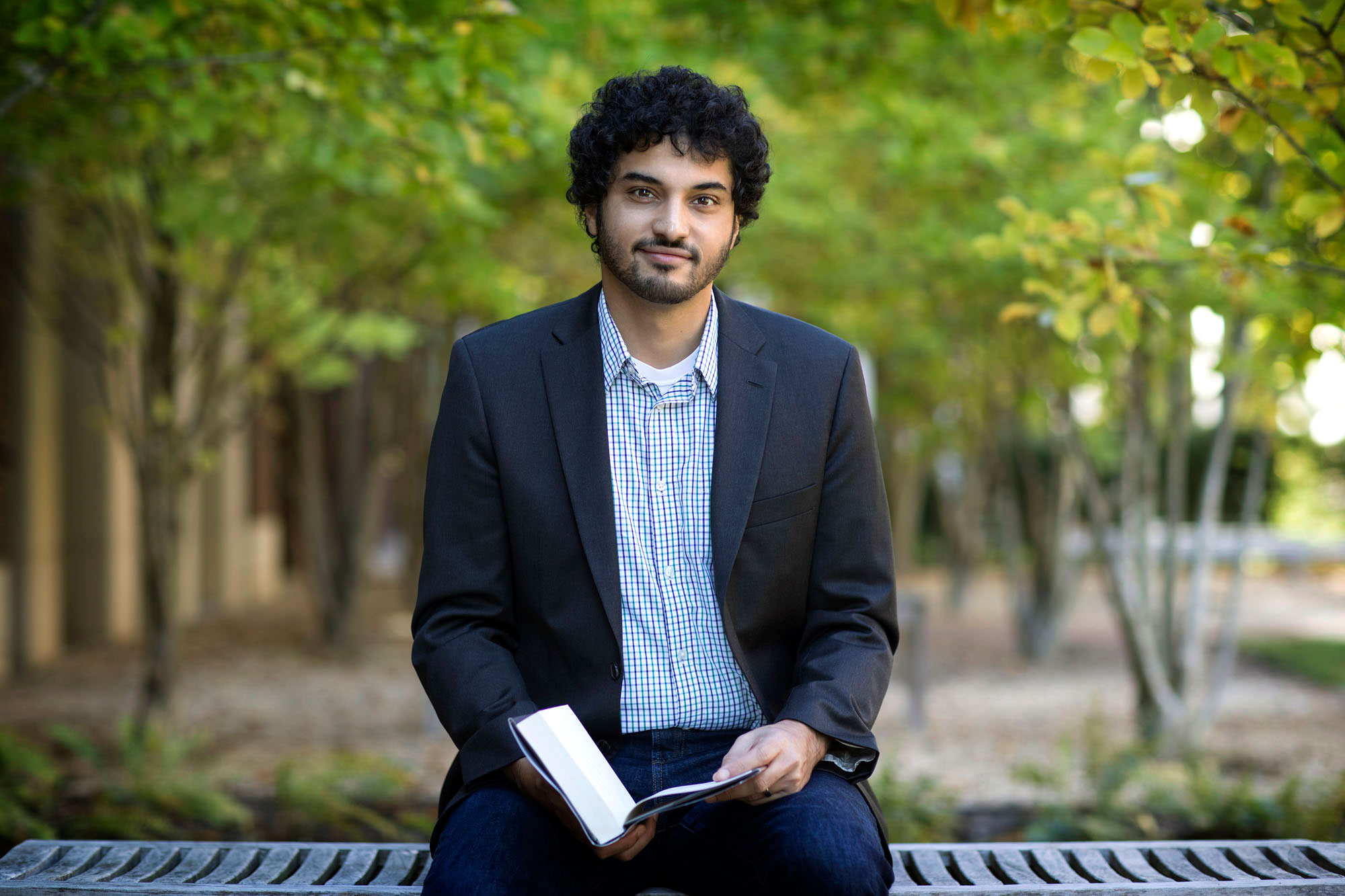 Descended from a long line of ship’s captains, Fahad Bishara has come to the piedmont of Virginia to write about the Indian Ocean.

“I am conscious of the degree of distance between me and the ocean and that helps me think about it as this big space,” he said. “It might give me some perspective because it helps me see how all these places fit together.

In a relatively new field of study, Bishara teaches about the Indian Ocean and the connections between the Middle East, South Asia, East Africa and Southeast Asia.

“I look at groups of people who migrate to these different places, move around the ocean – some of them sailors, but mostly merchants who go to different places and set up shop,” he said. “At some point, these places are coming into contact with one another and these societies that live on the coasts of these regions are often very different from the people who live inland.”

Bishara was raised in Kuwait, in an Arabic-speaking home, though his formal education was in English and Arabic. Not a sailor himself, his forebears were and, until the 1950s, his grandfather sailed regularly from Kuwait to East Africa to India and back, spending nine months of the year at sea. His father was the first to step away from work onboard, becoming an engineering professor in Kuwait.

“When oil was discovered on the land, it wasn’t considered sensible to go out to sea anymore because you did not have to cross the sea to search for wealth,” he said. “The government took advantage of oil wealth and set up scholarships for engineers and professors, because they needed to set up a modern state.”

Raised on the edge of the Persian Gulf, Bishara’s fascination turned east.

“I mostly look from Arabia outward to the Indian Ocean,” Bishara said. “Oman, the United Arab Emirates, Kuwait, Yemen – they are considered peripheral to Middle Eastern history. People aren’t really interested in them because the Ottomans weren’t there. They are not the centers of Arab nationalism; they are not what people associate with the great cities of Arab civilization. And yet, for me, that is what makes them interesting. But they are incredibly dynamic, if we are to look at them from the perspective of the sea.”

This perspective from the sea gave Bishara his calling. He toyed with the idea of becoming a journalist, but eventually rejected it, getting a degree in international relations and politics from the University of Southern California. When he graduated, he took a job in a think tank in Dubai as a copy editor.

“I did that for about a year and a half surrounded by Ph.D.s in economic and political science and, watching them do their work, I realized that’s what I wanted to do,” he said.

He attended the University of Exeter in the United Kingdom, encouraged by a Canadian historian he met in Kuwait. Bishara pursued a master’s degree in Middle Eastern studies with a focus on history.

After he completed his master’s degree, he went to Duke University to earn a Ph.D. in history. And while he had planned to return to Kuwait, opportunities presented themselves to him in the United States. He received a fellowship to Harvard University and a job offer at the College of William & Mary.

After a few years teaching in Williamsburg, Bishara saw an advertisement for an Indian Ocean history professor at UVA.

“When UVA advertised the position in Indian Ocean history, which is really unusual, I thought, ‘I have to apply,’” he said. “When I visited, I realized there is a lot going on here, particularly the Global South Initiative of Arts & Sciences Dean Ian Baucom. He’s made a lot of resources available for the study of the Global South, of which the Indian Ocean is a major component. There is a real dedication here to the study and research of the non-Western world. I thought, ‘This is the place to be.’”

In 2015, the University received $3.47 million from the Andrew W. Mellon Foundation for a major humanities initiative dedicated to the study of the “Global South.” The College and Graduate School of Arts & Sciences is matching the grant, making the initial five-year investment to launch the initiative about $7 million. The funding will go toward 10 new tenure-track faculty lines, the creation of humanities laboratories to foster new experiential forms of learning, and the creation of 50 new courses and research focused on the connected histories and cultures of the Global South, including Africa, Latin America, South and East Asia and other world regions.

“In an increasingly global world, Fahad’s current research on shipping trade between the Persian Gulf, India and East Africa in the late 19th and early 20th centuries makes manifest the interconnectedness of those regions in ways that more purely geographically oriented history – Middle Eastern history, South Asian history and African history per se – may not,” Parshall said. “His study of trade, in particular, also quite naturally raises legal and broader economic questions about the Global South that situates his scholarship perfectly within the College’s Global South Initiative.

After living nomadically for many years, Bishara, who is now married and has a young son, is putting down roots. He said he is impressed with the international flavor of the Charlottesville community.

“This is a place that has a very active student life and you can engage with it when you want to, but when you don’t, and you just want to enjoy life in Charlottesville, you simply cross the street,” he said.

He still travels back to visit his family in Kuwait and his research will bring him closer to his homeland and his ancestors.

“As much as Indian Ocean history has developed in the past decades, we still don’t have anything that deals with mariners and how they might have seen this world. When I found these materials, I knew I had to write about these guys.”

Netflix to Add Ads. Why This Could Be a ‘Game-Changer’ for Your Viewing Experience END_OF_DOCUMENT_TOKEN_TO_BE_REPLACED

What’s Next for UVA’s Class of 2022? END_OF_DOCUMENT_TOKEN_TO_BE_REPLACED