Professors: The Conflict in Ukraine Could Escalate in Many Ways 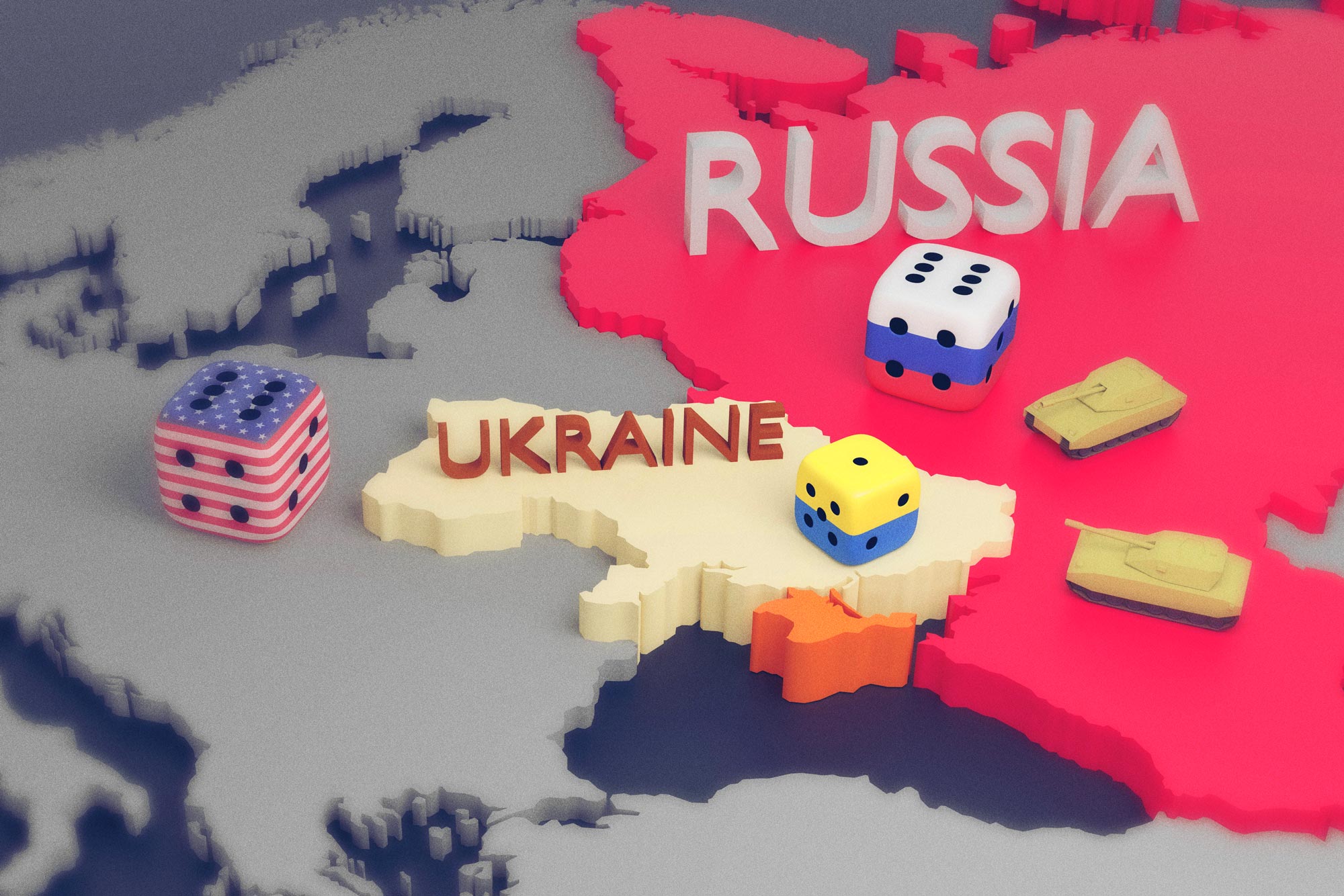 A month after Russia’s war on Ukraine started, there are many ways it could expand.

Two professors whose research involves national defense and foreign affairs discussed on Monday the implications for escalation in the conflict in a livestreamed webinar from the University of Virginia’s Miller Center of Public Affairs. Philip Potter is an associate professor of politics and public policy at the Frank Batten School of Leadership and Public Policy and the Director of the National Security Policy Center, and Allan C. Stam is a University Professor of public policy and politics at the Batten School and a Faculty Senior Fellow at the Miller Center. William J. Antholis, the Miller Center’s director and chief executive officer, moderated the discussion.

Stam opened by noting that nothing has gone as planned or expected for the Russians – or the United States, which does not have large business or demographic interests in Ukraine.

“Ukraine is not a member of NATO, and at the same time, the United States has a great interest in broader European stability,” Stam said. “And by that I mean not tolerating independent states or countries invading their neighbors. It is a terrible precedent, both for trying to manage and maintain stability in the international system and … from a human rights or a civilian population perspective.”

While Potter agreed, he noted that U.S interests, and the perception of U.S. interests, are “evolving.”

“Alliances are playing a larger role here than people anticipated in the front end,” Potter said, noting that scholars would have predicted the Ukraine conflict to be a stress point on the NATO alliance. “Instead, we see very much the opposite. A coalescing of alliance relationships, and that puts a bunch of things on the table in terms of is this an opportunity for alliance deepening and expansion – and is that in U.S. interest, or is that a potential risk of the sort that got us into this situation to begin with?”

Potter said the fight was going poorly for the Russians. With Russia “on the ropes,” he said, the U.S. has to determine if it wants to extract what it can from the situation, or whether the national interest dictates that the U.S. reduce pressure on Russia. He suggested the correct answer is in the middle.

“You want to be very careful about moving Russia into a situation of true desperation,” he said. “At the same time, I think there are going to be pressures on the administration to perhaps go further than it should in pursuit of those interests.”

Stam and Potter agreed that Russia could draw NATO into the conflict, and both were concerned that Russia may resort to tactical nuclear weapons, or chemical and biological weapons. Potter noted that if NATO felt like it was being drawn in, its members might push Ukraine toward the bargaining table.

“I don’t worry too much about the small escalation designed to draw NATO in,” Potter said. “At this point, if Putin drew NATO in, the only way to survive and get back out would be to go into a much more escalatory and potentially nuclear type of situation. The strategic logic to me of having Putin tempt us in is not a compelling one.”

He said instead of drawing NATO in, the Russians may try to practice a level of brinksmanship to get NATO to back down – but may miscalculate. 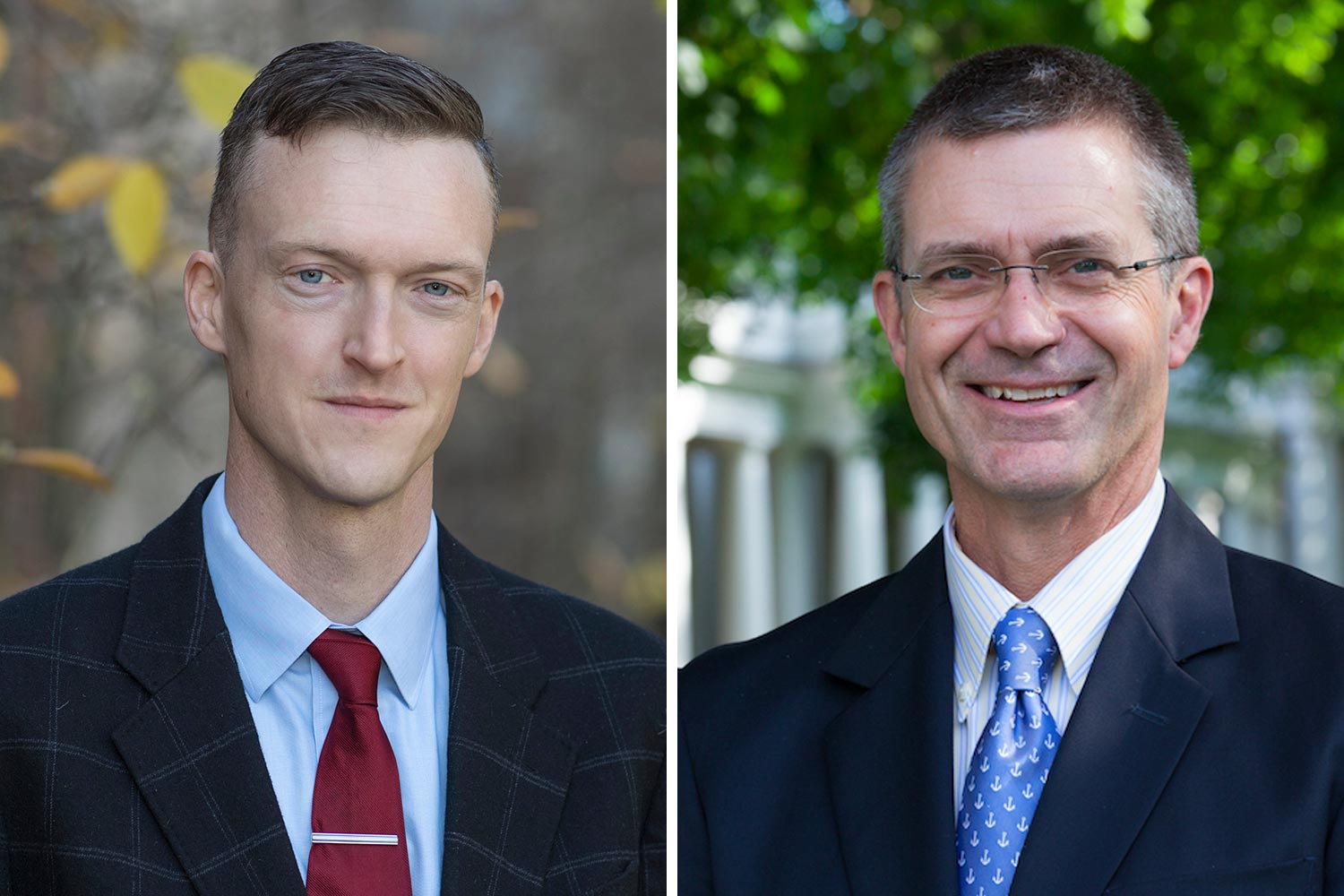 Philip Potter, left, is an associate professor specializing in foreign policy and international relations. Allan C. Stam is a professor of public policy and politics whose research focuses on the dynamics of armed conflict between and within states. (Contributed photos)

Stam argued that while Russia targeting civilian populations was part of its military doctrine, it did not play well in public opinion.

“Partly, I think, this has to do with the rise of social media and the availability of these images, but the political pressure here on NATO country leaders and on President Joe Biden will increase dramatically if we see really large-scale attacks on civilians in places like Kiev and other Ukrainian cities,” Stam said.

Potter dismissed this possibility, though, noting that while people have talked about the mobilizing effects of media on government action, there is not a lot of public appetite for war.

“We haven’t seen public opinion numbers on this budge since the start of the conflict, and generally speaking, the public tires of these situations. They don’t warm to them,” Potter said. “The fact that we have gotten this far without change in public opinion leads me to think that the amount of [public] pressure is going to stagnate, especially for things that involved boots on the ground.”

But Potter agreed this could change drastically if there were to be a large chemical or nuclear attack in Ukraine.

Antholis, the moderator, raised the question of whether Putin could interpret outside bodies sending arms to Ukraine as escalation.

Stam said that traditionally there has been a difference in targeting weapons versus targeting people, and he said, up to this point, Russia has not objected to NATO supplying the Ukrainians with weapons. Stam said the political pressure would increase if Americans ended up being killed while supplying Ukraine with weapons.

“From an American perspective, that would be hugely problematic,” Stam said. “There are so many different pathways forward that increase the risk, it is hard to predict what may happen.”

“I would argue that it would be a terrible choice for the Ukrainians as well, because currently there is a public opinion struggle going on inside Russia, and that would likely galvanize opinion,” Potter said.

Potter also noted that the U.S. had been arming Ukraine for years, and thus sending missiles now would not seem like an escalation, but just a continuation of standard practices.

He added that he thought Putin was immune from name-calling, such as Biden’s recent labelling of him as a “war criminal.”

“I think [Putin] is playing a bigger game here, and from a personal/financial/reputational standpoint, financially he is fine, and reputationally I don’t think he cares what the Biden administration thinks he is. I don’t see any scenario where Russia is trying to get back to a status quo situation in terms of ‘if you turn these sanctions off, we will leave Ukraine and it will all be roses.’ I think we are way past that point.”

On the question of a Ukrainian victory, Potter said he thought in some ways Ukraine had already won.

“There has been this emergence of a Ukrainian identity and what I think will be permanent resistance to whatever Russian presence is there,” Potter said. “This conflict, like most conflicts, has made a fool out of anyone who is trying to predict what will happen, but I think the modal view here is that it will lock in place a significant Russian carve-out around the edges of Ukraine and some sort of pseudo-border going on there. And frankly, I would argue that is a Ukrainian victory. The fact that they still exist as an independent state with an independent political authority, and that political authority is going to lean ever more westward, is what victory looks like.”

The conflict apparently has not yet involved any crippling cyberattacks against Ukraine.

“To me, one of the most fascinating things about this conflict is that it is remarkably old school,” Potter said. “This should have been a conflict, if the planners game it out, it should have been all robots and cyber and space. And the dog that didn’t bark in terms of cyber conflict is one of the things I am going to be keeping an eye on as we start getting more information about what is going on.”

Stam said the U.S. may have misinterpreted Russian’s capability for cyberattacks, noting that Russia has other sophisticated weapon systems, but few working models.

Finally, Antholis questioned where China fits in the Ukraine situation and how this affects its dispute with Taiwan.

Potter noted that the mainland Chinese have historically been risk-averse, but have a growing economy and strong military. Potter does not believe that China’s leaders will provide strong support for Russia, though they may pay lip service and give some financial and military aid.

Stam noted that the resistance Russia was getting from Ukraine, with which it shares a land border, may make the Chinese reluctant to move on Taiwan.

“This essentially demonstrates the risks for the United States; while we have much greater interests in Taiwan than we do in Ukraine, it also reveals to the United States that sanctions may not be enough to have an actual impact on the decision-making or the anticipation of sanctions from a deterrent perspective. All this helps to further complicate the thinking about Taiwan and pushes that rock further down the road.”

Potter said the Chinese were also taking notice that the NATO allies were working closer together, and suggested that might give China pause for advancing on Taiwan.

Stam noted the U.S. and the Soviet Union had a long history of being in conflict, but not going to war with each other, and if the U.S. remained steadfast in its support of Ukraine, that may act as a deterrent against China in the case of Taiwan, which he said was the more long-term issue.

Potter said the Ukraine situation would become protracted, with both sides trying not to lose, but he also agreed that the U.S. and Russia would ultimately be able to avoid direct conflict.