Pursuit of ‘AND’ Drives Mendenhall 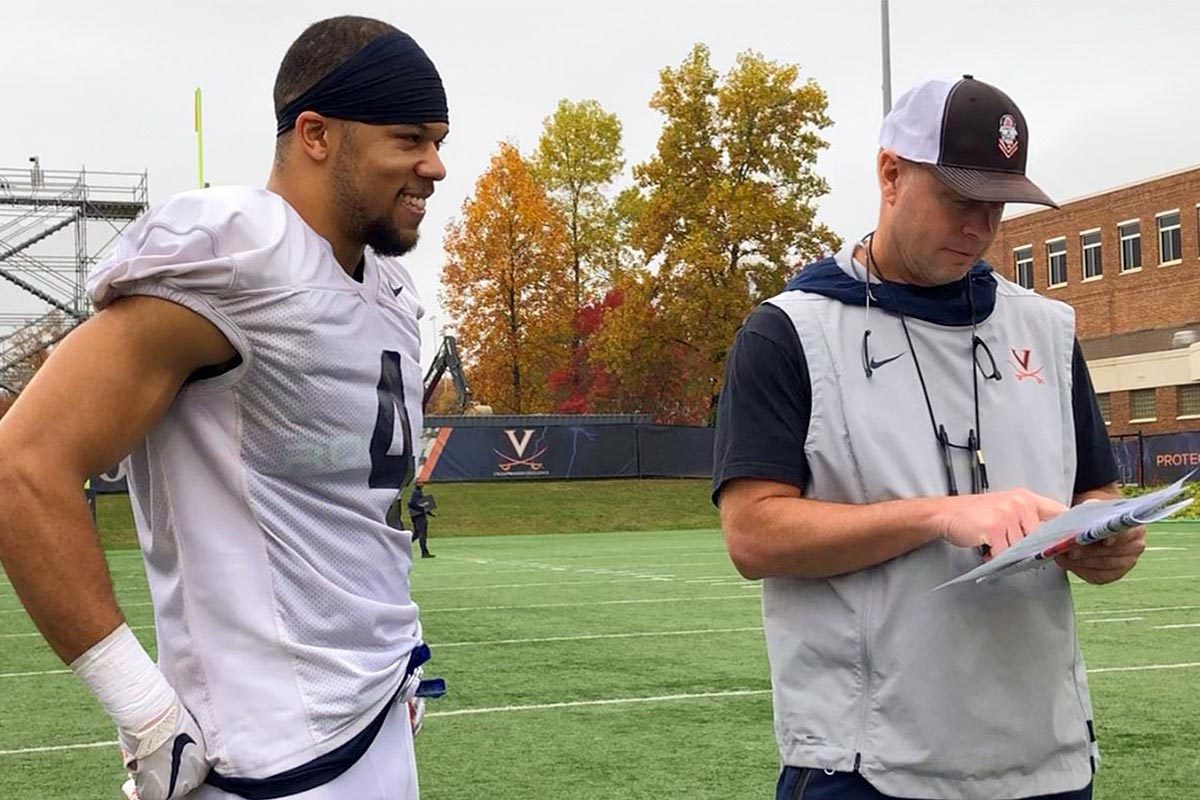 At the end of a recent practice, University of Virginia head football coach Bronco Mendenhall called his players together at midfield. After asking senior linebacker Jordan Mack to join him in front of the team, Mendenhall shared a letter from the National Football Foundation & College Hall of Fame.

Mack, Mendenhall read, had been named one of 12 finalists for the William V. Campbell Trophy, which is presented annually to the top scholar-athlete in college football, and would receive an $18,000 postgraduate scholarship.

If Mack wins the Campbell Trophy, as former UVA linebacker Micah Kiser did in 2017, his scholarship would increase to $25,000. (Another Virginia linebacker, Tom Burns, won the award in 1994).

Mack’s teammates cheered, and Mendenhall beamed. Mendenhall has lofty goals at UVA, where he’s in his fourth season, and to see them realized delights him. He loves the concept of “AND,” his belief that players can (and should) distinguish themselves in football and other pursuits simultaneously.

“It is important to me that they’re more than football players,” Mendenhall said Thursday in his McCue Center office.

So when long-snapper Lee Dudley and linebacker Charles Snowden told Mendenhall that they wanted to spend five weeks in Spain with the UVA in Valencia program late last spring, at a time when many of their teammates would be in Charlottesville training, he encouraged them to go.

And when nose tackle Jowon Briggs, a gifted vocalist and musician, said he wanted to practice and perform in the University Singers during football season, the Cavaliers’ coach gave his blessing.

And when punter Nash Griffin, a fourth-year student in the McIntire School of Commerce, asked for permission to fly to San Francisco for a job interview last month, a trip that would force him to miss a practice three days before UVA’s game with Duke University, Mendenhall granted it.

Griffin, who later was offered the job, said Mendenhall’s decision did not surprise him.

“He preaches ‘AND,’” Griffin said, “and so I know that he’s a man of his word, and that’s exactly what I got.”

Mendenhall said: “Certainly he gets to go. It’s an opportunity that he’s earned. He’s at the University of Virginia, for heaven’s sake. These kids come to Virginia to become qualified, educated and marketable and to have amazing futures. Trust has been established, because Nash has done everything that I’ve asked him to do, and I know that he’ll recover and do everything he can to get back and compensate for [the missed practice] to ensure that he contributes to the team in the highest level possible.”

He would have done the same thing, Mendenhall said, for a player at any other position, except perhaps quarterback.

“It really isn’t a hard decision for me,” he said. “I think decisions are made based on principle, and I think principles are governed by beliefs. AND is one of our guiding principles, and that’s based on my belief that football’s a vehicle to develop people.”

After defeating the University of North Carolina, 38-31, in Chapel Hill on Saturday night, Virginia (6-3 overall, 4-2 ACC) is in first place in the Coastal Division. UVA opens a season-ending, three-game homestand Saturday with a 12:30 p.m. game against Georgia Tech.

Mendenhall knows there are those who, after a poor performance or a loss by the Cavaliers, will argue that players should focus more on football and less on other activities.

“My basic stance is, I don’t agree and it’s not worth it,” Mendenhall said. “I’m looking for the complete development in everyone in our program – and winning. One is not at the expense of the other. I think they go hand-in-hand, and winning without the other would be hollow to me. Those principles and those experiences and the other things that our players are exploring, they would also be hollow, but less hollow, without the winning.

“So I’m in pursuit, and we’re in pursuit as a football program, of both of those things, and without compromising our expectations for one or the other. I want good young people. I’m talking about morals, values, character, behavior and contribution to the world. And I want a great team. I know it sounds idealistic, but I wouldn’t coach football if I didn’t think it could be done, and I won’t coach here if I don’t think there’s support for doing it that way.”

Mendenhall has that support.

“When I first arrived at UVA and saw Coach Mendenhall’s principle of ‘AND,’ I was so inspired,” athletics directors Carla Williams said, “because everything I love about college athletics is built on that principle. The young people we serve are more than athletes. They are incredibly talented individuals that value every opportunity this great university has to offer. It’s our responsibility to help them maximize their UVA experience.”

“Friday is a continuation of Thursday,” Mendenhall said. “Thursday’s Hero is part of every team meeting on Thursday, and Thursday is stressful, because it’s the last opportunity to really practice what you’re going to play against, and sometimes you’re not in the right mindset right after practice, but then here comes our honoree, and it adds balance and perspective immediately to where football stands.

“And I want to be really clear: That doesn’t mean we don’t value football. We absolutely want to win the Coastal, the ACC and a national championship. You can’t have higher goals. But we’ve designed this to where there are other things that happen every week, every Thursday for sure, and every Friday, where we’re giving back. Put it this way: I don’t think a person becomes as mindful, as humanitarian and, quite frankly, as happy without giving back.”

In most college programs, Mendenhall said, the day before a game is reserved for football activities. He’s more flexible. On the night before UVA’s Oct. 19 game against Duke at Scott Stadium, Briggs sang a solo with the University Singers during the McIntire Department of Music’s choral showcase at Old Cabell Hall.

Of Briggs’ role in the University Singers, Griffin said: “It’s a good reflection of our team principles.”

A true freshman from Cincinnati, Briggs has started five games for the Wahoos. After he was selected for the University Singers, Briggs asked Mendenhall if he could perform with the group on the night of Oct. 18, when his teammates would be together preparing for the game.

“He’s a first-year, and trust is being established, because we hadn’t been together as long,” Mendenhall said. “But the way he was going about it, as a young person and as a first-year, made that easy. And because of who he had become for those number of weeks prior to that game, his teammates thought it was really cool and didn’t worry about how he would play.”

Mendenhall said he considered how other players would react when he granted permission for Snowden and Dudley to spend five weeks in Valencia. Their program fell during a part of the year when many UVA players are in Charlottesville working out with the strength and conditioning coaches.

“In a football program, when you create a difference, you have to manage the difference,” Mendenhall said. “And for some players to be abroad and not with our strength staff, or not running with or lifting with their teammates, there is a risk and a potential there for a team to be divided and people to be viewed as not as committed. I acknowledge that, and I mentioned it to [Snowden and Dudley], that that’s a real thing for them and how they’re going to be viewed. So then trust again comes into play.”

Snowden and Dudley took workout programs to Spain with them and trained on their own. Each returned to Charlottesville ready for football after an enlightening experience in Europe.

Everyone’s playing career will end one day, Mendenhall noted, but that’s not the only reason he wants his players to challenge themselves off the field during their time at UVA.

“I don’t know why meaningful things can’t happen while football is still going and while these young people have leaders and mentors and infrastructure around them to help them navigate other things while they’re with us,” Mendenhall said. “Then that’s their best chance to expedite their learning and growth and facilitate that, rather than waiting until football’s over, when they have to navigate things by themselves.

“I think their lives can be enriched through their experience in football and this program, which endorses and advocates that they do other things.”

A Year We Will Never Forget: 2019-20 in Review END_OF_DOCUMENT_TOKEN_TO_BE_REPLACED

‘What Will You Carry With You?’ Remarks From UVA President Jim Ryan END_OF_DOCUMENT_TOKEN_TO_BE_REPLACED