Putting It All on the Line 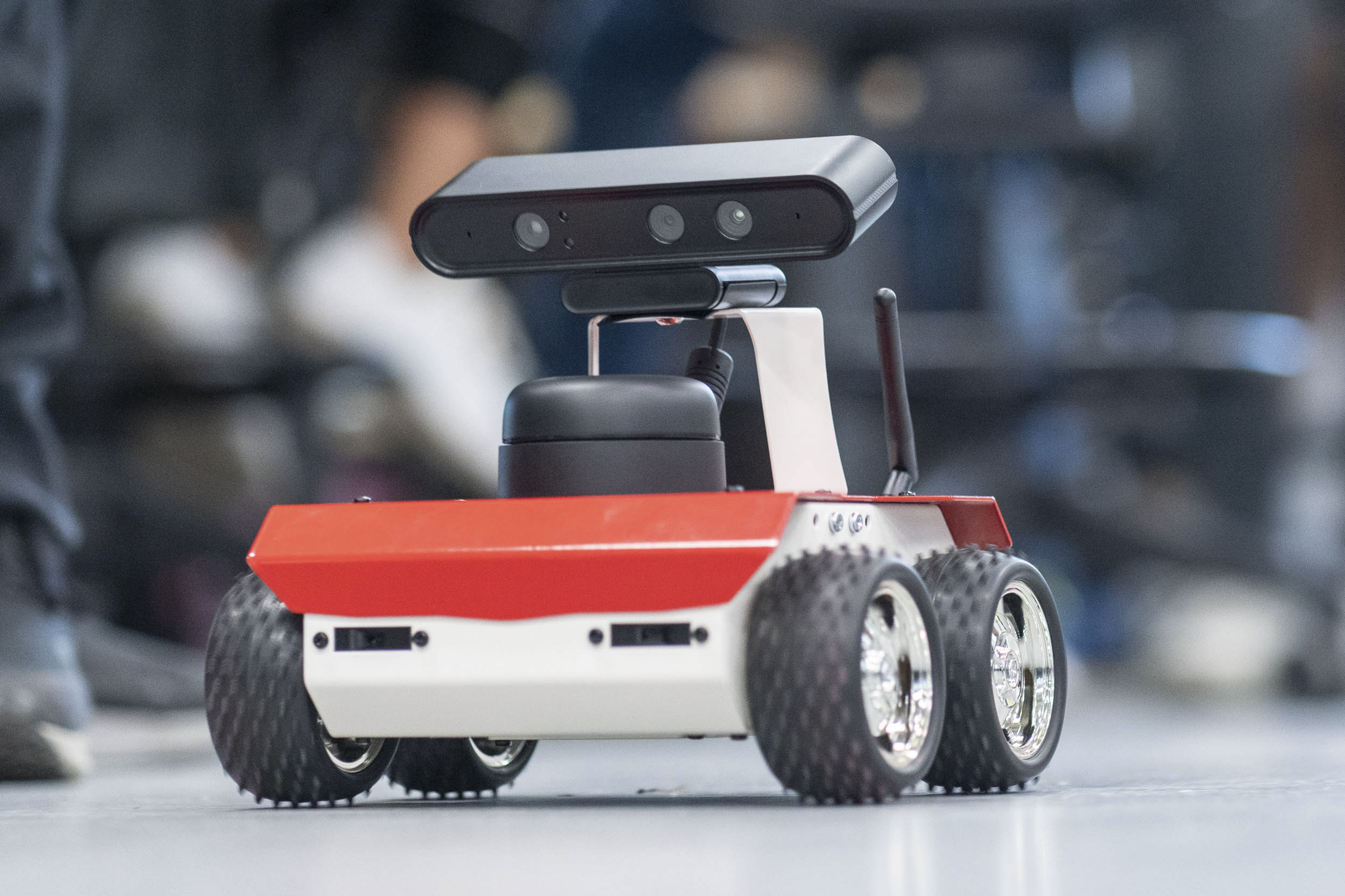 Nicola Bezzo, an assistant professor in the departments of Engineering Systems and Environment and Electrical and Computer Engineering at the University of Virginia’s School of Engineering and Applied Science, teaches students how to build better autonomous systems through a mobile robot competition.

In a culminating event for Bezzo’s “Autonomous Mobile Robots” course, students collaborate to power their challenger robots, applying a combination of mathematical models and sensors that give the machines self-driving capabilities.

His course and its competition demonstrate to students the complex but important work that goes into ensuring a future in which people can trust autonomous systems. 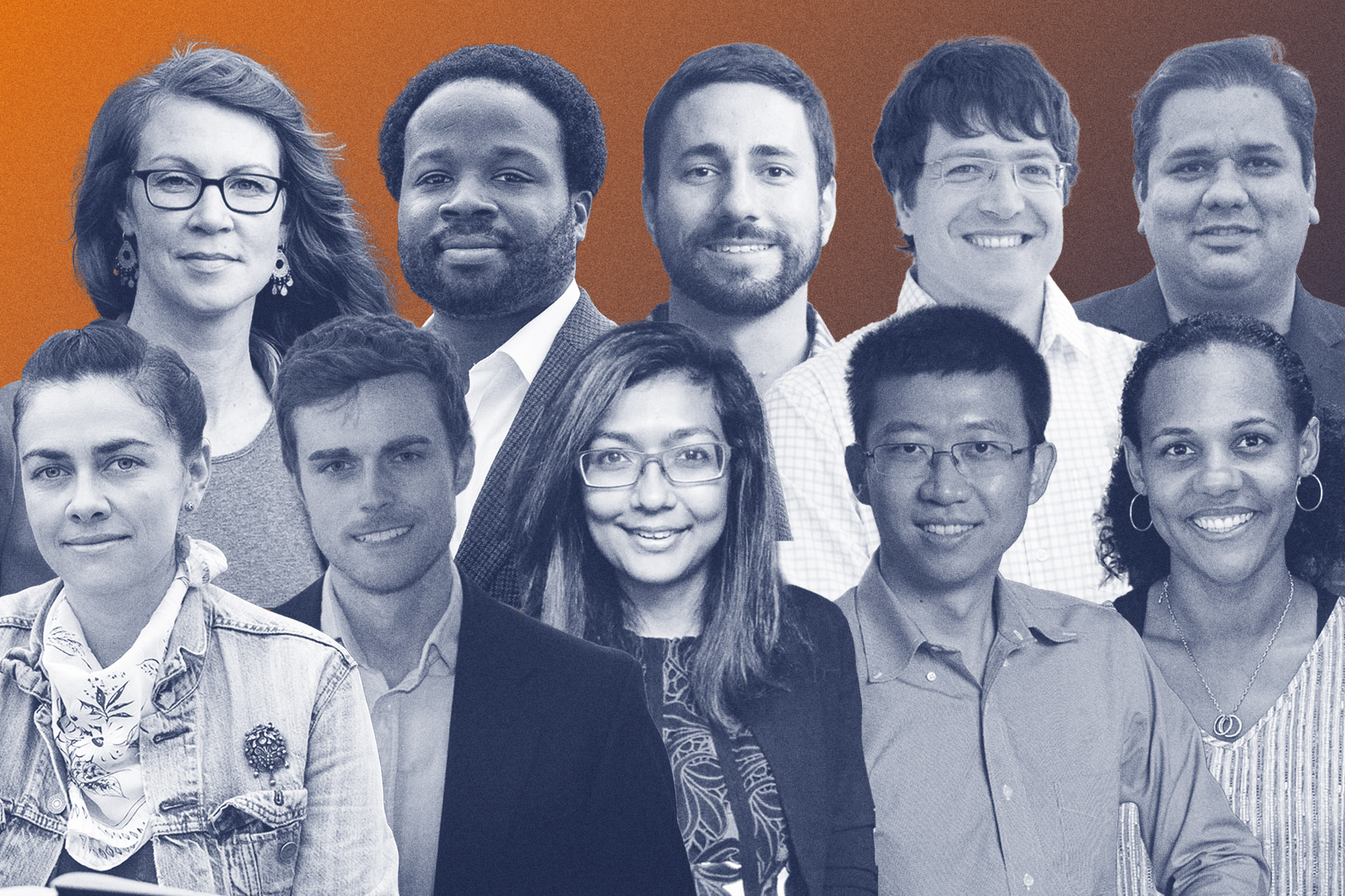 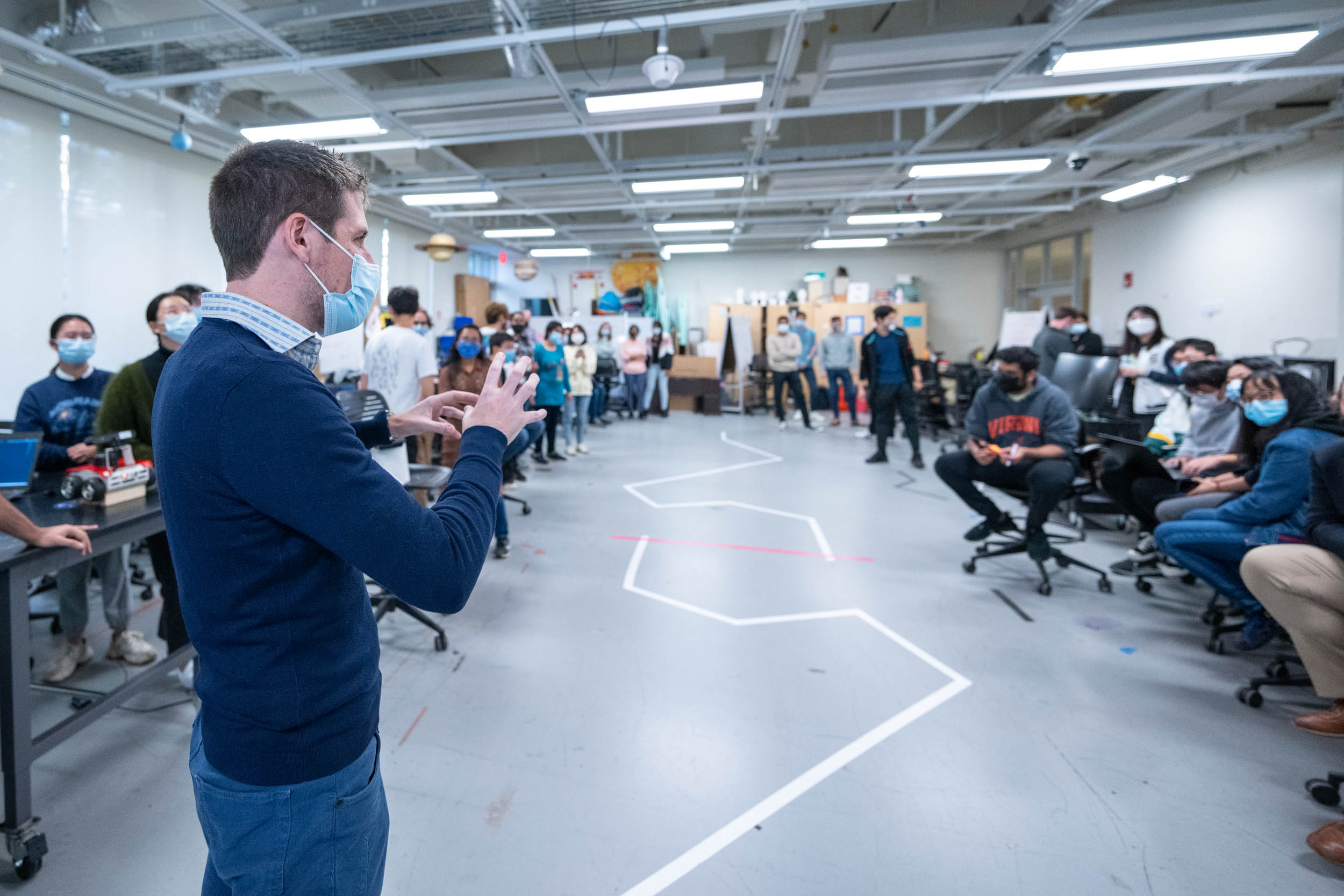 Nicola Bezzo, assistant professor in the departments of Engineering Systems and Environment and Electrical and Computer Engineering, talks to students participating in the autonomous mobile robots competition.

The pandemic forced Bezzo to pivot to an online format for last fall’s contest. But with a return to in-person classes across Grounds this semester, he welcomed students back to an in-person event on Nov. 3.

“Live competitions are always challenging because hardware is often unpredictable,” Bezzo said. “Even if students expertly tune their controller, there are always disturbances and changes in the system that affect the performance and can completely change the behavior of the robot.

“Things as simple as altered lighting conditions will cause the robot to operate differently during a race than during practice.” 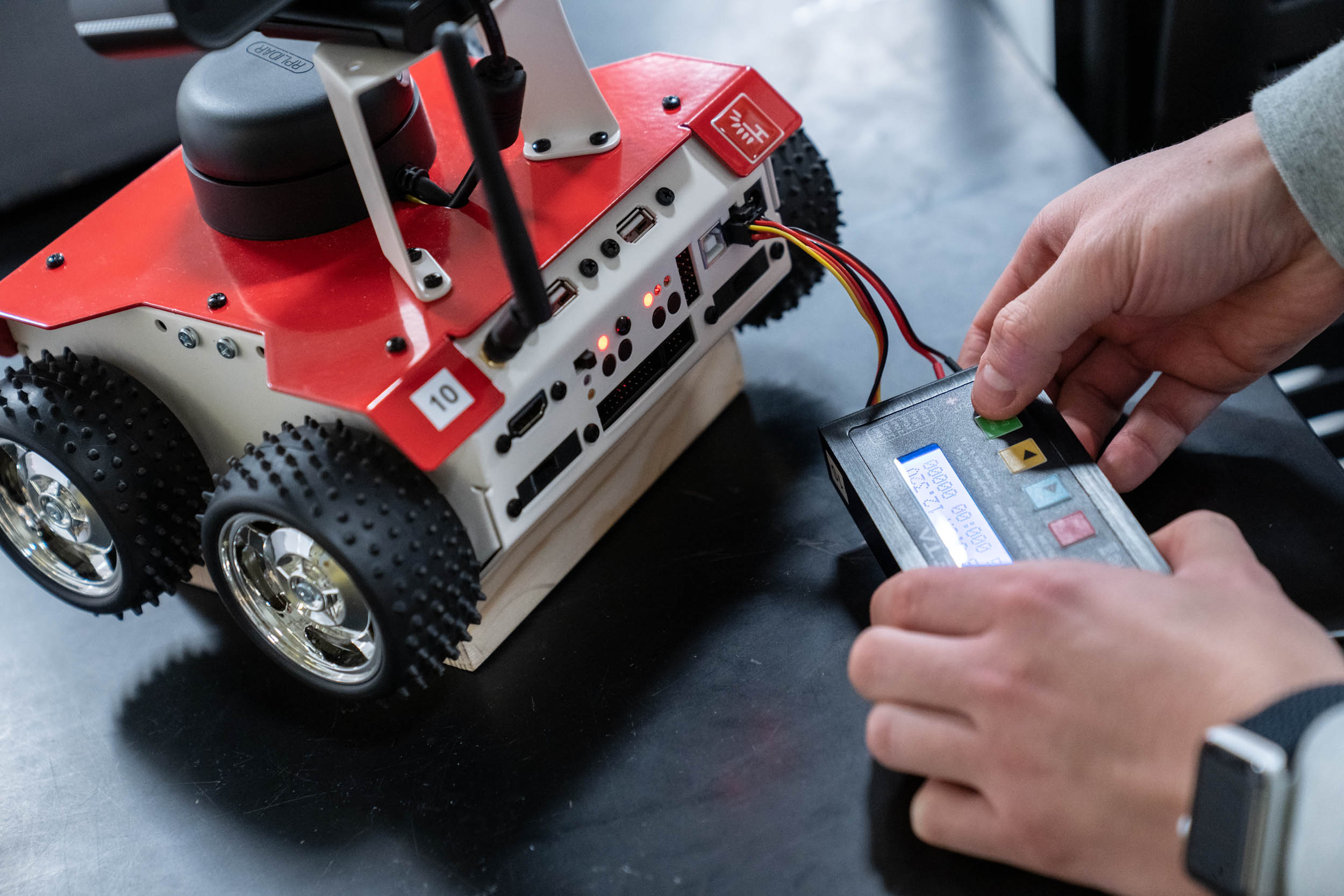 Teams participating in the competition outfitted the robots with custom algorithms.

Ten four-student teams came to the challenge armed with the same robot, an open-source autonomous platform called a ROSbot, that they had customized with their race-ready algorithms. The first round of competition was a line-following test, to see which robot best navigated a specific course that none of the students had seen prior.

After eight successive heats of two teams vying head-to-head for the best performance on the same path, Team Five captured the top spot.

“A major takeaway from the competition for me is the importance of teamwork,” Nagireddy said.­ “Members of my team are from diverse fields, and each one brought different talents to the table. Collectively, we were able to come up with something that worked really well.” 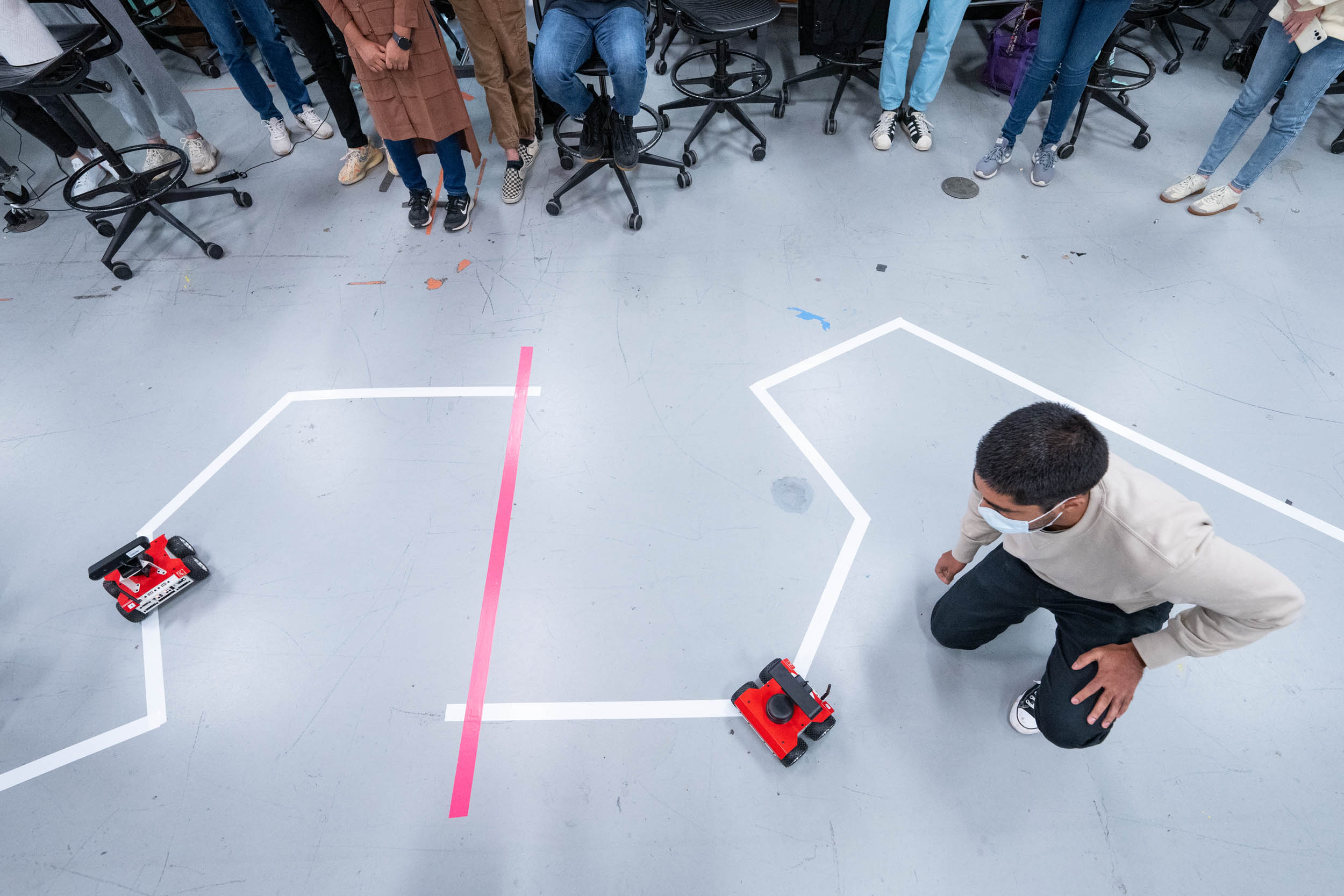 The first round of competition was a line-following test, to see which robot most expertly navigated a specific course.

Fehrman had enrolled in Bezzo’s course because of correlations with his own research around principles of operationalizing and modeling behavior, control theory, probability and statistics.

“I’ve learned how to apply mathematical tools in real-world settings where there are very clear success and failure conditions, something that is often missing from psychological science,” Fehrman said. “I hope to take ideas I learned from psychology and neuroscience and apply them to robotics problems in the future, such as how spiking neural networks may increase robot performance with noisy sensory measurements.”

John A. Stankovic, BP America Professor of Computer Science and director of the Link Lab, was an early champion for cross-cutting research in cyber technologies that are bringing a new era of challenges and solutions.

“Interdisciplinary team challenges, like Nicola’s competition, prepare our students for leading research and industry in a world where cyber-physical systems technologies are merged with every aspect of society,” Stankovic said. 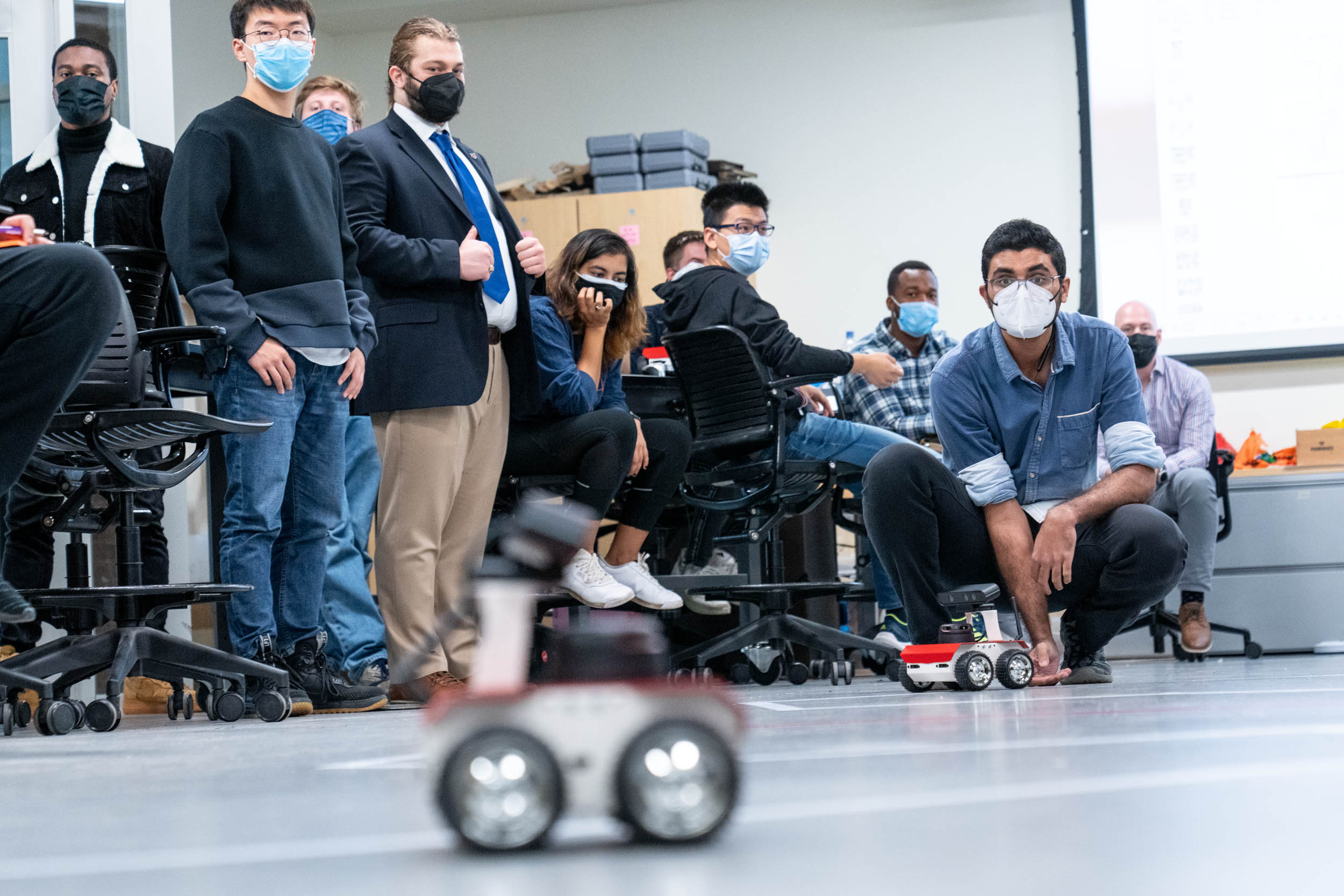 Bezzo warned students that any objects in the vicinity of the track could be misinterpreted by the robot’s sensors and lead it off course.

“I definitely want to use the ideas of hybrid systems and reachability analysis in my research, which is primarily in computational neuroscience,” Fehrman said. “I had never heard of these ideas before taking this course, but now they seem to be an obvious way to model many things that happen in the nervous system.”

Through their efforts to conquer the track, students also gained a window into just how complex it is to move self-driving vehicles out of testing scenarios into the real world.

“You always have to juggle between limitations and performance,” Gawali said. “There are n-number of approaches you can take to solve a robotics-learned problem, but there is no one true correct solution that will work for all situations.”

In the second round of competition, Bezzo introduced a surprise obstacle that would block the path. This time, the prize would go to the team that traveled the nearly seven-meter track in the fastest time. Team One grabbed top spot by finishing in 22 seconds.

“This was an impressive performance because the robot was driving at an accelerated and sustained speed in the straight segments, slowing down during the turns to align itself for the next straight segment, and then also maneuvering to avoid the obstacle,” Bezzo said. 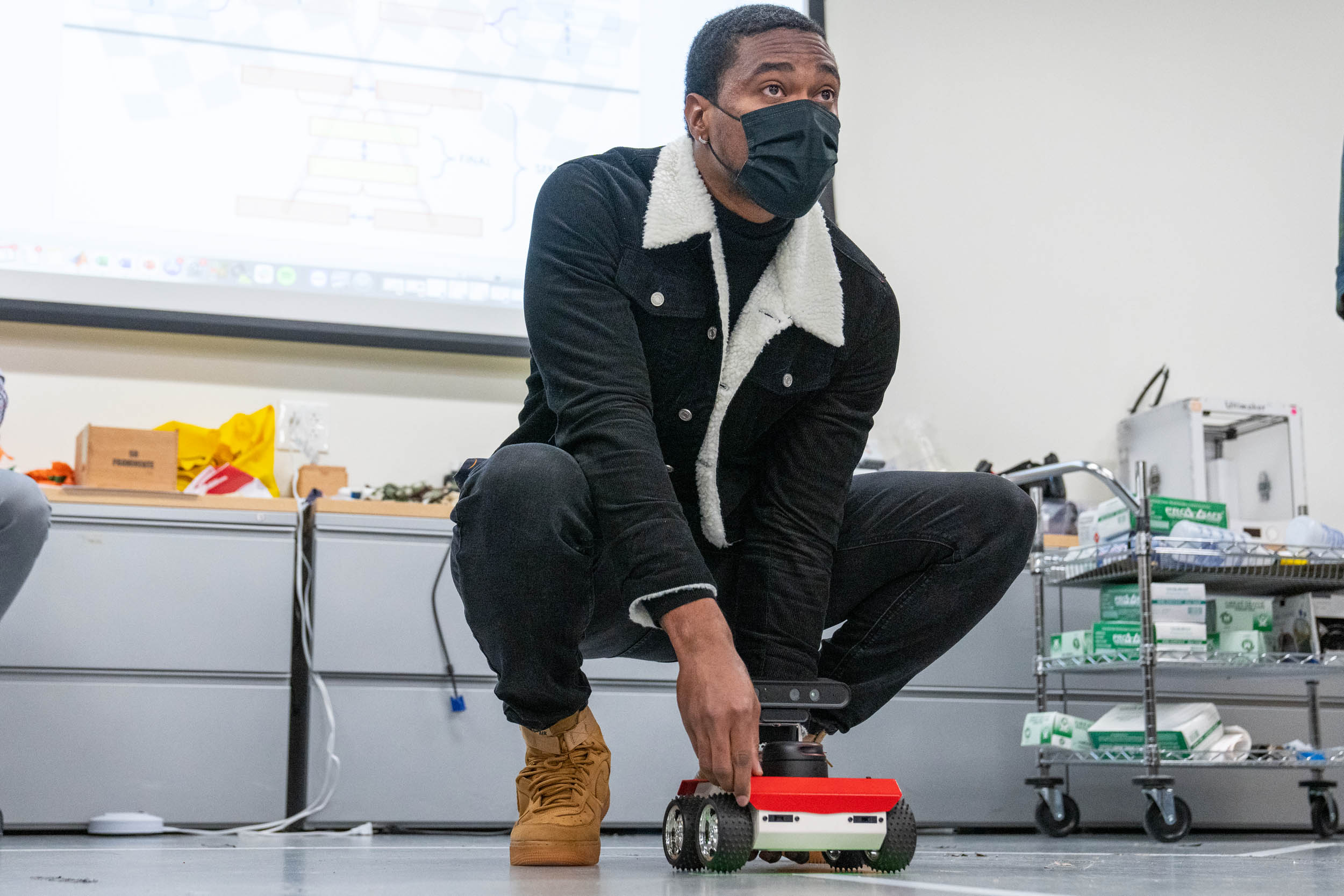 Dane Williamson, a computer science Ph.D. student, places his team’s robot on the track. Team One clocked the fastest time for the obstacles portion of the competition.

“My interest in autonomous vehicles was a huge motivation for attending graduate school,” Williamson said. He was thrilled to gain practical experience in robotics, particularly with the robot operating system, or ROS. “I had fun using the various forms of sensor data available to the ROSbot to allow it to navigate autonomously.”

For Toledo, the competition provided supplemental experience in line with his research under adviser Sebastian Elbaum, Anita Jones Faculty Fellow and professor of computer science at UVA Engineering. Their work in the Leading Engineering for Safe Software Lab focuses on deep neural network testing and verification methods for machine-learned software that operates autonomous systems – like the robots in the competition.

Bezzo and Elbaum, too, collaborate in research that will contribute to safer autonomous systems. It is one of many such partnerships demonstrating Link Lab’s vision for interdisciplinary projects that engage experts from diverse engineering disciplines in work to accelerate cyber-physical system breakthroughs.

Those cross-connections contribute to students’ research experiences as well. 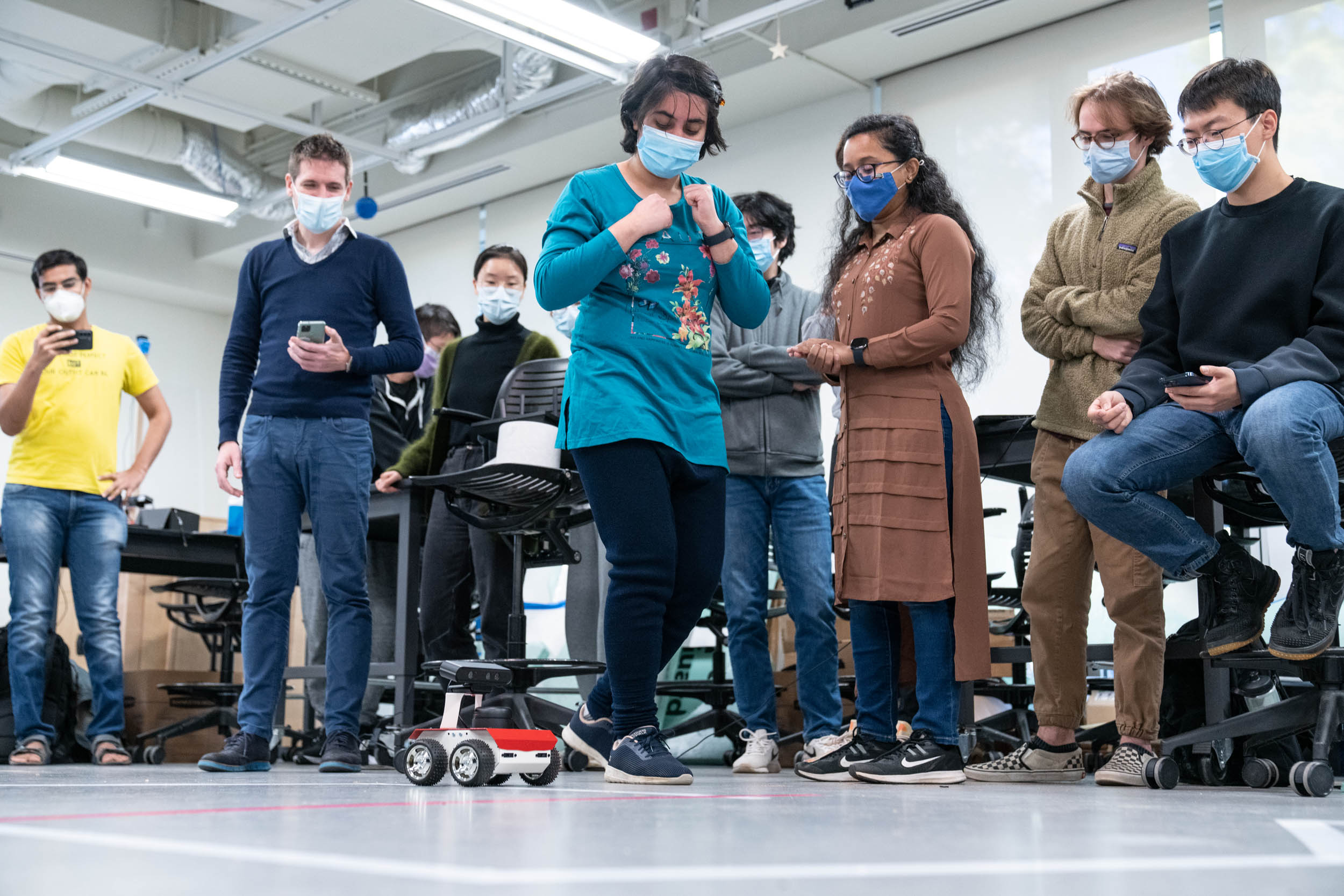 Teams cheered each other on throughout the competition in the spirit of collaboration, which is a hallmark of the experiential course.

“This was the first time I participated in an autonomous robot competition,” said Toledo, who was thrilled by his team’s win despite some early challenges in developing their code. “With effort, time and persistence, you can achieve even greater results than what you even expected or imagined.”

Clark credits the “Autonomous Mobile Robots” course not only with giving him foundational skills, but a boost of inspiration. “Our team really came together working on the competition, and our success has me even more excited for the work I’ll be doing in the lab,” he said.

One of the most exciting aspects of the 2021 competition was students’ opportunity for face-to-face camaraderie, cheering each other on during the shared learning experience.

“I enjoyed the atmosphere and competitive sportsmanship of it all,” said Haden, who has been participating in robotics clubs since he was in high school. “The robots take on a sort of personality when you work with them for so long and watch them spin around.”

“Working with my team has been great since they are very knowledgeable in the areas of the class that I am lacking, like software and hardware engineering,” Fehrman said. “I’ve learned a lot from them.” 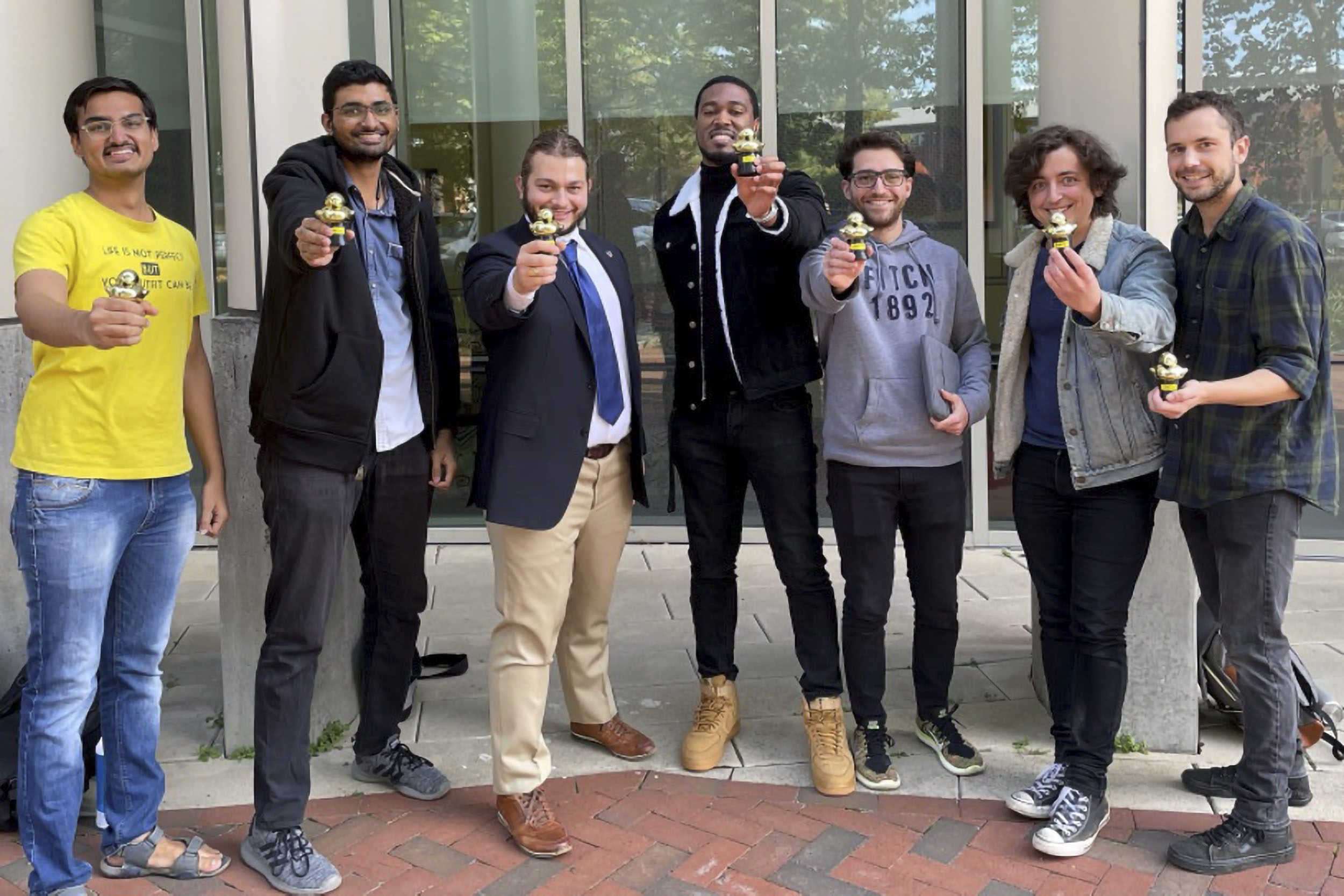 All students in the competition received a grade for their robot’s performance, contributing to their overall course grade. Students from both winning teams were also awarded Golden Duck Trophies.

The trophies Bezzo gives out are an homage to the prestigious International Conference on Robotics and Automation’s call for papers. When researchers submit papers including videos of their functioning robots, rubber ducks are placed in the frames to show the robots’ sizes. 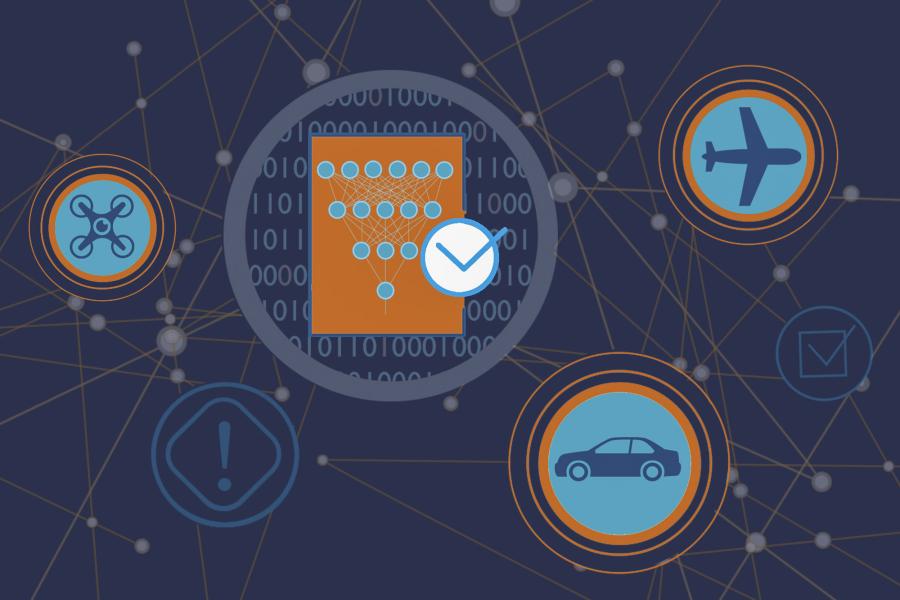 Before Machines Can Be Autonomous, Humans Must Work to Ensure Their Safety 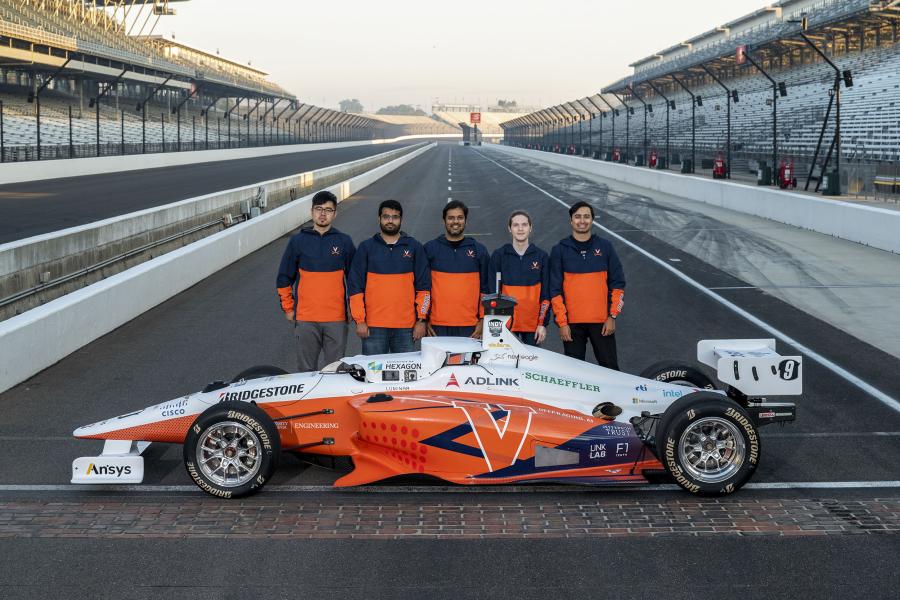 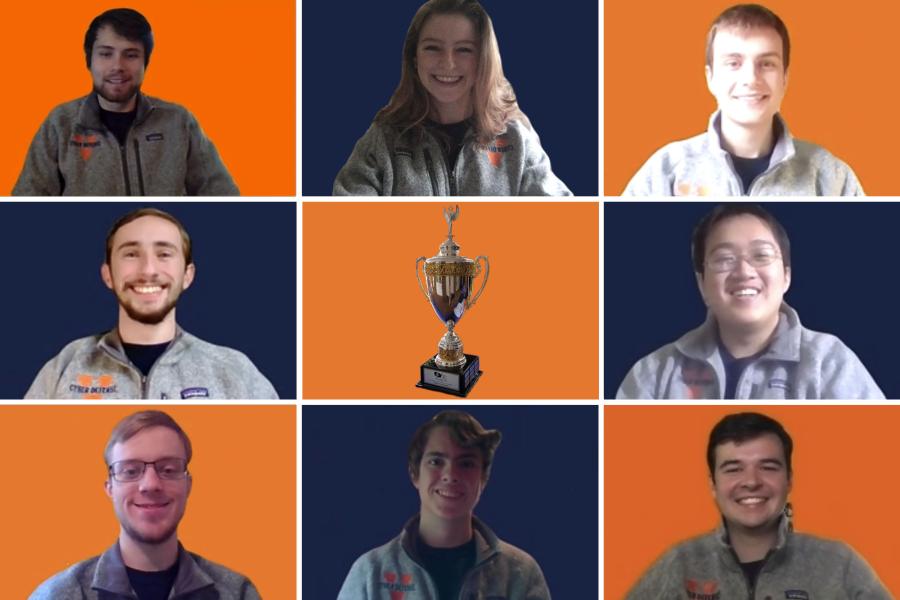