Q&A: This Alumnus is Leading the Charge for Democracy Around the World 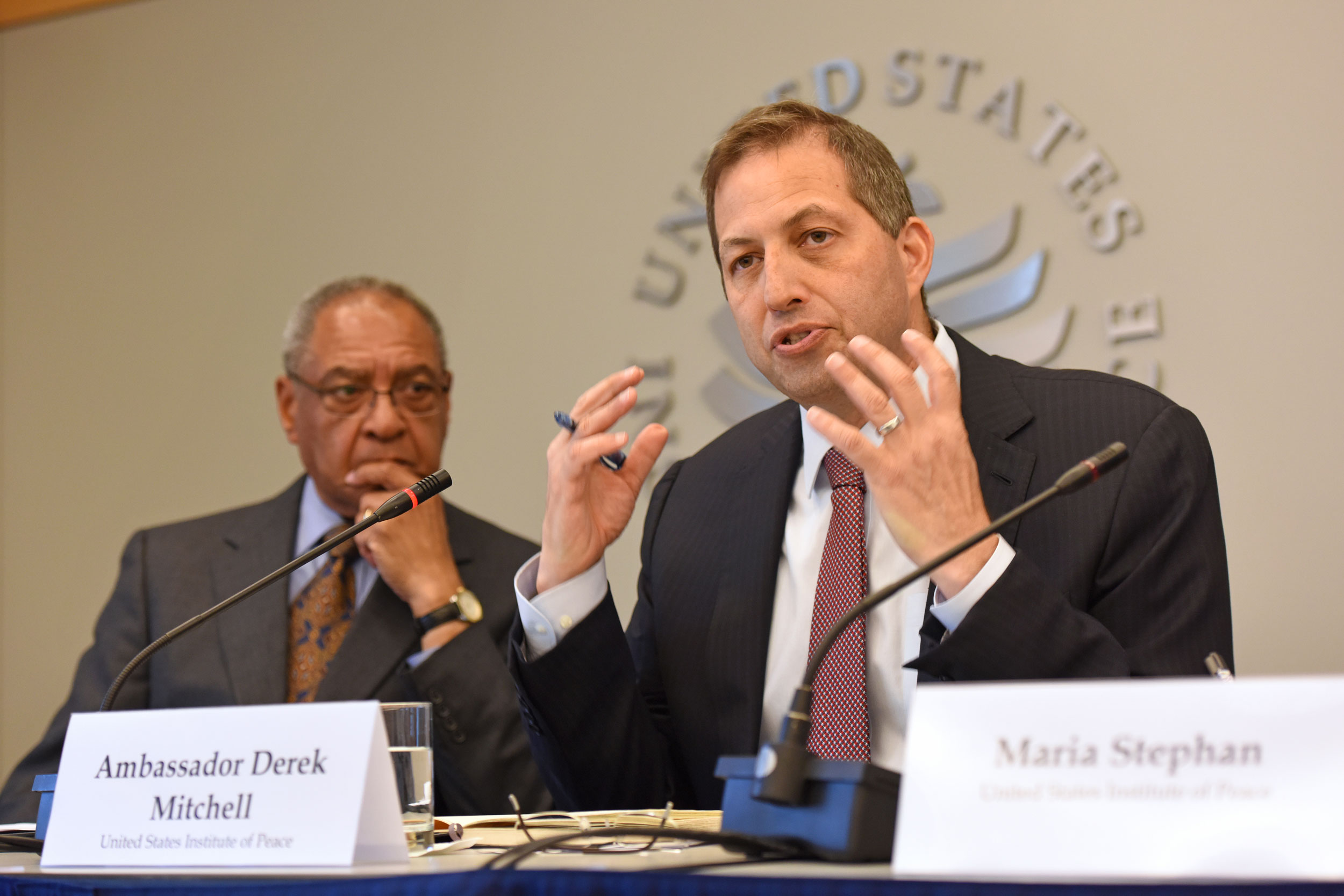 University of Virginia alumnus Derek Mitchell has focused his career on the emergence of – and threats to – democracy in Asia. Now, he is at the helm of an institution charged with promoting and safeguarding democracies around the world.

Mitchell, who graduated in 1986 with a degree in foreign affairs, served as the U.S. ambassador to Myanmar from 2012 to 2016 – America’s first ambassador to that country in 22 years. Myanmar, also known as Burma, is embroiled in a decades-long civil war and, beginning in 2016, what many are calling genocide against Rohingya Muslims in the country at the hands of the military and extremist groups.

Prior to his work in Myanmar, Mitchell served in the Office of the Secretary of Defense, focused on Asian and Pacific affairs with responsibility for overseeing the Defense Department’s security policy in Northeast, Southeast, South and Central Asia.

He serves now as president of the National Democratic Institute, a nonprofit, nonpartisan organization that supports development of democratic institutions and practices around the world, including political parties, parliaments, elections and civic groups.

Mitchell will return to UVA to discuss that work at The Presidential Ideas Festival in May, presented on Grounds by UVA’s Miller Center. The festival, hosted by alumnus and “CBS This Morning” anchor John Dickerson, will convene a large bipartisan group of former White House officials, journalists and presidential scholars.

Together, they will debate and discuss the institution of the presidency – its past, present and future – at a critical juncture, right before the 2020 presidential campaign begins in earnest. (Registration for the event is now open.)

We spoke with Mitchell last week about the festival, the ongoing violence in Myanmar, and the biggest challenges to democracy he sees on the horizon.

Q. Why did you decide to pursue a career in foreign policy?

A. I took a foreign policy class at UVA pretty early on. I was from a small town in Connecticut, didn’t know what I wanted to do, and didn’t really have a prior connection to foreign affairs. However, I really enjoyed the class, I did well, and I decided that was the direction I wanted to take.

After graduation, I went to Washington [D.C.] and got a job in [U.S. Sen.] Ted Kennedy’s office as a foreign policy assistant. After a few years, I moved overseas, which led to my interest in Asia and career in diplomacy.

Q. You left Myanmar shortly before the 2017 genocide. What did you see there that contributed to the crisis?

A. I spent many hours talking to the Rohingya people, to government leaders, Buddhist leaders and so many others about the marginalization of, and violence against, that group. We knew, historically, that there was a deeply ingrained prejudice against the Rohingya among some, even though communities had lived side by side for years. After communal violence in 2012, I feared the situation was a ticking time bomb, given increasing political violence, hostility, even dehumanization of the Rohingya by local ethnic Rakhine people. Most of the country, including the government, simply did not view the Rohingya as a part of the national fabric.

That made finding solutions very difficult. So we simply did our best to not let the situation deteriorate further, warned the government of the negative consequences of failing to address the situation quickly and justly, and engaged all sides to find a way forward. We made slight progress in some areas, but not nearly enough, and it has been heartbreaking to see the violence of recent years.

Q. What path forward do you see for the country?

A. Myanmar faces so many challenges. They need to continue to develop their nascent democracy. They need to develop their woefully underdeveloped economy. They are still in the midst of the world’s longest-running civil war – begun in the late 1940s right after independence from the British – and the ethnic and religious tensions are never far from the surface.

Those are enormous challenges, but I do believe the desire for democracy among Myanmar’s people is sincere and deep-seated. I think one of the most important steps – indeed the defining challenge – for the country is to develop a common national vision, something that can hold this very disparate, diverse place together peacefully. Historically it has held together through either military domination or colonialism. I hope the future will be different.

Q. Most of your career has focused on Asia and you have co-written several books on China’s emergence as a global superpower. What are you paying closest attention to in China at the moment?

A. The U.S.-China relationship is going through a very challenging period right now, and I think many inside and outside government are reassessing past strategies toward China, and asking whether we need to adjust our approach, including taking a harder line in defending our principles and interests.

It’s a necessary process in my view, but we also need to be careful not to create an absolutely adversarial relationship. The U.S. and China have serious differences, some fundamental differences in values and interests, but we also have intertwined economies and a lot of work we can do together on global challenges such as climate change.

In many ways, though, the ball is in China’s court. China seems to be implementing much more assertive and adversarial policies intended to undermine America’s position in Asia and globally. It has encouraged hyper-nationalist attitudes among its people, and sought to undermine free speech and other liberal principles in countries around the world through coercive economic diplomacy.

Dangerously for China, [Chinese president] Xi Jinping has also introduced policies that could slow if not reverse much of what made the country grow into the rapidly developing giant it is today. They are moving away from collective leadership, shutting off free expression and access to information that diverges from the party line, and focusing on supporting state-owned enterprises instead of private companies – all things that led to the amazing growth of the past several decades. There are reports now of businessmen voting with their feet, moving their money and families overseas to protect themselves. That is not a good sign. And if things go badly in China, it could have ripple effects not only in Asia, but in the U.S., given our intertwined economies and global interests.

Q. What are you focused on as president of the National Democratic Institute?

A. Our mission is to support democratic development around the world. We have been around since 1983 – around the time I started at UVA! Today, the institute has more than 50 offices around the world, with about 1,200 employees. For me personally, that has meant I have needed to expand my portfolio beyond Asia to understand national and regional dynamics all around the world.

Many of the world’s democracies are facing challenges right now, which makes it more important than ever that NGOs like NDI continue to build international networks of “small-d” democrats and show solidarity with those around the world who are struggling to develop their own democracies. That is our goal every day.

I should add that while NDI is an American organization, NDI does not seek to just export the American model to others, but to share a variety of international democratic experiences and allow countries to decide for themselves what model works best for them.

Q. What do you see as the biggest threats to democracy?

A. There are several. If China continues to promote their authoritarian model globally, that will be a concern, especially if they put their substantial resources behind it.

Digital technologies continue to complicate democracy as they often provide platforms for hate and disinformation to spread more widely and quickly than ever before. These technologies have shown potential to undermine authoritarianism, but too often they are being used by countries like Russia and others to sow confusion and subvert democracy.

In some countries, democracy has not delivered public goods in the way that citizens expected. Often, the old guard has figured out ways to maintain democracy in form while subverting it in fact, for instance by undermining critical institutions like free media, an independent judiciary, vibrant civil society, etc. Democracy thus gets a bad name.

Demagogues can win democratic elections by preying on fear of losing national identity, jobs or status, or on the idea of trying to recover a mythical, idyllic past. Fear is the biggest danger to democracy because it creates an opening for demagogues to offer simple answers to very difficult questions.

Frankly, the absence of American leadership in promoting democracy is also a threat to its spread worldwide. There is no viable alternative to American leadership and strong U.S. support to shore up democratic governments over autocratic ones. This failure truly puts our national security at risk.

Q. You will be in Charlottesville for the Presidential Ideas Festival in May. What are you looking forward to?

A. This is the first time I have been invited back to UVA to speak, and I’m thrilled, especially to return for the bicentennial. I love UVA, I loved my time there, I love the “second family” of friends that I made there, and I have to admit I’m pretty excited about the basketball team right now!

I’m particularly proud to take part in a discussion at the heart of UVA’s founding: education and democracy. I truly am grateful to the organizers for inviting me.

What Is the ‘4th Side’? END_OF_DOCUMENT_TOKEN_TO_BE_REPLACED