Q&A: From the Cavalier Daily to a Pulitzer Prize, in Less Than a Year 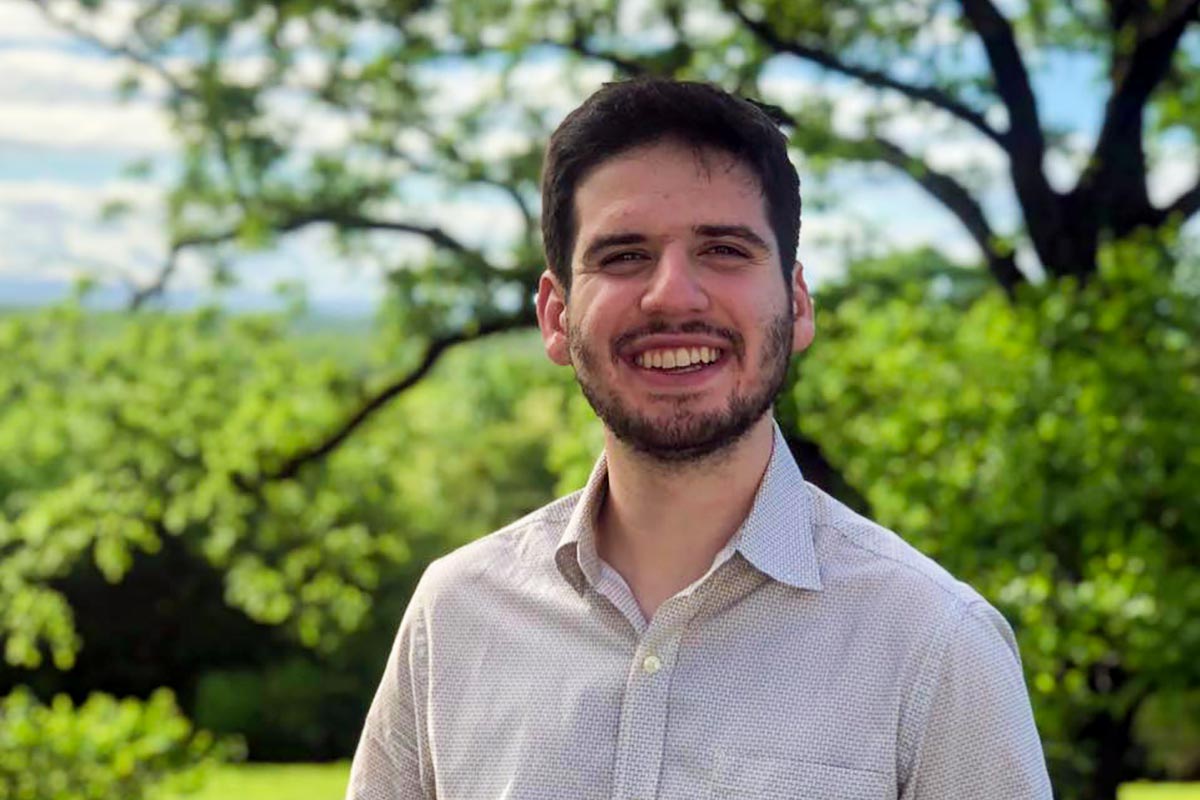 Knocking on doors in southeast Kentucky while trying, with sketchy cellphone service, to figure out exactly where he needed to be going, Ben Tobin wasn’t thinking about journalism greatness.

The University of Virginia alumnus, like so many newspaper reporters across the country, was just trying to do his job.

As it turned out, Tobin did it rather well.

On Monday, Tobin – just a year removed from his time as managing editor of the Cavalier Daily – was part of a Louisville Courier-Journal reporting team that won a Pulitzer Prize for its work investigating former Kentucky Gov. Matt Bevin’s controversial pardons and commutations.

In the breaking news category, the Courier-Journal beat out The Los Angeles Times for its coverage of a California boat fire that killed 34 people and the Washington Post for its reporting on back-to-back mass shootings.

“The UVA community should be incredibly proud of Ben’s journalistic contributions – not only to this Pulitzer-winning story, but to all of the hard-hitting, high-quality journalism he has delivered to our readers since joining our staff a year ago,” said Richard Green, editor of The Courier-Journal. “He was an instrumental part of the breaking news team. On more than one occasion, he was given tough assignments that either dealt with confirming key tips we had received or wading through public documents to find key details and report them.

“It takes a team of talented, dedicated and hungry journalists to tell a story that is deserving of any recognition, let alone a Pulitzer Prize. And the fact that Ben was part of that team with such limited professional experience speaks volumes about not only his skills, but my trust in him as a valued member of our newsroom.”

Tobin, a Fairfax Station native, came to UVA as a Jefferson Scholar. He was a political honors and media studies double-major who minored in Spanish.

UVA Today caught up with him the day after his Pulitzer win.

Q. First of all, congratulations. How does this feel? In your wildest imaginations, did you ever think that just a year out of UVA, you could achieve something like this?

A. No [laugh]. I didn’t think this would occur. The Pulitzer is such an honor, but it’s honestly not something I was ever thinking about. When we were working on the story, I knew it was a powerful piece of journalism that our community really needed, but to be honest with you, I didn’t even know that the Pulitzer award ceremony was going on yesterday, so it really hit me all at once.

A reporter from our team tweeted out something along the lines of, “My newspaper just won a Pulitzer, please excuse me for freaking out.” When I saw it, I of course got really excited – to be on a Pulitzer Prize-winning staff. But then I saw exactly what we won for, and in that moment, I just started shaking. I couldn’t believe that I was part of the team that ended up winning the prize.

“We didn’t need Gov. Bevin to tell us to dig deep and to do our job, but, at the same time, when he issued that challenge, it was definitely something we weren’t going to back down from.”

Q. Can you tell us a little bit about the team of reporters you were on? How many of you were on the team? Did the reporters come over from different beat areas to chip in, and how did you divvy up all the work? What was the reporting process like?

A. It was a quickly developing piece, and I definitely can’t take too much credit. The original story was reported by two reporters: Joe Sonka, who does a lot of political reporting, and Andrew Wolfson, who does a lot of investigative reporting. They were the first to pick up on the pardons that were issued and started looking at some of the ones that were a little more controversial.

From there, I got drafted to go down to Corbin, Kentucky, where one of the more controversial pardons took place and where one of the people lives. The person was convicted of reckless homicide in a 2014 home invasion and he had been pardoned by Gov. Bevin. But an investigation by Joe Sonka and Andrew Wolfson found that his family raised more than $21,000 at a political fundraiser in the year prior and we wanted to explore the family’s connection to Bevin further.

So I went down there to talk with the family of the person who was pardoned. They didn’t respond when I rang the gate to their estate and I left my business card, but then I spent the whole day there trying to track down the family of the person who had been murdered. After a lot of time knocking on doors, poor cell phone service and meandering around this small area in southeastern Kentucky, I was able to find the victim’s mother and then his older sister. These families were absolutely heartbroken by what happened and were confused and it was just kind of a flurry for them to process. The older sister ended up giving me a quote that we put on the front page the next day, which was “Matt Bevin can rot in hell.”

From there, everything developed very quickly and it was a really hands-on approach. More than a dozen reporters ended up chipping in. We published dozens of articles on the matter; we did a special section on some of the more controversial cases and caught up with some of the people who had been pardoned as well. And there were countless editors and designers who were involved in the process. It really was a team effort.

The Pulitzer itself was for 10 stories we wrote, but there were dozens upon dozens more that were written by so many different reporters on our staff.

Q. How did it feel, not just as a reporter, but as a human being and a citizen, unearthing all the things that you did?

A. It’s so … it’s why I got into journalism. I think the power of journalism is that it sheds light on issues that would remain in the dark otherwise. That’s why local journalism is so, so important and is what I wanted to do right out of college. I saw the impact that I had at the Cavalier Daily in providing information to students who wouldn’t have otherwise found it about ongoing matters in the University community and in the Charlottesville community. … It just felt like such an honor to be able to do my part.

It was definitely overwhelming at times, with so much information and trying to sort through it, but I knew if we weren’t doing it, nobody else would, and to me that was just an unbelievably humbling experience.

Q. As you guys began to report some of the facts, Bevin actually reached out to one of the reporters on your team and challenged him to continue finding the truth, and that if you guys did, you could win a Pulitzer. What did the team make of that at the time?

A. That was Joe Sonka. He was on a date with his wife. They have a little girl at home and I believe this was their first date in a while and he got called from a blocked number. …

As soon as he picked up the phone, he knew exactly who it was, and it was like an hourlong conversation between the two of them. They talked about a lot of different things and Gov. Bevin told him that quote, “Dig deep and maybe you can win a Pulitzer Prize.” He actually insulted him, too. [He said] something along the lines of, “I don’t know if you’re talented enough.”

We didn’t need Gov. Bevin to tell us to dig deep and to do our job, but, at the same time, when he issued that challenge, it was definitely something we weren’t going to back down from. We were already very motivated, but we were even more motivated after that to find as much information as possible and tell as many stories as possible, and to especially make sure that the voices of victims’ families were heard.

“I was electrified by it. I knew I would be cheating myself if I at least didn’t give this a try.”

Q. Given the tough times the journalism field is going through, did you have any hesitation about pursuing it as a career after you graduated from UVA?

A. Journalism was always something I had done when I was younger. My dad used to be a journalist, now he’s a media defense lawyer, but he majored in journalism at the University of Florida. He was the one who dragged me over to the journalism tent at the middle school elective fair. And then I did journalism classes all throughout middle school and high school and was editor of my high school paper. At Virginia, being a media studies major and working at the Cavalier Daily were really the sources of my journalism education.

I wasn’t entirely sure that journalism would be my career. For a while, I was thinking about going to law school or something along those lines. But I had a wonderful experience with the Cavalier Daily and then I interned at USA Today in the summer of 2018 and that really opened my eyes completely. I had just so much fun up there working for the money section. It was such a fulfilling experience. I was electrified by it. I knew I would be cheating myself if I at least didn’t give this a try.

Anybody can point you toward the financial realities that the journalism industry is going through. And it is hard. And it’s heartbreaking because I think journalism is so important. I’d be lying if I didn’t say I was a little bit nervous upon entering it. But that said, as soon as I started the Courier-Journal, with such a talented staff and such great mentors, literally, from Day One, I haven’t turned back. Even as things around us are uncertain when it comes to financial situations, I know that our mission is critical, and I’d like to think that the public will continue to support us and hopefully continue to subscribe. I want to stay in this as long as I can. … I can’t imagine not doing it.

For me, journalism is all about human relations. I’ve learned so much on a daily basis, not just from my coworkers, but from people I interview. I can’t imagine a better job, as far as spending your whole career learning people’s stories and their passions, and conveying that information to readers in a way that kind of brings those people to life. I wouldn’t trade it for the world.

Q. What would be your advice to current UVA students who are thinking about a career in journalism?

A. Don’t shy away from it. Don’t be afraid to follow your passion, and do so doggedly, do so unabashedly. Put your head down and make sure you are building as much of a clip file as you can.

The last thing I’ll say is make sure you find your mentors. At University of Virginia, I was very lucky to have taken a sports journalism class with Anna Katherine Clay. She showed me that I have what it takes to be good at this and to really enjoy it. Without her mentorship, I don’t think I would be where I am today.

Meet the New Cavalier on Horseback: She’s Eager To ‘Carry On a Legacy’ END_OF_DOCUMENT_TOKEN_TO_BE_REPLACED

Housing Changes Are a Breath of Fresh, Cool Air – Especially for Lawnies END_OF_DOCUMENT_TOKEN_TO_BE_REPLACED

Virginia Football – For All Virginia END_OF_DOCUMENT_TOKEN_TO_BE_REPLACED