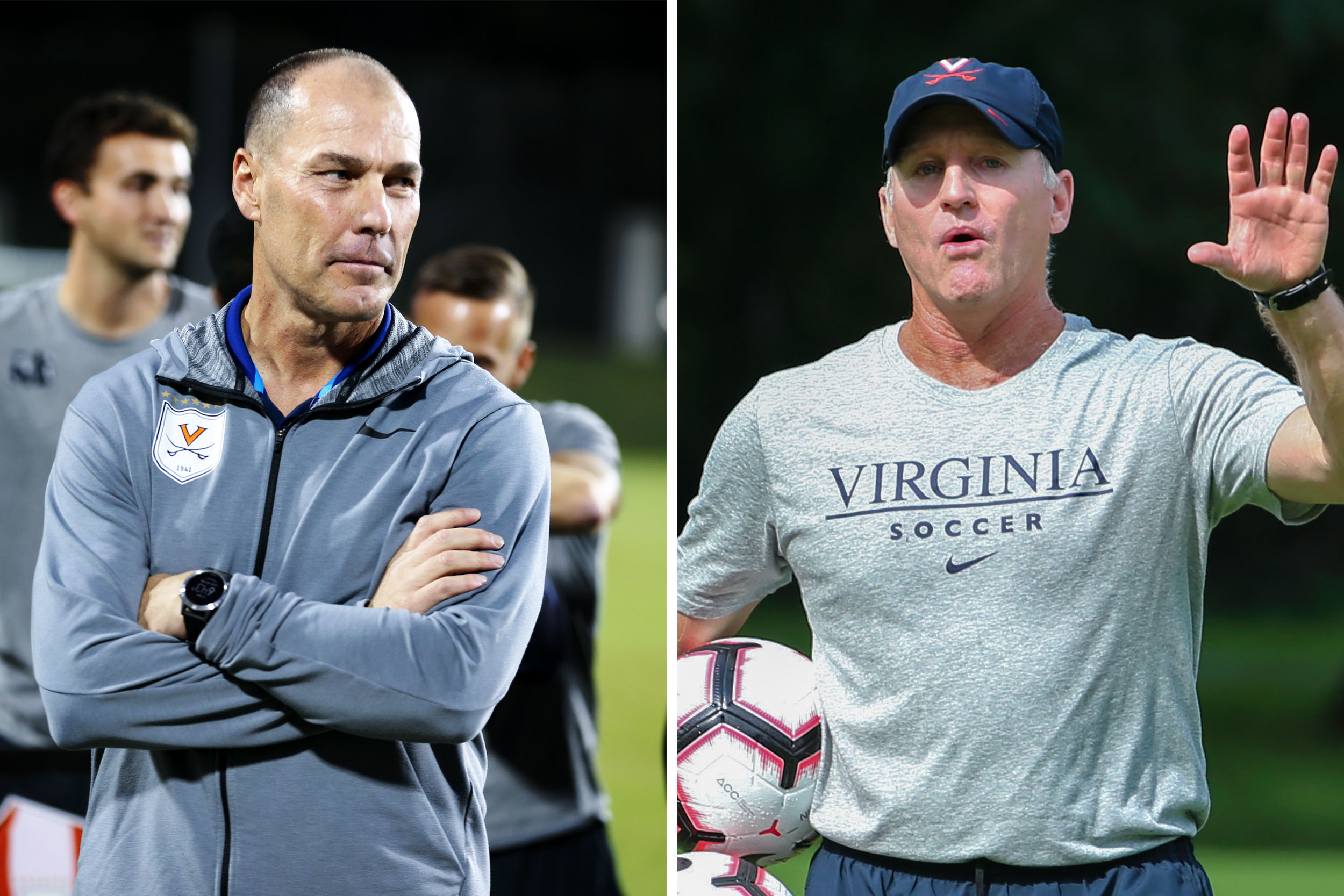 The University of Virginia women’s soccer team has already defeated Virginia Tech twice this season, the most recent triumph coming Friday in Blacksburg. This Saturday, the UVA men’s team will open its season in Blacksburg against the Hokies, whom they defeated in the lone meeting last season.

But more impressive than anything on the stadium scoreboard has been the Hoos’ performance on their academic stat sheet. Last week, both Cavalier programs were named recipients of the United Soccer Coaches Team Academic Award. To earn the recognition, teams must have posted a composite grade-point average of 3.0 or better for all players on the roster during the 2019-20 academic year.

The UVA women’s program earned the recognition for the 11th consecutive season, while it was the second straight season and third time in the last four years for the men.

UVA Today caught up with men’s head coach George Gelnovatch and women’s head coach Steve Swanson to see how their teams have been navigating this year’s unusual season, played in the midst of a pandemic.

Q. How have your teams been handling COVID-19 protocols so far?

Steve Swanson: I think the players deserve an awful lot of credit for maintaining their discipline and doing what they need to do in order for us to not have COVID impact our season the way it potentially could. I think there’s a real appreciation for where we are and how far we’ve come. I’m always proud of the team, but even more so now just because they’re managing their time as well as they possibly can and we’re progressing as a team.

George Gelnovatch: I would say the same thing. We’ve been here since mid-July and have been a model team. I’ve asked them to do a lot of really hard things, a lot of hard things for an extended period of time. More of them is probably being asked than the [general] student body, to be honest. They’re getting tested three times a week. Because of the implications of a positive test, I think everybody knows what’s at stake. With the season being condensed, if you miss three or four weeks, you’re out. I think that’s been a driving force with a lot of our teams.

Q. As a coach, how gratifying are accolades like the United Soccer Coaches Team Academic Award last week?

SS: One of our goals every year is to obviously win an ACC and NCAA championship, but another is maintaining a team GPA above a 3.0. I think the players really take a lot of pride in that, and I think we all want to see the student-athletes get as much out of this institution as they can.

The ability to balance the demands of Division I soccer, but also the demands of an academic institution like the University of Virginia – there’s a lot of pride that goes into that. So we’re very happy about that. It’s something that is part of our fabric, part of our makeup, part of our culture.

I always tell the players that is a world-class institution and that you only have four years – you want to squeeze as much out of it as you can. And I think our players do that on a daily basis.

Q. When it comes to your players achieving that perfect athletics-academics balance that you strive for, what have been your biggest keys to success over the last several years?

GG: You have to give a lot of credit to our academic advising people here. It’s a full-time group headed up by Ted White and Heather Downs. They have a lot to do with it. All of the things that are in place here at UVA to have students be successful is incredible. The academic support that you get here from the athletic department is just great. It’s a big part of the success.

But then, this place, the University of Virginia, is just special – so those young men and young women that we’re looking at are special, too. They’re achieving at a high level to be in our program. You have to be the elite of the elite on the field and also be elite in the classroom. That generally gives you a pretty good person. … I tell my guys regularly that my first job is to have you be successful in the classroom and graduate. That’s my first and primary job here.

SS: I think the first thing is to acknowledge our admissions office. They do a great job of evaluating all the students.

But our student-athletes deserve a lot of credit. We go out and recruit players we think can help us in the program, but we also try and recruit players who are a good fit here. That means that they’re motivated not just by soccer, but by getting the best possible education they can. Those go hand in hand.

And our faculty has shown amazing flexibility in being able to adjust to some of our players; for example, when they leave for the national team to pursue their dreams of playing on a World Cup team.

And the people who work within our academic resources have the student-athlete’s best interests at heart. They don’t just get to know them as athletes, but as people, and help push them in the right directions.

Q. In terms of this season, what have been your biggest challenges in helping them achieve that balance?

GG: The virtual learning, some guys have more challenges with it than others. I don’t know in the end that it’s a big challenge.

Logistics-wise, guys forget to click off on class attendance. After the class, you’re supposed to check a box and write a couple comments so that when we go back to check, we know you were at class. Well, sometimes they forget and it comes back as I had like six guys miss classes today [laughing]. And that’s just not the case – nobody’s missing class.

But it’s been little things like that. It’s just been used to getting used to some of the protocols.

SS: I couldn’t imagine coaching through Zoom. I think there are unique demands and circumstances that have made this year very challenging for the professors and for the students. For us to be able to meet in person in our classroom, which is the field, is huge for our players. It just gives them a release.

It’s always given them a release, but even more so now since they’re behind their desks looking at a video screen a lot of the time.

Q. During these crazy times, many people like to look for silver linings. In terms of your team having to shift its schedule around and things like that, can you think of any?

GG: Our team last year was arguably one of the best in the history of our program. That team was just a special group of guys. You see Henry Kessler starting for the New England Revolution and Daryl Dike starting for Orlando City and Joe Bell starting for Viking, which is a first-division club in Norway. It goes on and on.

My point is that we lost those guys, and we picked up a bunch of transfers and grad transfers and international players. I think there were 13 new guys in this class, and so what I needed was time. And if I was ever going to get some time, this was the perfect time. We’ve gotten a lot of time to see what we have and to get fit and try some different things rather than have just a two-week preseason and jumping into your fall season. That’s been a little bit of a silver lining.

SS: I think there are a lot [of silver linings]. Even though we’re going through a lot in order to compete, it’s nothing like the alternative, which is not playing and not being together.

I know, as a coach, I appreciate our players even more so. Not that I didn’t before, but they’re such good people to be around. Sometimes we all tend – it’s human nature – to take those things for granted. But when they’re taken away from you for months on end like they were, I think those things you respect even more when you get back together.

Q. As a coach, can you do anything to prepare the players for the fact that there won’t be any fans in the stands and they won’t get that typical adrenaline rush that they usually do during games, especially ones at Klöckner Stadium?

GG: I don’t know. That’s a good question. On Saturday, they’ll be pumping in crowd noise. I don’t know about the dynamic, but what I do know is that the other team has to deal with it, too.

I also think that at this point guys are champing at the bit to be in a stadium rather than a practice field – even if the stadium’s not full.

SS: The fact that our administration has allowed a small number of friends and family – that helps. I think it’s always good to play in front of fans. But in the absence of that, we’re just excited to be out there competing, having the chance to do something we love.