Q&A: Former Two-Sport Athlete Turns Her Attention to a Special Cafe in Charlottesville 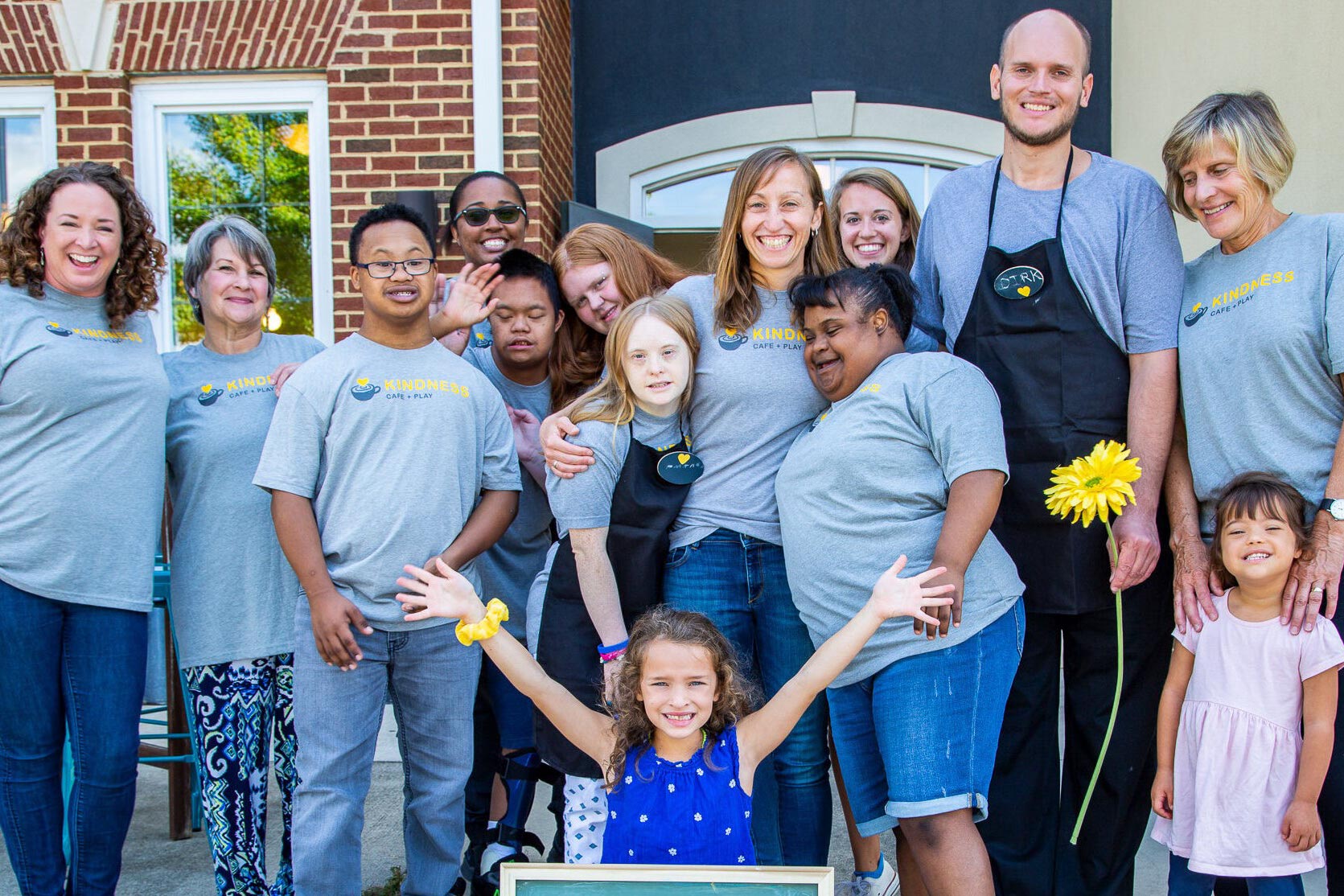 “When I was younger, I was focused on being a super-achiever,” Kishore told her audience when she spoke at the Tom Tom Festival in Charlottesville last spring.

Her priorities changed as she grew older. In 2010, after moving back to the Charlottesville area, she met fellow UVA graduate Kris Kishore, a teacher at Charlottesville High School. They married in the spring of 2011 and together embarked on a new adventure.

“It all happened fast,” Katie recalled.

In the spring of 2012, their first child, Mira, was born, and another daughter, Kiran, followed two years later.

But this was not a time of unbridled joy for the family. A week after Katie learned she was pregnant with Kiran, Kris was diagnosed with cancer. He died April 25, 2014, two weeks after Kiran was born.

At the age of 34, Katie was a widow raising two young daughters, one of whom, Kiran, has Down syndrome.

“Some people probably lead the life they expected to lead,” Kishore said recently, smiling. “I’m certainly not that person.” 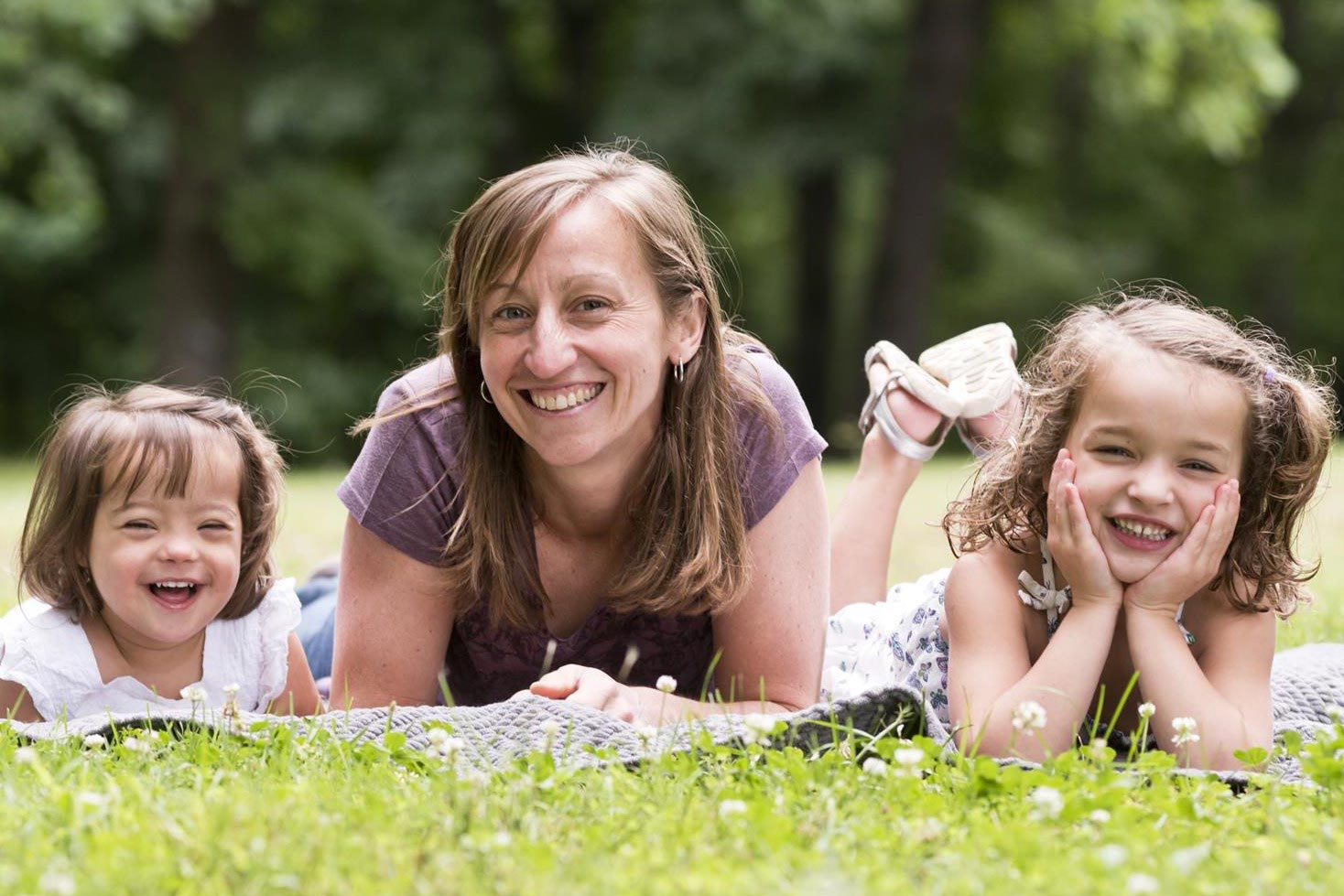 She no longer teaches, but Kishore, whose sister Erin Tracy is a psychologist at UVA, remains busy. In addition to raising her daughters, she’s opening a non-profit coffee shop named the Kindness Cafe + Play, whose mission is to provide meaningful employment for adults with cognitive disabilities. Located inside the Brooks Family YMCA at McIntire Park, it’s scheduled to open this spring.

“In this world that often feels like a race, generally speaking, people with cognitive disabilities are not concerned with finishing first,” Kishore said at the Tom Tom Festival. “They are less likely to seek status. They are less likely to seek power and tend to care more about relationships: the giving and receiving of love. They are more likely to live in the now and be uniquely concerned with how you and I are doing in the present moment.”

A 1997 graduate of James River High School in Chesterfield County, outside Richmond, Kishore came to UVA to play soccer for April Heinrichs, then the head women’s coach. After her first soccer season, however, Kishore was invited to join Debbie Ryan’s basketball team, which had lost two guards to injuries, and she remained a two-sport athlete for the rest of her undergraduate years.

As a senior, Kishore was a co-captain in both soccer and basketball. (She played her final year of college soccer for Steve Swanson, who succeeded Heinrichs after the 1999 season.) She was a three-time member of the ACC’s academic honor roll.

Kishore, a midfielder, totaled 18 goals and 13 assists and started 84 games in soccer. She was a second-team All-ACC pick in 2000 and later played professionally for the New York Power in the Women’s United Soccer Association.

Kishore, 40, is the latest former UVA student-athlete to be featured in a VirginiaSports.com alumni series. Our conversation follows.

Q. How did you find the strength to move on after losing your husband?

A. It’s a pretty fuzzy time of life, in terms of what actually happened. I know I was overwhelmed with grief, and with responsibility. Fortunately, we had a ton of support. I think having to raise these two little kids and to remind myself that they deserve a joyful experience was helpful.

And they’re awesome. My girls are fantastic. We have a great life together. What I often say is our life will never be what it would have been with Kris, and I recognize that. At some point the girls will recognize that. They might already. But we have a fantastic life. We live in a great town with fantastic friends, wonderful family, and we have lots of fun.

Q. How long did you work as a teacher?

A. Six years total. Two in Charlottesville, and then when Mira was born [in the spring of 2012], I stopped teaching that summer. I mostly stayed home but also worked part time for Girls on the Run, a non-profit that runs an after-school running program that doubles as character education.

And then as Girls on the Run grew in Charlottesville, my hours were extending, but they were extending in the afternoon, which didn’t make sense for me. My kids were finally starting to go to school, and if I was going to work part time, it needed to be in the morning. So I stepped back from Girls on the Run. I’m still on the board there, still like to be involved, but it didn’t make sense for our family.

Q. What has having a child with Down syndrome taught you, and how has it changed you?

A. Kiran has taught me a lot in the last six years, and I’m excited for all the learning ahead with both my daughters. My infinite and unwavering love for Kiran as a person with Down syndrome has shifted how I view the world and likely has shifted how I view myself. It doesn’t feel like the world totally understands Kiran, how amazing she is and how much she brings to the rest of us each day. As a result, I question my values more often and am more thoughtful about how I view others and how I treat others. This idea – what I’ve learned from having a daughter with Down syndrome – is exactly why I’m starting Kindness. Typically developing adults can learn lots from our peers with cognitive disabilities.

Q. What was the genesis of Kindness Cafe + Play?

I’d stopped working at Girls on the Run that fall, 2016, so I wasn’t working at the time, and it just kind of stuck with me. So I just started talking about it, and then I started taking notes. That spring break, my daughters and I grabbed a friend and her new baby, and we took spring break in Wilmington to check it out. … It’s an easy mission to get behind.

Q. What about seeing Bitty & Beau’s in Wilmington inspired you to want to launch Kindness in Charlottesville?

A. Being at Bitty & Beau’s was inspiring, and it was a lot of fun. There were a few specific moments that felt powerful, but mostly seeing it in action allowed me to envision a similar space in Charlottesville. In the end it’s just a coffee shop with a specific set of employees and a fantastic vibe. It quickly became clear to me that Charlottesville would both support this Cafe and benefit from it.

Q. How did you decide on Kindness as the name for your café?

A. I think first and foremost it’s a reminder to the community of what matters in this world. I certainly have been reminded of that as I’ve lived this particular life, and that includes the death of a partner and the birth of a child with Down syndrome. And I think personally and for me and my circle of friends and family, it absolutely reminds us of Kris.

The girls and I love that it starts with a K. I got an email the other day from a woman whose kids Kris had taught, and she told me how excited she was we were doing this and that Kris was kindness personified.

Kris and I were most committed probably to women’s soccer, together. He was also committed to football and basketball, and I’d tag along at times. Now the girls and I go to a variety of things, based on who else is going and when the games are.

Q. It’s not easy to launch a business. How has that gone?

A. Overall, it’s been fantastic. We have gotten a great response from the community, and we are really lucky in that our community partners have been really generous. (These include Grit Coffee, Arc of the Piedmont, Breadworks, Innisfree Village, Building Goodness Foundation and YMCA.)

Q. When Kindness opens, will you be on site during business hours?

A. Initially, absolutely. The other thing that’s gone really well is I hired a director of operations. Her name is Reagan Stillerman, and she’s fantastic. She’s been a special education teacher for close to 20 years, and just a great personality and hard worker. So she will be the Cafe manager. She’ll be in charge of all operations, inventory, employment, all those things.

To start, we’re just going to be open 7:30 to 11:30 a.m., and then grow from there. We’re a little limited. We can’t use [the YMCA’s] kitchen, because it’s not commercially certified. So we don’t have a kitchen. We actually don’t even have a second room, which most restaurants and cafés do, so it’ll be more like a coffee shop and snack bar. But we hope that, in the next couple years, we’ll keep this location and then have a second location that allows us [to do more].

Q. Have you maintained strong ties to UVA athletics since graduating?

A. Once I moved back to Charlottesville, yes. When I moved away, no. I was in outdoor education for a while, I was in education up in New York, and those years I wasn’t connected to the University very well. But once I moved back [in 2010], yes. Kris was an enthusiastic Wahoo, and all his friends certainly care a lot about UVA athletics. And we live close to campus. It’s fun to go to games.

Q. UVA hasn’t had many two-sport athletes. What was that experience like?

A. I loved it. I slipped into it. I had decided, “I’m just going to play soccer. I’m a better soccer player. It’s going to be a more manageable college experience.” But when Debbie invited me to be on the team, I couldn’t imagine saying no.

Because I moved back to town, I think it’s stayed closer to my heart than some, because I have teammates in town, Debbie’s in town, Steve’s in town, and my girls get to go watch those games. And I get to share my experiences with them, and before Kris passed away, I got to do the same thing with him.

I think it’s more powerful in my life now than it would have been otherwise, but I think most of my teammates would agree it was a great time of life. It was a lot of fun and just a lot of good people.

A Year We Will Never Forget: 2019-20 in Review END_OF_DOCUMENT_TOKEN_TO_BE_REPLACED

‘What Will You Carry With You?’ Remarks From UVA President Jim Ryan END_OF_DOCUMENT_TOKEN_TO_BE_REPLACED