Q&A: ‘Girls Who Code’ Founder Is on a Mission 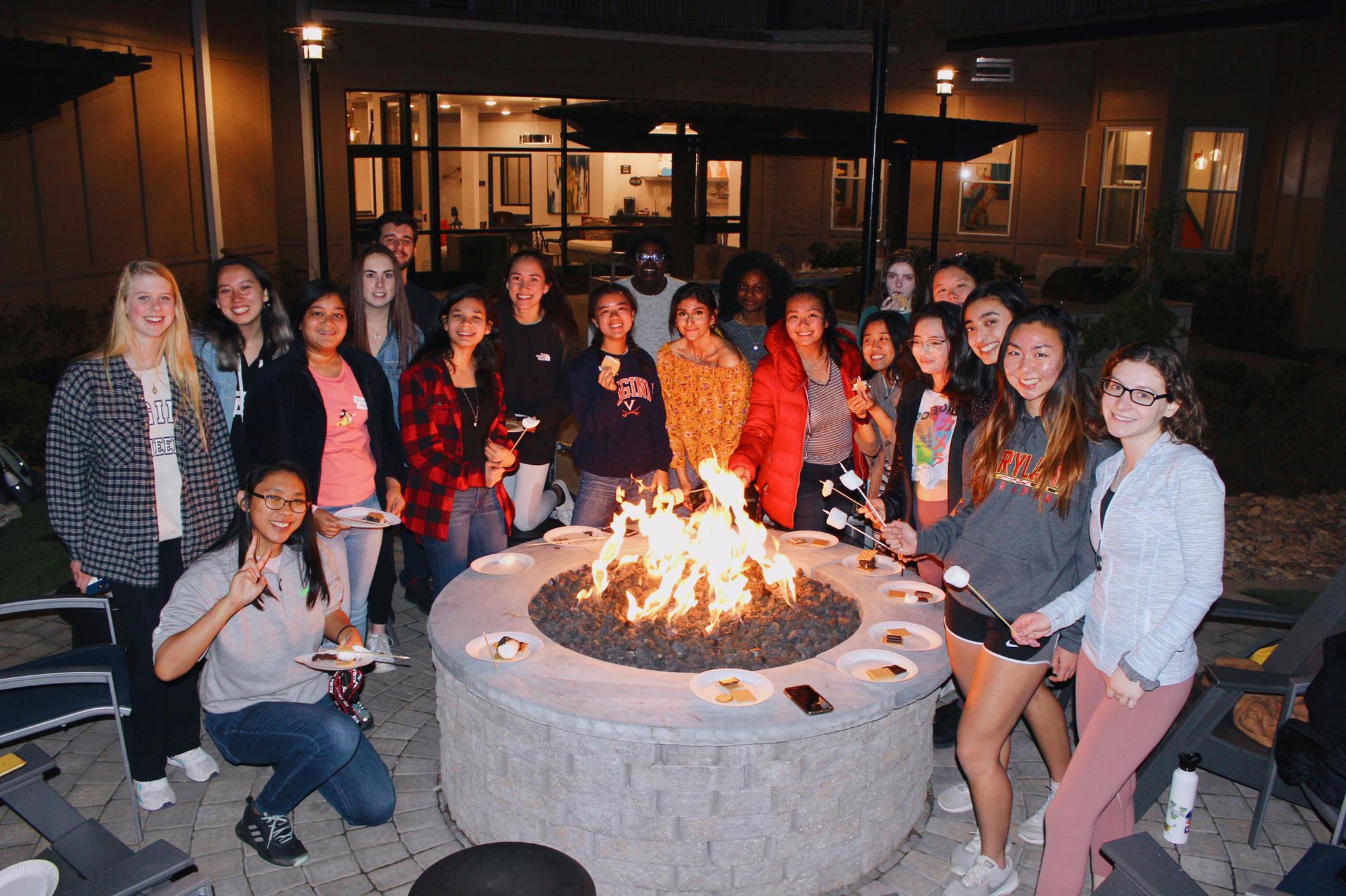 During her time on the University of Virginia’s Grounds, Mara Hart had joined a couple of student organizations that she really liked, ones in which she had made some great friends.

However, Hart knew deep down that she hadn’t really found her niche yet.

After studying abroad in 2018, Hart realized that if she didn’t immerse herself into something that she was truly passionate about, she might run out of time to do so.

So last February, just before the start of the pandemic, the computer science major from Virginia Beach founded “Girls Who Code at the University of Virginia.”

“Though there are great organizations on Grounds, focusing around similar things, I never felt like they were marketed toward me,” said Hart, who will graduate from UVA’s School of Engineering in December. “I wanted to be a part of an organization whose core mission was to be a community for a more gender-diverse field. Organizations oftentimes focus on professional development, which we do as well, but we ensure that we hold community up as an equal value.”

UVA Today caught up with Hart and Girls Who Code Vice President Danielle Zevitz, a third-year student from Stafford, to learn more.

Q. How do you describe Girls Who Code? Is it a club? And what has been the School of Engineering’s role in it? Have there been any faculty members who have played key roles?

MH: Officially, we’re a contracted independent organization. Colloquially, we’re a club. But personally, we’re a community. We strive to build a social network around not just young women in computer science, but anyone who codes, whether it’s a part of their major or just a hobby. We have a Discord server of more than 250 members that features chat rooms for different classes, an opportunity bulletin board for professional advancement and voice channels for members to just say “Hi” and even game together. 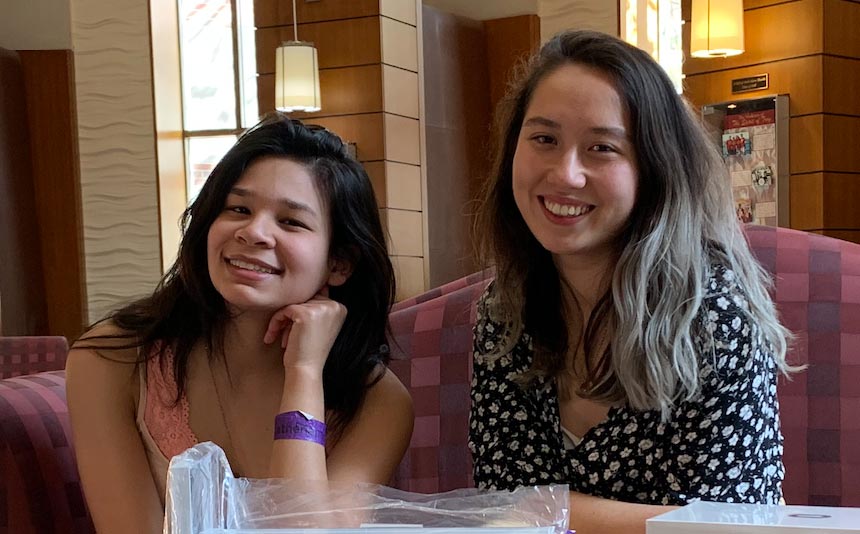 Since the beginning, [UVA Engineering] has been an integral support. Not only did Dean Craig Benson forward our initial marketing out, leading to an overnight gain of 200-plus interested members, but professor Nada Basit has also supported us through announcements and advice whenever the situation has arisen.

GWC at UVA has also created a close connection with the School of Data Science with Director of Admissions and Financial Aid Patti Edson, and Chief of Staff Arlyn Burgess championing for Girls Who Code and supporting us at our inaugural hackathon, “Girls Hoo Hack!”

Q. How has the pandemic affected operations and goals?

MH: When we started GWC, it was February, a short month before schools closed down. We had plans for fun weekend activities and bonding events between members, but quickly had to rethink for the health and safety of our members.

Fortunately, due to the nature of programming, we’re able to host educational workshops just like we would in person and are working to make our social events as interactive as possible. We’ve held front-end web development workshops and internship panels and played “Jackbox” and “Among Us” all over Zoom.

Q. In terms of the number of women studying computer science, do you know how UVA ranks?

DZ: As of last year, UVA ranks sixth among public engineering schools in the country for the most women getting a bachelor’s degree in computer science, with only 29.5% of our program being females. This beats the national average of 18% female computer science graduates. A lot of Girls Who Code members, including me, felt as they moved into more difficult computer science classes, they found there are not as many females in their class. Girls Who Code allows them to find that community.

Q. As a woman in a male-oriented field, are there any stereotypes that really bother you or frustrations you sometimes experience?

MH: As a young woman working in computer science education, I’ve experienced a mix of dismissal, yet uncomfortable interest. I’ve worked at a start-up where I was the only young woman on the intern team and would watch my boss lift his phone when I started to talk and place it down when I stopped, a routine that my male counterparts didn’t experience. I also host technical workshops for people all over the world and get private messages about my looks or personal inquiries, rather than the educational content we’re going over.

Thankfully, I’ve also worked at companies that cherish the culture that having a diverse mix of genders can bring.

Q. You’re hoping to start a mentor program – what’s the status of that? Who have been your mentors at UVA?

MH: We’re currently building our mentorship program and hoping to release more details this semester. This past year has been a stressful time for everyone – mentally, academically and professionally. Mentorship programs are a way to introduce a support system and a friend to lean on during these times.

I remember meeting my first computer science mentor before even stepping foot on grounds. At an incoming students/alumni mixer, I met Richard Dizon [a 2018 UVA Engineering grad] and realized that he was one of the first people I met that had gone through my exact degree program! At the end of the event, we exchanged emails and he sent me a great guide to the first few months at UVA and because of him, I was able to tackle the Career Fair and learn more about my opportunities that other first-year students hadn’t even known of.

Q. How has the word “code” kind of evolved in recent years? Because I think when some people hear the word, they just think of someone sitting in a dark basement glued to a computer monitor working on an extremely complex software program or something. It’s really much more than that, right?

MH: Even I had the stereotype of a man who sat in the dark and coded without talking to anyone with their head down and numbers all over their screen. Now I realize that coding is a vast field, but overall has a level of collaboration that is growing to this day. Programmers nowadays need to know how to communicate with their team, their client, and their peers. In an open-source world, programs will take code changes from people all over the world, building products like Mozilla Firefox or Linux Operating Systems.

The barrier of entry to code too has vastly decreased; people can create functional websites with just HTML and CSS, or even find no-code solutions that allow them to build custom technological solutions. Outside of having resources and tutorials for various languages and softwares, programming has leaked into all career fields, such as using virtual reality to improve senior living community residents’ quality of life or building a website for a small business.

DZ: There is a lot of cooperation with code. Most of the technology that you use was developed by teams of 10 to 100 people! It is very important that your code is well-communicated to make sure that the code can continue to be developed by other developers after the original developers are gone. There is also a lot of communication with clients to make sure that we are producing what is best for them.

Q. What are some types of activities Girls Who Code members take part in, or you’re hoping they can in the future?

MH: Girls Who Code members can expect workshops and panels that feature professional development and technical skill-building from our members or even companies like Microsoft, Capital One and HSITAG. We also have events that ditch the code and focus on getting to know everyone, whether it’s a game night or social hour. We also host an annual hackathon called “Girls Hoo Hack” in October.

A hackathon, for anyone who doesn’t know, is an event (in our case 48 hours) that awards the best technological solutions to everyday problems. This can either be a wireframe (a designed concept that doesn’t feature code), an educational website, or anything else a team can accomplish in just one weekend.

Besides this competition, hackathons also feature workshops that are designed to help teams find a piece of technology that they can integrate. Something unique to our hackathon is our weeklong, beginner-friendly Jumpstart program, designed to slowly introduce beginners to the hackathon flow and ease any nerves they may have.

Q. I imagine a bunch of coders congregating has led to some pretty awesome brainstorming sessions. Have there been any cool ideas that have come out of them that you can share?

MH: My favorite place for brainstorming is at hackathons. At Girls Hoo Hack 2020, we had a few innovative ideas that focused on struggles that many women and girls face. Notable creations were an educational website about periods and what a young girl may be experiencing as she goes through puberty, as well as an app that analyzed yoga positions to give feedback in a way that allows the user to practice in private, building their body confidence.

Q. What are your current and long-term goals for Girls Who Code?

MH: Right now, my long-term goal is sustainability. After this semester, I’ll be stepping down as president and am working to build documentation and organization to ensure that the next executive team to come will be able to retain our membership while keeping our core mission close to their hearts. This core mission includes educating our members with industry-relevant skills and building a community that members can rely on.

As for more short-term, we’re hoping to build our relationship with companies, as we’re a new organization and find more great opportunities to bring to our members.

Q. How can students reading this get involved?

MH: Don’t be tricked by the name! We welcome any members who are interested in building a more gender-inclusive tech community. On our executive board, we’re happy to have non-computer science majors and men alike. Programming spreads across all different career paths and we want an organization that represents that.

If anyone would like to join, the best way to get involved is by joining our Discord.

If there’s anyone who isn’t sure if GWC is for them, we’re happy to take any feedback and see how we can grow and accommodate more members’ interests. By posting them in our discord, the executive team works together to find a way to incorporate that in our plans, as always, our organization is for YOU!