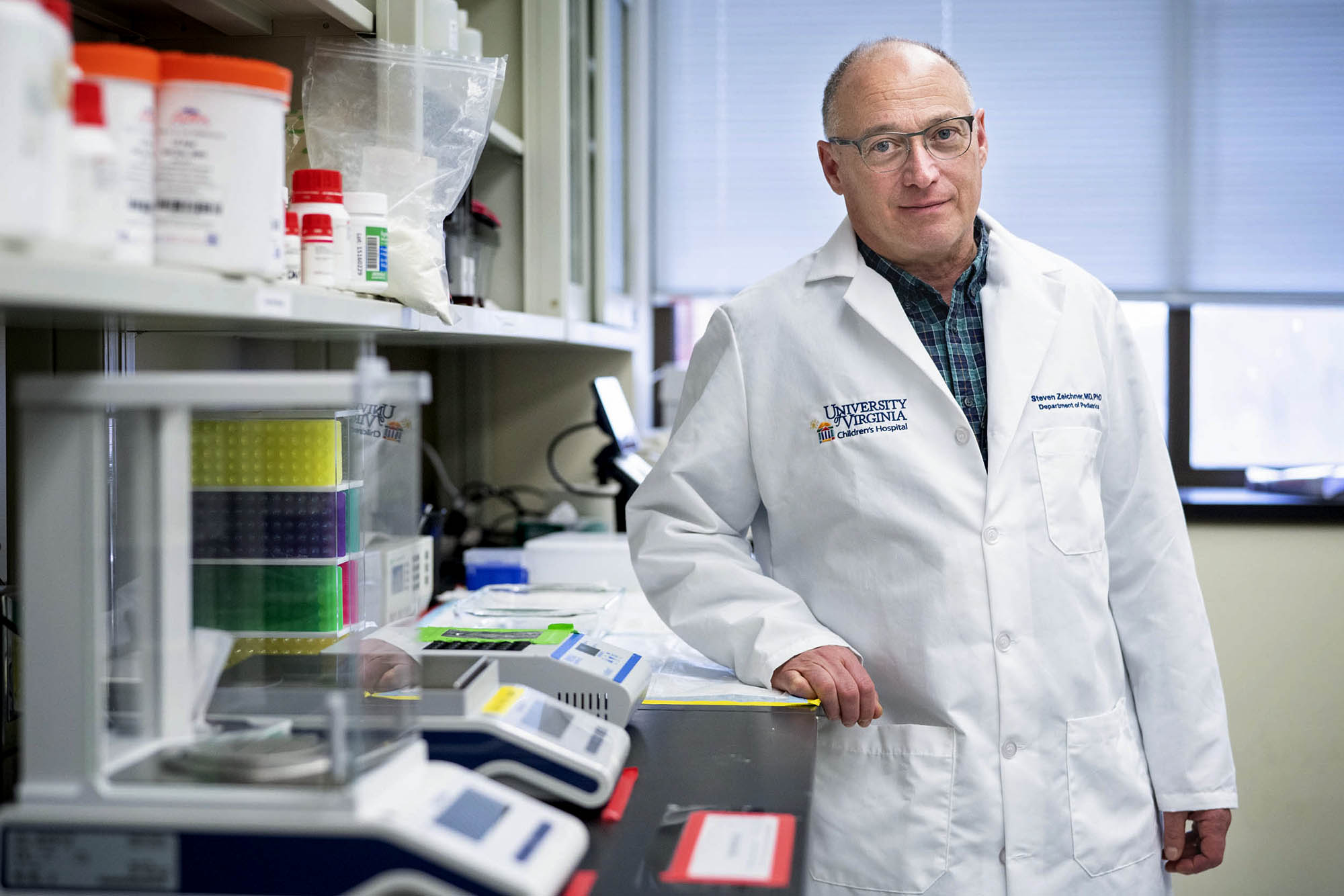 Dr. Steven Zeichner, head of UVA Health’s Division of Pediatric Infectious Diseases, is working on a method to produce a low-cost vaccine for COVID-19. (Photo by Sanjay Suchak, University Communications)

As the COVID-19 pandemic continues its spread, harming and hampering lives and economies, one thing is clear: we need a vaccine.

Dr. Steven Zeichner, a University of Virginia infectious diseases specialist and researcher, is responding to that challenge. He is using existing technologies and techniques to develop a unique vaccine-making method that he hopes will not only rapidly produce a safe and effective vaccine, but one that is low-cost and highly manufacturable.

Here, he discusses vaccines generally, and his particular approach to vaccine development.

Q. When do you think an approved COVID-19 vaccine will become available?

A. That’s still an open question. A year or so from now would be wonderful, but that would be very fast for a new vaccine because there are a lot of things that can go wrong in development. I would be delighted to see it happen.

It would need to first be widely tested in Phase III clinical trials, and then, if proven safe and effective, would have to be approved by the Food and Drug Administration. It then would have to be produced in sufficient quantities to elicit immunity in a significant fraction of the population.

Q. What are the steps involved in creating a vaccine?

A. First, we need a vaccine that can elicit an appropriate immune response in an animal.

If that works, then we do a Phase I study in a small number of people to see if they, too, demonstrate immunity with no evidence of a safety problem.

Then a Phase II study is conducted on a larger number of people to see if there’s more evidence of safety and efficacy.

Next, a large Phase III study is needed, where you immunize many, many people and see if the vaccine actually protects them from getting the infection. If so, that would lead to drug approval and production for the general population.

In a pandemic situation, there are groups trying to accelerate this by combining phases, which is a reasonable way to go when faced with a crisis. But until we get the Phase III data, we don’t actually know whether the vaccine is going to be safe and protective, with no adverse effects.

Q. Once a vaccine is developed and approved, can we produce enough doses for everyone?

A. That’s another major open question, because even the vaccines that are in the most advanced stages of development – some already accelerated to Phase III – may still require a year to produce a billion doses. With many vaccines, you need more than one dose to complete a course of vaccination.

So depending on how many doses are needed for an effective immune response – perhaps two or three per individual – a billion doses might immunize the United States, but the U.S. is only about 5% of the global population. A billion doses are not nearly enough to immunize everybody in the world.

Q. What about affordability? Will it come down to how wealthy you are and what nation you live in?

A. My personal ethical view is that everyone should be able to get a vaccine. But who’s going to pay for that – individuals, health insurers, governments? Some vaccines cost several hundred dollars for a full course, making them out of reach for many people in the U.S. and many more around the world. So, a vaccine costing hundreds of dollars is worthless for most people.

Q. Considering the hurdles involved in developing, testing, mass-producing and distributing a COVID-19 vaccine, is it possible that so-called herd immunity could happen first, providing a certain amount of large-scale population protection?

A. Absent a vaccine, I think this virus is going to be with us a long time. Epidemiologists suggest it might take 50% to 60% of the population becoming immune to stop the widespread proliferation of disease in the population. That could happen, but then many people would get sick and die along the way.

We think now that when you’re infected with the virus, you have some level of protective immunity. But we still don’t know that for sure, and we don’t know how durable the immunity is.

Q. If this is with us for a long time to come, do you think society will adapt, such as routinely wearing face coverings when out?

A. I think so. It seems that wearing face coverings is a prudent thing to do. I’ve traveled in East Asia quite a bit, and even before COVID-19, wearing masks was completely normal there. This may even explain why the epidemic wasn’t as serious in Japan as it might have been, given that the country wasn’t quite as aggressive in shutting down its economy as other nations.

Q. How is your own vaccine research progressing?

A. Some of the DNA-based vaccines that are being worked on by companies require dedicated factories that employ previously unused technology to produce the vaccine. This presents a problem for scaling up production.

The goal in our UVA lab is to come up with a vaccine that could be extremely inexpensive, that could be produced in existing factories using established technology and manufacturing processes, and that could be rapidly scaled up.

So, using genetic engineering techniques, we’re putting a protein derived from the COVID-19 virus on the surface of a bacterium that has had a large fraction of its genes deleted, which we have found enhances immunogenicity, and growing and inactivating the bacteria for use as the vaccine itself. The idea is that the immune system will react to the viral protein on the bacteria, creating immunity to the actual virus.

It’s very inexpensive to do this, and offers a new way to get around the costly problems involved in most vaccine development – the need for expensive precursors, and specialized manufacturing facilities. Making vaccines this way is easy and inexpensive. Several inactivated bacterial vaccines are approved and in production globally. Working with industry, we could likely make billions of doses quickly, for less than a dollar a dose. Scaling up should be well within the capabilities of existing technology.

Right now, we are engineering the bacteria. I’m hoping that in the next couple of weeks we’ll have a good batch and can begin immunizing some animals and looking for an immune response capable of inactivating the virus. And then, if it works and appears safe, we could go into Phase I, and test it with a small number of people. We want to move things along as quickly as possible.

This all depends on money, of course, and we are very grateful to the University for giving us new funding from the Manning Fund through the Office of the Vice President for Research and support from the Coulter Program for a follow-on variant of this technology. We’re seeking additional funding from UVA, the National Institutes of Health, and perhaps the commonwealth and partnerships with industry. We could even consider creating a startup company.

Q. Were we prepared for this pandemic, and will we be ready for the next one?

A. We were not well-prepared. The government was not spending the money that was needed to prepare for a pandemic or to respond to one. If you think about what can really threaten the country, threaten the economy, threaten national security, threaten the health of the people in the United States and the world, the investment we make in handling a pandemic is small compared to the money we spend on so many other things.

This is not going to be the last pandemic, and I don’t think we are any better-prepared now than before. With 7-plus billion people on the planet, and diseases crossing over from animals to humans, this will happen again. In the last 10 years, we’ve seen SARS, SARS-CoV-2, MERS, Ebola, Zika and other emerging infectious diseases. COVID-19, with a mortality rate of about 1%, is not as bad as it could be. What happens if a disease emerges that causes 10% mortality?

A. All knowledge is useful, and putting money into getting new knowledge is key. Things that are not obviously useful today may prove to be critically important tomorrow. The tests now available for COVID-19 are based on a process called PCR, or polymerase chain reaction. This is a way to amplify DNA, or DNA made from the RNA of a virus. This test for the virus depends on technology developed from very basic research conducted decades ago on strange bacteria from the hot springs of Yellowstone National Park, just because they were unusual and interesting.

I’m sure a lot of people at the time would have thought it was a waste of money to fund some scruffy microbiologist who was investigating a microorganism able to live in the extreme environment of a hot spring. It was pure research. But if that work hadn’t been done, we would not have a test for this coronavirus today, or for so many other diseases. What is obscure now could be essential in the future for curing disease.

What Is Biotechnology? Where Is It Headed at UVA? END_OF_DOCUMENT_TOKEN_TO_BE_REPLACED