Q&A: Jia Tolentino on Journalism, Career Tips and the Worst of the Internet 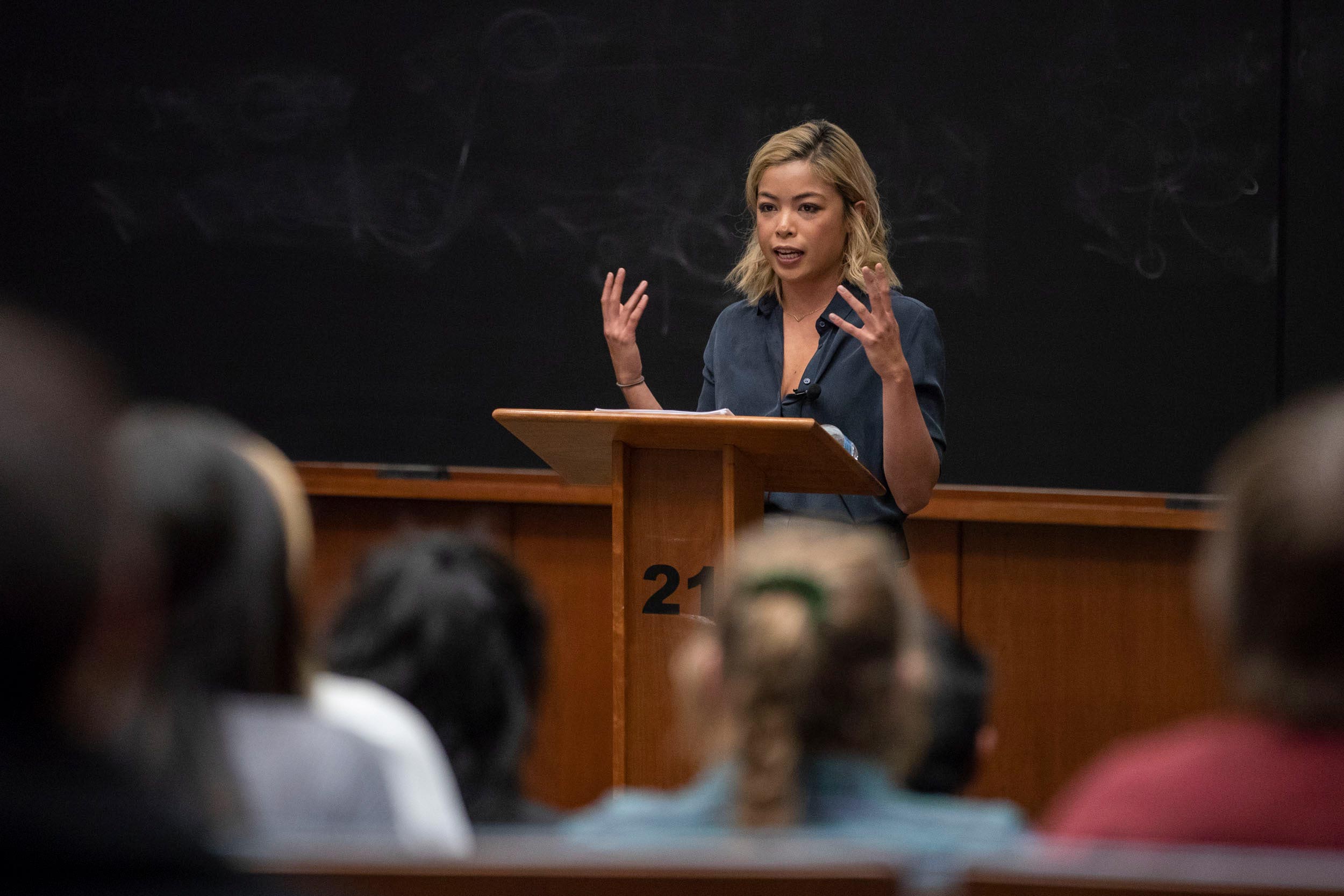 Alumna Jia Tolentino is a staff writer for The New Yorker. Her first book, the essay collection “Trick Mirror,” will publish in August. (Photo by Sanjay Suchak, University Communications)

Jia Tolentino has made a name for herself online, as a staff writer at The New Yorker writing about everything from youth vaping culture to Ovid.

She is also very worried about what the internet is doing to us all.

The University of Virginia graduate returned to Grounds Monday to give a talk: “The Internet Used to Be Good. What Happened?”

Her talk helped kickoff Humanities Week on Grounds, a student-led series of talks and events presented by UVA’s Institute of the Humanities and Global Cultures. This year’s theme is “Log In,” and each speaker is exploring how digital and social media affect our lives. (You can find a full schedule of Humanities Week events here.)

Tolentino, who graduated in 2009 with degrees in English and political and social thought, served in the Peace Corps in Kyrgyzstan after graduation, earned an M.F.A. in fiction at the University of Michigan, and became the deputy editor at Jezebel before joining The New Yorker. She will publish her first book, an essay collection called “Trick Mirror,” in August.

We spoke with her Tuesday to learn more about her work for The New Yorker, her thoughts on how the internet is affecting culture and politics, and her advice for students interested in journalism.

Q. You write on a huge variety of topics. How do you find your next subject?

A. It’s really nice to be able to write about so many different things, and I am really lucky to have the freedom to be so wide-ranging. It can be hard to keep up with the accelerating speed and demand of online writing. If I was only writing about politics, or only writing book reviews, I don’t think I would be able to write as well, as regularly as a I do.

So, I really prize, value and need to write about different things, and to write with different levels of seriousness. Mostly, I can write about whatever I am really thinking about or focused on. I tend to have tunnel vision. I think and write about something exclusively, and then when I file that story, I turn to the next thing.

Q. What are you fascinated by right now?

A. I have been thinking a lot about the internet, because of this talk at UVA and because of two great books: “How to Do Nothing: Resisting the Attention Economy,” by Jenny Odell, and “Digital Minimalism,” by Cal Newport.

Q. You discussed some of the harmful ways the internet affects our sense of self in your talk. What do you see as the most detrimental effect right now?

A. I am really worried about two things. First, I think an economy built around human identity is just a nightmare scenario. Every major tech platform monetizes something that should not readily be monetized – our identity and how we view ourselves – and it’s so corrosive.

In addition, these platforms retain our attention by escalating an emotional response, which usually means anger. Their ability to make a profit is tied to the need to trigger these heightened emotional responses in users, and that is destroying the civic fabric of our country.

Q. Do you try to push back against that harm when producing stories for the internet? How?

A. I think most people who work online have little ways that we work to undercut some of those effects, or write straight into the worst things about the medium that we work in. And there is an obvious hunger for that pushback. People still like to read longform stories; they like podcasts that required sustained attention; they want something with more substance.

Still, it feels a bit like plugging a tiny hole in a huge dam, because all of those online platforms – like Twitter or Facebook – can co-opt and profit from any resistance. Even if your critique is getting shared, it’s getting shared on the systems themselves.

Q. How do you moderate your own consumption of news and media?

A. In my personal life and online presence, I try to be as unprofessional as I can without being truly unprofessional. I show flaws online; I allow myself to be inconsistent. I use apps like Freedom to block websites or limit time I spend on them. Over the past month, I have blocked social media entirely for a piece I am writing, and that absence of constant noise has been pretty startling.

I have also been thinking a lot about how my attention span has changed since college. I graduated right before the smartphone. It’s concerning. I really prize my ability to focus. It is a precious gift that I would like to retain.

Q. How do you handle the backlash that comes with writing for a prominent online platform?

A. The worst harassment I got was at Jezebel, and I had many colleagues who had it much worse. Many of our politics reporters were Jewish, and got constant, insanely anti-Semitic harassment, or felt so threatened that they had to leave their homes. That has not happened to me yet, but I do get a lot of more casual harassment.

I have thick skin, which has helped me to handle things. I also know that real criticism – pointing out when I made a mistake – can and should hurt, and I can learn from it. I mute a lot of people on Twitter. If it’s a really bad comment, I might screenshot it and tweet it, just to diffuse the weight of it a bit. I try not to do that too much, because it gives them too much attention.

One thing I have been really frustrated by is how much less I have been harassed at the New Yorker. I would say it is about 90 percent less than at Jezebel, even though my writing did not change that much. It makes me furious that people change how they treat me based on their perceptions of a publication’s prestige.

Q. You said Monday that you worry about the future of journalism, even working at a publication like The New Yorker. How do you see the future of the field now?

A. I have rid myself of the compulsion to try to be certain about anything, so I see the future as a pretty opaque cloud and just try to operate on my principles as I can right now. For journalism, I think there has to be some sort of legislation or regulation to get ad revenue back from tech companies. There might also be a future in paid subscriptions, but not every outlet or location can do that. Right now, in the absence of that regulation, the future looks fairly bleak.

Q. What advice do you have for students hoping to follow a similar career path?

A. I talk to UVA students hoping to go into journalism all the time, and they are so driven, it’s amazing.

I have had an incredibly lucky career, and I did not even feel comfortable calling myself a writer until four or five years after I graduated. I gravitated to writing-heavy classes, but mostly I just wanted to see things, to explore things, to be someone who could go into many different situations and hang. That was so much more important to my eventual career, and that is my advice to students.

Journalism requires you to land in a situation, immediately make people comfortable talking to you and really get the measure of what is going on. You don’t have to have the perfect internship to get that experience – you can get it waiting tables.

I also remind them that the only pleasure you are guaranteed to get from writing is the pleasure you can generate for yourself while doing it. You can’t count on being read, on making an impact, on getting prestige or a great job. In lieu of that, you have to count on being able to write in a way that feels satisfying to you, and follow what you have pleasure in and what you have chemistry with. It took me a long time to be able to do that, but having that primary reward makes me feel stable in an unstable industry.

What Is Biotechnology? Where Is It Headed at UVA? END_OF_DOCUMENT_TOKEN_TO_BE_REPLACED