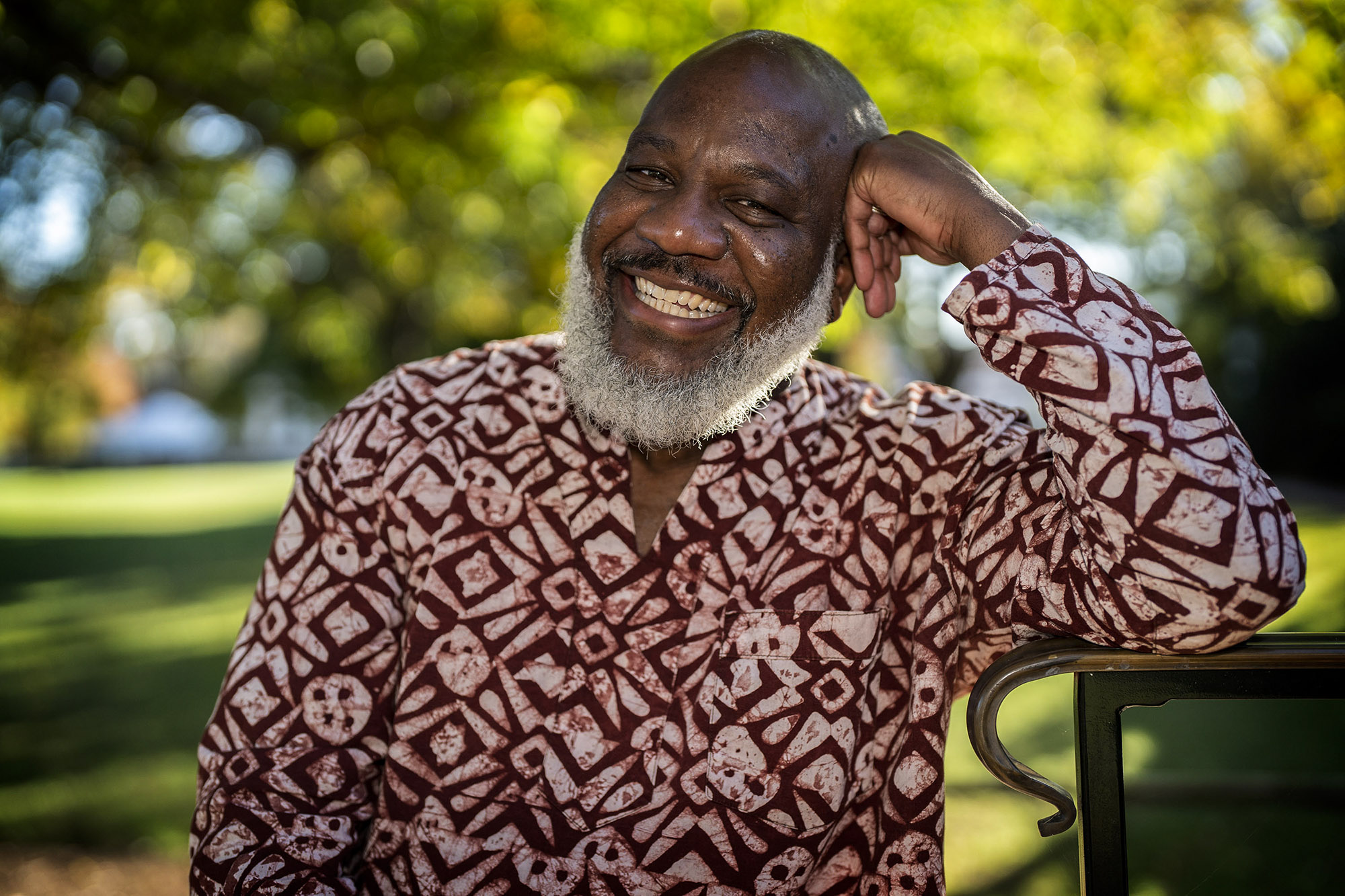 Four decades after it was founded as a center for African-American and African studies on Grounds, the University of Virginia’s Carter G. Woodson Institute is gearing up to celebrate its 40th anniversary with its new director and chair.

On Aug. 25, Professor of African and African American studies Robert Trent Vinson officially became the Woodson’s newest leader. A former professor of history and Africana studies at the College of William & Mary; current president of the Association for the Study of the Worldwide African Diaspora, the premier scholarly organization for scholars of African and African-diaspora studies; and a former Woodson fellow, Vinson has ambitious plans to give one of the nation’s leading centers for Black studies an even more prominent place on the world stage and in the local community.

UVA Today spoke with Vinson about the plans to celebrate the Woodson Institute’s past and his vision for its future.

Q. What attracted you to the leadership position with the Woodson?

A. That’s an easy question! So, I was actually a scholar in residence at the Woodson Institute, finishing up my dissertation at Howard University in the 1998-99 academic year, and it was one of the best years of my life. From that point on, I’ve felt a close connection with the Woodson. When I walk into Minor Hall, it brings me back to 1998 and the fellowship that I had with those graduate students, many of whom are still very close friends.

The Woodson name also played a part. Carter G. Woodson was a giant in African American history and education, and that was a big draw, but the intellectual community of the Woodson planted the seed. When the opportunity was there to come back, it was an easy call. This is one of the premier institutions of African and African-diaspora studies in the world, and being asked to direct it is the highest possible honor.

Q. As the newest director, what’s your vision for the future of Woodson community?

My vision for the Woodson is to continue that trajectory and to be truly global in how we think about Black studies – in who we hire, in the courses we teach, in the fellows that we invite to be part of our community, and in the books that we produce. I want to continue to grow our faculty, to continue to develop our curriculum offerings in African and African diaspora history and studies, and to expand our language programs – right now we have Swahili, and we want to expand to consider including others.

I also want to expand our study-abroad programming, which we already have in Cape Town and Ghana, but I want to continue to expand that into different parts of the Black world. So that’s my mission for curriculum and research, but I also want our students to have opportunities to experience the Black world in a global sense through classes and study-abroad programs, but also through ongoing local community initiatives and partnerships that we have that allow our students to not only be global, but also to be local.

I also want to be sure that we provide students with a supportive space, because we’re not just researchers and teachers; we’re human beings. So, part of that vision is to build our community, to take care of each other, to recognize the humanity in each other and to provide a space where we can be our best selves and thus be able to do our best work.

Black studies as a discipline is different from just about any other academic discipline, in the sense that it’s founded on activism. It was students in the 1960s, who were coming into university spaces and saying that it’s not just enough for us to make up the numbers and to be on the margins. We want to see ourselves represented. So, Black studies must speak to the needs of students, particularly those who still don’t see themselves represented on Grounds or in the classes they’re taking.

Q. Expanding on that vision, what are your thoughts on growing the reputation of the Woodson internationally?

A. The Woodson is certainly well known in the United States as one of the leading centers of African and African diaspora studies, and I want to continue to grow our global imprint so that folks in Africa, South America, the Caribbean and Europe know more about us, too. I think we’re making strides, and that’s reflected in the scholarship that we do and where our fellows are coming from. In our current cohort, for instance, we have scholars from Zimbabwe, Brazil and different parts of the Black world, and as we continue to expand where our fellows are coming from, it also expands our reputation.

We also want to expand and enhance that reputation locally. We want to be sure that we’re not so forward-looking that we lose sight of what’s right in front of us. Often there’s an uneasy tension between universities and local Black communities who don’t quite feel that the university is a space for them to access or to engage with, but the Woodson has a history of being involved in local history initiatives, like, for instance, our work with the Holsinger Collection – the work of Rufus Holsinger, who photographed Black people in the Charlottesville area during the Jim Crow era in a way that presented them with dignity and with pride and with ambition and hope. We did the initial work of excavating those photographs and exhibiting them.

We also work with the Morven summer program. The Morven site has been many things over the years, including a plantation, but now it’s now an educational space to recover and disseminate local African American histories. So, we’re partnering with them to have a co-taught course that our students will take advantage of and that will allow them to interact with local Black communities.

So we want to continue to build those local relationships. We don’t want to lose sight of the fact that there are people all around us who may be, and should be, interested in what we do ... if only we reach out and meet them on level ground.

Q. What are your research interests, and how will they inform the work you’ll do with the Woodson?

A. My work is focused primarily on 20th-century South African history. But the work does not look at just South Africa and how scholars have traditionally thought and written about South Africa – as if it were a sort of a nation-bounded container.

My first book was on the impact of African Americans and Afro-Caribbean people, particularly Marcus Garvey in South Africa, and what Black South Africans did with the imagery and ideas of African Americans. My work connects the histories of Black South Africans, Afro-Caribbeans and African Americans to show that they all had localized struggles, but also connections on a global level that suggest there are enough similarities in those localized struggles that there is a reason to come together and to seek partnership. So, much of my work is about navigating that tension between paying attention to specificities of the local, but also understanding that, historically, Black people have looked at the global for inspiration.

And so that research is about how Black people around the world have seen themselves not just as members of local communities, but as members of a larger global community, and so one thing we’ll be doing is changing the name of the Woodson Institute for African-American and African Studies to more explicitly recognize that the Black world is larger than just Africa and the African American diaspora.

Q. What are you most looking forward to in your first year as director of the Woodson?

A. The biggest thing is just being on Grounds, seeing my colleagues in person, bumping into them in Minor Hall, making new connections and making new friends. Meeting my fellow chairs and directors has been wonderful, too – getting to know them and why they chose leadership paths. It’s interesting to think about why people take on leadership roles, and I enjoy meeting people who have a sense of a larger collective purpose, who think outside of themselves and who know that their research is important and that their teaching is important, but also that there are other aspects of service. For me, I’ve done my scholarship, and I will continue to do my scholarship. It’s important, but it has to be about something more than me, and long after I’m off the scene, I want the Woodson as an institution to still be here and to be even bigger and better.

I also really value the mentorship part. Students and fellows ask questions that they don’t know the answers to simply because they haven’t been through the same process I’ve been through, and I’m hoping to share insights based on my own experience. I find that really gratifying. You’re investing in people and saying, “I’m making myself available to you. If you have questions, if you have something that you need, I’m in a position that I can help either by virtue of my position as director or simply by the fact that I’ve been a professor for the last 20 or so years, and I’ve picked up a few things along the way.”

Q. This is the 40th anniversary of the Woodson. How is the Woodson celebrating that milestone?

A. We’ll be making an announcement about our anniversary celebration soon, but I can say that it’s going to be a virtual event on Dec. 9 featuring a performance by the a capella group Sweet Honey in the Rock. It’s still kind of tricky to gather on Grounds, so we decided not to make this an in-person event, but we hope that will give more people the opportunity to participate.

Q. What have you learned about the Woodson community in your first weeks as director?

A. First of all, I understand that I have a steep learning curve. Every new chair or director has a steep learning curve, and your job is to climb that mountain as quickly as possible. Part of that is asking a lot of questions. In the process of asking those questions, I’ve learned a lot about how the institution runs, how people tend to work, what’s important and what’s not important.

That has been enjoyable – learning more and more and seeing what’s possible – but I’m seeing that it’s important to get the basics right, to leave in place 90% of what Deborah McDowell did because she was fabulous in the role.

Over her long, distinguished tenure leading the Woodson, Deborah operated in the spirit of the possible – making the most out of every opportunity, keeping her eyes on the prize, and supporting people and investing in each individual’s potential.

So, the first thing is to keep the trains moving down the track because the momentum is already there. We’ve got 40 years of good momentum. Then we can figure out what needs to be tweaked.

It’s Copperhead Season in Virginia. Here Is What You Need to Know END_OF_DOCUMENT_TOKEN_TO_BE_REPLACED

What’s Next for UVA’s Class of 2022? END_OF_DOCUMENT_TOKEN_TO_BE_REPLACED