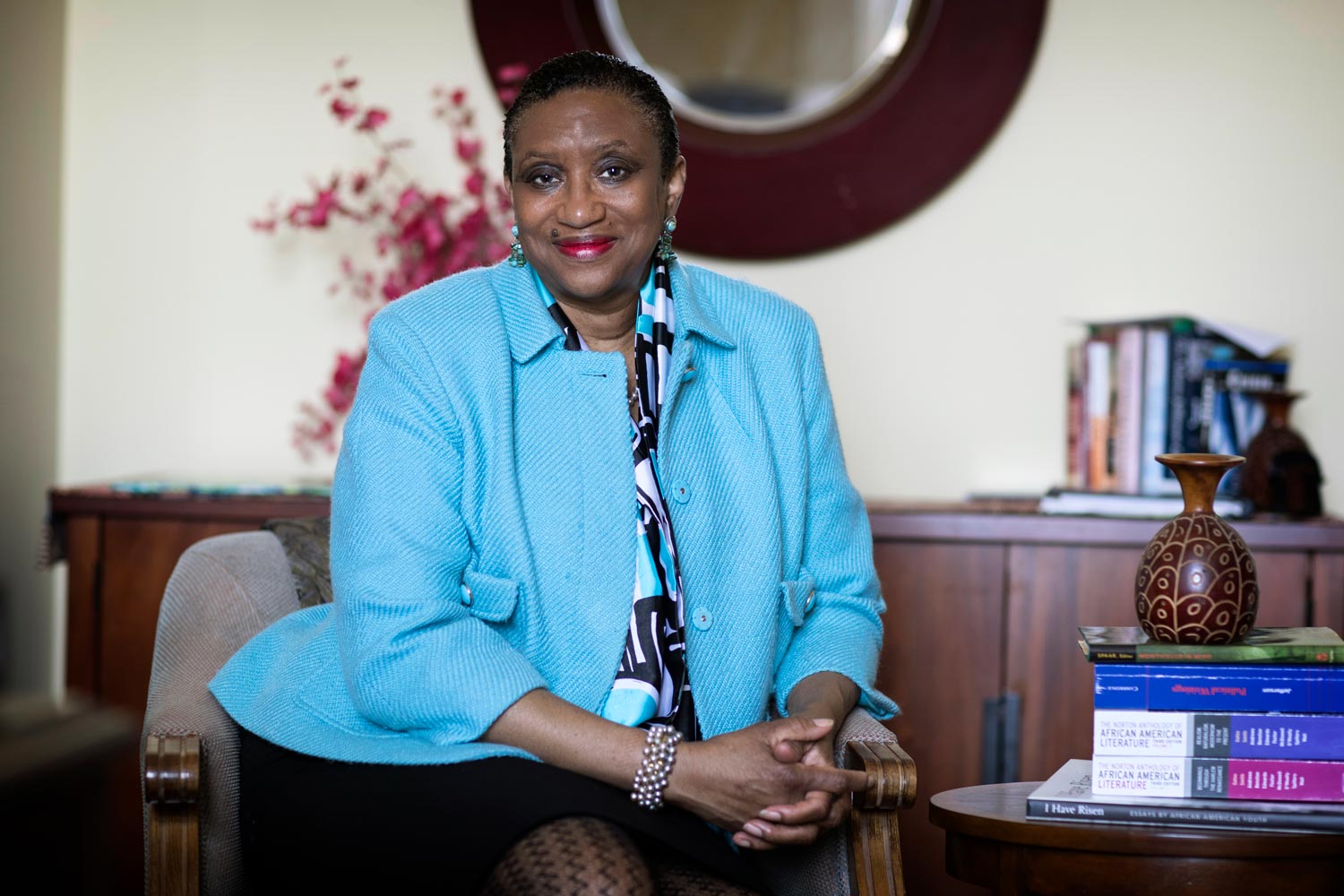 Deborah E. McDowell’s colleagues at the University of Virginia call her a “trailblazer,” note her collaborative activities and point to her commitment to diversify not only the faculty on Grounds, but throughout the nation. The University’s Maxine Platzer Lynn Women’s Center will give McDowell the 2018 Zintl Leadership Award this fall for these and other long-time efforts.

McDowell, who joined the English department faculty in fall 1987 and holds the Alice Griffin Professorship, has directed the Carter G. Woodson Institute for African-American and African Studies for the past 10 years. She has worked to elevate and expand African-American and African studies on Grounds through courses and programs for the University and surrounding communities. Under her leadership, the institute gained departmental status last spring, with the welcome support of Arts & Sciences Dean Ian Baucom.

Women’s Center Director Abigail Palko said, “The community recognizes the dedication and energy that blazing trails takes.” She said McDowell has been “an important connector between UVA and the Charlottesville community” and “has dedicated considerable attention to developing the talent among the Woodson Institute’s fellows.”

McDowell will be honored at a reception on Sept. 26. (To attend this event, email Carol Gilbert at ceg6a@virginia.edu.)

The Zintl Leadership Award annually honors a female UVA employee whose service surpasses job expectations and whose excellence in her work makes a direct and significant impact on the core academic enterprise of the University. The award’s namesake, Elizabeth Zintl, an accomplished writer and journalist who served as chief of staff to the UVA president, died in 1997.

Past Zintl Award recipients include Rachel Most, the College of Arts & Science’s associate dean for undergraduate academic programs and a professor of archaeology (2017); Pamela Norris, Frederick Tracey Morse Professor of Mechanical and Aerospace Engineering (2016); and Farzaneh Milani, chair of the Department of Middle Eastern and South Asian Languages and Cultures and also a professor in the Department of Women, Gender & Sexuality (2015). Sylvia Terry, former associate dean of African-American Affairs, now retired, received the first Zintl Award when it was established in 1998.

Associate professor of religious studies Cynthia Hoehler-Fatton, one of the colleagues who nominated McDowell for this award, served as the Woodson Institute’s associate director for five years.

“Deborah has blazed trails all her life,” Hoehler-Fatton said. “Growing up in a steel town in the segregated South, 10-year-old Deborah stood out as a precocious public speaker, winning ‘recitation’ competitions for which she memorized long literary passages and orations. The first member of her family to attend college, Deborah’s love of words and literature carried her through a B.A. in English at Tuskegee Institute and on to graduate school at Purdue University.”

Hoehler-Fatton noted that McDowell “has worked tirelessly to increase faculty diversity, promote inclusion and collaboration on programmatic and institutional levels, and enhance the institute’s outreach to the wider community.”

Today, the Woodson Institute includes 14 core faculty members, several of whom hold joint appointments in other departments, such as history and sociology. “This [number] represents more than a fourfold increase over the 10 years Deborah has been in charge,” Hoehler-Fatton said.

The institute also supports an average of 10 scholars from universities around the country for two-year, pre- or post-doctoral fellowships. They work on dissertations or book manuscripts, receiving expert feedback along the way, and some teach undergraduate courses.

Kwame Edwin Otu, who was born and raised in Ghana, came to UVA as a pre-doctoral fellow and now is an assistant professor here.

“My decision to stay at UVA,” he wrote in supporting McDowell’s award nomination, “was strongly informed by the desire to both share in and contribute to Professor McDowell’s vision and mission to open up spaces where minority faculty and students can grow and become just as distinguished and committed to critical inquiry.”

Another nominator, professor of anthropology Ellen Contini-Morava, said, “Deborah McDowell has made an impact that reaches well beyond the conventional expectations of a faculty member. From her editorial work to her engagement with high school students, she has nurtured the work of others and strived to create opportunities for those whose voices might not otherwise be heard. She has worked tirelessly to make the University of Virginia a more diverse and welcoming place for all of us.”

In addition to organizing or supporting a range of symposia and talks on topics such as mass incarceration, predatory lending, immigration, civil rights and black feminism, McDowell, along with others, offered “August in Perspective: Creative Responses to #Charlottesville,” in February as an artistic response to the events of Aug. 11 and 12, 2017, through theater, dance, music and art. UVA students and faculty, community members and local high-schoolers participated.

The institute also has partnered with the Albert and Shirley Small Special Collections Library, the Center for Digital Editing, the Scholars’ Lab and Virginia Humanities to create a digital archive of civil rights activist Julian Bond’s papers, launching the project with a special two-day transcription event Aug. 14 and 15. McDowell said she never dreamed it would be so successful – people are still working remotely on transcribing Bond’s work – and she has heard from participants that it felt good to do something constructive near the Aug. 11 and 12 anniversary.

Receiving the Zintl Award is “a very pleasant surprise,” McDowell said. She doesn’t take all the credit, however, pointing to the support and efforts of others on Grounds, especially mentioning the faculty members who’ve been affiliated with the Woodson Institute for many years. Her greatest honor and opportunity, she said, has been working with students, faculty and the Woodson Fellows.

A well-known writer, scholar and editor of African-American literature for both academic and general audiences, McDowell’s publications include the books, “Leaving Pipe Shop: Memories of Kin,” about growing up in Bessemer, Alabama (1997); “‘The Changing Same’: Studies in Fiction by African-American Women” (1994); and “The Punitive Turn: Race, Prisons Justice and Inequality,” co-edited with Claudrena Harold and Juan Battle; as well as many articles, book chapters and scholarly editions.

McDowell’s publications also include contributions to the University’s understanding of its own history. She wrote an introduction, “Higher Education for the Public Good,” for the 2017 book “The Key to the Door: Experiences of Early African American Students at the University of Virginia,” edited by Maurice Apprey, UVA’s dean of African-American affairs, and Shelli Poe, and published by University of Virginia Press.

Netflix to Add Ads. Why This Could Be a ‘Game-Changer’ for Your Viewing Experience END_OF_DOCUMENT_TOKEN_TO_BE_REPLACED

What’s Next for UVA’s Class of 2022? END_OF_DOCUMENT_TOKEN_TO_BE_REPLACED